We’re seated in a gorgeous living room in the sky, surrounded by floor-to-ceiling glass windows with a panoramic view of the city, sunshine streaming in. Tastefully decorated with framed vintage photography of Dior Bar Suits by Patrick Demarchelier above an all-white fireplace, grey stone walls, chic modern furnishings, Dior archive books leaning casually against one another, beautifully accented with fresh flowers and lush greenery, for a second, it feels like I’m in a quintessential Haussmann apartment in Paris. Surrounded by beautiful scents and engrossed in conversation with wonderful company in an evening of good food and wines, I almost forget that I’m actually at Singapore’s Salt Grill & Sky Bar, a recipient of a temporary makeover representing the French art de vivre, and the heritage of Christian Dior himself. 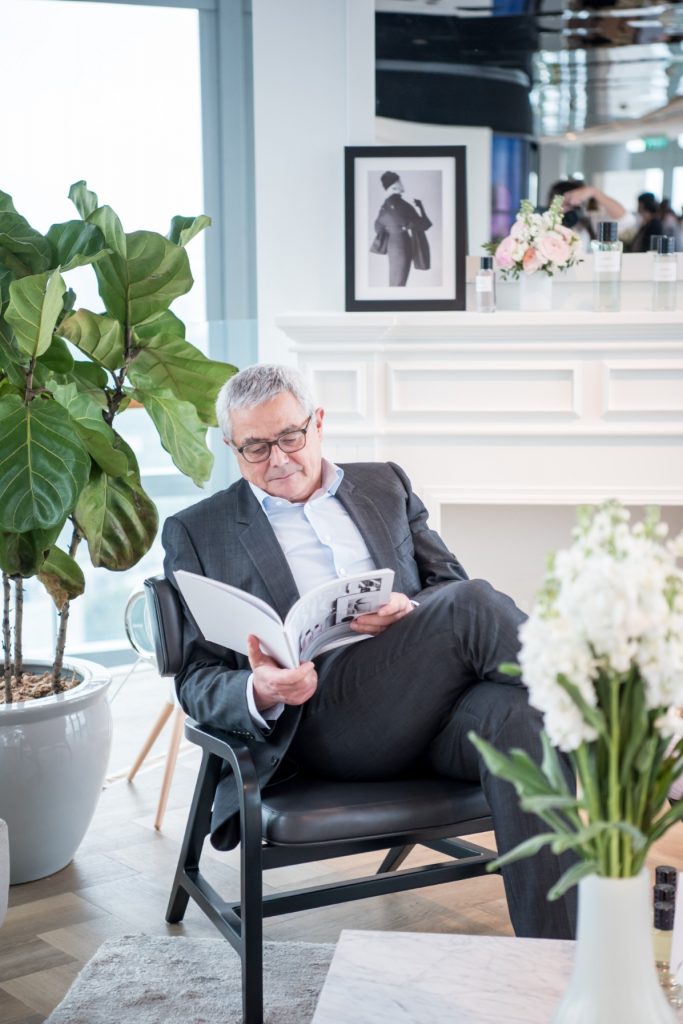 “You must always take risks if you want to keep a woman,” I check my phone to make sure that the words being uttered by Monsieur François Demachy, perfumer-creator of Parfums Christian Dior, was recorded. I make a mental note to replay said line to future girlfriends–and significant others–when dispensing invaluable relationship advice. “You have to also take your time when picking a fragrance (for a partner), and try not to be too influenced by all the different offerings available. If you really love that someone, it’s very hard to get it wrong.”

While patiently answering questions on the perfect art of gifting and the new direction of Maison Christian Dior–which seamlessly blends the worlds of beauty and lifestyle with candles, soaps, creams, Mitzah scarves, and fragrances–there’s an underlying current of passion that comes when Demachy speaks of the creation process of his scents. When pressed further, he chuckles, “Men are selfish, actually. In fact, I created a fragrance for my wife because it was a scent I liked to smell on her.”

The scent, while never released, is called Paulownia and named after a type of wood found in Japan. As a collector of Japanese furniture, Demachy explains that the wood is used primarily to make furniture that stores clothing–unsurprising, considering the fragrant characteristic of the wood that would attach itself to clothing, lightly scenting it. “The notes of the fragrance are woody, and because many women wear fragrances that have a floral scent, I wanted her to smell different,” Demachy elaborates. “The fragrance has a very strong character, just like her.” 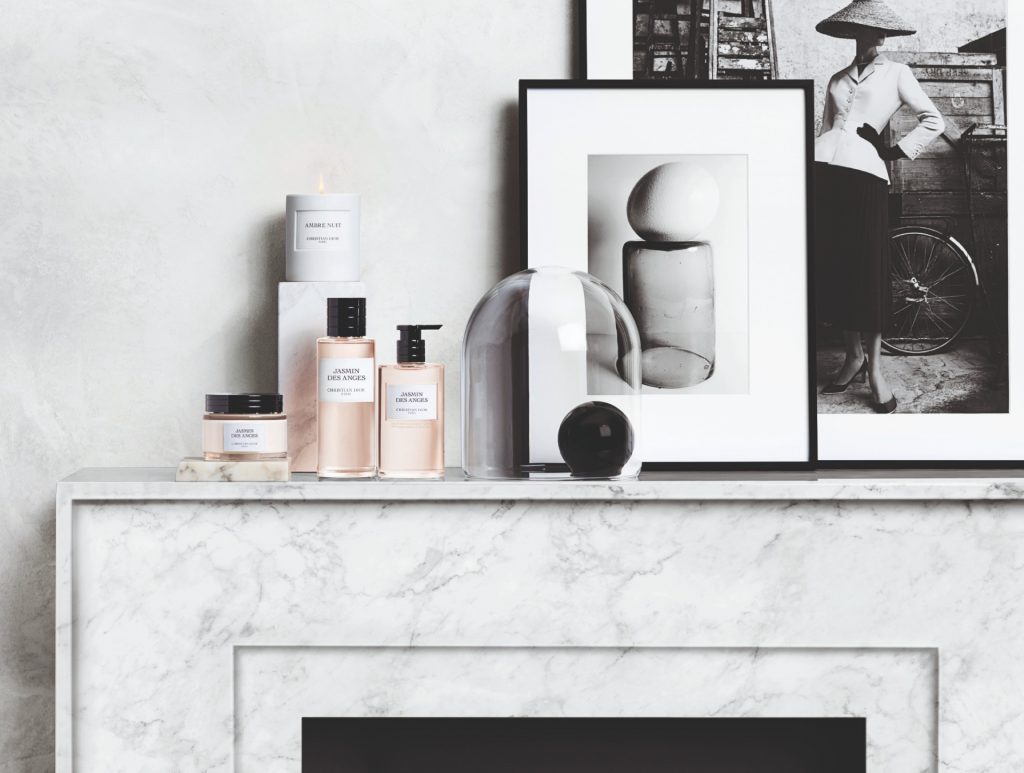 Scented candles, fragrances, and soaps for the home by Maison Christian Dior

A total romantic, I imagine it’s be impossible not to be, as Demachy’s scents are often derived from emotions rather than a place or a person. And it is apparent in the Maison Christian Dior range of perfumes, whether it’s the memory of visiting the flower fields in Grasse–the town in which Demachy grew up–in early autumn, found in Jasmin de Anges, a kiss at the nape of the neck in Souffle de Soie, or a juicy pear note that you can almost taste, like the unfolding of a sweet dessert, in Belle de Jour. And what about Dioramour? “A past experience, and we’ll leave it at that,” he says after a pensive moment, wistful. “The idea was to recreate what is left behind on the pillow, the morning after. So inspiration can come from anywhere, anything.”

And what a beautiful indulgence it is to be able to incorporate scent, a trigger for pleasant memories, in and around the house. “The idea is to build an object of desire,” Demachy says. “For example, with our candles, we chose porcelain manufacturers that could perfectly capture our vision of desire. We also carefully chose the best wax manufacturers to get the colour we liked.”

The Maison Christian Dior boutique is a gateway to Demachy’s fragrant world, and a natural continuation of La Collection Privée; only this time, the approach to perfume is broader, more generous than before. No longer “private”, it is open to a profusion of perfumed creations for the house. “It should be a part of you and part of the message you want to tell your visitors. That is the reason we made these perfumes.” 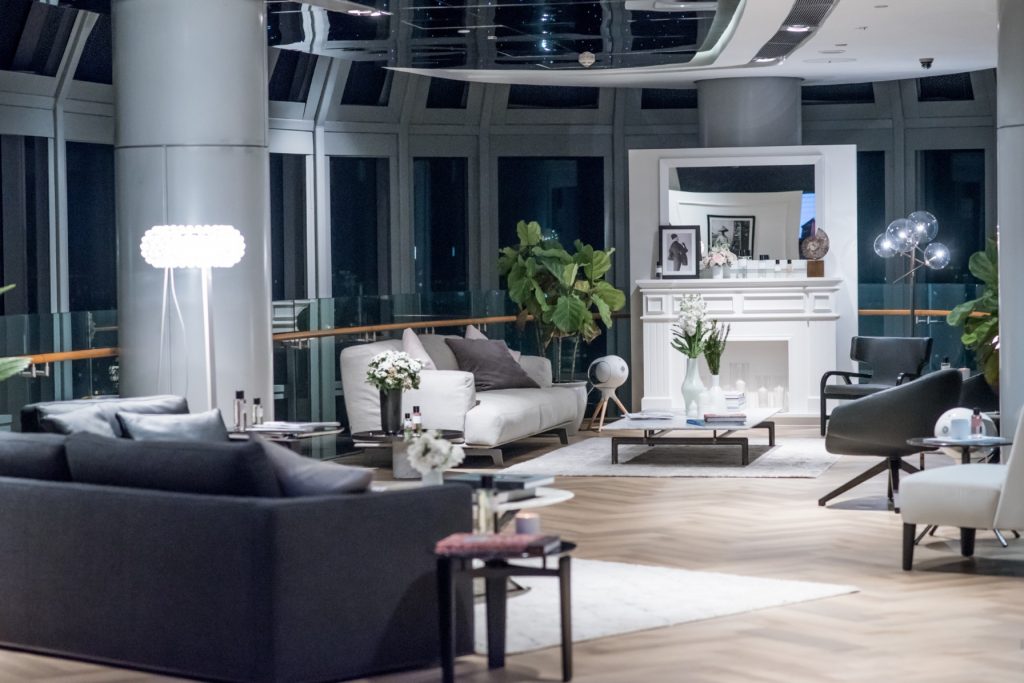 A snapshot of the quintessential Parisian art de vivre

But you won’t find the usual suspects à la J’adore and Miss Dior here. Instead, Maison Christian Dior is a state of mind, designed to introduce us to Demachy’s creations and a proposition to find the scent from over 26 signature perfumes (and counting), from florals to sensuals and orientals. “It’s true that fragrance can give you a clue of someone’s personality. You can use a fragrance to magnify yourself, or even use it as armour to hide behind,” he says. “Perfume is alive, and we are changing all the time, so at any specific point of time, whatever fragrance you pick might not work later a few years down. It’s all about trial and error.”

At the time of our interview, he is working on an exhibition–which I later discover is ‘Perfumes of China’ at Musée Cernushi in Paris–and he speaks of his olfactory discoveries of the techniques used in ancient China. “Looking into a different dynasty, I found a technique used in the olden days, which was applying fragrance to the hair. Some would even infuse fragrance into their daily intake of food and ingest them,” he says. “Based on the ancient texts that are displayed across the exhibition, by a week of practicing this method, your breath would smell like the fragrance. Within two weeks, your skin would smell like it. By three weeks, your bones. And in four to five weeks of ingesting the fragrance, your clothes will start to smell like it through your skin by sweat.”

While eye opening and certainly, quite hard to swallow, he emphasises that the only proof of this happening is in ancient texts, and has yet to be backed up by science. However, it is clear that the fascination with scents goes back to the beginning of time. I’m reminded of German spiritual teacher Eckhart Tolle’s anecdote of the first human’s recognition of beauty by way of flowers, and of their scents, too, I imagine, as being the bridge between “the world of physical forms and the formless”, like messengers from another realm. 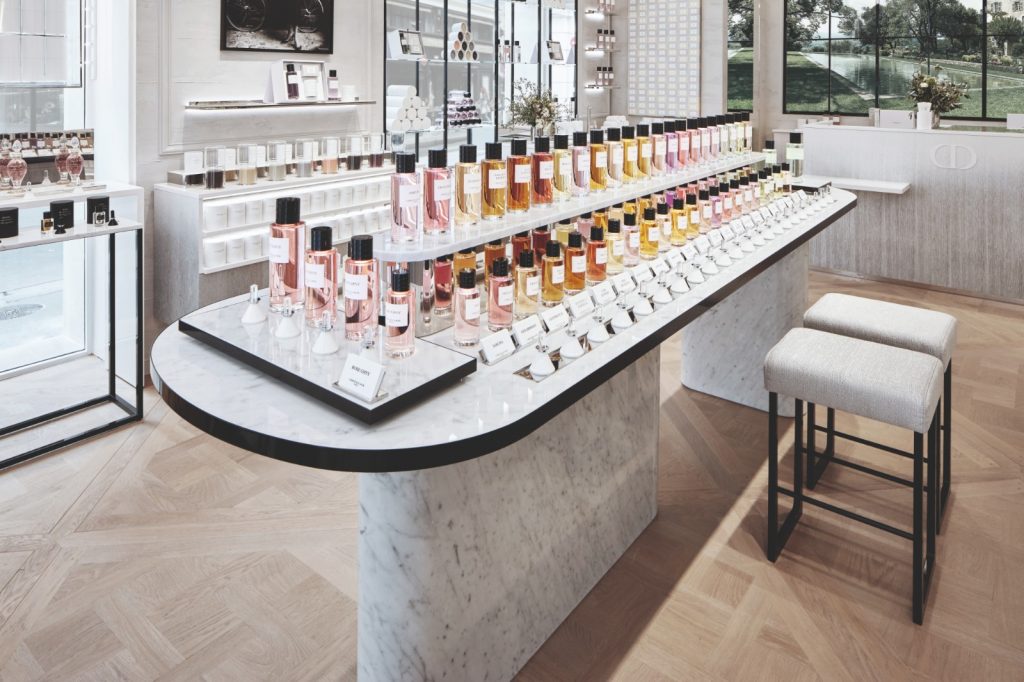 “There’s a saying in French that literally translates to, ‘I can’t smell them’, but it also means that you do not like them. This shows how important scent is to make someone memorable in the eyes of humans,” he says. “We are mammals, and sense of scent is what leads mammals.” What then, would be the best way for one to use scent to remain memorable in the eyes of a lover? “You should apply it on anywhere you would like to be kissed.” 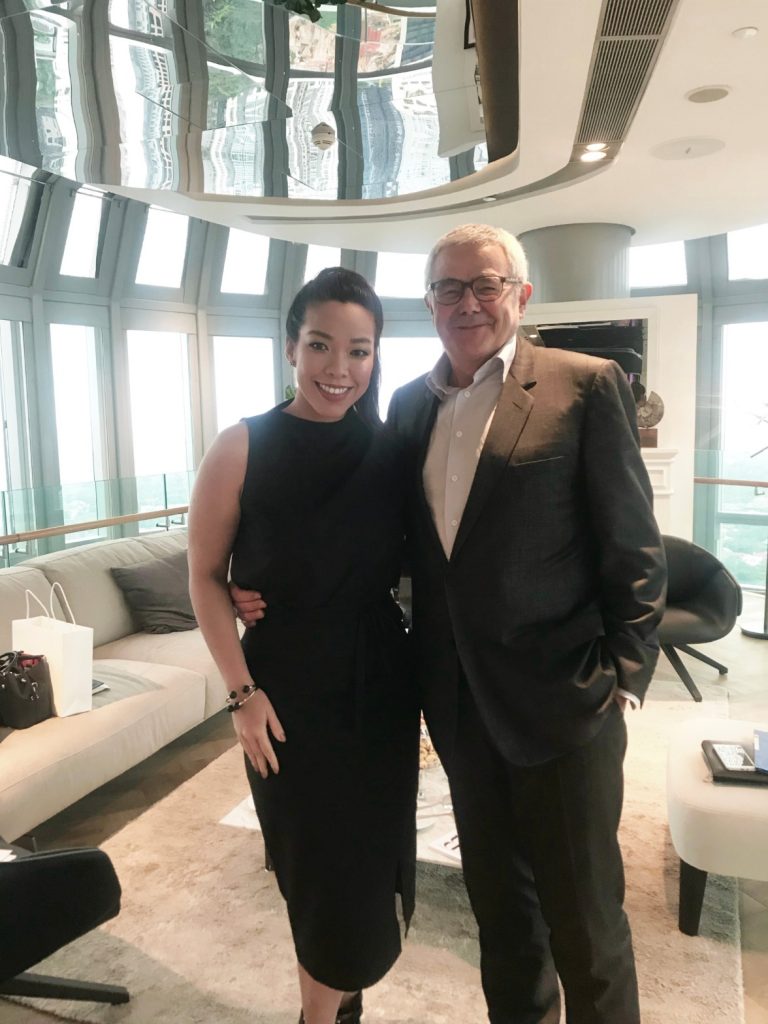 The Maison Christian Dior boutique is slatted to open on August 7 at 3.02.1A, Level 3, Pavilion KL.

It is said that Christian Dior was very superstitious and would stitch a stem of lily of the valley into the seam of his dresses for good luck. Forget four-leaf clovers and rabbit’s feet, a spritz of Lucky and the world is yours. 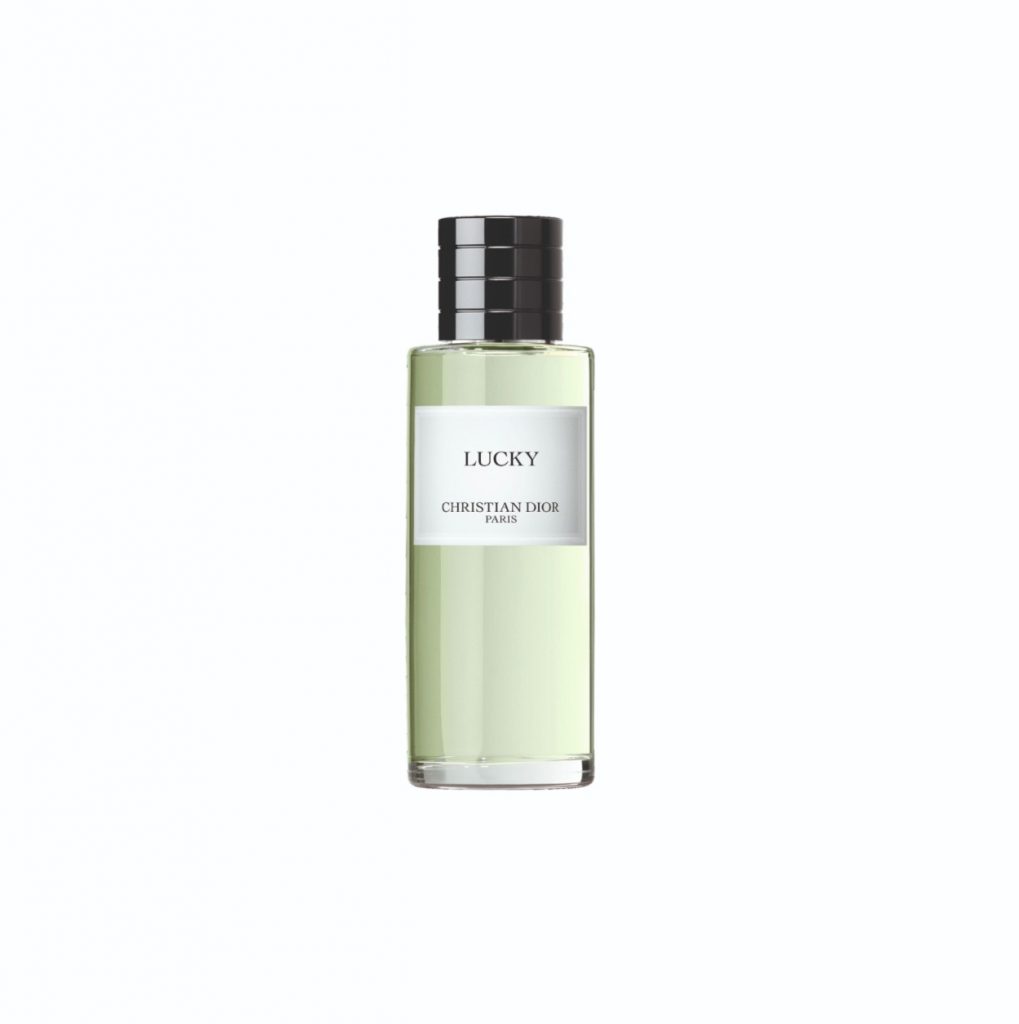