The retro-fabulous TWA Hotel, on site with John F. Kennedy Airport with spectacular views of Runway 4 Left/22 Right, really seems to have been created for an aesthete of another time. Originally built in 1962 as the Trans World Airlines Flight Center by Eero Saarinen, one of the masters of 20th-century American architecture, the historic landmark—now flanked by two new hotel wings—is a veritable design icon with its all-white gull-wing design contrasted with chilli-red interiors. This is where the glamour and romance of the Jet Age began; an era when stewardesses in their Pierre Balmain–designed uniforms and mod bobs would serve up sexy martinis before every transcontinental journey. No doubt when plans to relaunch the mid-century–modernist building as a 515-room hotel after a 20-year hiatus flew right into Nicolas Ghesquière’s design consciousness, the blueprint for Louis Vuitton Cruise ’20 collection was immediately sketched out … 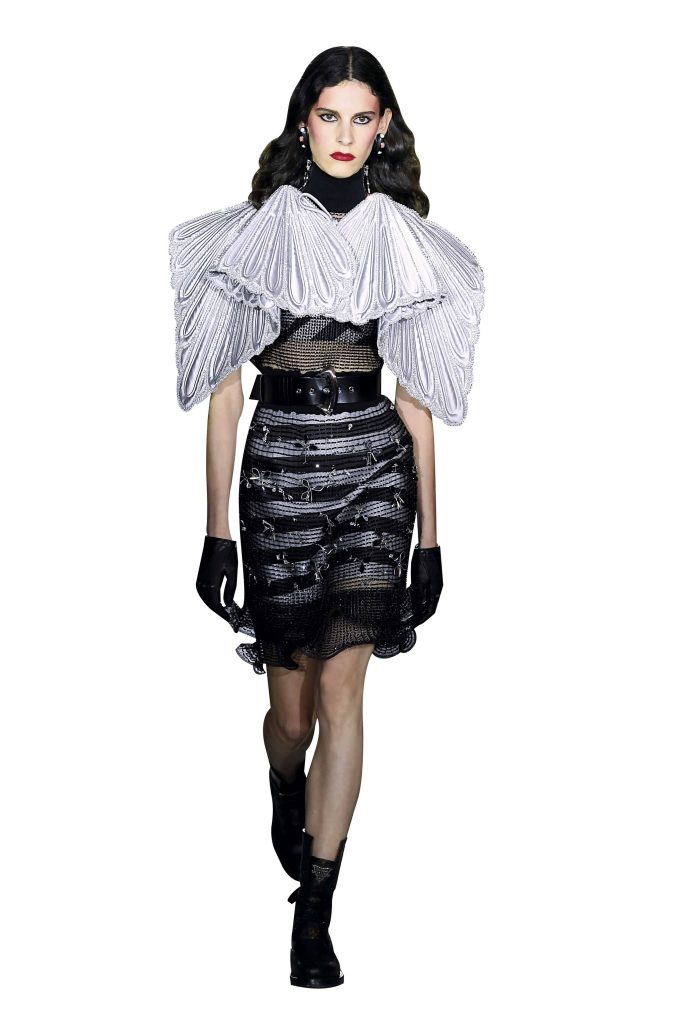 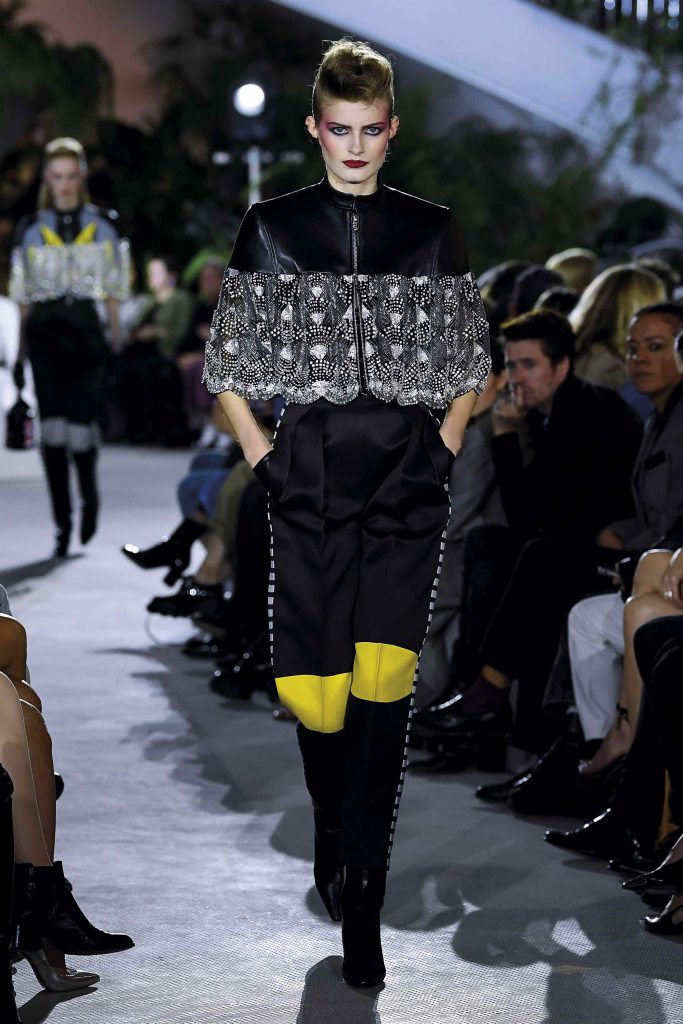 Hand-embroidered leather cape with a sleek cut-out in smooth lambskin. 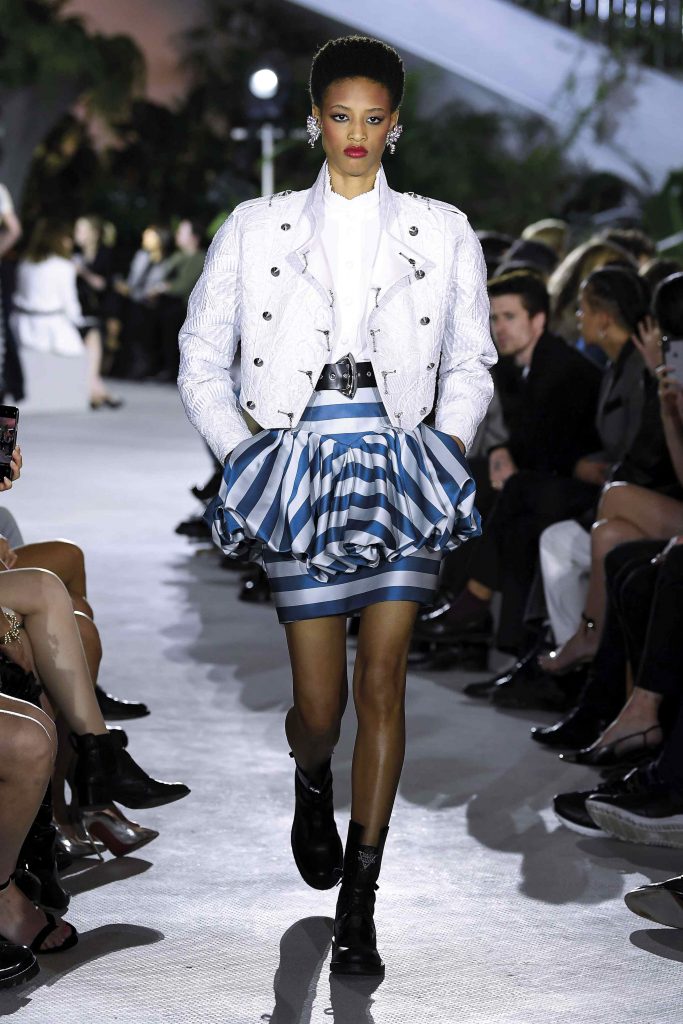 Stripes and bubble skirts in a nod to the Madonna ’80s. 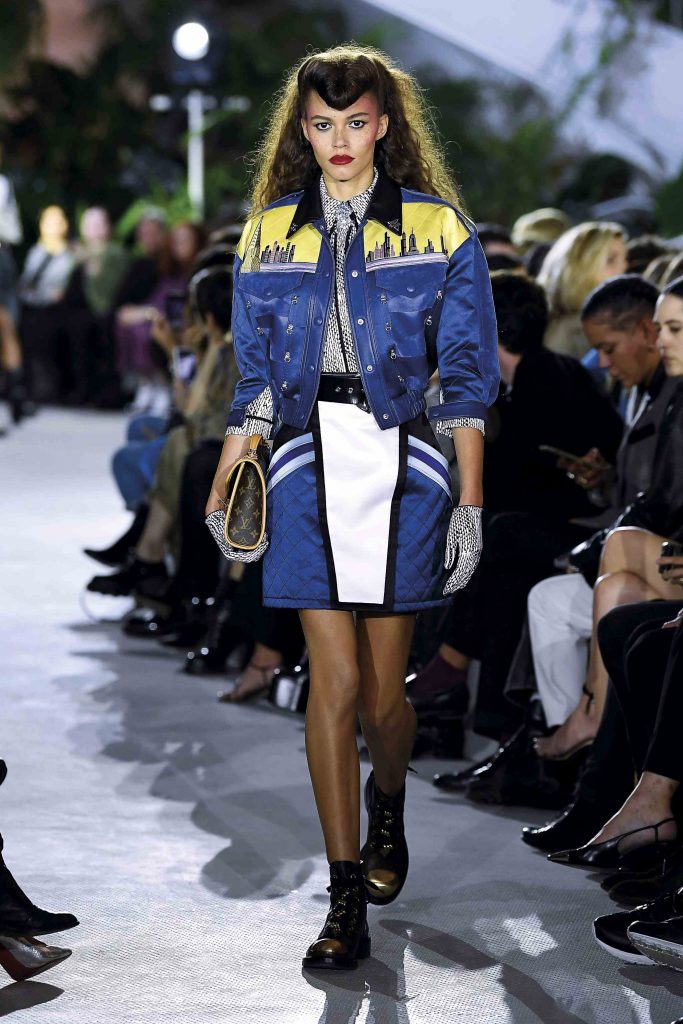 Legendary skylines were transposed as sophisticated prints on jackets. 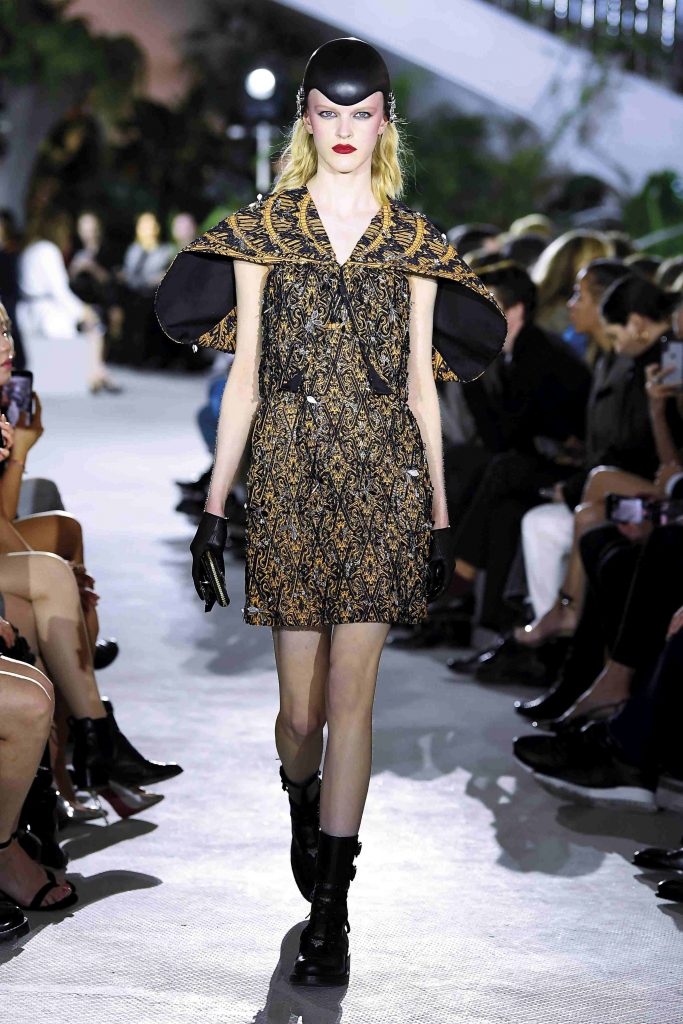 Vintage-style couture embroidery with a futuristic twist.It’s industry knowledge that Ghesquière is fashion’s biggest architecture buff, with a thing for neo-futurist structures. Always catching the moment on its cusp, he has staged his Cruise collections at the newly minted Niteròi Contemporary Art Museum designed by Oscar Niemeyer in Rio de Janeiro, the oculus-shaped Bob and Dolores Hope Estate in Palm Springs, and last year at the Fondation Maeght, a modern art museum overlooking—and in conceptual contrast to—the quaint village of Saint-Paul-de-Vence in the South of France. For more than the building, it’s also the location that adds to the frisson of the multi-references that Ghesquière is celebrated for, his innovative nature constantly nourished by street culture and community, history, and futurist energy, so alive in New York City.

He recalls his earlier trips to big city in the late ’90s, landing at the original TWA Flight Center, before it was transformed into the budget airline Terminal 5 in 2008. “It was something I could never forget. This place was forgotten for 20 years, and now has come back to life. It’s like a sanctuary that’s been revived and seeing it enchant anew in a different iteration, as a hotel, is a great pleasure,” said the artistic director who has been with Louis Vuitton since 2014. “It’s about rediscovering of an uncommon place that yet is a part of American heritage.”

Within that retro-urban archetype, Ghesquière literally mashed up everything iconically New York for Cruise ’20, like juicy bites from the Big Apple: its iconic skyline of spectacular Art Deco architecture, the uniforms of Wall Street, the energy of the city that never sleeps, the darkness of Gotham City contrasting the vivid landscapes of Downtown street art, all with touches of jet-set kitsch in keeping with the maison’s tagline “Art of Travel”. And, of course, Paris: the city of Louis Vuitton, as seen in the rock-meets-retro styling, couture detailing, and exquisite French chic. On the eve of the official opening of the TWA Hotel in May 2019, these eclectic—could we say, complex—creations cruised down the curved red-and-white walkways of the architectural statement, amid tropical greens evoking the idea of faraway travel, and extreme bright lights, of the big city. In the centre, an arrivals/departure board and sunken retro lounge, as the world weather report transmitted from the ’60s set the thrilling tone for this fashion journey.

Seamlessly fused with ingenuity and emotion, with no defining of an aesthetic era, out came leather superhero-inspired capes draped with crystal embroidery and worn with fencing-styled satin pants as the first order of the day. And yet there was quickly a strong ’80s slant, seen in blazer-length Blade Runner leathers, sharply tailored Wall Street pinstripes, and for tongue-in-cheek, souvenir-chic skyline embroidery on rockabilly jackets, sleeves scrunched up and worn with miniskirts to cue Desperately Seeking Susan. (On that, there were also Madonna-esque bubble skirts and conical bra tops). Ghesquière does love a strong shoulder and batwing sleeve—playing up his signature full volume vs skinny silhouette— wild iterations from circular-shoulder jackets to full billowing sleeves, and then the pièce de résistance, a strass-embroidered capelet that spread out like angel’s wings rising above a netted black dress embellished with LV fleurs.

The mighty Chrysler Building made many a motif, its crystal-and-metal crown as the metallic embroidery on a crop top worn with long leather jacket and midi skirt, almost Matrix-like. The bas-relief was interpreted as beautiful jacquards defining of the collection, on zip-front jackets and sculpted two-pieces angularly edged in white, playing on the swooping lines of Eero Saarinen’s neo-futurist lines. And again, the architectured lines in a dazzling black cape that truly brought the maison’s savoir-faire to the fore. In hand, the Speedy and Duffle prototype “Canvas of the Future” bags embedded with flexible LED screens with 1,920 x 1,440 resolution that connect with your smartphone—taking the skilled artisan’s hand of the heritage maison right into the future.

Sci-fi-meets-antiquity is Ghesquière’s forte; his take on fashion’s perpetual past-meets-future dialogue on duality, with a twist of comic book characterisation. Every diverse look, from urban to dystopian, had the power femme as protagonist, a little bit of Captain Marvel, some Catwoman black leather skullcaps, and combat boots for these female warriors to stomp back and forth across time, place, and concepts. This crafted diversity crescendoed at the end with a trip to the Far East with embroidered floral planels on pleated and puff-sleeved velvet, jostling with the black tech fabric on ’80s stirrup pants suffused with Orient-meets-Tech idiosyncrasy. If travel is a fashion truism, only Ghesquière could intellectualise all the clichés with this round-the-cosmos experience through this retro airport of the future.