The supermodel wore a piece from Gigi’s collab with Frankie’s Bikinis while out in Cannes.

Bella Hadid has supported her sister Gigi Hadid while reminding us that swimsuits can make the cutest tops.

The model and Kin Euphorics partner was spotted out leaving her hotel in Cannes yesterday, channeling summer in an all-white outfit. In pics, which you can see here, the star wears the Fawn Ruffle One-Piece Swimsuit from Gigi’s collaboration line with Frankie’s Bikinis as a top, pairing the piece with a belted, pleated ivory-toned miniskirt.

She accessorized the look with a lucite sandals, a brown top-handle bag by Prada, layered gold necklaces, and ’90s-style square sunglasses with rounded sides.

Gigi Hadid chose the same one-piece suit for the New York City launch event for her line last week. The model paired the blue version of the suit, which also includes a classic toile de Jouy print and a ruffle trim on the bust and straps, with a white collared crop top and a pair of low-slung cream trousers that gave the illusion of hip cutouts.

She finished the outfit with white kitten-heel slingback pumps from By Far, a bright blue Louis Vuitton clutch, and layered gold necklaces hanging under the crop top collar. 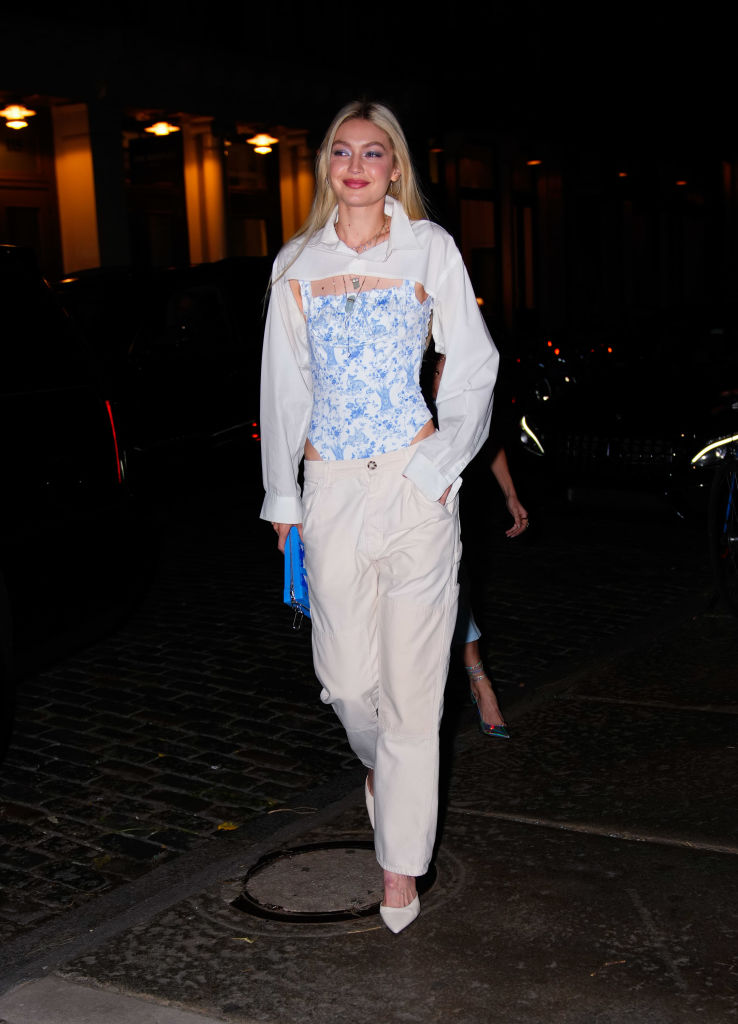 Bella reclaimed her throne as our queen of Cannes fashion this week, wearing several stunning vintage pieces. The looks so far have included a sleek strapless Versace gown, a princess-style Chanel piece and a minimalist Gucci gown. Though the model styles herself from day-to-day, she tapped her frequent collaborator, celeb stylist Law Roach, for her festival red-carpet looks.