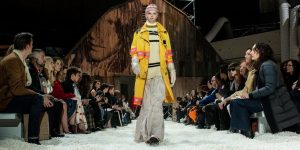 Last night, Raf Simons presented his Fall 2018 collection for Calvin Klein on a massive sea of popcorn at the former American Stock Exchange building. Both the show’s attendees (including an ultra star-studded front row) and the lineup of models walked ankle-deep in popcorn, but it was by no means a happy-go-lucky movie night theme.

Raf Simons has filled the entire floor of the pjs American Stock Exchange with popcorn for his @CalvinKlein show #NYFW pic.twitter.com/FGkuZauyjH

For his second season at Calvin Klein, Simons took a deeper (and darker) dive into the state of America. In his show notes, Simons described the U.S. with 50 keywords which included phrases like “firefighter,” “freedom” and “civil” immediately followed by “war.” The set was comprised of three run-down and seemingly burned barns that were covered in artwork by Andy Warhol. The sea of popcorn, as Fashionista points out, was perhaps meant to symbolize burned-down cornfields.

As if the set and collection didn’t offer up enough clues to the tone of the show, Simon & Garfunkel’s “The Sound of Silence” served as the soundtrack as models walked the popcorn-filled runway. The show then ended to a snippet of David Bowie’s “This Is Not America.” 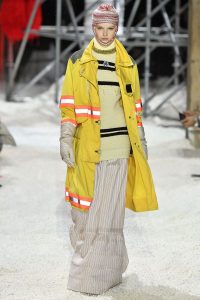 Offsetting the dark, thought-provoking theme of the show, however, was the bright and star-studded front row. Black Panther‘s Lupita Nyong’o and Michael B. Jordan sat next to each other while Big Little Lies stars Nicole Kidman and Laura Dern sat alongside Margot Robbie. Calvin Klein campaign stars A$AP Rocky and Millie Bobby Brown were also in attendance, adorably taking videos while sitting next to each other. 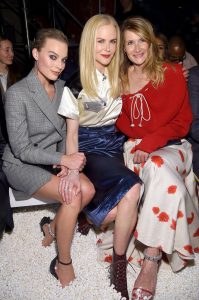