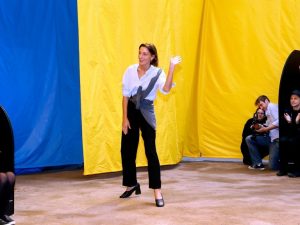 Phoebe Philo is leaving Céline after 10 years, it has been confirmed.

WWD reports that the autumn/winter 2018 show, which will be presented in March during Paris Fashion Week, will be the designer’s final collection for the brand. Before a new successor is found, the label will be designed by the Céline team “in keeping with the craftsmanship the house is renowned for”.

“Working with Céline has been an exceptional experience for me these last 10 years,” said Philo in a statement. “I am grateful to have worked with an incredibly talented and committed team and I would like to thank everyone along the way who has been part of the collaborations and conversations…it’s been amazing.”

The news follows months of rumours of Philo’s departure, which have also suggested that the designer might replace Christopher Bailey at Burberry.

Regardless, Philo’s tenure at Céline has been pivotal for the brand and indeed for the luxury market as a whole. Having hugely boosted the fortunes of the brand, which was a blank canvas before her arrival, she has influenced the wardrobe of millions with her unique brand of restrained elegance.

“What Phoebe has accomplished over the past 10 years represents a key chapter in the history of Céline,” said LVMH chairman and chief executive officer Bernard Arnault. “We are very grateful to Phoebe for having contributed to the great momentum of this maison. A new era of development for Céline will now start and I am extremely confident in the future success of this iconic maison.”