Imagine waking up to an e-mail sent by none other than Daisy Ridley (she of J.J. Abrams’s most recent Star Wars epic saga) at 7.30am, all blurry-eyed while your iPhone’s face recognition tried to detect a sense of familiarity through its 12MP lens. As surreal as it seems, that’s exactly what happened to me as I fell asleep not too long ago while our team in London wrapped up this March issue’s cover shoot. Call it the plight of a trans-continental collaborative effort, but such is the beauty of a borderless world these days.

While it had only been a few months since Star Wars: The Rise of Skywalker had showed in cinemas, the British actress’s portrayal of Rey has long left an indelible mark on the film industry. As the first Jedi heroine in the cult franchise, the 27-year-old actress has propelled herself into superstardom, as well as becoming the new face of feminism in the 21st century. For yours truly, it’s even more dream-like considering the fact that I had grown up watching the sci-fi epic as a child, but left many questions unanswered. Among them: “why were there hardly any female Jedis around?” It was a debate that legions of Star Wars female fans discussed, but it wasn’t until the arrival of Rey which changed that perception. 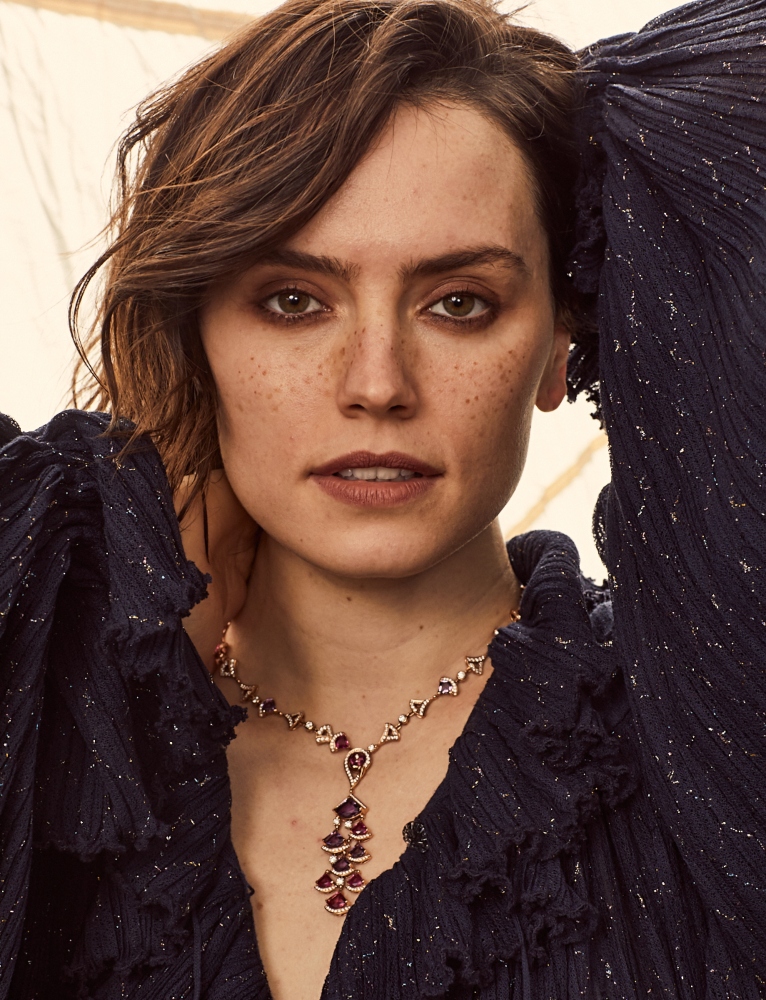 Cast from complete obscurity, Daisy Jazz Isobel Ridley, the youngest of five sisters, had suddenly been thrust into the spotlight, leaving her former days as a young actress making the rounds at a London pub (on minimum wage, no less) in a galaxy far, far away. After several years traversing the cosmos, the London native had proven to be more than just a lightsaber-wielding paladin—going on to star in the Claire McCarthy-directed Ophelia as the film’s titular role, as well as Mary Debenham in 2017’s Murder on the Orient Express by award-winning director, Kenneth Branagh.
It’s a testament to Daisy’s own multifaceted talent, of which she had evidently honed since childhood, I came to discover. In this exclusive interview, “The Talented Miss Ridley” shared (over the glorious invention that is the Internet) her most challenging obstacle on set, working alongside the late icon Carrie Fisher, abstinence from social media, and finally coming to terms with life after Star Wars. 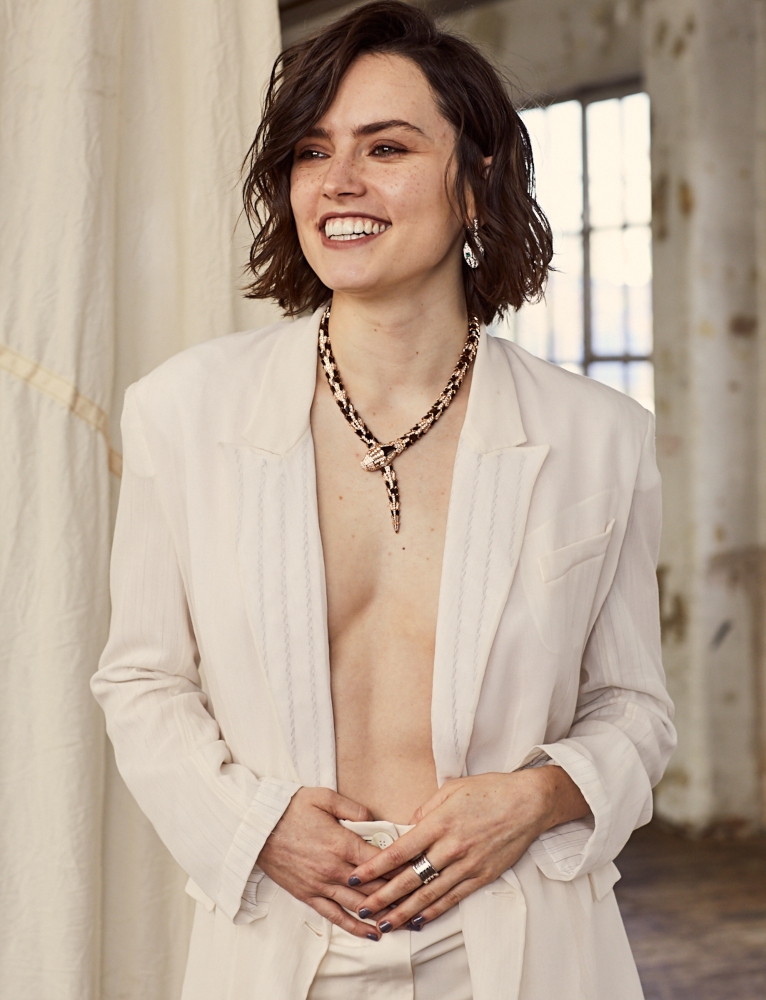 Your breakout role as Rey in Star Wars, has hailed you as a feminist icon in the realm of cinema.

What do you think about that, and how you’ve become an inspiration to other girls around the world?

“I feel incredibly grateful and lucky that I’ve been able to play Rey. It’s such a brilliant role in such an iconic universe, and to have been joined in each subsequent episode with more fantastic women has been really special.”

What has been the most important lesson you’ve learned from portraying Rey?

“I think the most important lesson I’ve learned from playing Rey is that the whole is greater than the sum of the parts! To work on such a massive production has made me aware of all the phenomenal work that every individual does on set, and in the film, Rey can only do what she does because of the support of her friends, and I think there’s a lot of beauty in that sentiment.” 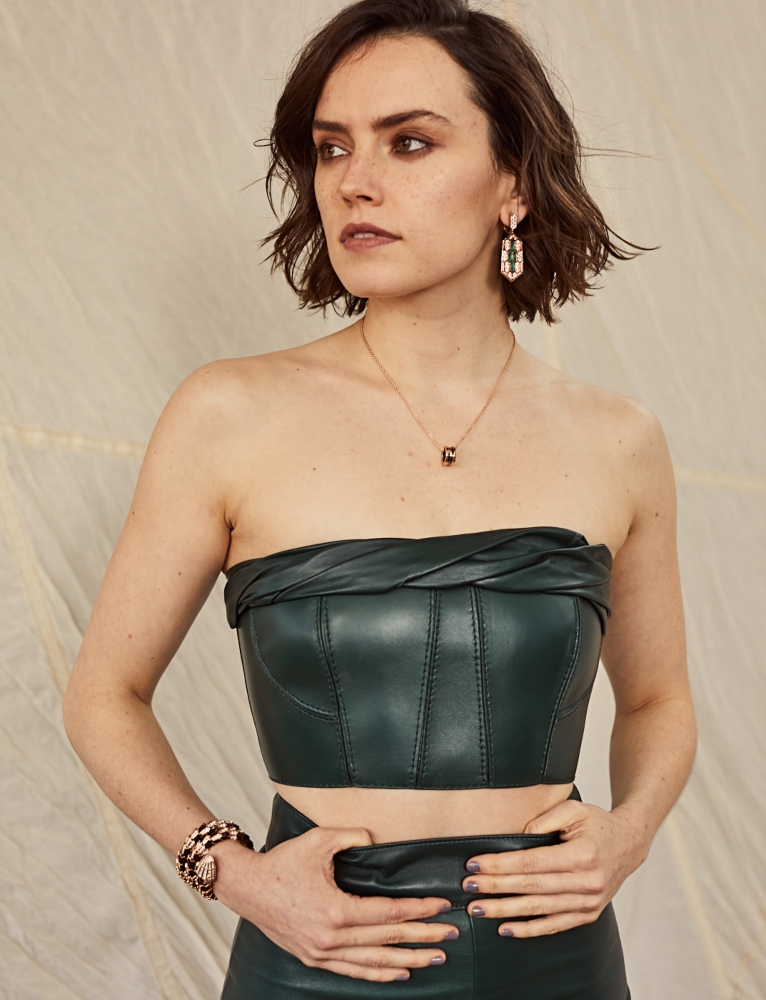 What was it like to have worked alongside the late Carrie Fisher, who was (and still is) such a huge feminist icon?

“It was amazing to work with Carrie, and especially emotional to see us back in scenes together in this film. She was an incredibly smart, hilarious woman, and to be around her and to see the impact she has had on people around the world was amazing.”

What has been the most challenging obstacle for you while filming Star Wars?

“For this last film particularly, really keeping myself going through an intense and lengthy filming process was the most tricky. It’s a testament to J.J. [Abrams] that if I felt I couldn’t get to an emotional place because I was so tired, he’d figure out a way to get me there.”

You’ve also starred as the female lead in Ophelia, as well as Mary Debenham in Murder on the Orient Express.

With such contrasting roles, what is your approach like when it comes to choosing film projects?

“I want to work with lovely people and have good filming experiences, so my main drive is the writing and then beyond that the people I will be surrounded by for the process.” 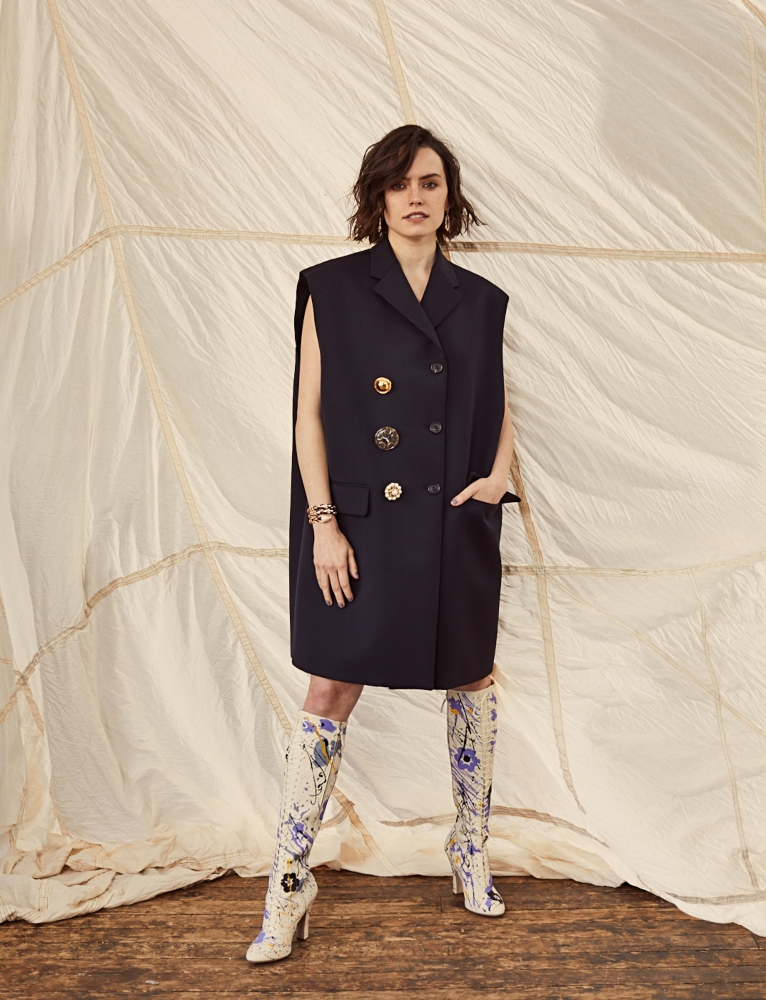 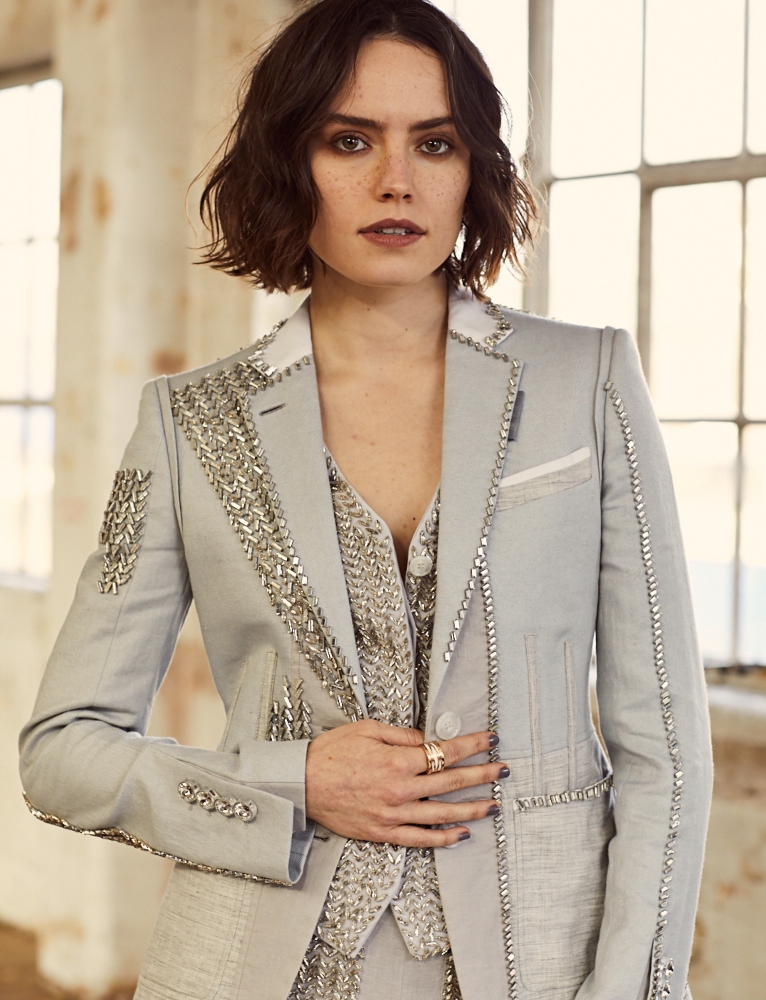 Blazer; waistcoat; and skirt, all from Burberry. B.zero1 ring, Bvlgari.

Apart from acting, you’ve also dabbled in other side projects, including the BAFTA-nominated documentary, The Eagle Huntress, of which you narrated and exec-produced.

Do you think projects like these, are something you’d be more inclined to explore in the future?

“I don’t by any means know, but I do think I know what feels good and what doesn’t with scripts. I am enjoying being part of conversations beyond acting; creative ideas and logistical thinking, but I can’t wait to get back on set again as an actor.”

How much do you think your life has changed since Star Wars has ended? Have you finally come to terms with it?

“January of this year was difficult, as I expected it would be. I have been all consumed with Star Wars for six years and letting that go has been wildly emotional. I have been supported so beautifully by the people around me on the journey, and am particularly grateful to have had John with me every step of the way since casting. We have had different individual paths, but there are moments when the only person that really gets it in a literal way is John [Boyega], and that has been such a blessing.”

Before you signed on as Rey, you were previously working in a London pub earning minimum wage. In fact, you mentioned on television you did “every job there was”,

including an elf in a shopping mall. Where do you think you cultivated this work ethic from?

“My mum has worked consistently since she left university. I am surrounded by people who work incredibly hard. And I like working! I like the feeling of having a purpose, I like being independent, and I now get to play around in fancy dress for work!”

Interestingly enough unlike most celebrities, you don’t indulge in social media.

Why do you think social media has had such a negative impact on our generation?

“I work in storytelling; connecting with people and communicating. I feel like people are losing the ability to do so because of constant phones in faces. Some people balance it very well, but I know from experience that it sucks my energy and focus, and these two are the very things I want to be up and in the world.”

You mentioned in an interview that you’re currently working on liking yourself, and feeling like where you needed to be.

How do you achieve that on a day-to-day basis, outside of acting?

“It isn’t always easy, and I definitely don’t always succeed, but I try! I try and do my best to enjoy the things that come my way, I try to be open with people around me so everyone is on the same page, and I am constantly aware of how lucky I am and don’t take that for granted. Everything isn’t rainbows all the time but I think the effort alone is good.” 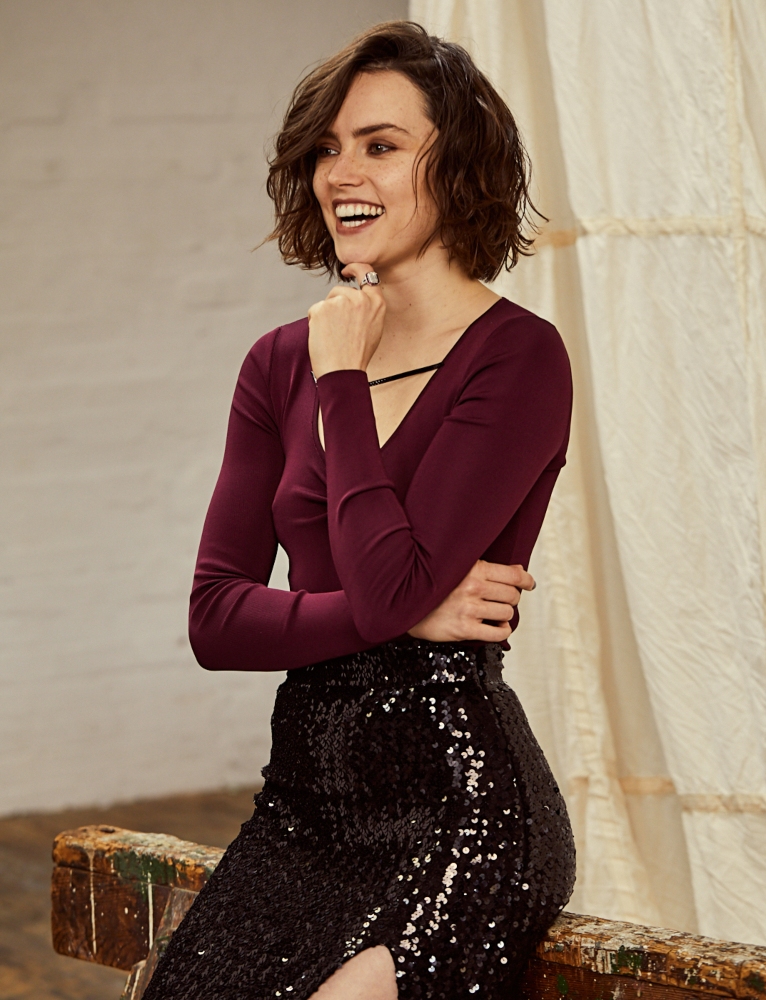 Top; and skirt, both from Gucci. High jewellery ring, Bvlgari.

How do you keep yourself grounded and centred, in light of all the successes you’ve achieved?

“I never thought it was me alone that did anything. I have been surrounded, personally and professionally, by the most brilliant people. Standing on the shoulders of giants!”

What’s next on the cards for you?

“I am really enjoying just resting but have been reading some brilliant books and scripts and am excited for things that are slowly coming together. I never like to jinx anything though, so until I am on the way to a shoot I can’t believe that it’s real.”