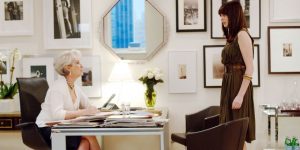 A new Instagram account detailing the horror stories of fashion assistants exposes the sometimes grim realities of the industry and the abusive power dynamics that exist within its walls.

@Fashionassistants was established in December 2017 and features the accounts of numerous fashion assistants who have allegedly been mistreated by their workplace seniors, be it designers or editors. A fashion assistant or intern is a junior role which involves helping organise photoshoots, ensuring that a magazine’s fashion cupboard is well-maintained and generally providing support to senior editors. It is largely an administrative position, but there is sometimes an opportunity to style and occasionally write. These roles are known for their long hours and low (if any) salaries.

The grim stories shared on @fashionassistants will resonate with anyone who has worked in fashion, who may have either heard of similar accounts or experienced them first hand. One post details how one fashion figurehead requires her staff to sleep in cupboards in the nights building up to catwalk shows, while another talks about how she didn’t feel she could take time off work after her father committed suicide. The issue of assistants and interns being too scared to take leave after a bereavement – or being punished for doing so – is a common theme across the account.

Other posts detail assistants being humiliated with cruel words, being hurled objects at by stylists in fits of fury, or suffering due to delayed or little payment. Another relays an experience of being forbidden to eat in an editor’s presence.

Hollywood’s #MeToo and #TimesUp campaigns have recently spilled over into the fashion industry. Over the last few months, numerous models have come forward detailing alleged sexual harassment against famed photographers including Mario Testino and Bruce Weber – both of whom have denied the claims.

But @fashionassistants reveals that the mistreatment goes beyond sexual harassment and misconduct; it is also verbal as well as physical, and often comes by way of powerful women exploiting their position in the face of young, inexperienced juniors desperate to please. Fashion is a competitive industry – if you don’t do whatever unrealistic demand has been placed on you, or bravely call someone out on unprofessional behaviour, there’s a lot of others who would gladly take your place. What’s more, such diva culture is often accepted, if not applauded as a demonstration of status.

It’s also a systemic issue – for a long time, there has been an established hierarchy in fashion. Many of those abusing their power now will have been on the receiving end of such treatment when they were younger, so they in turn believe that because they worked hard to be where they are, that others should have to do the same. There is also an absence of professional boundaries in fashion that enables such behaviour to continue. The stereotype of a hot-headed creative has for too long given those high up in the food chain impunity towards actions that would otherwise be seen as a clear HR issue.

Of course, it goes without saying that this behaviour by no means applies to all senior individuals and all fashion businesses. Many assistants will tell of positive, enriching experiences within their respective workplaces, where they’ve been treated fairly and allowed to learn and grow in a nurturing environment.

But sadly, The Devil Wears Prada dynamic will be all too real for many whom are part of the industry. However, as the Time’s Up and Me Too movements become louder, hopefully this toxic behaviour will become a thing of the past.