Fashion brands (at least the good ones) are informed by the zeitgeist. They cull the best from the worlds of cuisine, books, art, music, interiors, and beyond, and infuse that into their collections. They are magpies, creating distinctive nests—their boutiques and displays at retail outlets—that aim to captivate consumers and let them dream. But in the midst of an economic downturn as the result of the coronavirus outbreak, which has forced nonessential businesses to shutter, traffic at these spaces is nonexistent. So to provide the general public, who are quarantined in their homes, with their cultural fill, many are taking all these captured elements to their online platforms. 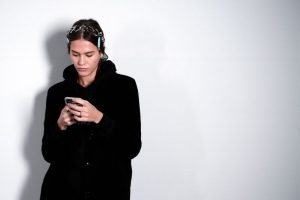 Some of the biggest labels have enlisted their contacts from disparate industries to provide entertainment and education in the form of videos, interviews, performances, and active audience participation. Admittedly, Netflix, Hulu, and other streaming services are at the top of our queues. But in between episodes of Tiger King and Little Fires Everywhere, we’re plugging into a podcast with a feminist painter, discovering the secret ingredient in a delectable recipe from a top chef, taking out our sketchbooks and re-creating beautiful images, and immersing ourselves in other enlightening programming that raises our spirits. And in these distressing times, everyone could use some of that.

In March, the storied French label, under the direction of creative director Maria Grazia Chiuri, instituted a podcast series dubbed Dior Talks. Here, host Katy Hessel interviews a series of feminist artists and curators, asking them about their lives, their work, and the journeys they took to become luminaries in the modern-day women’s rights movement.

Titled Prada Possible Conversations (a riff off Schiaparelli and Prada: Impossible Conversations, the Met’s Spring 2012 Costume Institute exhibition), the luxury Italian brand will host a series of one-on-one discussions on its Instagram account. The first is between Pamela Golbin and Alexander Fury and about fashion in the time of crises, which will go live on April 14 at 12 p.m.

In a program called McQueen Creators, the English designer label is unearthing images from its archives and asking its Instagram audience to reimagine them using materials found at home. It also launched a channel on Spotify that will feature music from its past fashion shows.

Spanning all its online platforms—Instagram, YouTube, Weibo, Line, Kakao, Spotify, Apple Music, and its website—the Italian label intends to showcase chefs, artists, writers, musicians, film directors, and designers in what it calls a “laboratory of creativity.”

In April, the eponymous designer hosted a chat with model Halima Aden on her brand’s Instagram account. Using #ToryStories, the brand will also be conducting Instagram takeovers centered around cooking, table settings, crafts, health, and wellness.

Under the helm of creative director Jonathan Anderson, the Spanish label has created Loewe en Casa, a digital initiative that highlights its collaborators and burgeoning creatives, including the finalist of its Loewe Foundation Craft Prize.

Jonathan Anderson, under his own namesake label, has launched JWQ&A, a series of chats hosted on the brand’s social media channels. Speakers will include Tyler Mitchell, Justin Vivian Bond, and Iris Law.

The luxury footwear brand has partnered with the Mental Health Foundation on a project called Smile, which is essentially a coloring book made up of the eponymous designer’s favorite sketches.

The French maison enlisted Belgian singer Angèle to stream a live performance on its Instagram account, encouraging the masses to stay at home.

The footwear label has launched Choo Sketch, an initiative that asks its audience to submit videos and drawings of shoe designs that it will then feature on its social media channels. The brand will then pick five of the most creative options and will produce them for a capsule collection, with all the profits going to an undisclosed charity.

The American designer has launched Our Flower Shop, an online enterprise that features six different types of floral arrangements rendered by Cohen. Moreover, viewers are able to purchase and personalize a bouquet, with 30 percent of the proceeds going toward an unspecified charitable organization.

The French label has launched #BalmainEnsemble, an initiative on its social media channels that will feature inspirational posts with yet-to-be-named friends and artists associated with the brand.

The American fashion brand is hosting a program on its Instagram called Happiest Hour. Every weekday at 5 p.m., influencers, models, stylists, celebrities, and other friends of the company will discuss how they are staying positive during this time.