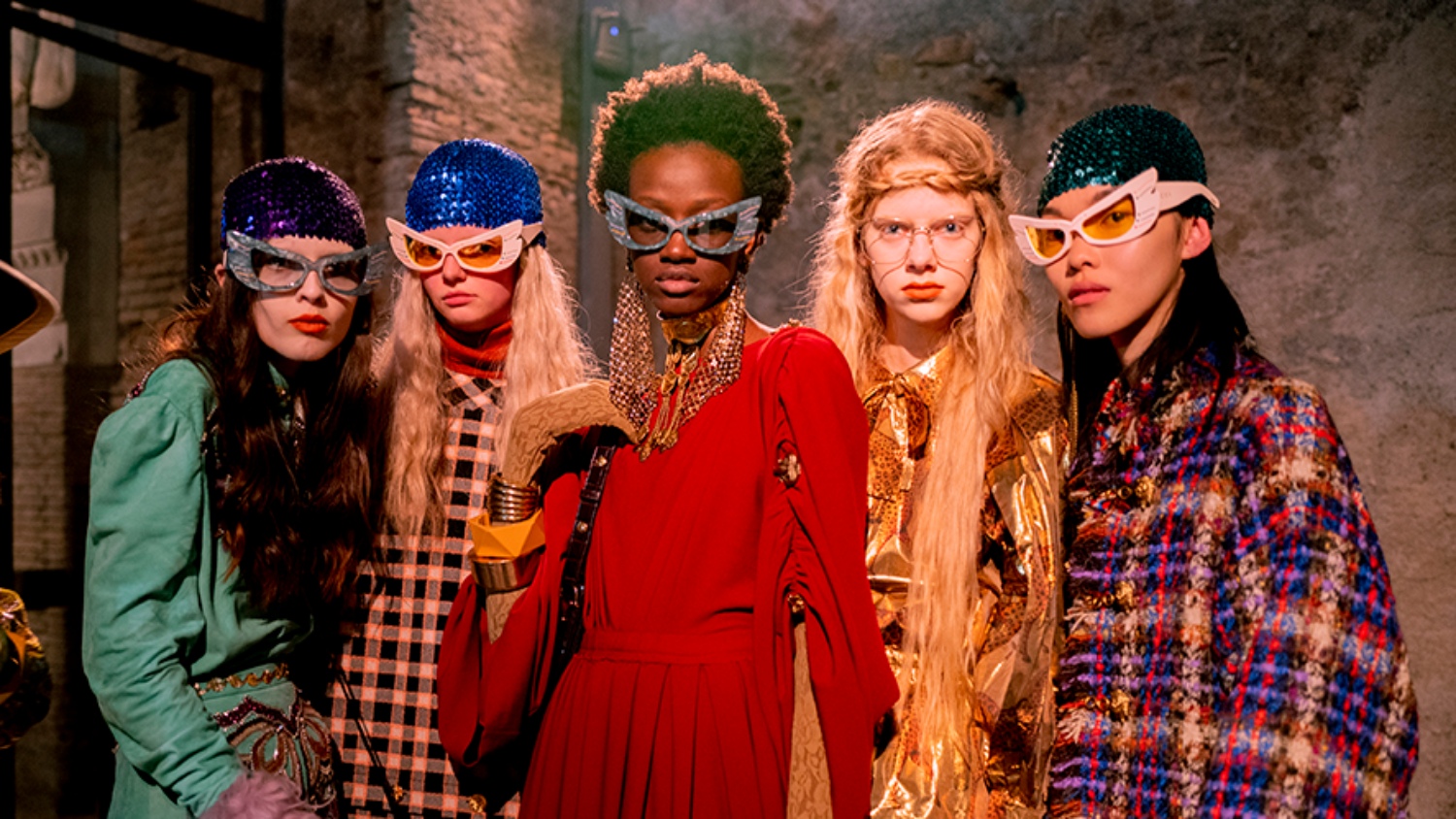 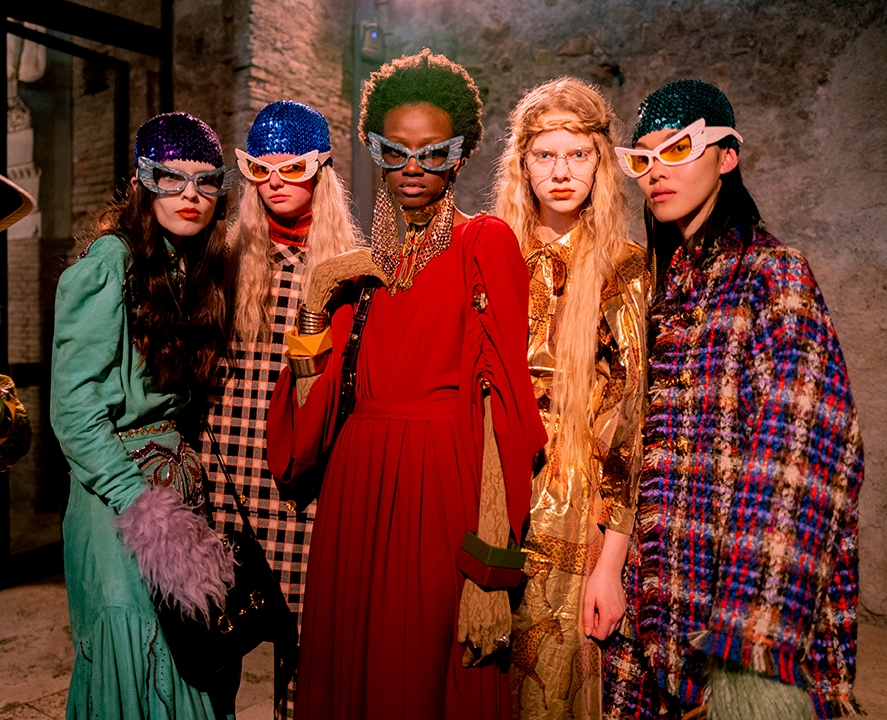 The Gucci Girls and their feminine mystique

The future, that auspicious 2020 is finally here; evidently on every designer’s consciousness when creating a collection that would define this millennia. By now the clichés of futuristic fashion would be fully played out—LED screens here, space-age boots there, and a whole lot of liquid metallic in the middle—bar Alessandro Michele who, always ahead of the curve, turned out his weird science inspired “Cyborg Manifesto” collection three seasons ago. With all that out of the way, he could focus on what he does best: the past. 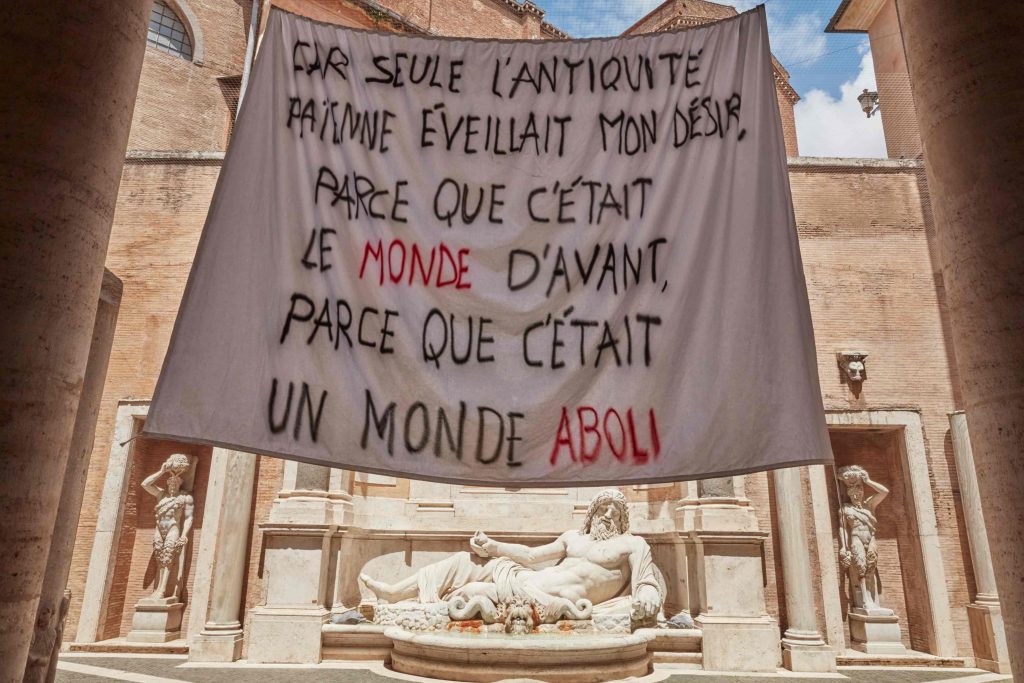 After all, to be completely philosophical about it, the future is the past, and on that dichotomy, Gucci’s creative director appropriated the words of French historian and archeologist Paul Veyne, Car seule l’antiquité païenne éveillat mon désir, parce que c’était le monde d’avant, parce que c’était un monde aboli, stamped in antique books that made the novel invitation to the Gucci Cruise 2020 show in Rome. These one-of-a-kind editions, hand-picked by Michele himself, were personally collected by his 300 guests the evening before the show at Antica Libreria Cascianelli, one of the oldest bookstores in Rome, and a treasure trove of rare books, antiques, prints and objets d’art.

“For only pagan antiquity awakens my desire, because it was the world before, because it was an abolished world,” read the neoclassical philosophy behind the collection, now graffitied on a cloth banner at the show venue, the Capitoline Museums, one of the oldest museum complexes in the world, conceived by Michelangelo in 1471. Inside, among centuries-old Roman bronzes and marble statues, the scene was set … but first, lights off. With phones in one hand and torchlights in the other, the collection was viewed through a chiaroscuro of light and shadows, through live characters and Roman deities, the visual contrast augmenting Michele’s genius leitmotif.

The oeuvre of 97 looks, expectedly eclectic and individual, opened with an arresting pagan goddess in all-black, from her mighty feathered headdress to silk faille ensemble worn with black lace gloves, immediately deviated by a gawky male in a flesh-toned toga. Flash to look three and there was Michele’s signature art nouveau embellished tiered skirt zuzzed up with Mickey Mouse print tank, complete with 70s braids and tattoos. As quickly switching one into the next, out came the checked coats, tartan dresses, and tweed suits, heavily embroidered maxis and velvet flares, Mickey prints on sweaters and canvas skirts … all dizzyingly accessorized with massive diamante jewellery, guitar cases, retro specs, and the bags du jour from the tri-coloured pyramid, to the multicoloured GG bucket and the Gucci 1955 Horsebit bag. Amid the platform pumps pageantry, a message was to be said.

“My Body My Choice” emblazoned on the back of an indigo jacquard jacket, motif of a uterus embroidered, pink blooms for ovaries, on a Fortuny-pleated silk dress, and 22.05.1978 printed on a black capelet – the date abortion was legalized in Italy – made a resounding dialogue on reproductive rights. “Women have to be respected and should be free to choose what they want,” Michele said in a statement, the collection opening that dialogue together with his prevailing visions for diversity and inclusivity. These, and the equally important 1.6 million euro contribution to the restoration and conservation of the Belvedere Garden at Villa Tarpea as well as the green landscape of Capitoline Hill. Ultimately fashion’s contribution to social change has become the biggest movement forward. Alessandro Michele’s provocative collections are not just intellectually and socially explorative, but also re-examines our own ideas and attitudes about the future of our world.

Antique-inspired piece embroidered in the spirit of savoir-faire

Fashion|People
A masterpiece 230 hours in the making.