Harry Styles has long been the unofficial poster child for Gucci’s floral and printed suits (Exhibit A). So it only makes sense that the fashion house is now making things official by casting the singer and style muse in its Fall 2018 men’s tailoring campaign.

The new ads, which were photographed in North London by Glen Luchford, feature Styles in a variety of tailored Gucci looks–from three-piece suits to a mohair jacket to a suit adorned with New York Yankees patches. And just in case the vision of the singer in the Alessandro Michele-designed suiting wasn’t swoon-worthy enough, he also stars alongside a group of dogs and pet chickens. 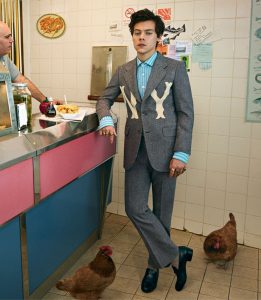 Along with the photo campaign, Gucci blessed us all with a video which features Styles bringing his pet chicken to a fish and chip shop for a casual bite to eat, as you do.

Here is Harry feeding a group of dogs some fish and chips in a printed three-piece suit and diamond “Guccy” brooch. 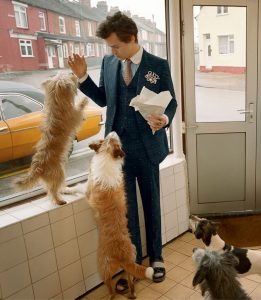 And here he is cradling a very lucky chicken in his many Gucci rings and floral embroidered jacket. 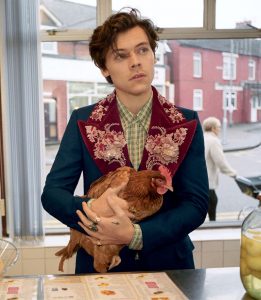 Despite the style icon’s many Gucci-designed looks over the year (including his last world tour which featured custom pieces designed by Alessandro Michele), this surprisingly marks his first official campaign for the brand. And something tells us it probably won’t be his last. 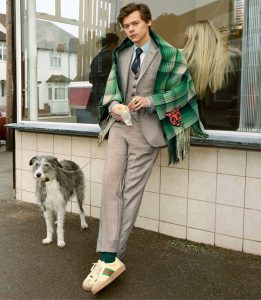