Paris Couture Week always offers an array of swoon-worthy gowns to lust over. But yesterday, Dutch designer Iris van Herpen lit up the runway with a little more than just artful dresses. 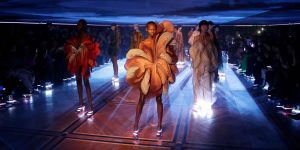 Inspired by celestial maps, astrology, and outer space galaxies, the designer tapped into a futuristic world defined by 3-D printed face jewelry and glow-in-the-dark heels. The latter made for an epic grand finale at the brand’s Spring 2019 Haute Couture show.

Iris van Herpen is one of my favourite designers. And after yesterday’s show, I want a pair of these shoes: https://t.co/tSSEeXFMmN pic.twitter.com/XlSGZB4Ns3

Standing out as the pièce de résistance of the galactic-infused collection was a sea of transparent plexiglass heels that lit up in the dark. According to Times reporter Elizabeth Patton, the shoes took a total of four days to create and were infused with two colors of ink, then carved by hand into undulating curves. The end result is a glowing heel reminiscent of the light-up sneakers you begged your parents for as a kid. 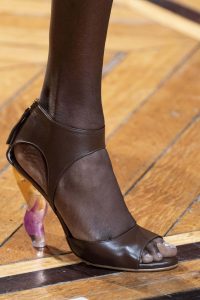 Along with the glow-in-the-dark heels, the collection’s dresses looked to other cosmic forces as sources of inspiration. A series of voluminous, cloud-esque gowns were inspired by artist Kim Keever, a former NASA engineer whose work merges painting with photography. 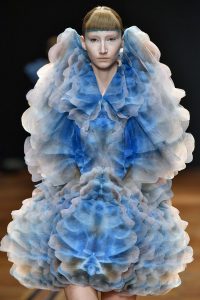 Other sculpturally-shaped looks offered a similar effect, featuring 3-D lasercut detailing meant to give the illusion of mythological creatures. During a time when most designers are looking to previous decades for inspiration, van Herpen is looking onward to new galaxies. 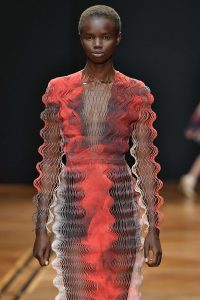