Everything you need to know to help you find that perfect timepiece. 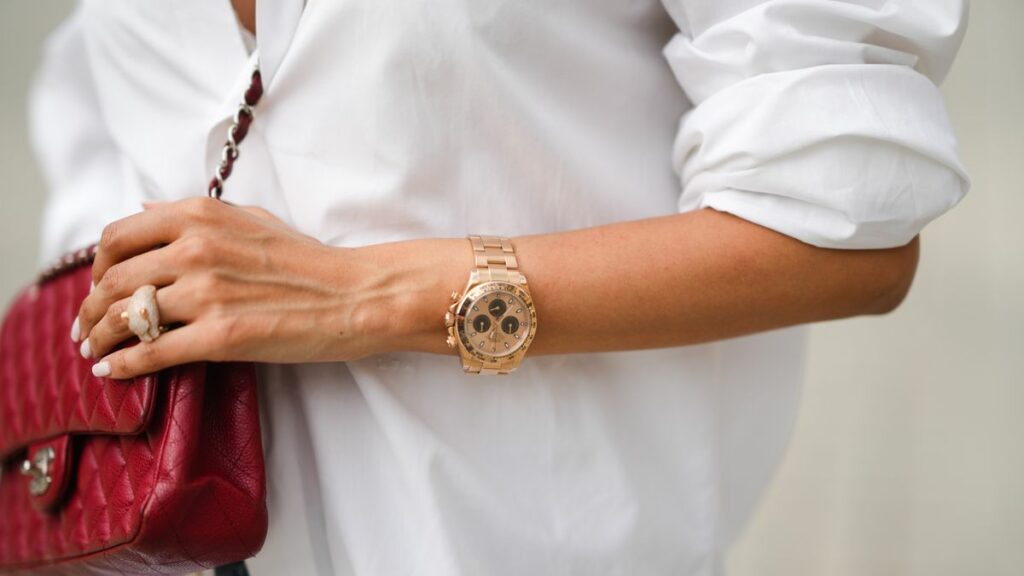 Ah, horology. A fascinating world, filled with incredible craftsmanship, compelling history and fabulous style. I mean, which other industry can claim links with the space race, the Olympics, horse racing and the dizzying heights of couture? But it’s also a potentially confusing place, with myriad models available and plenty of obscure jargon that can get in the way when you’re looking for a timepiece to treasure (what exactly is a chronograph? And do you really need one?). Whether you’re after a fun fashion piece or a watch that will eventually become an heirloom, we’ve got all the facts you need to know if you’re considering investing in one right now.

PICK SOMETHING YOU LOVE

For seasoned watch journalist Ming Liu, what you end up buying isn’t as important as why you’re buying it. “There are people who collect watches as pure investments; things to stick in a safe and sell later, and that’s fine,” she says. “But for me, a beautiful watch is so much more than that. It’s something you can wear forever and pass on to your kids, so you should pick one you really love, irrespective of trends or what other people like. It has to bring you joy.” 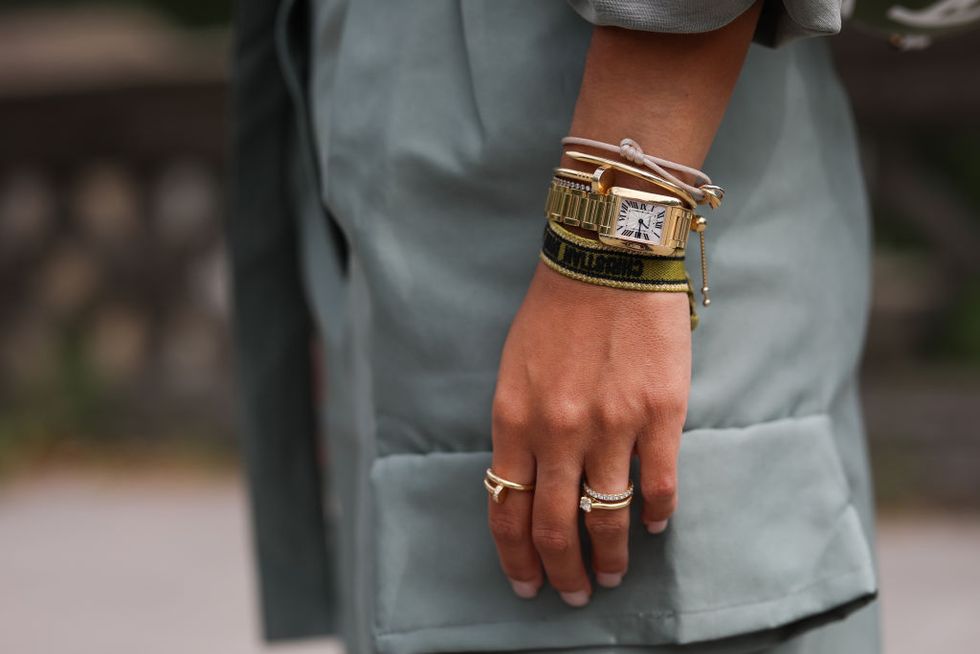 It has to bring you joy

“I always tell clients that no one knows their tastes better than they do,” agrees Faye Soteri, senior watch buyer at Watches of Switzerland, the UK’s biggest watch retailer. “Having an idea of what you want before you set foot in a boutique can help narrow down your search. If you’re looking for an everyday watch that you can wear to work, you might like a classic Rolex. If your style is more offbeat, you could try a timepiece with a vintage appeal. And if you want to celebrate a significant anniversary or to wear for special nights out, you might prefer a diamond-set dress watch from Chopard.” Ultimately, it’s about choosing the right piece that’s going to fit in with your life and your style – whether or not you might want to sell it on in the future.

Having said the above, it also pays to do your research. “There’s so much great content out there to help you decide which make or model resonates best with you and your values. Spend time looking into a brand’s heritage and what they stand for, and you’ll be more empowered when it comes to spending your hard-earned money,” advises Soteri.

Unsure of where to start? Try exploring a few classic watchmakers with historic reputations for performance, provenance, and design. “Whenever we speak about Rolex, Audemars Piguet or Patek Philippe, withstanding the test of time is in their DNA,” says João De Brito E Faro, Watches Supply Manager at Farfetch, adding that Cartier “has also seen tremendous demand in the past few years.”

If your style is more offbeat, you could try a timepiece with a vintage appeal

Even among these brands, there are a few iconic models that never fail to set aficionados’ hearts aflutter. The Omega Speedmaster has (literally) been to the moon and back (it even saved the lives of the crew aboard the infamous Apollo 13 mission). Rolex, also renowned for its impeccable quality, boasts the elegant Datejust, which introduced the simple but important concept of displaying the date alongside the time in 1945. Today, it can be seen on the wrists of Rihanna, Jennifer Aniston and Hailey Bieber. 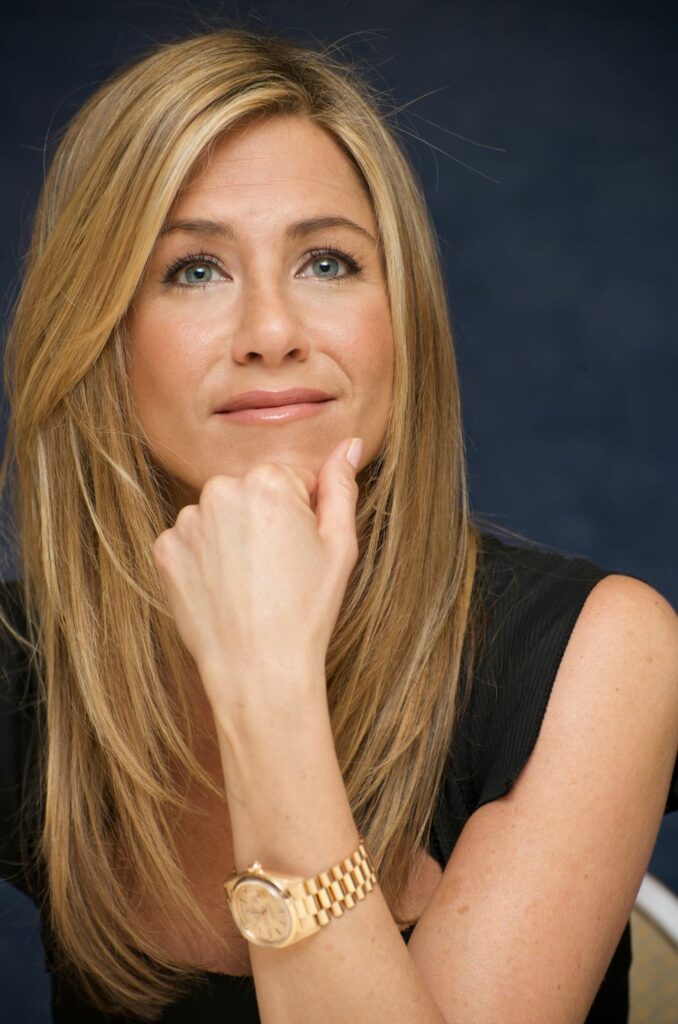 Jaeger LeCoultre’s Reverso watch has an equally impressive heritage. Originally adapted for British army officers playing polo in India in the early 1930s (its reversible case ensured the watch didn’t get damaged during play), the unisex design was worn by everyone from King Edward VIII to Amelia Earhart. Four decades later, Patek Philippe’s sleek, marine-inspired Nautilus, created by the Swiss designer Gerald Genta, caused a sensation when it launched, and it remains one of the most desirable watches to this day. Another Genta-conceived timepiece, the effortlessly chic Audemars Piguet Royal Oak, was also inspired by nautical design and celebrates it 50th anniversary this year. Its octagonal-shaped bezel and idiosyncratic bracelet are adored by Serena Williams, Will Smith and John Legend. 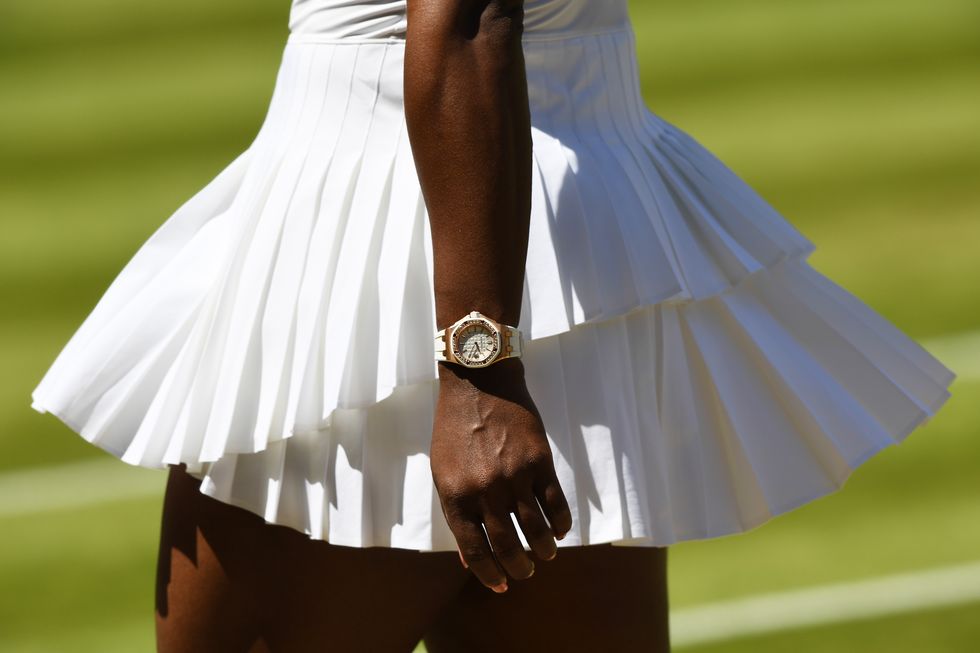 And of course, there’s the Cartier Tank, named for its case shape which pays homage to French tanks which rumbled into battle during WWI. “It’s been worn by everyone from Presidents to Princess Diana and Hollywood legends. It’s practically a legend in its own right,” notes Ming Liu. 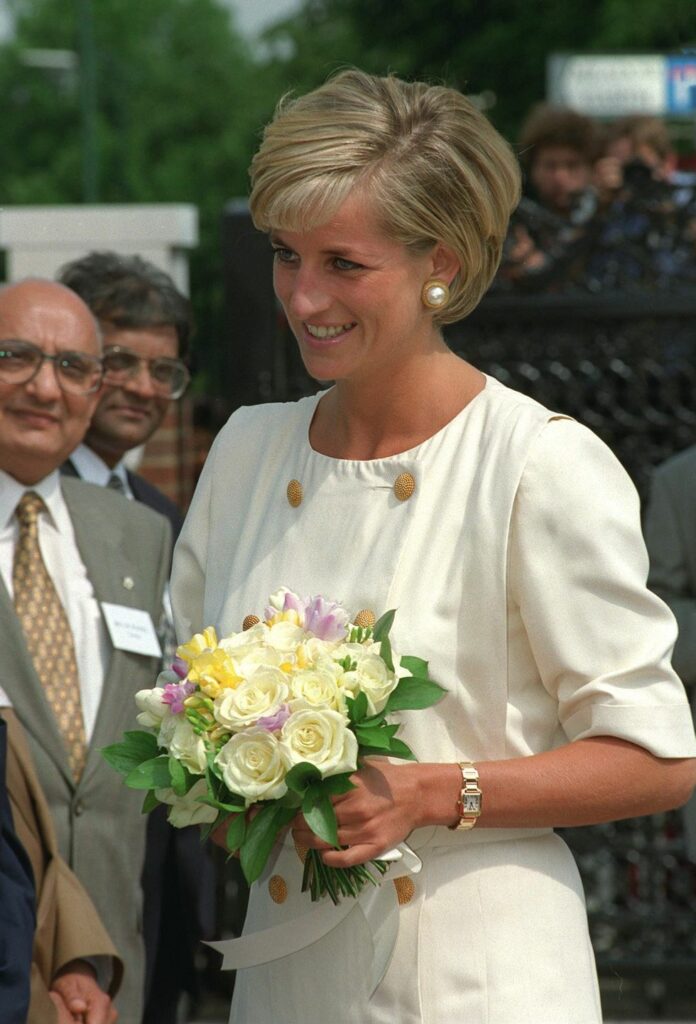 If you’re looking for a second hand or vintage timepiece, auction houses like Sotheby’s, Christies and Philips are an invaluable resource, with experts on hand and all the necessary checks in place regarding authenticity and provenance. If you’ve set your heart on a very specific model, try a reputable watch dealer such as Somlo London or Eric Wind, who has even sourced models for motion pictures. Be patient, though. Many rare pieces can take years to find.

No two wrists are the same, so it’s helpful to see a watch on yourself

A quirk word on materials: yellow or white gold watches look sensational, and tend to hold their value, but are easier to scratch than their steel or ceramic counterparts (bear this in mind if you’re keen on stacking your watch with jewellery). Metallic bracelets last longer and are more forgiving in hot climates than leather or canvas straps, but the latter are easier to replace as they wear out. Fortunately, many leading brands like Longines, Hermès and Vacheron Constantin now offer watches with interchangeable straps, so you can mix and match. “Just make sure you’re able to change them yourself,” says Liu. 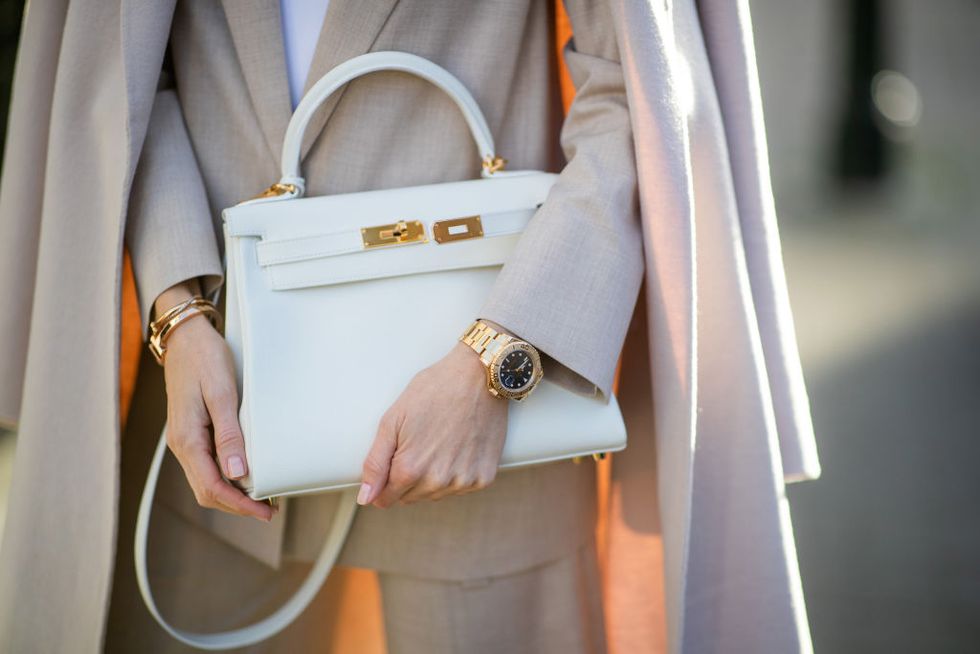 GET TO KNOW THE JARGON

Much is made in the watch world about quartz (battery-operated) vs. manual (hand-wound) or automatic watches, which power a timepiece’s mechanism (its ‘engine’) by harnessing the kinetic energy of your wrist movement. Quartz technology allowed for highly accurate timekeeping when it was first introduced in 1969 but has fallen out of favour amongst experts since then. “Watchmakers pride themselves on being able to make their movements in-house, so there’s a prestige associated with a manual or automatic watch. They could also be considered more sustainable in the long run,” explains Soteri. “But there’s nothing wrong with quartz watches. They’re often a great entry-point to many luxury brands as they’re more affordable to produce.” 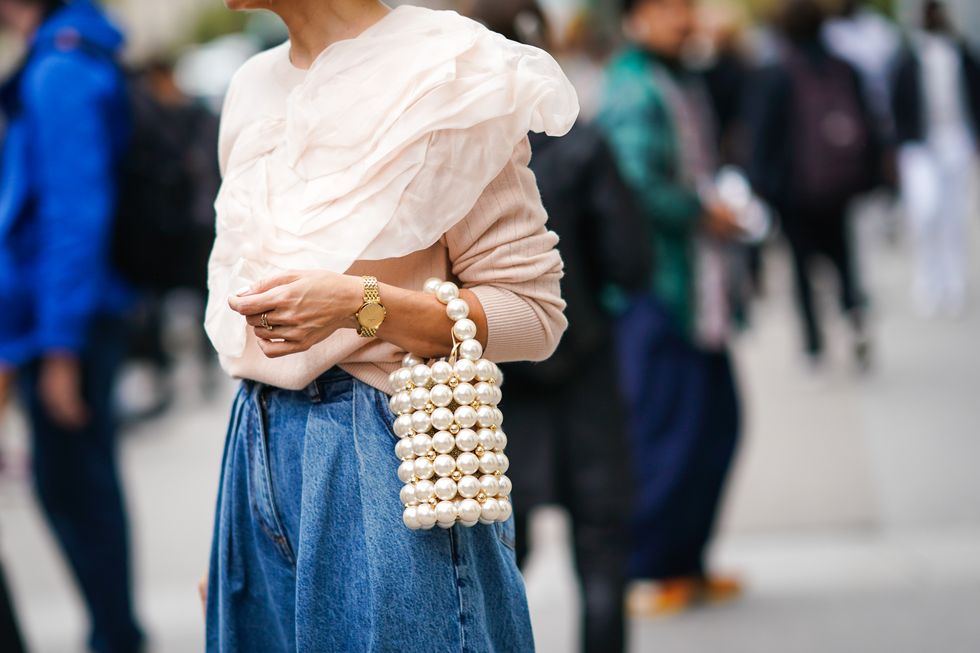 What about ‘complications?’ Any extra hands or dials on a watch is counted as a complication, including calendars, chronographs (stop watches), tourbillons (a mechanical addition from the late 1700s which mitigated the effects of gravity on a watch), and moon phases. “They’re nice additions to a watch and can really show off a maker’s craftsmanship capabilities, but it’s up to you to decide if you need them or not,” advises Liu.

SET A BUDGET AND TRY BEFORE YOU BUY

If you’re considering a luxury watch, it’s worth identifying your budget and sticking to it. And always try before you buy. “No two wrists are the same, so it’s helpful to see a watch on yourself. When I was buying my Reverso, I thought a square-shaped one would suit me best, but a longer, more rectangular one was actually more flattering,” reveals Ming Liu.

Like any luxury item, a good watch should always be a meaningful purchase

Many manufacturers are also waking up to the fact that shoppers may want much more than a dainty, diamond-strewn ‘ladies’ watch. “Watches should be worn by whoever wants to wear them. Watch size is no longer a stigma or a definition of gender, but more how you identify yourself with a specific timepiece. You see more men wearing smaller size watches, and women wearing more oversized now,” notes João De Brito E Faro. “Was there a switch? I don’t believe so. I think that this crossover is just becoming more common, and brands are simply trying to understand how to market it properly.” 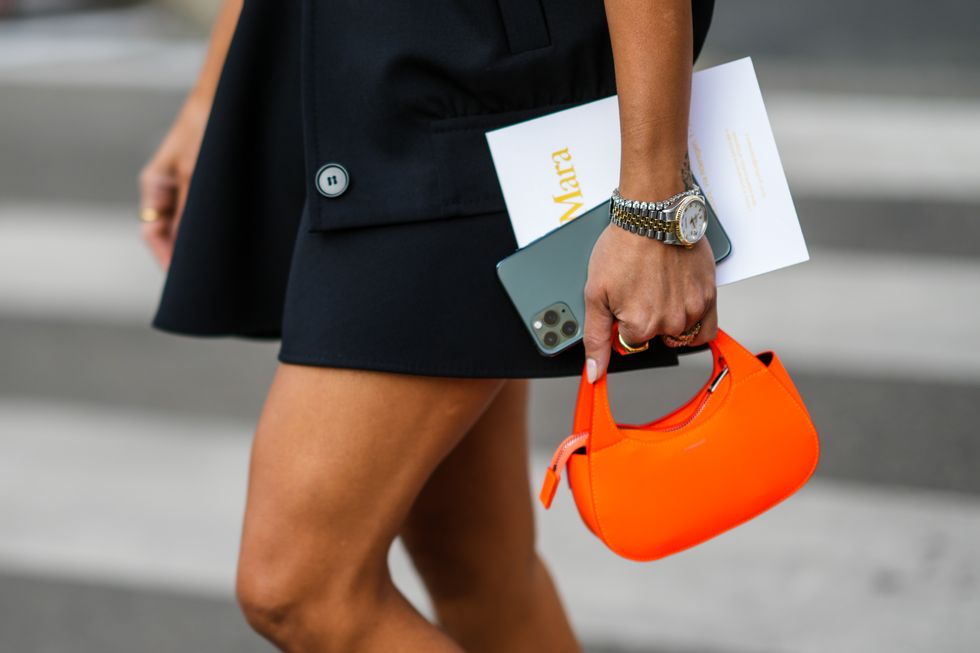 TAKE CARE OF YOUR TIMEPIECE

“Like any luxury item, a good watch should always be a meaningful purchase. If you take care of it, it should last many years, if not decades, which is what a sustainable product should do,” says Faye Soteri, who advises anyone investing in a manual watch to buy a watch winder as well, to prevent the overwinding which could damage its mechanism. Professional servicing is key, too, to ensure everything remains in top condition – take the watch to your retailer or back to the brand itself for best results. Hopefully, you and your watch will be together for many years to come, but do make sure you keep any original documentation – these will help prove its authenticity if you decide to sell it in the future.

Ready to invest? Here, we round up 25 of the best luxury women’s watches available to shop right now.