Peng Lee and I have thrown her wardrobe inside-out and upside-down. We are combing through packed rows of designer ready-to-wear that fall between fashion and vintage, organised in boutique-style glass cabinets, looking for the final look that perfectly encapsulates her style. The air conditioning has gone incognito on this humid Friday morning, and there are gladiator heels, leather corset belts, and pants of all cuts and colours strewn across the floor, as we scurry about trying to find the right accessories, to which she offers her Patek Philippe watch. “That’s the only accessories I wear,” she says, ironically, and almost apologetically. “That, and a fine gold chain.” We finally settle on a Dries Van Noten tank–“My husband calls it an overpriced Pagoda T-shirt, but there is a difference,” she says like a true fashion person–worn with Rachel Comey slouchy jeans, a military belt, and her signature Chanel Autumn/Winter ’18-approved messy bun, accentuated with her too-cool-for-school demeanour. We rush down to the garden, where her 6-year-old daughter Aerin Lee is running through the Caesalpinia trees with her French bulldog Tofu, ready for the picture-perfect shot. Peng eases into her Marni sandals and throws on a textured Dries Von Noten rainbow vest, which Tofu starts chewing at as we click away … 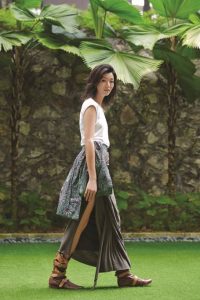 Rocking her favourite Vivienne Westwood Pirate boots in her courtyard

This could be a day in the life of Peng Lee, former fashion industry professional, who has worked the spectrum from Jimmy Choo to Fendi, Louis Vuitton to Cartier, with the bursting wardrobe and sample-size silhouette to show for it. “Sometimes, I don’t know where to start, so I just pull out a T-shirt and jeans before I head out,” she jokes.

Peng’s fashion pursuit started when she joined Fendi as store manager, just as the brand was going through a change in direction. “I started out with Fendi when we were moving away from the logos and focusing more on the handcrafted Selleria collection, furs, and exotic skin,” she says. Peng was selling the “Fendi dream” while doing what she calls “an MBA” in luxury fashion. “The architecture and interiors were also going through an image change globally; it was so exciting to be a part of that whole process,” she muses. That was almost 15 years ago, and Peng’s fascination for the industry remains. “Fashion recycles itself. I’ve held on to pieces from Ann Demeulemeester and Dries Von Noten, bought before my 20s, and still relevant today.” she says, also recalling the iconic Yves Saint Laurent by Tom Ford peasant blouse from Autumn/Winter ’02 that she recently wore to a BAZAAR Power Lunch. “Not many people understand this obsession I have with ready-to-wear. But fashion is art; both visually evoke emotions in the same way.” 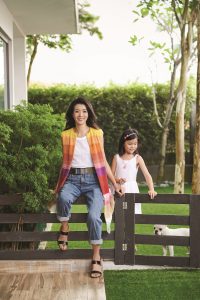 In the garden with daughter Aerin and their pet, Tofu

Peng developed her effortless cool when she was living in London in the ’90s. While she wore labels such as Clements Ribeiro, Vivienne Westwood, and Eley Kishimoto, she also mixed it up with the fluid tailoring and dark romance of Yohji Yamamoto and Rick Owens, as her je ne sais quoi is about “never making anything too perfect”. “I was very into cult-designer dressing with lots of black and layering, which was the street style back then”, she recalls. “The fashion scene now has gone full circle in taking energy from the street, but the difference today is that it’s all seen through social media.”

Since then Peng has made some tweaks to her style, as a full-time mother of two and a practitioner of Ashtanga yoga today, favouring the offhand sensibility of Celine and Rosie Assoulin for school runs and the occasional flirtatious ruffles from Leal Daccarett or Johanna Ortiz for nights out. 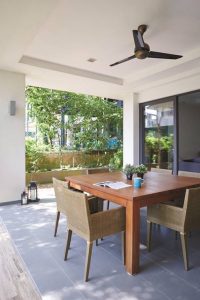 Bright sunny mornings in the patio

Now, in the late afternoon, we’re walking through the courtyard, before sitting down for a prawn linguine lunch, prepared single-handedly by her favourite chef, her son Justin Lee, who at only 12 years old, can put together a whole six-course meal of “deconstructed” beef Wellington and chocolate hazelnut souffle. Switching off fashion mode, Peng talks about the recent remodelling of her home, after moving back from a four-year stay in Hong Kong. 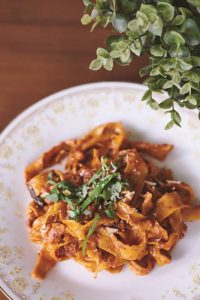 Prawn linguine with fresh basil leaves from the garden

“We’ve had this house since 2009, and it was designed to be a three-storey home with a sunken garden.We recently gave it a facelight with the overall colour tone inspired by my Etoupe grey Hermes Birkin!” she explains.

The couple was very hands-on with every minute detail of her home, from the Volakas marble floor tiles to the Gessi faucets and sleek Olivari door handles. She only selected a handful of statement designer fittings, such as a white Louis Poulsen lamp in the kitchen and a quirky Porada mirror and chest combination that sits in her foyer, firmly believing that “less is obviously more”. 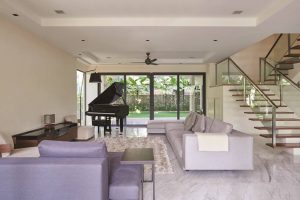 When not chasing after her kids and managing this modern mansion, Peng finds time for yoga, her favourite superfood smoothies, playing Ryuichi Sakamoto on her baby grand, and planning the next family holiday, where Kyoto remains a favourite. “I remember reading Memoirs Of A Geisha and it really sparked my desire to visit the city. The natural beauty, its gracefulness, and the tranquillity make it the best place to be inspired by,” she says. Peng now visits the city of shrines armed with an “Excel spreadsheet of restaurant reservations”. In between checking things off her gastronomic bucket list, she enjoys doing things off the beaten track, like taking a train out to neighbouring cities like Nara and Kobe. “In Japan, possibilities are endless. One thing that we did recently was taking the Sagano Scenic Railway to Kameoka, and then coming down via a raft to the Hozugawa River—what a thrilling experience!” she reminisces. 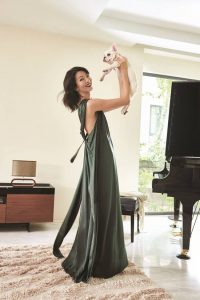 We end our shoot and interview with Peng back in her walk-in wardrobe—where else would we be?—for requisite Instagram shots. She picks out a favourite outfit bought recently, a Saint Laurent lace dress with a jewel-encrusted neckline that takes our breath away. “This is why I am so obsessed with fashion! The cut, the flow of the garment, and the proportions are really crucial. I can see myself wearing this dress even when I am 70 years old. Fashion is forever!” she laughs. “Like what Oscar Wilde said, ‘One should either be a work of art, or wear a work of art.’”