People /
Celebrity Watch
This would be the first child for both Hadid and Malik.
by Bianca Betancourt 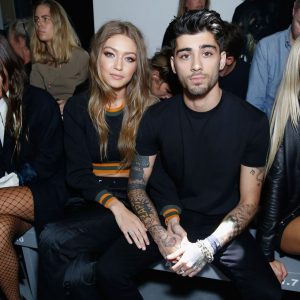 According to TMZ, the supermodel and her boyfriend, musician Zayn Malik, are expecting a baby together. This would be the first child for both the runway star and singer.

A “family source” told the outlet that Hadid is reportedly about 20 weeks along in her pregnancy and the sex of the baby is unconfirmed.

An insider also confirmed the news to Entertainment Tonight, saying both Hadid and Malik’s families are “overjoyed” by the news.

“Gigi and Zayn are expecting their first child together and the couple is very excited!” the source told ET. “Gigi has kept the secret close to her family and friends for a while as she’s only a few months along. Once Gigi and Zayn got back together at the end of last year it was like they never skipped a beat and knew what they had was special. The couple and their families are overjoyed.”

The extremely private couple have been in an on-and-off relationship since 2015, but Hadid recently confirmed their reunion with a sweet Instagram post late last year. The supermodel, who recently celebrated her 25th birthday over the weekend, revealed in another Instagram post that Malik was with her for the intimate, low-key party at her family’s Pennsylvania farm.

In the endearing post, Hadid shared a photo alongside Malik and her sister, Bella Hadid, while holding up two giant silver number balloons that read “25.” Hadid is seen wearing high rise, light-wash denim, a loose black turtleneck and chic leather chelsea boots in the post.

“Had the sweetest day celebrating my 25th birthday with my quarantine family, who made it so special for me, along with all the love I felt from all over the world! Thank you to everyone for the birthday messages, I carried you with me yesterday!! 💛🙏,” wrote Hadid alongside another birthday post.

Hadid and Malik have yet to publicly confirm the news.