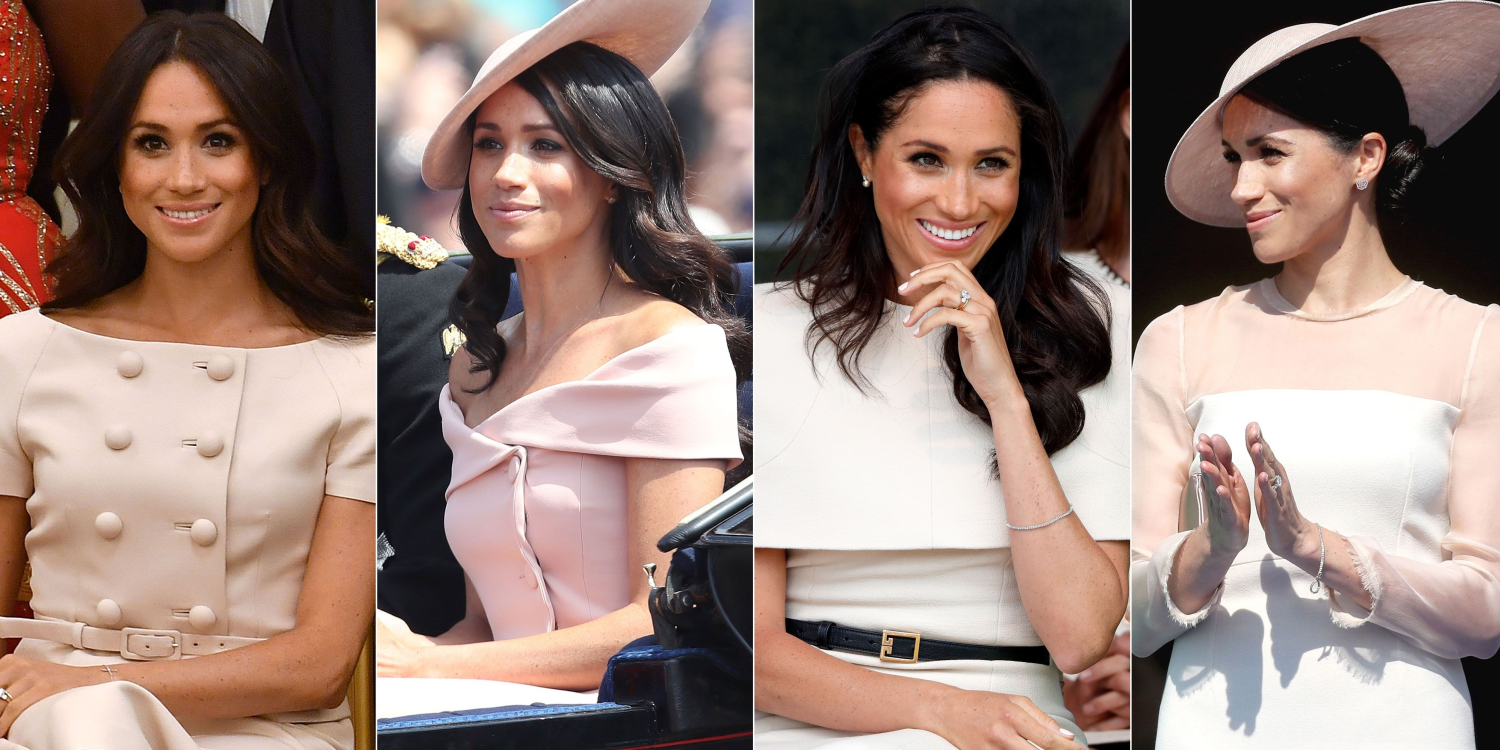 People /
Celebrity Watch
You might not have noticed
by Sarah Karmali

Much has been made of Meghan’s wardrobe choices since she officially joined the royal family. Fashion commentators and royal watchers have analysed her every move; is she following (or, more excitingly, breaking) royal protocol? My, what a daring neckline choice. Gasp, she’s worn tights.

There have been a few noticeable differences in the fashion choices made by the Duchess of Sussex to those made by Meghan Markle. Possibly taking cues from the Duchess of Cambridge, the new royal seems to be choosing ladylike dresses in looser silhouettes, opting for a neat bun over her formerly favoured messy style, and has swapped her cross-body bags for small clutches. But there’s one unexpected trend that she has exclusively adopted since her wedding day: wearing neutral tones. 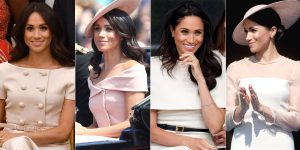 Since marrying Prince Harry on 19 May, the Duchess of Sussex has only worn light shades of white, blush or cream for her official engagements. Let’s consider the evidence: 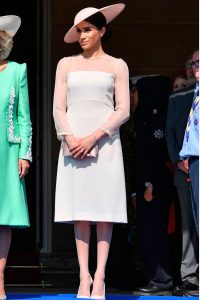 Next up, was the Trooping the Colour parade. The duchess chose an off-the-shoulder Carolina Herrera dress for the occasion with a co-ordinating Philip Treacy hat. 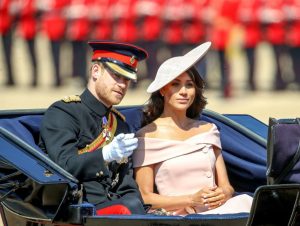 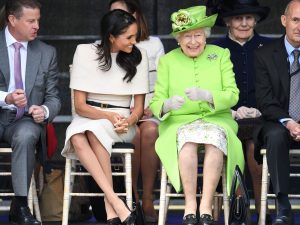 For her debut at Ascot, the duchess opted for a white shirt dress – again, by Clare Waight Keller for Givenchy – paired with a My Fair Lady-inspired hat. 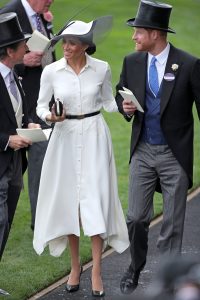 Cementing the trend, for her most recent appearance, at the Queen’s Young Leaders Awards at Buckingham Palace, the new royal chose a blush pink Prada skirt suit. 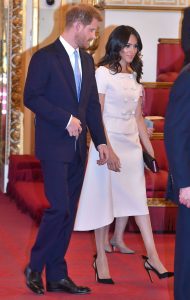 There’s only been one post-wedding occasion whereby Meghan hasn’t followed the neutral-only rule; she wore a blue patterned Oscar de la Renta dress to the wedding of Prince Harry’s cousin Celia McCorquodale. However, this was a private occasion, not an official event that she was attending on behalf of the royal family. 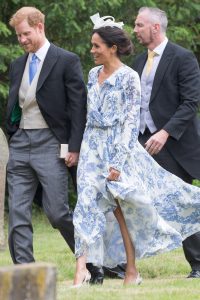 So why the sudden desire to exclusively wear hushed, muted tones? Guilia Papailias, styling expert at Beaumont Etiquette, suggests that this could simply be Meghan basking in the glow of being a newlywed and continuing to have her ‘bridal’ moment.

“Romance is soft, like a neutral palette – she is a newlywed after all,” she toldHarper’s Bazaar UK. “Meghan continues to give us the fairytale that we became enamoured with the first day we saw her walk up those stairs. She continues the magic.” 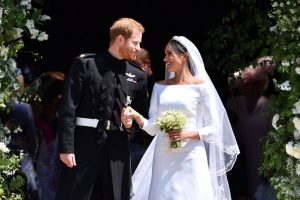 While that may be true, the most likely reason for the neutral colour palette is that it’s actually a respectful way to try and not steal focus from anyone more deserving of the spotlight, like the honourees at the Queen’s Young Leaders Awards, or to avoid upstaging the Queen – who is renowned for wearing bright colours so that she can be easily be spotted in a crowd.

“The Duchess of Sussex is showing great consideration by wearing more neutral colours and tones when on duty with Her Majesty as it allows the Queen to take centre stage and top billing, as is only right,” etiquette coach William Hanson told us. “The Queen is known to wear bright, block colours when on official duties as it means that the crowds can see her easily and, as she says, ‘she has to be seen to be believed’.” 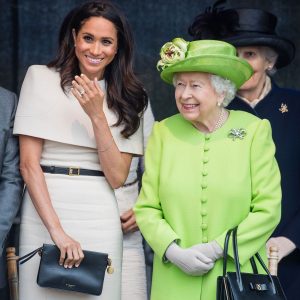 He points out that its a considerate styling tactic also used by the Duchess of Cambridge.

“During the 2012 Diamond Jubilee River Pageant, the Queen wore white, so she stood out against the red furnishings of the royal barge, whereas the Duchess of Cambridge wore red, making her almost disappear and not pull focus from the real star of the show.” 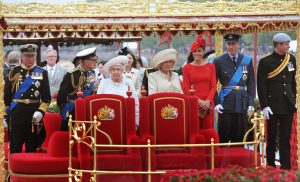 The royal family during the Diamond Jubilee pageant in 2012. Photo: Getty Images

Kate has also often opted for more muted tones when making official appearances alongside the queen, or when she doesn’t want to pull focus – as with the recent royal wedding. 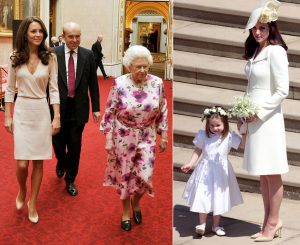 Fashion commentator Lucas Armitage agrees that Meghan has taken a leaf out of Kate’s book when it comes to dressing appropriately and considerately for official events; it demonstrates that she’s taking her new role seriously. 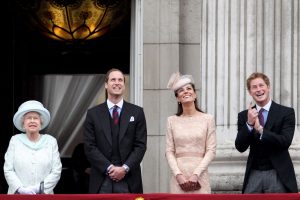 “This is a clever styling tactic as it will always work with the Queen’s look,” Armitage told the Daily Mail. “The use of neutral colour on Meghan’s part is a show of respect to the Queen so she never looks like she is trying to outshine her. 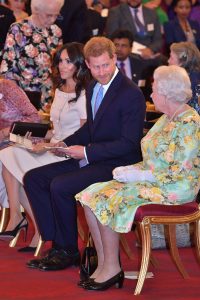 “No one can upstage the Queen of England, but Meghan can softly complement her,” she says. “Enter a room softly and you will be a whisper. Enter loudly and you will want to be forgotten.”

Jewels & Watches
Introducing a fine jewellery collection inspired by the confident woman who leaves a mark on her way.