Beauty /
Beauty Buzz
Kim Kardashian West is teaming up with sister Kylie Jenner for a perfume collaboration.
By Jenna Rosenstein 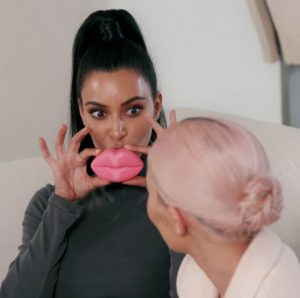 Kylie Jenner and Kim Kardashian West finally gave fans a sneak peek at their upcoming KKW Fragrance collaboration on the season 16 premiere of Keeping Up with the Kardashians. The two beauty moguls and half-sisters sat down for a meeting at Kardashian West’s house to go over final fragrance samples and packaging, and it appears the meeting was filmed way back in September 2018. The name and scent of the new perfume is unknown, but the bottle is fittingly shaped like a giant pair of pink lips (duh). 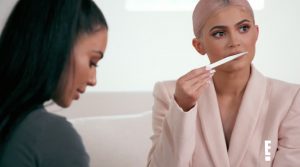 The clip from the episode starts with Jenner waiting for Kardashian West while sitting at a table full of tiny perfume samples from famed fragrance house Givaudan. There’s also a sheet of paper on the table showing what appears to either be three fragrances or three different bottle color options—including classic red, pink, and peachy nude.

The sisters each took their turn sniffing the samples, then turned their attention to the size of the bottle. “What we found online is that this ml this looks obviously better on your counter, and it’s cuter for people to take pics like this,” she says while holding up the smaller of the two bottles to her face. 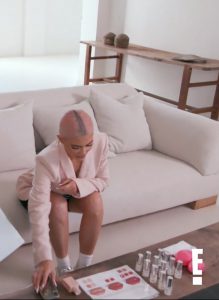 No word yet on when the Kylie Jenner x KKW Fragrance perfume will launch, but we imagine it will be soon. This marks Jenner’s first foray into the perfume world, though she’s long been a fan of Kardashian West’s original fragrance from 2010 called Kim Kardashian by Kim Kardashian. Jenner has also taken to Instagram Stories and Snapchat to say she “only wears KKW Fragrance,” while opening the PR package for the Kimoji Peach perfume.

Fashion News
Over half a million people walked through the doors.

Fashion
The fashion legend has announced on Twitter his plans to retire.

Culture News
He also gave a shoutout to all mothers.