Why The Bacteria On Your Face Could Help Prevent Skin Cancer

Certain bacteria living on your skin could help protect against skin cancer, a new study focusing on the microbiome has revealed. 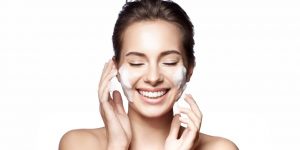 The research, published in Science Advances and analysed by Allure, suggests that a particular strain of bacteria, which is actually quite commonly found on your face, could be an important defence against the development of cancerous skin tumours.

“We have identified a strain of Staphylococcus epidermidis that exerts a selective ability to inhibit the growth of some cancers,” said Richard Gallo, the chair of the department of dermatology at UC San Diego School of Medicine. “This unique strain of skin bacteria produces a chemical that kills several types of cancer cells but does not appear to be toxic to normal cells.”

Here’s how it works: the bacteria in question is found as part of your skin flora – a combination of bacteria, yeast and parasites that exists naturally on your skin – to make up your skin’s microbiome.

A particular strain of this bacteria releases a chemical, dubbed 6-HAP, which “messes with the creation of DNA”, explains Macaela Mackenzie at Allure. This means it could “potentially suppress the development of UV-induced skin tumours” – preventing the development of skin cancers caused by sun exposure.

The study tested the theory by exposing rats – which had received a topical dose of S.epidermidis – to UV rays. Researchers found that the rats coated in a bacteria strain that produced 6-HAP had inhibited tumour growth. Similarly, when mice with aggressive melanomas were given a shot of 6-HAP, tumour growth was suppressed by more than 50 per cent, when compared to a control group.

Importantly, the research has yet to be conducted on human cells, but the results could throw doubt on the decades-long emphasis on super-clean skin. In particular, it suggests that the bacteria we have been over-zealously cleansing off our faces could have protective benefits.

“A healthy microbiome can keep our skin healthy and glowing in a number of different ways”, says the New York dermatologist Whitney Bowe, who was interviewed by Allure. “Through their sheer strength in numbers, these friendly microbes can stop bad bugs from invading and triggering inflammation. When in balance, the microbiome can also aid in wound healing, curb sun damage, keep your skin plump and firm, and even help protect you against skin cancer.”

“When it comes to caring for your skin, over-cleansing is the number-one skincare mistake people make on a regular basis,” continues Bowe, who recommends stepping away from an overly stripping or obsessive face-washing regimen.

Whatever you do, though, don’t put down your SPF. That’s because, while skin-friendly bacteria might be a helping hand for your skin, “the most important things you can do to protect against skin cancer are practice good sun protection, such as wearing sunscreen, protective clothing and seeking shade,” says Shah.

Rose-Infused Beauty Products to Treat Yourself To