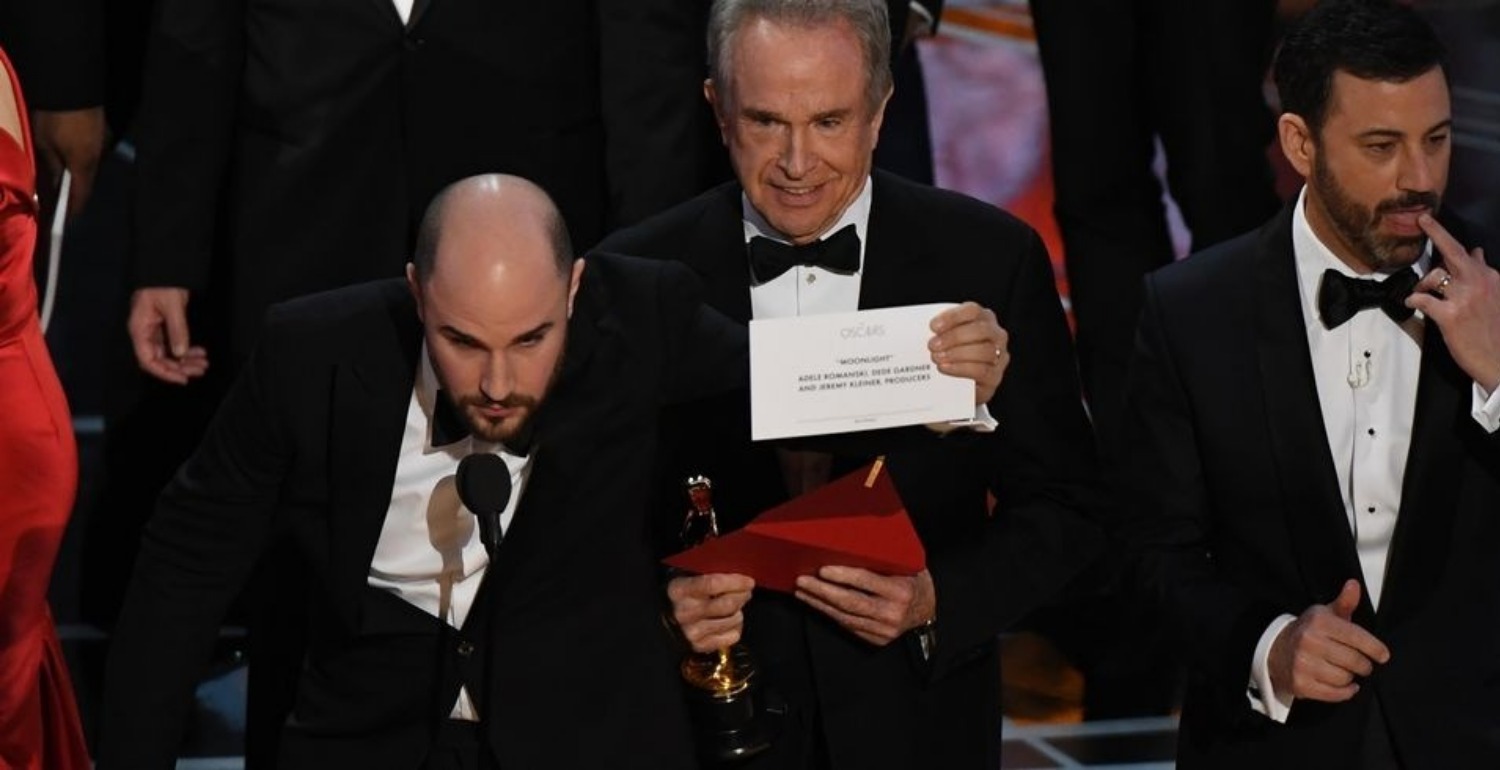 It was the gasp heard ’round the world: a sharp, near-simultaneous intake of breath from the audience at the Dolby Theatre after La La Land producer Jordan Horowitz stopped his colleagues’ acceptance speeches to make this announcement: “There’s a mistake. Moonlight, you guys won Best Picture.” 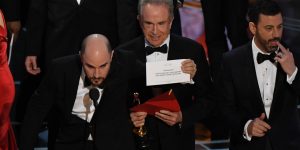 It was, without a doubt, the most shocking moment in Oscars history. Quickly dubbed “Envelopegate,” the mistake wasn’t totally unprecedented—Sammy Davis Jr. accidentally announced the name of someone not even nominated in the category he was presenting at the 1964 Oscars—but in 2017, for the biggest category of the night, on the biggest night of the year in Hollywood, this was just about as bad as it could get.

But a year has passed, and it seems like the Academy might be willing to joke about the situation now. At the very least, you’ll probably be hearing about it a lot on Sunday night. Let’s revisit exactly what went down—and why it probably won’t ever happen again.

In honor of the 50th anniversary of Bonnie and Clyde, the Academy tapped Faye Dunaway and Warren Beatty to announce the 2017 Best Picture winner. The two took the stage together, gave a cute speech about using art to find the “truth,” and announced the nominees. So far, so good.

But then they get to the envelope, and that’s when the trouble starts. Beatty looks at the card, glances at it again, raises his eyebrows, looks in the envelope for another card, checks the card again, then glances at Dunaway for help. Visibly panicking, he seems to stall, slowly stating—and by the end, essentially sputtering—”And the Academy Award… for Best Picture…” Then he stops again. The audience thinks he’s joking. Beatty shows the card to Dunaway, who has just muttered, “You’re impossible,” in his direction. Dunaway, reading the card, confidently announces, “La La Land” and the room dissolves into cheers.

This wasn’t a shocking statement. With 14 nominations, La La Land tied with All About Eve and Titanic as the most-nominated film in Academy history. It was widely predicted to win this award. The movie’s cast and crew hit the stage to give their speeches, with producer Jordan Horowitz speaking first. As he steps away for producer Marc Platt to speak, he realizes something is happening behind the scenes. When Platt finishes, La La Land producer #3, Fred Berger, shakes his head, then approaches the mic to give his speech. At this point, a veritable brouhaha is taking place behind the mic. Stage manager Gary Natoli is onstage, and Beatty is back. Everyone is flustered. Berger concludes his speech with, “we lost, by the way.”

Then Horowitz rushes the mic, shouting, “Guys, I’m sorry. There’s a mistake. Moonlight, you guys won Best Picture. This is not a joke. Come up here.” Platt echoes him: “This is not a joke, I’m afraid they read the wrong thing.” Horowitz pulls the right envelope out of Beatty’s hand and holds it up for the camera.

The stunned Moonlight team approaches the stage, after a most appropriate response:

Host Jimmy Kimmel attempts a couple awkward jokes, while Beatty takes the mic to explain what happened: “I opened the envelope, and it said, ‘Emma Stone, La La Land.’ That’s why I took such a long look at Faye, and at you. I wasn’t trying to be funny.” He pauses, laughing awkwardly. “This is Moonlight, the Best Picture.”

Moonlight‘s stunned director, Barry Jenkins, finally gets a chance at the mic. “Very clearly, even in my dreams, this could not be true,” he says, dazed. “But to hell with dreams, I’m done with it. Because this is true.” He continues, “It is true, it’s not fake, we’ve been on the road with these guys for so long, and that was so gracious and so generous of them. My love to La La Land.”

An agonizing two minutes and 30 seconds had passed between Dunaway’s announcement and Horowitz’s clarification.

Why did it happen?

Some background: PwC is the accounting firm that counts the Academy votes to determine the winners before the ceremony. Cullinan was one of two PwC accountants who served as the “balloting leaders” for the 2017 Oscars. The balloting leaders are responsible for memorizing the winners in all 24 categories and handing the correct envelope to the presenters before they go onstage. Cullinan and his fellow balloting leader, Martha Ruiz, each had a briefcase containing the winning envelopes, so there are always two versions of the winning card—one to be presented, the other as backup. Cullinan gave Beatty the extra “Best Actress” envelope.

The Academy has a contingency plan in place for balloting leaders in case the wrong winner is announced. In fact, on the Friday after the Oscars, stage manager Gary Natoli told The Wrap he had a conversation with Cullinan several days before the ceremony about exactly what should happen if the wrong winner is announced. “I said, ‘If you know who the winner is, you don’t need to check with [the other balloting leader],” Natoli said. “You need to immediately go out and rectify the situation, ideally before the wrong winners get to the mic.’ And he said, ‘OK, good, that’s what we thought.’”

But when Dunaway announced the wrong winner, Natoli said Cullinan and Ruiz “froze.” He told The Wrap, “We had to push them on stage, which was just shocking to me.” PwC confirmed to the New York Times the Monday after the ceremony that “protocols for correcting [the mistake] were not followed through quickly enough by Mr. Cullinan or his partner.”

Cullinan’s social media usage could have contributed to the error. On Monday, February 28, The Wall Street Journal reported that the Academy denied Cullinan permission to post on social media during the ceremony. Yet Cullinan tweeted a photo of Emma Stone with her Oscar at 9:05 PM PST, two minutes after Beatty and Dunaway took the stage, Variety reported the Wednesday after the ceremony, along with a photo of Cullinan on his phone at 9:04 PM.

That same day, March 1, 2017, the Academy confirmed to NBC News that it would not work with Cullinan and Ruiz in the future; the two accountants will, however, remain partners at PwC.

“The academy used a new envelope this year, featuring red paper with gold outside lettering that specifies the award inside. That may have made the outside of the envelopes more difficult to read than last year’s, which featured gold paper and red lettering.”

What’s does all this mean for this year’s ceremony?

For the most part, those adjacent to the situation seem willing to laugh about it now. Jimmy Kimmel is back as host for this year’s ceremony, and he managed to tap Warren Beatty for an admittedly funny ad poking fun at Envelopegate:

And the gaffe will be addressed during Sunday’s Oscars telecast. TMZ reportedBeatty and Faye Dunaway attended the Oscars rehearsal at the Dolby Theatre in LA on Thursday, and yesterday, Us Weekly reported that they will present Moonlightwith the 2017 Best Picture award.

“The Academy is giving Moonlight a proper chance to reaccept their Oscar award,” a source said. “Faye and Warren will present it to the cast again as the first award of the night.”

As for PwC, they’ve established several rules to ensure the correct winners are announced at the 2018 Oscars, the Associated Press reports. This includes the addition of a third balloting partner in the control room, a new protocol that demands the stage manager and the presenter confirm the correct envelope backstage, and a social media and cell phone ban for all PwC employees at the ceremony.