We’re taking note of the many times A-listers wore the same look, and how they made it their own.

The Duchess of Sussex and Amanda Peet 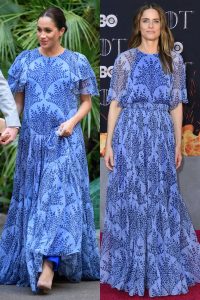 Although the dress Meghan wore in Morocco was custom-made and altered to fit her due to her pregnancy, the former actress’ dress was the same blue floral design by Carolina Herrera, which Amanda Peet wore several weeks later to the Game of Thrones season eight premiere.