Michelle Pfeiffer wore a Dior Haute Couture ensemble – a black jacket worn over a cascade of fringed feathers – an outfit inspired by the design ‘Grand Bal’ from Spring/Sumer 1949. 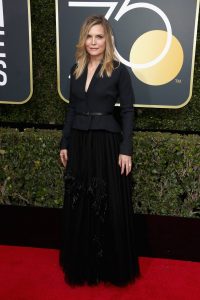