Fashion /
Fashion News
Anthony Vaccarello goes against the grain, with an ode to Saint Laurent’s most opulent collection.
by Amy Yasmine

In 1976, when asked what his most beautiful memory in his 30 years of design was, Monsieur Saint Laurent responded, "The collection inspired by Russia. Perhaps it wasn't the most successful one, but it was wonderfully received at a time when the world condemned opulent."

Indeed, amid the heady spirit of sex, drugs, and rock 'n' roll of the '70s, Monsieur Saint Laurent's Opera-Ballets Russes haute couture collection couldn't have stood out more than a Barguzin coat at Woodstock. Its gilded furs, ornate embroideries, and luscious silks were the antichrist to the decade's suede fringing and bell bottoms, but this season at Saint Laurent, Anthony Vaccarello struck a balance between the two.

Today, Bakst's romance has been turned on its head with distinct modern irreverence. Cue a series of statement caliginous pieces, from dark tasselled cocktail boleros in sensual velvets to metallic lame dresses fit for a 21st-century Alexis Carrington. Elsewhere in the collection, sumptuous leathers toughen up gothic Victorian lace--think Loulou de la Falaise meets Crimson Peak--while smoking jackets were given Bakst's oriental twist, complete with Chinese knots and mandarin collars. To evoke the Russian artist's whimsicalities even further, midnight furs are sculpted into oversized Cossack hats and fantastical evening dresses--one in particular features a neckline that stretches across the decolletage like smoke drifting in air. Here, the creative director's sophisticated approach is most pronounced, displaying his technical prowess that has matured since his debut Spring/Summer '17 collection. A refreshing departure from the risque cuts--remember the nipple pasties?--and thigh-high slits he's known for, and far more sensible to the Saint Laurent clientele at large. Case in point: the melange of wearable separates, including but not limited to metallic cable knit jumpers, oversized bomber jackets, and shimmering maxi skirts. Still, he's kept an ounce of Vaccarello va-va-voom through a raised hemline here, or a plunging neckline there.

Suffice to say, this season's offering is a study in the creative director's ability to appeal to various Saint Laurent women through the years. A consolidation of the maison's top hits. To the Hedi Slimane loyalist, there is the Frenchman's rock 'n' roll appeal, while Stefano Pilati's exacting tailoring is present in a number of tweed coats and dinner suits. There are hints of Alber Elbaz's dramatics, too, like in the collection's feathered flourishes, reminiscent of Elbaz's Autumn/Winter '00 collection.

And so, to echo Monsieur Saint Laurent, could this be the most opulent collection of all? Perhaps not, but in a world of haute tracksuits and orthopedic sneakers, Vaccarello is heading in the right direction. 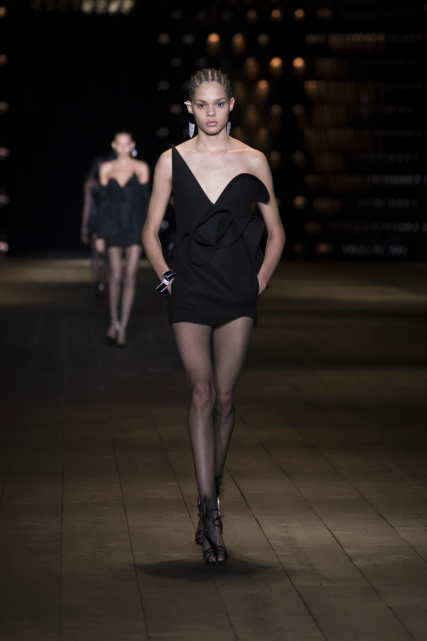 Hiandra Martinez in a whimsical cocktail number on the runway

Beauty Buzz
This hair treatment prevent tangles, frizz, and breakage all in one.

Fashion News
How many are on your wish list?