In Conversation with Manolo Blahnik

Is there a woman who has never heard of the name, Manolo Blahnik? With the release of his biographical film Manolo: The Boy Who Made Shoes for Lizards and works currently on display in museums all over the world, the Spanish designer reveals to BAZAAR tales he hasn’t been able to tell until now, and his thoughts on his upcoming collection. 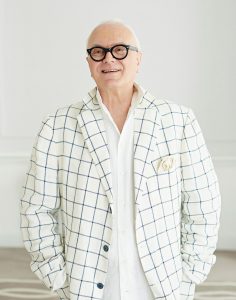 You’ve had many iconic creations to your name. Which of them would you consider as the most memorable during your career?

When I worked with Kansaï Yamamoto in 1971. As we were putting a show together, I was providing the shoes, and we ended up making Japanese geta sandals and called them The Brick. We bought cork around Portobello Market, in acid green and pink python leather. We gathered all these materials from the market, and got everything made within a week. I consider that to be the start of my career but at the time, I did not know exactly if the shoes were good or bad. So of course, I was nervous to show him. Thankfully, though, he liked them and told me so. 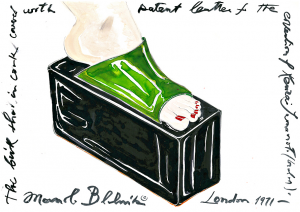 A sketch of the geta sandal, made in collaboration with Japanese designer Kansaï Yamamoto

Then you went to New York?

I showed Mrs Vreeland my theatre design portfolio. She said, “Wonderful accessories, wonderful objects. Take it further.” So my stumbling into shoe design was really accidental. I was so set on becoming a theatre designer, that the thought of being a shoe designer really hadn’t crossed my mind.

How did you feel about being told that?

Well, my mother also designed shoes. Maybe it’s something in my genes? Who knows?

I had friends who lived there … Marianne Faithfull, Bianca Jagger, Cecil Beaton. It’s the smallest, but my favourite shop.

You also collaborated with British designer Ossie Clark. How did that chapter unfold?

I stumbled upon Edward Green, this stunning, heavenly men’s shoes shop on Bond Street. I think they also made shoes for the royal family. It was at this shop that I was told about a shoe factory in Walthamstow, in East London. I had no money to open a boutique and had to borrow from the bank. I managed to borrow about GBP2,000 and went to the shoe factory. I created my first collection there, and made shoes for Ossie. He came all the way to the factory to see the shoes, and he liked what I designed. 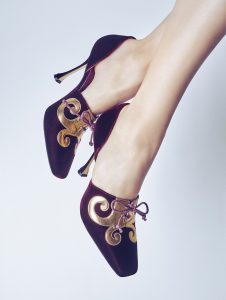 What was most memorable about that collaboration?

There was an incident. At the time, I made the body and heel of a prototype shoe entirely out of rubber. Then, we worked on the sample product at the factory, but I forgot to tell them to embed iron in the core of the heel. I thought my career was over. It was really hot at the show venue, so the shoes were steadily going soft and the model couldn’t actually walk properly. On the other hand though, it looked like she was dancing. My friend Cecil Beaton exclaimed that the model’s walk looked cool, so I was rather taken aback. Cecil helped me a lot throughout my life. It is because of him that I am who I am today. It sounds like a strange, comical story, but it’s true.

Which collection of shoes throughout your career is your favourite?

The designs for Ossie Clark in 1971. They’re truly spectacular to me. Ossie was a wonderful person, and even Yves Saint Laurent was buying shoes at Ossie’s shop. It is really sad that he’s gone. Other than that, the Agatha shoes from John Galliano’s first Paris collection for Spring/Summer ’93. We really poured our hearts into producing them.

Tell us about your latest collection. What of it and its features stand out from the rest?

The Harris Tweed was exclusively produced for us in Scotland, and it’s utilised throughout. They go well with socks and without. We’re getting rather tired of the pointed toe, so for this Spring/Summer ’19, we’re going extreme with the cut. I will make heels that are wonderful—like Constantin Brâncuși’s sculptures. 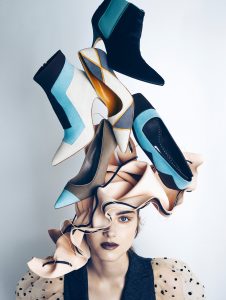 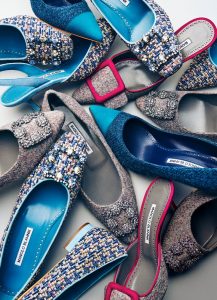 Which designers currently inspire you?
I love the young designer Simon Porte Jacquemus. Also, Grace Wales Bonner. She’s truly wonderful. She’s half-Caribbean, half-English. We’ve been working together for the past three years, since she was 24 years old.

Are there any other creatives that have sparked your interest?
American author Gore Vidal, photographer and actor Vince Conti, and Greek soprano Maria Callas.

Do you have a muse?
Tina Chow; she’s really special. Her mother was an ikebana teacher, if I remember correctly. Her father was Dutch. I considered her like my younger sister, and I still think of her now. Tina could make simple cashmere with flannel trousers and flat shoes work. She’s got a beautiful nape that makes her look very posh and elegant. It’s like she was born with that elegance in her. There is also Anna Piaggi. It’s been almost seven years since her passing, hasn’t it? We had this habit of always speaking on the phone for at least 10 minutes. Isabella Blow is also unforgettable. I was always so pleased that she wore my shoes. She always smiled; she was crazy but well-mannered, romantic, and intelligent. They are inimitable.

What are your thoughts on the future? Is there anything else you’d like to achieve?
Future? Achieve? I think now is more future than the future. The future is complicated, so I would just like to be as much of myself as I can. Doing things my own way, and becoming the person I want to be, is work enough. Of course, I would like to take my brand to the next level. I would also like to take my own time, like Azzedine [Alaïa]. I want to show what I can do for myself. This is all I can hope for the future. 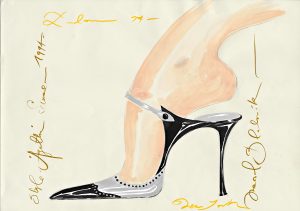 Illustration of the Agatha heel, from John Galliano’s first Paris collection for Spring/Summer ’93