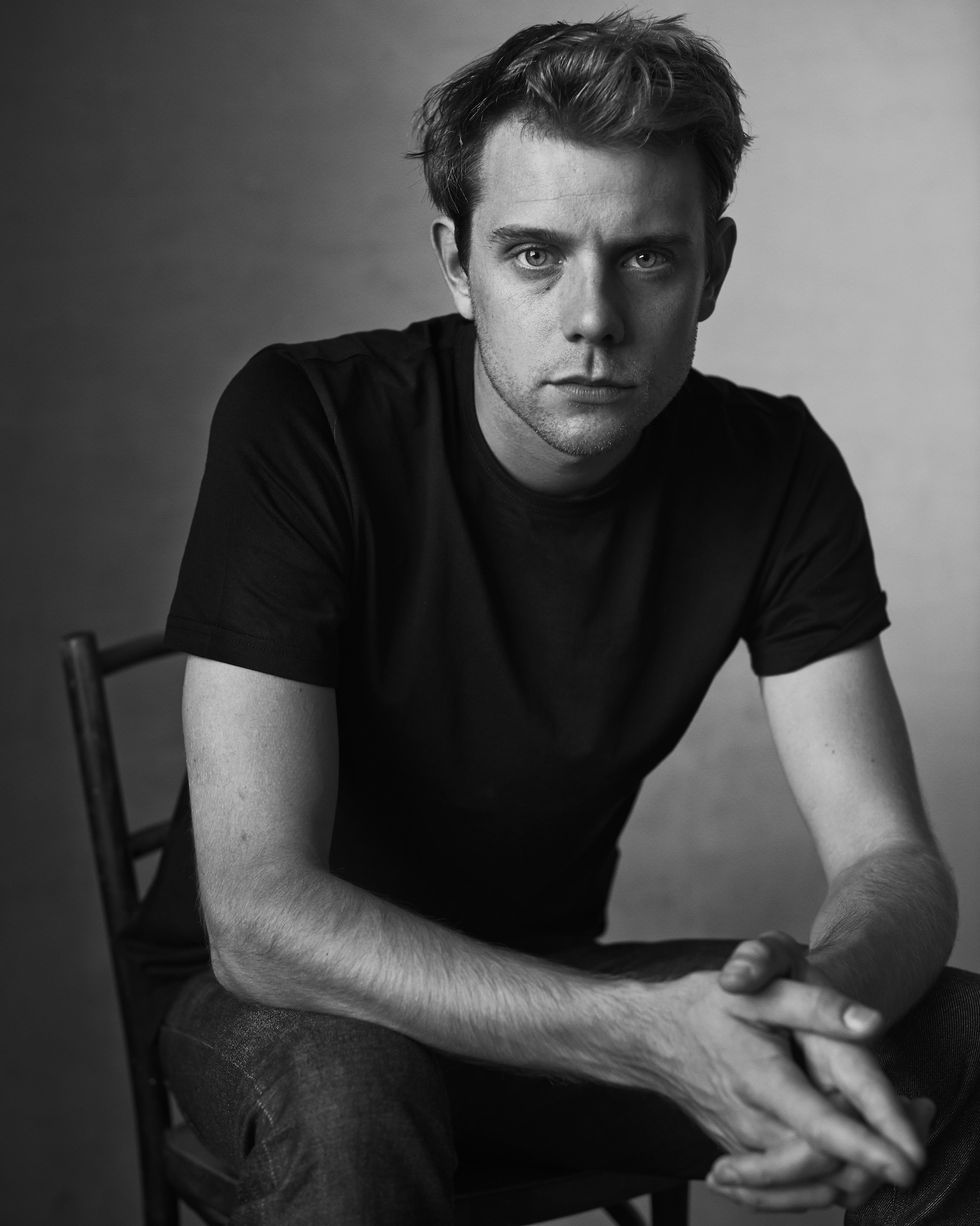 Jonathan Anderson wants to break up. The London seamster helms the artfully cool JW Anderson label and the handbag envy machine that is Loewe, but after 35 runway shows, he’s kind of over it. “I think people are struggling to digest fashion right now,” he says over Zoom from London, where he’s coaxing a cigarette with long, easy drags. “I have not looked at a single show this season. I don’t want to get involved in this idea of a ‘fake’ show. To me, there is nothing more depressing … so I feel like we’re not part of a circuit anymore. We’re just floating. … And I have to say, it’s a fantastic moment. … It’s made me think,” he says, exhaling smoke again, “that maybe fashion needs to go. … Maybe it’s just a bad habit, and we just got used to it.”

But there’s no need to amass JW Anchor bags faster than Elon Musk collects cryptocurrency—at least not yet. That’s because in lieu of a catwalk show, Anderson has created a multimedia project devoted to “new ways to show not just fashion, but artistic output broadly.” And it’s actually pretty major. 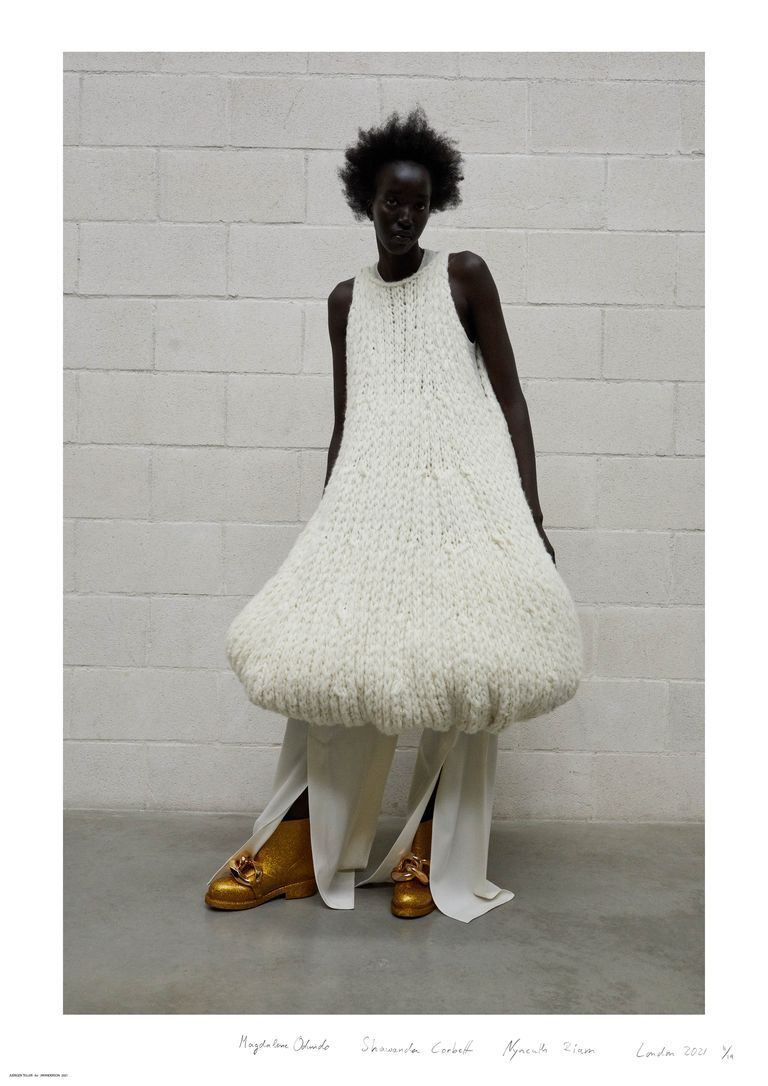 A poster that features the Fall 21 collection

The initiative began with Dame Magdalene Odundo, the Kenyan-born ceramic artist whose burnished vessels have The Met cred, plus the curvaceous shapes of a woman distilled. (Think Alexander Calder + Venus of Willendorf, and you’ll get the idea.) “We’ve treaded in each other’s shadows for a long time,” explains Odundo. “Jonathan is physically dealing with bodies in a tactile manner. I’m visually imagining them. … In a sense, we’re both clothing forms.” The two met in 2017 and instantly connected, but it wasn’t until Anderson saw her graphic print—aptly titled Cat Walk—that “the impetus for a collaboration was discovered.”

Translation: They were about to make some cool shit. But first, they needed more collaborators, including icon-maker Juergen Teller and Shawanda Corbett, a Long Island native whose mix of fine art, poetry, and performance explores the idea of “a complete body.” (She is currently at Oxford, getting her Ph.D. in Artificial Intelligence.) “I’ve always had a soft spot for functional sculpture,” Corbett says, “and when I first saw Jonathan’s work, I thought, I am here for this, because I know it’s fashion, sure, but also, it’s definitely sculpture! My ceramics background was definitely pleased.” And like Anderson, Corbett was ready for a new version of fashion’s vision. “I’ve always been a fan of it,” she says. “I Ioved, loved, loved, loved watching what Alexander McQueen would do. But traditionally, fashion was built on the ideal woman, man, lifestyle that you ‘should’ want … and the more we accept different body types, the more we open up [the medium] to be even more limitless and infinite. Because bodies will be around for quite some time, hopefully!”

To celebrate them, Anderson’s fall 2021 collection “is a lot more sensual,” he says, “exploring the idea of volume. You have the pompon that’s massive and worn with a silk knitted jumpsuit. It’s volumes of contradictions. She’s very enjoying the beauty in herself, which I quite like!” Then there is a series of blankets merging Anderson’s TikTok-famous knit work with imagery from Corbett and Odundo’s 2D pieces. And the whole package wraps up in, well, in an actual package, which has massive printed Teller portraits of all three creators, plus shots of Anderson’s new pieces as worn by model Nyaueth Riam, who has an art pedigree of her own—the London It girl is a muse for painter Chloe Wise. Also included: a Dear Jon(athan) letter from Anderson himself explaining his mission: “For me, it’s incredibly personal. It’s more than just fashion. And I think that’s what’s been so exciting.”

Which brings us back to the runway show Anderson is definitely not having right now. “Maybe we need to deconstruct fashion,” he says. “Maybe we need someone to show us a future we want instead. … This idea that we’re bound by loads of old people saying, ‘This is how it goes,’ gets incredibly boring. I’ve enjoyed saying, ‘I have no idea where this is going. I have no idea if it can work. Why don’t you come with me on a journey about making mistakes? And that’s what I love about this moment,” he says and smiles—a good one, the kind that crinkles his eyes. “It’s incredibly stressful. But if it weren’t for this moment, I wouldn’t have seen Shawanda’s show. I would never have had the balls to ask Juergen Teller to shoot with us. … I love what I do, what we do. But I think we just need to be a bit more personal, ultimately, instead of all blockbuster glam.”

And suddenly, like after the most liberating of breakups, I want a cigarette too.