For its latest fashion campaign, Fendi tapped not one, not two, but three generations of Kardashians.

Momager Kris Jenner, mogul Kim Kardashian West, and 5-year-old style icon North West star together in the 10th anniversary campaign for Fendi’s Peekaboo handbag. WWD shared a first-look at the campaign titled #MeandMyPeekaboo, which features the trio frolicking in a field with their Fendi bags, as you and your family also probably do. 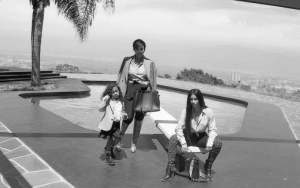 In addition to the imagery, Kris, Kim, and North will also star in a short film for the campaign. And really keeping it all in the family, the video will be set to the backdrop of Kanye West’s “Love Lockdown.”

“The idea was to expand the concept of family, as it’s part of our history, and we wanted other families of women. In the case of the Kardashians, they are all three of them very strong women, with strong personalities. It’s an iconic family, who is known for its appearance, but we wanted to bring more of an intimate side to the table,” Silvia Venturini Fendi, creative director of accessories and menswear, told WWD. 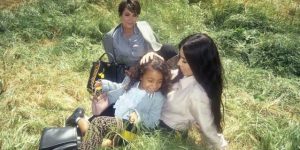 This will mark the second of Fendi’s #MeandMyPeekaboo campaign series. The first, which was unveiled back in April, starred the brand’s creative director of accessories and menswear, Silvia Venturini Fendi, and her daughters Delfina Delettrez and Leonetta Luciana Fendi.

Kim teased the campaign (which is slated to drop in its entirety on July 11) on Twitter, writing “So major to be in a campaign with my mom and daughter.”

Fendi Campaign coming soon! So major to be in a campaign with my mom and daughter 💕 #FendiFamily #MeAndMyPeekaboo