The most impactful fashion trends of the 2010s

As we prepare to enter a new decade, we’re looking back over some of the fashion trends that had the biggest impact on our wardrobes over the last 10 years. During the 2010s, the fashion world saw itself completely transformed with the advent of social media, influencers and eventually, a new awareness of sustainability, all of which had a major influence on the trends we adopted into our daily lives.

From the unexpected colour that reigned for seasons to the denim trend that refused to die, here, we round up the style trends that we think defined the 2010s.

While that certain festival look has been around since the days of Woodstock and had its moments with Kate Moss and Sienna Miller in the noughties, the 2010s saw it reach fever pitch. Flower crowns, fringing, denim cut-offs and crochet reigned supreme everywhere from Glastonbury to Coachella, with ‘festival fashion’ eventually becoming its very own, very recognisable uniform. 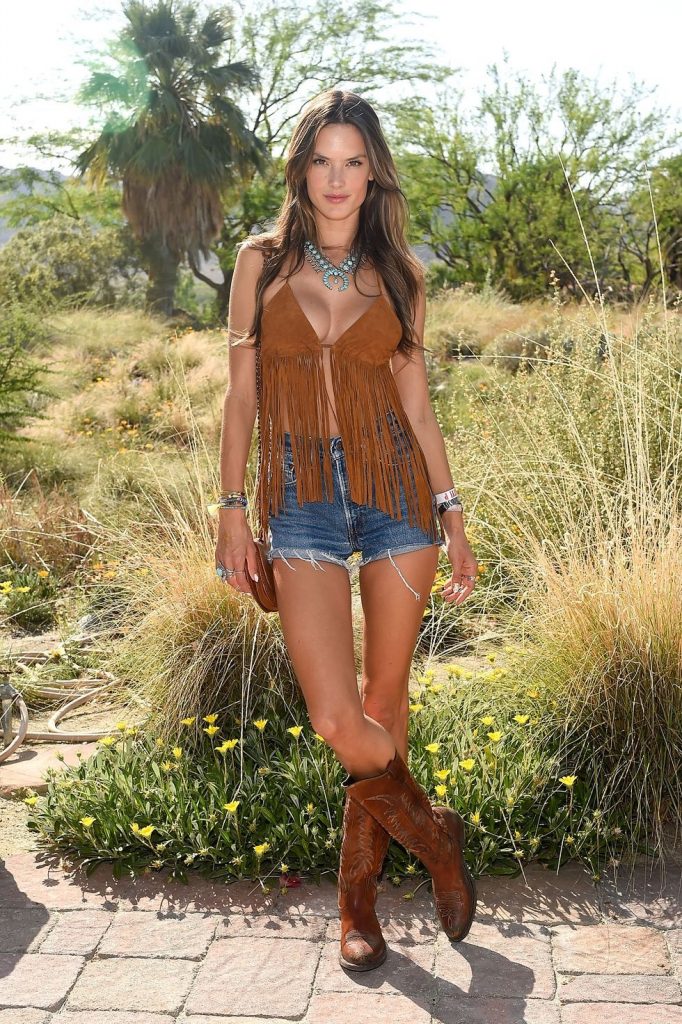 This hippie-inspired style had already reached its height in 2015, and, by then, one of the original festival fashion icons, Alexa Chung, was writing off the entire concept.

“I think it’s a bit naff, some of the iterations on that theme, and how it has become its own style. Coachella, for me, it’s become a bit homogenised — I mean, I was wearing what everyone else was wearing but, like, fucking hell, if I see one more flower crown.” 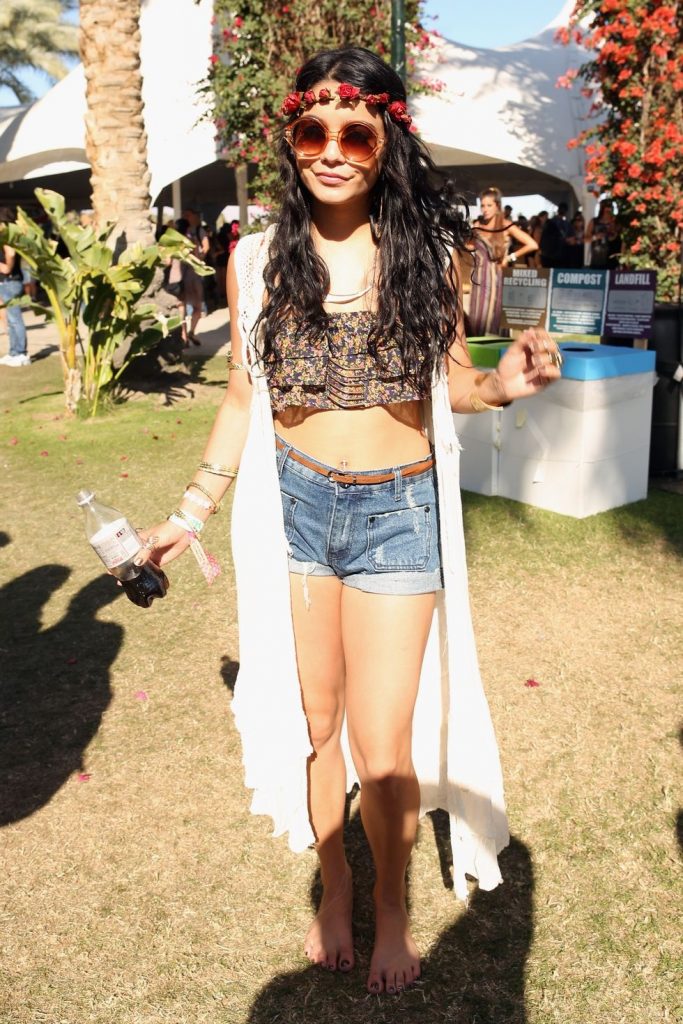 A few years later, Chung went even further with her dislike of festival fashion, explaining in 2018 that she chose to avoid Glastonbury because of how commercialised it had become, thanks to the festival-fashion movement and Instagram.

“It’s a place where you used to be free to express yourself but because of social media now, it’s the one weekend where’s there’s more pressure to get dressed and that doesn’t make sense to me. Festivals should be a time to unwind and celebrate with your friends and have fun.” 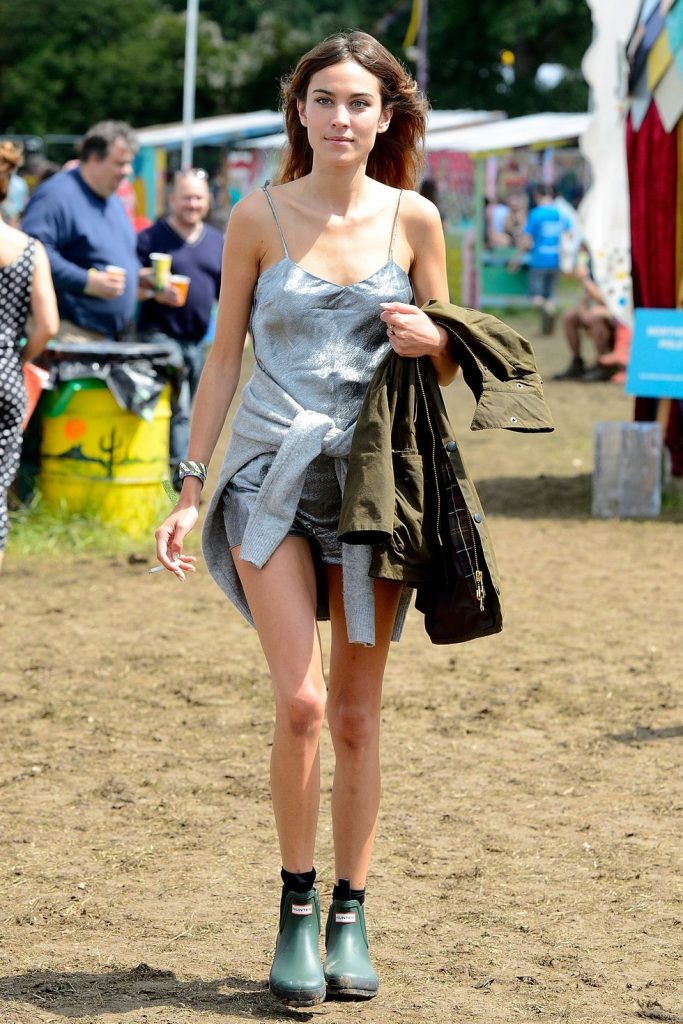 While the predictable uniform of crop tops, denim cut-offs and flower crowns has subsided slightly (making way for brightly coloured hair, luxe sportswear and bum bags), the idea of dressing in this certain aesthetic has certainly lost its cool, but still has a presence for, now.

But what does the future hold for festival fashion? The next decade will surely impact the trend as sustainability takes hold and consumers turn against the one-occasion outfit, presumably moving towards a more practical approach to dressing for a muddy weekend in a field. Well, we can only hope.

The obsession with emulating a certain aesthetic from particular places has grown monumentally during this decade, no more so than the desire to dress like the stylish crowd from Scandinavia.

So-called Scandi style found its place in the fashion sphere thanks in part to the rise of Instagram – and the swarms of hugely successful Scandi influencers that followed, as well as the opportunity social media gave to brands that didn’t hail from the major fashion capitals. The Scandi lifestyle (hygge, lagom, their interiors reputation) helped to increase our fascination with their culture as a whole, while their approach to minimalist, more comfortable and laidback dressing perfectly complemented what was happening on the catwalk. 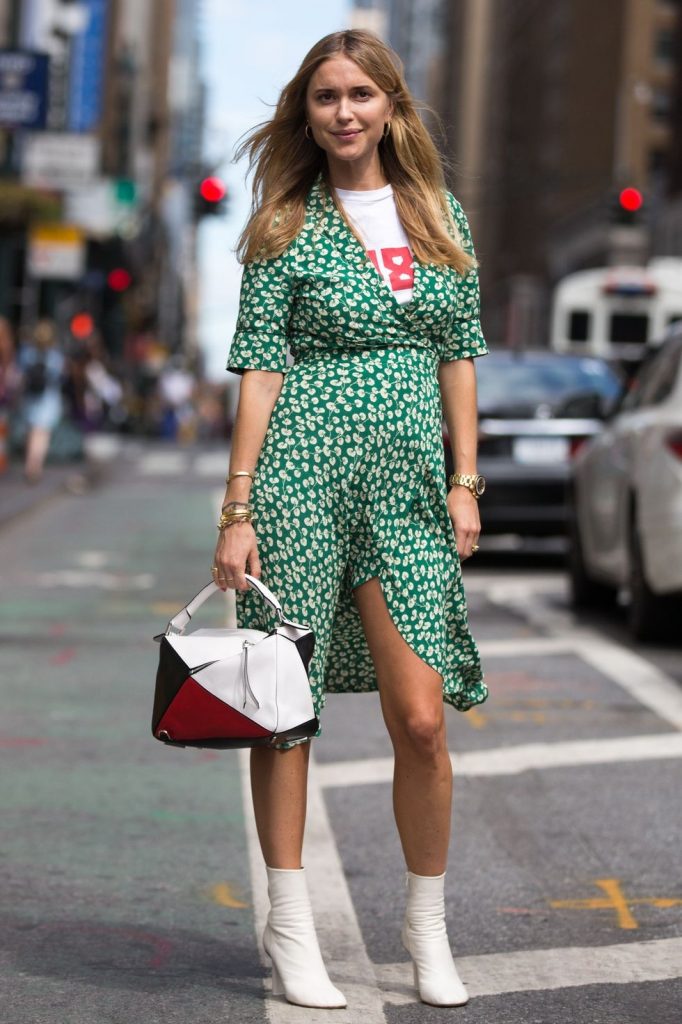 “You can obviously find cool and stylish people everywhere, but it’s not just a matter of style, it is about how confident these women are,” Nicolaj Reffstrup, CEO of Ganni, one of Denmark’s most successful fashion labels, told us. “This comes back to living in a society that is balanced, convenient and less stressful than most other places in the world. The way we built our society is reflected in the girls’ attitudes.”

This attitude was something everyone wanted a piece of, giving women like Pernille Teisbaek, Elin King and Jeanette Madsen enormous platforms, while brands including Ganni, Cecile Bahnsen, Saks Potts and Stine Goya managed to grow into some of the most influential fashion labels in the world. Copenhagen Fashion Week too, put itself on the map in a big way, growing with each and every season and, with the likes of Seoul, challenging the previous notion that we need just the four leading fashion capitals. 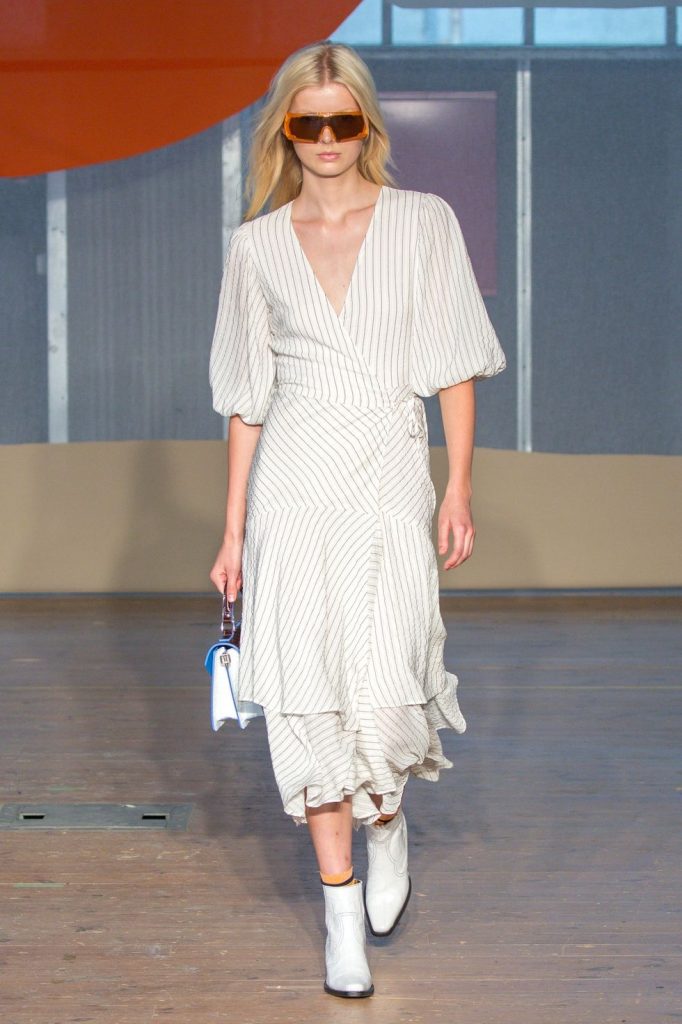 The summer of 2016 saw an unexpected but extremely powerful movement around a colour that went on to be dubbed ‘millennial pink’, spanning the fashion, interiors and even the food worlds.

The strange thing about the millennial-pink moment was that it wasn’t just one singular colour. Varying shades – from rose quartz to peachy salmons and everything in between – seemed to be grouped under the same term – and, unlike most passing trends that become oversaturated almost immediately, it stuck around for a few years. 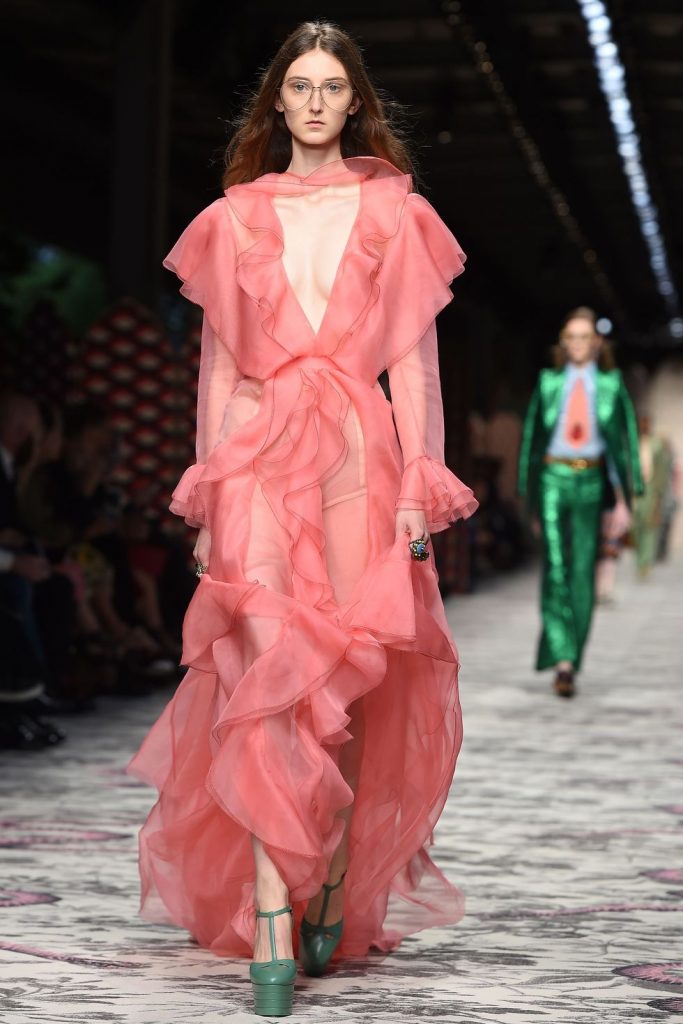 Exactly how and when it entered our consciousness is still up for debate – some argue that it started back in 2012 when a slightly muted Barbie pink found its way into fashion, while others believe that Wes Anderson’s Grand Budapest Hotel (from 2014) was behind the movement.

Either way, the impact was huge, from the way it took over Instagram (with pictures of buildings and manicures, restaurants and furniture) to the catwalks (Gucci, Valentino, Fendi, Fenty – season after season), it was undoubtedly the most impactful colour of the decade. Theories as to why it was so popular, and therefore stuck around for so long, run from childhood nostalgia to its soothing qualities and even that it was a reaction to gender fluidity. 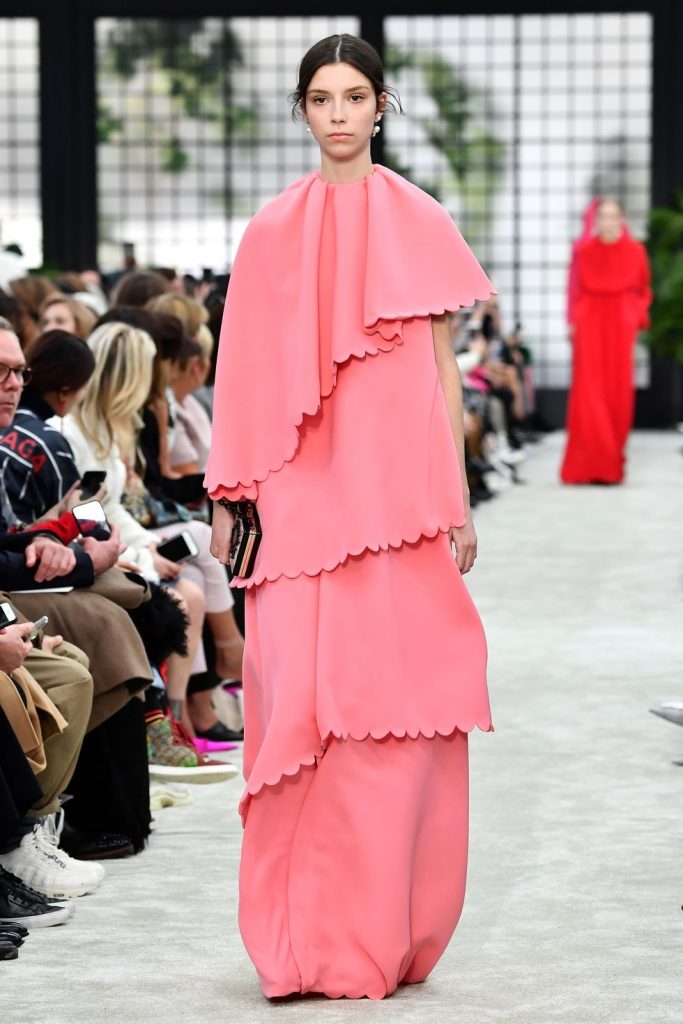 Bum bags, slip dresses, chokers, tiny sunglasses, scrunchies – the 2010s was influenced by the 1990s more than any other time period. In terms of trends, the catwalk harked back to the era time and time again, while some of the biggest talking points in fashion came from ‘90s nostalgia too – take the supermodel tribute to Gianni Versace or the A-list’s new penchant for finding vintage ‘90s pieces for the red carpet (Kim Kardashian West we’re looking at you).

Of course, nostalgic fashion is nothing new – there is a theory that everything in pop culture operates on a ‘nostalgia pendulum’, where what is old finds itself as a hot new trend again about 20 to 30 years later (primarily dictated by the average age of the designers who are leading said trends and feeling nostalgic about their childhoods) – so a ‘90s comeback was not entirely unexpected. 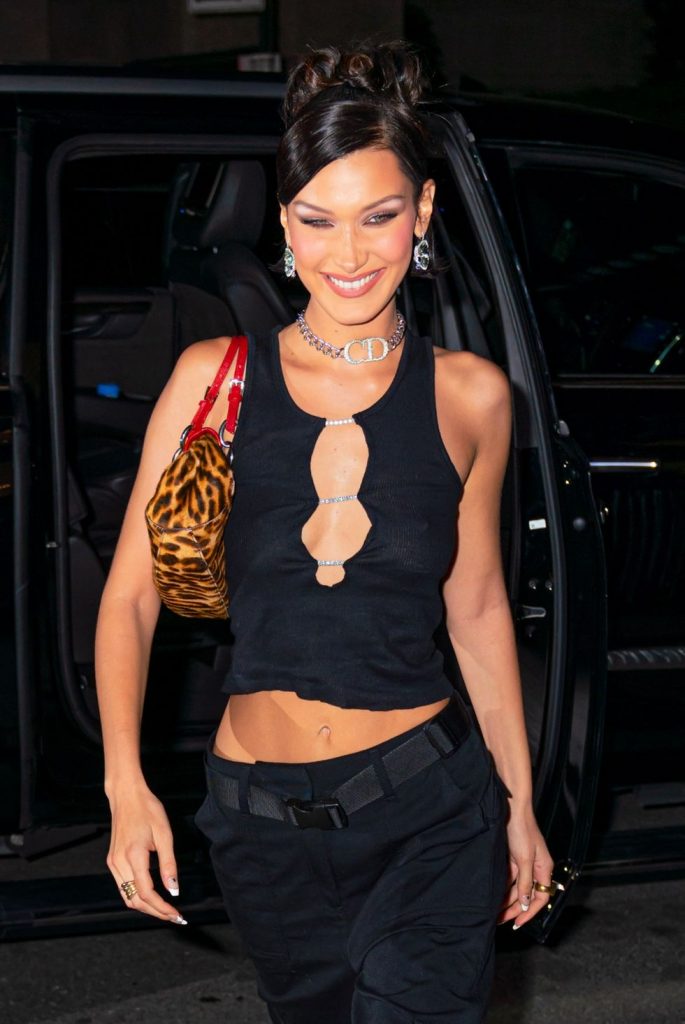 Many designers revisited their roots or perhaps even what had been their inspiration in going into fashion in the first place, while consumers embraced fond pieces that were once in their wardrobe, just as is so often the case each decade. However, the impact of nostalgia on what was such a transformative decade for the world meant that is had a far more significant role to play. In 2018, nostalgia was the biggest fashion theme on Google. Can it be that much of a surprise that in an era of Trump, Brexit, social media, climate change and so much more, people wanted a soothing reminder of a different time?

“It raises questions in my mind about whether we are more unhappy with the present time than usual,” Sarah Rose Cavanaugh, director of the Laboratory for Cognitive and Affective Science at Assumption College told Luisaviaroma about the trend. “We feel nostalgic for times in our past that we long to return to, at least temporarily. Could it be that, more than usual, we feel ourselves pulled backward to a time of our lives when things felt simpler, more connected, less divided?”

For many of us, it is difficult to remember a time when it was not acceptable to wear trainers on a day-to-day basis, now that they have become so ingrained as a part of our wardrobes. However, the change in mindset really only came within the last decade, first starting out as just another trend, but resulting in perhaps the most significant fashion shift we have seen in dressing in recent history. 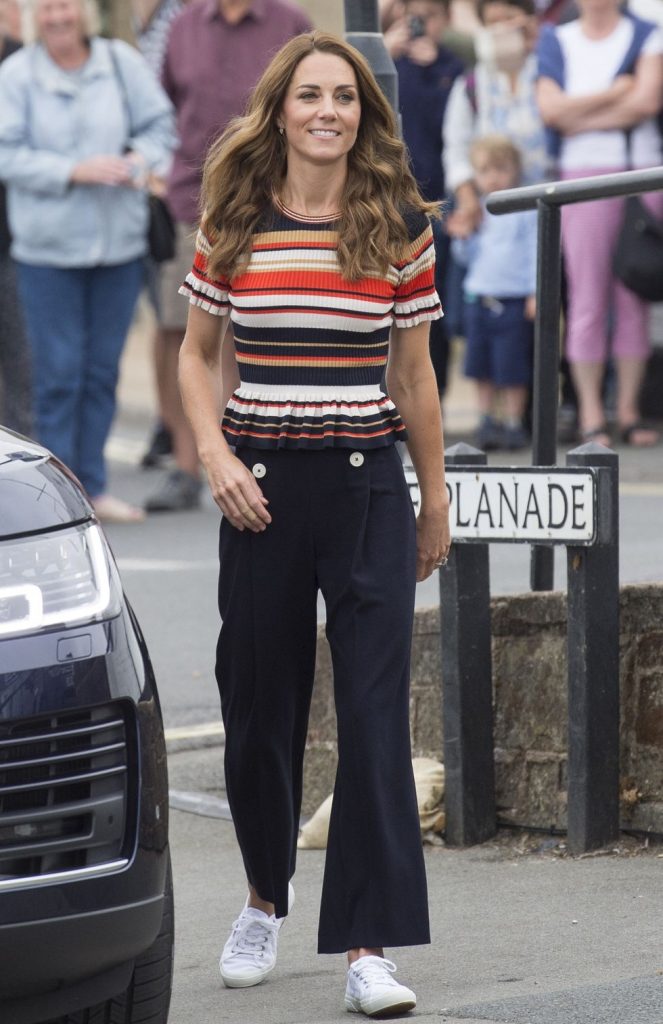 Of course, the first memorable moment that signalled change was when Céline’s then creative director Phoebe Philo took her bow during Paris Fashion Week in 2011, wearing a pair of Adidas Stan Smith trainers. Numerous milestones followed – Victoria Beckham swapping her trademark heels for a pair of box-fresh white trainers, Kate and Meghan making them a permanent part of their famously formal royal wardrobes, retailers seeing buzzy sneakers become the new It-bags, and trainers overtaking heels as the most sold shoe in the UK (according to Mintel in 2016).

One reason that trainers stuck around as much more than a passing trend can of course be linked with the changing place of women in society, where there is less desire to dress for men and instead to put comfort and practicality first, but the movement also nicely coincided with another of the biggest fashion trends of the decade, sports luxe. Which leads us nicely on to… 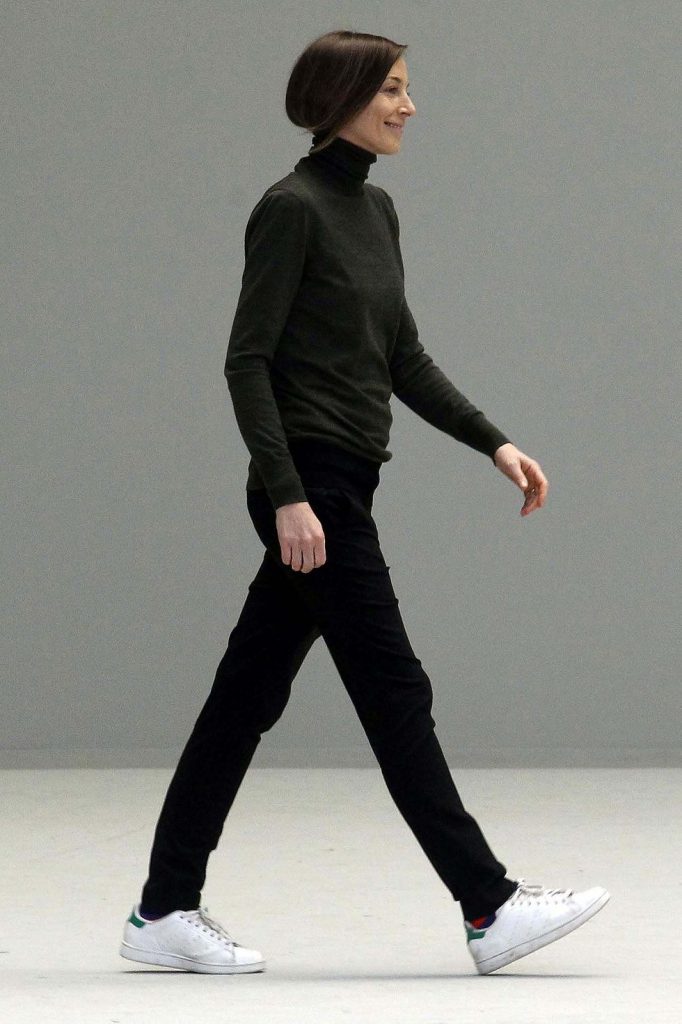 From cycling shorts to sports bras, tracksuits to trainers, the 2010s saw a drive towards fashionable, high-end sportswear, quickly becoming one of the most significant trends of the decade. Athleisure and sports luxe certainly benefitted from the broader wellness movement that took hold, but these were clothes that might be designed to look as if you are on your way to the gym, but would never actually be worn to sweat in. And, although fashion has had its sporty moments in the past, never had this idea of dressing down been so impactful as it was for this decade. 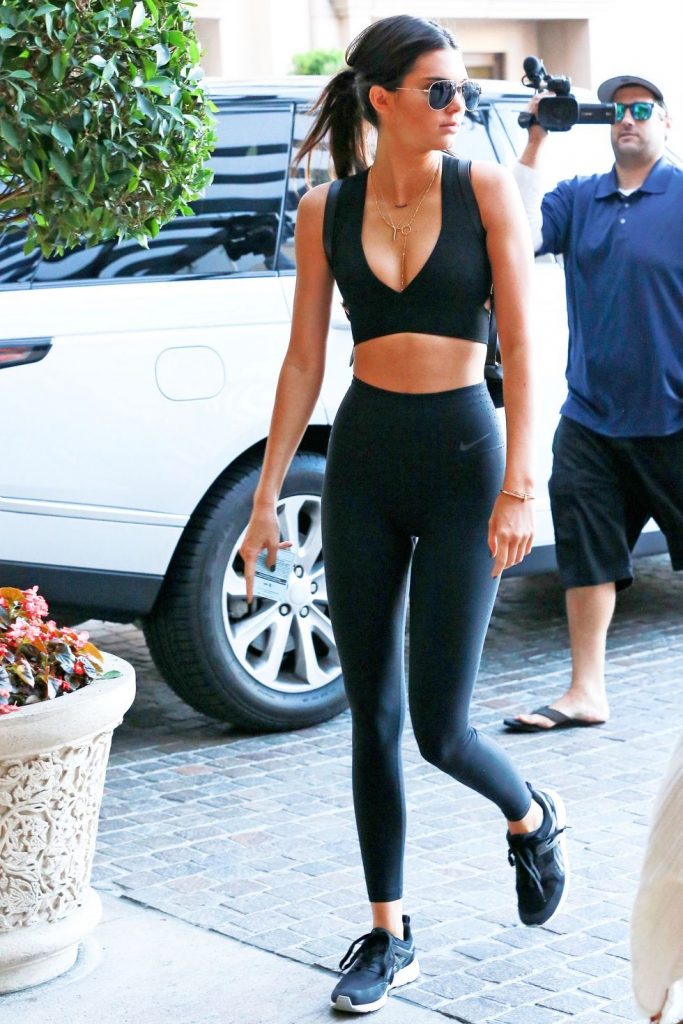 Midway through the decade and everyone from celebrities to fashion editors had fully embraced this casual way of dressing, everywhere from the airport to the office – and albeit it often with a full face of immaculate make-up and a sleek blow-dry (the polish has to come from somewhere) – but how will the trend fare in the new decade? Although sports luxe has shown few signs of abating, the last few seasons have seen a move towards more ladylike and sophisticated dressing, suggesting that in the new ‘20s, we might choose to start dressing up again. 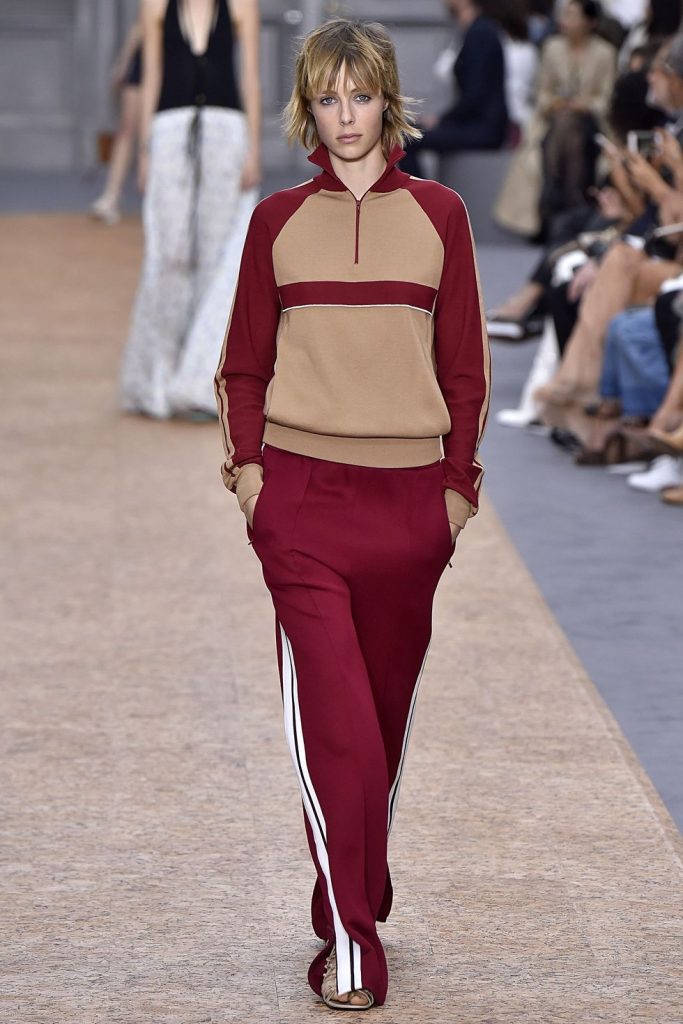 The rise and fall of the skinny jean

When it came to denim, skinny jeans seemed like the trend that would never die, until it finally did. Ever since the mid noughties when they were championed by the likes of Kate Moss, skinny jeans became a mainstay in most women’s wardrobes, regardless of age or body shape. Worn by everyone from young pop stars to members of the royal family, the style dominated the market, with sales of skintight jeans remaining the most popular fit for most shoppers. Take, for example, Topshop, which was selling 20,000 pairs of its skinny Baxter style each week in the mid noughties and into this decade. 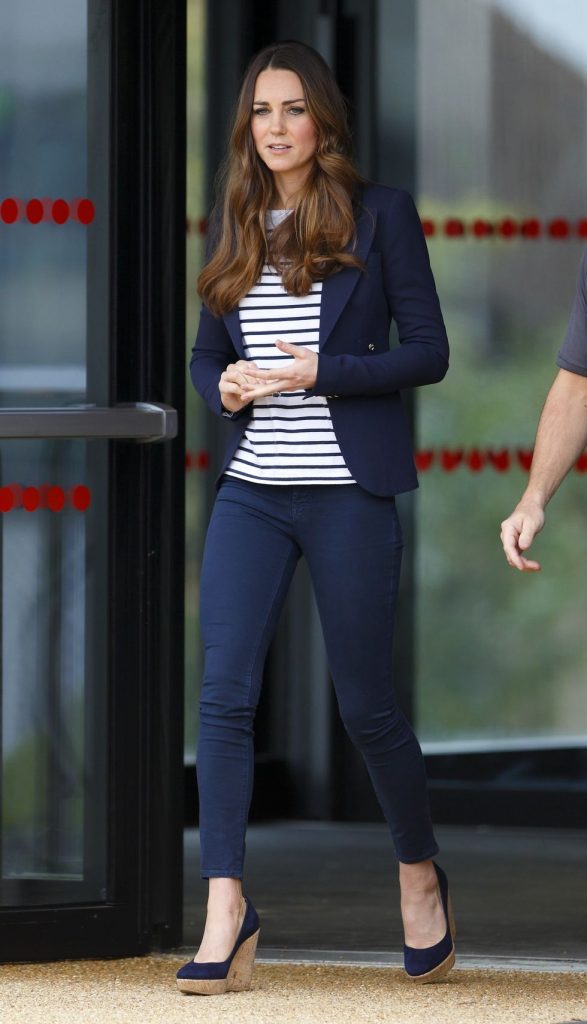 It is not straightforward to explain how skinny jeans remained such a popular style for such a long period of time, particularly because they are also widely thought to be quite an unflattering or unforgiving style, but they somehow entered our wardrobes and refused to fall out of favour.

However, nearly 20 years after they first became fashionable, by the end of 2018, the style had finally had its heyday, and we switched the stretchy, tight style for something straighter, looser and higher on the waist. According to global fashion search engine Lyst, searches for ‘Mom’ style jeans overtook skinny jeans in 2019, with shoppers finally embracing a new look.

But, having been such a dominant wardrobe staple over such a long period of time, there is every chance that we haven’t seen the last of the skinny style. Here’s to 2020.