The life of a celebrity bodyguard is anything but glamorous. At any moment’s notice, he or she must be able to separate the obsessive fans from the so-called regular fans, tend to a broken ankle on a private hike, or move luggage. Cosmopolitan.com recently spoke to a bodyguard who has more than 20 years of experience protecting the rich and famous. The bodyguard, who spoke on the condition of anonymity, primarily takes care of musicians. He also works with athletes and actors, and heads a company that protects clients who travel abroad, including artists on tour. When he’s not protecting someone famous on a deserted highway in one of the major carjacking capitals of the world or getting out of a burning car in Africa (true story), he teaches courses on celebrity protection and behavioral intelligence “at the Harvard of our industry.” Here are some of his insights on Hollywood, whether or not “diva demands” are real, and the dangers of becoming a “buddyguard.”

#1. Celebrities will recommend their bodyguards to other celebrities. “If the celebrities, handlers, managers, or agents take a liking to you, that might be what gets you the job versus whatever background, qualifications, or skill set you have. A lot of people who do work in this business have worked red carpet events like the Grammys and Oscars. Maybe these roles aren’t necessarily glamorous, but that exposure where the celebrity or handler walks past you in the green room, that recognition is how you make it to the big leagues.”

#2. Celebrities expect you to live on their time. “Our schedules aren’t our own. Depending on the type of client you have, there might be situations where you eat when they eat. You might not eat at the same table with them. If you go to a fancy restaurant and there’s a low degree of risk, you bring more attention to them if you stand over their shoulder with an earpiece. Instead, you sit at your own table and keep a low profile. And the best way to keep a low profile is to have a plate in front of you.”

#3. They’ll give little notice for going halfway across the world. “The client’s life is fast-paced and unpredictable, and that means by default the bodyguard’s is as well. That can make things like relationships and planning your personal life difficult. But I have had the opportunity to see the world several times, doing something I love — helping others. I come from a pretty humble background … so to be able to be in a profession that allows me literally to be in Tokyo one day and Egypt the next is pretty amazing.”

#4. Celebrities will take advantage of overly friendly bodyguards. “We’re not their friend and it’s easy to become what I call ‘buddyguards.’ When you cross the line, it’s hard to get back. All of a sudden, this person starts thinking of you as part of the entourage. That’s when they start asking you to do things that are outside your area of responsibility. As opposed to grabbing a suitcase so the celebrity can make the flight, they expect you to walk the dog or pick up their girlfriend’s kids. That has nothing to do with security. One thing a celebrity hates to hear is ‘No,’ so you have to establish where your line is and make sure it doesn’t get blurred.”

#5. Celebrities are narcissistic by nature. “That’s not necessarily a bad thing, but it’s part of what drives them from whatever past they were in — a room full of wannabe actors or 20 guys who could play basketball. That narcissistic personality also means that a lot of times they don’t think about some of the day-to-day things that affect others. Security is around them more than their spouses, and they might forget birthdays, or forget that you have children, or that your children might get sick or have a special school day. They just expect you to work and do the job and do the things that facilitate their needs.” 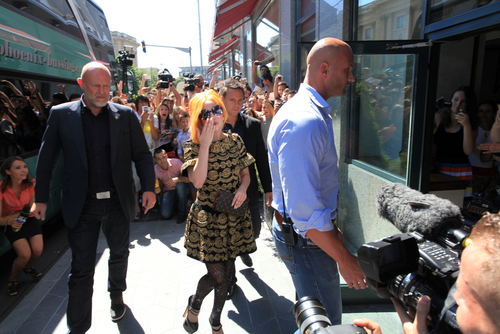 A disguised Lady Gaga amidst her security | Image: Shuttershock

#6. “Diva demands” can come from anyone. “All high net-worth individuals have their quirks, however, what the general public would classify as ‘diva demands’ from celebrities are really no different than what you would find from the CEO of a Fortune 500 company. Both are highly driven, specific about their request, and want things a certain way.”

#7. Celebrities don’t just hire bodyguards to protect them from people who can hurt them. “People think the focus is on guns in our profession, which really isn’t true, and we probably have to thank Hollywood movies for that. While a firearm is one ‘tool in the toolbox,’ what I make sure I have with me day in and day out when providing protection is a portable medical kit. Statistically speaking, the client is much more likely to trip over a wire backstage and suffer a sprained ankle than get descended upon by snipers where I have to get into a gun battle … Justin Bieber [who is not a client] recently fell through a trap door on stage. That’s something we’d love to be able to intercept but the reality is there’s only so much we can do. Mishaps happen. For whatever reason, he stepped over it and fell in. The big piece for us is we have to protect the clients from physical harm but we have to protect them from embarrassment and sometimes, like this time, it’s a combination of both.”

#8. Celebrities may put bodyguards in awkward — and sometimes illegal — positions. “If you aspire to work in the industry and you’re going to do whatever it takes and you get a phone call from Snoop Dogg, you should know that there’s probably going to be marijuana at some point or another. In some places, it’s illegal, in some places, it’s not. The first person that’s going to encounter a problem with law enforcement is security. If they’re doing something illegal, you’re that buffer between them and the public, and the buffer between them and law enforcement. If I don’t want any joint problems, Snoop Dogg or Willie Nelson aren’t people I would want to be around.”

#9. Social media puts celebrities at higher risk. “[It] has made the job exponentially harder. It’s allowed fans the perception that they are engaging in direct conversation with the celebrity. The issue is that the obsessive fan cannot make the distinction that when the celebrity is saying ‘good morning’ or ‘I love you all’ on Twitter that they are not just talking directly to them. That, combined with location-based services that geotag whereabouts and the photo-centric apps like Instagram that give visual references, and the opportunity increases for those that don’t have the best intentions to track the celebrity.”

#10. Celebrities are both unpredictable and totally predictable. “Nothing surprises me anymore. I find those who are new to ‘celebrity’ make the same pitfalls and mistakes. A guy gets a recording contract and all of a sudden, he buys 20 cars and gets in trouble with the girls and ends up on TMZ. There are also those that have learned how to navigate and make even the bad press work for them. We see that repeat over and over again.”