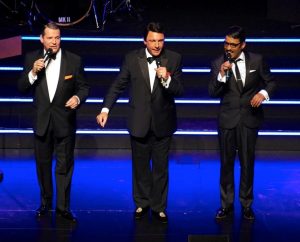 Largely associated with Las Vegas, The Rat Pack was the talk of the town in 1960s, putting up impromptu performances and selling out shows. At that time, hotel-casinos were known to put up quirky marquees to tease visitors who would flood the city just to catch a glimpse of the original cast. In 1963, the Sands marquee read: “Dean Martin, Maybe Frank, Maybe Sammy.”

In collaboration with WorldWide Entertainment UK, British Theatre Playhouse will be presenting The Definitive Rat Pack at the KL Hilton on July 1 at 8pm. Seen by more than 10 million people worldwide, the crew consisting of Stephen Triffitt, Mark Adams and George Daniel Long, alongside nine West End musicians are sure to transport you to the golden era with Rat Pack favourites such as “The Lady Is a Tramp”, “Sway”, “Come Fly with Me”, and “I’ve Got You Under My Skin”.