JJ Martin on living in Milan, her brand, and obsession with all things vintage

“I don’t really mind not looking like anyone else,” says JJ Martin, the Los Angeles-born, Milan-based founder of the fashion label La Double J. “I’ve never had that problem. I actually kind of like it.” Known for exuberantly printed clothing, today Martin is staying true to form, dressed head-to-toe in eye-popping pattern, as she shows me around her sunlit apartment with her adorable pug, Pepper, trotting at her heels. “When I moved to Milan, I brought my suitcase full of vintage clothes—I remember walking around the city streets with people staring at me, thinking, “What are you wearing?” Now everybody wants to join in!” 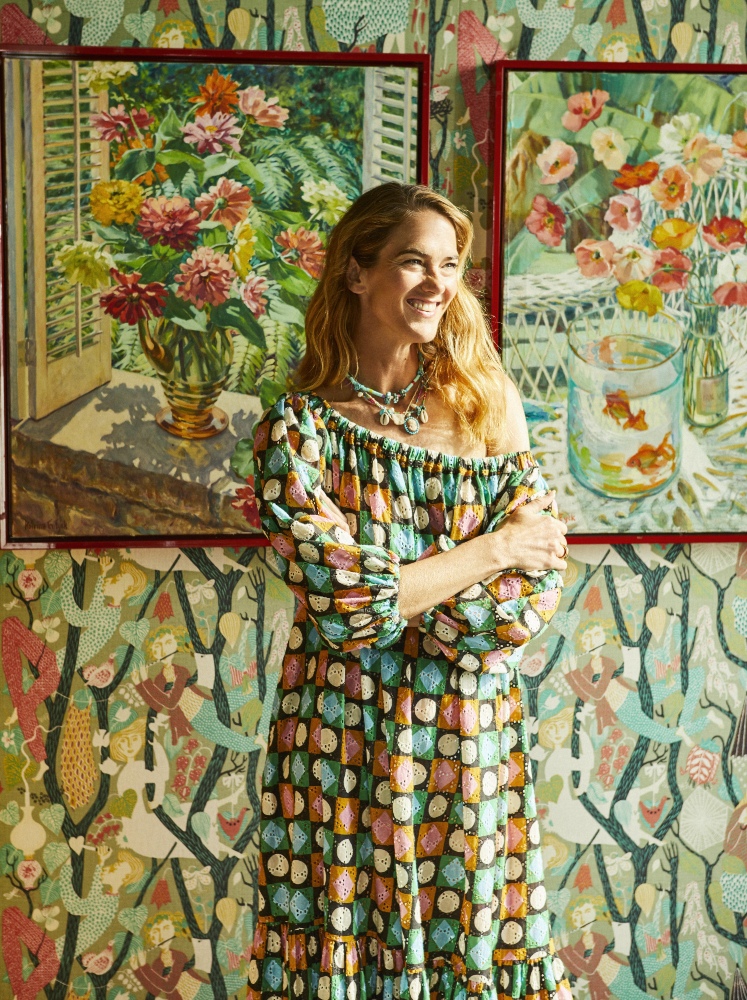 Martin is no wallflower when it comes to her fashion picks.

Christened Jennifer Jane, JJ gained her nickname when she started high school, to differentiate her from the other three Jennifers in her class. “I grew up in a very masculine environment. My dad was a hunter and a fisherman, and I used to have a bowl haircut and go on camping trips wearing my,” brother’s hand-me-downs, she recalls. As a teenager, she rebelled, got a perm, and started wearing a combination of tie-dye, pink lip gloss and blue eyeshadow. “I didn’t have any taste at all. And when I look back, I had no one in my life or orbit who had any either! But in my heart, there was always this attraction to fashion— I dreamt of being in that world, but I had no idea how to get there.”

Instead, Martin studied rhetoric at the University of California, with a view to going to law school, but ended up working in finance at Paine Webber in New York, followed by a role in the marketing team at Calvin Klein. It was during her time living in Manhattan that she discovered her passion for all things vintage. “I became kind of addicted—I’d go to Chelsea Flee Market every single weekend,” she says. “ I loved the thrill of finding an incredible fur coat for $12.” Printed or embellished pieces held the strongest appeal. “In 25 years of collecting vintage, I’ve probably only bought two black things.”

While living in New York, she met her husband, Andrea Ciccoli, at a party, and the couple relocated to his native Milan a year later, where a chance encounter with the editor of a now-defunct fashion-news site gave Martin her entry into journalism. Her lively show reviews caught the eye of the style critic Suzy Menkes, who asked her to write for the Tribune, and over the years she worked as a contributing editor to Harper’s Bazaar US, WSJ and Wallpaper magazines, scoping out the very best in Italian fashion and design. “I learnt that the Italians appreciate beauty, “she says. “They see the importance of having friends and family around and creating an environment where all of that could be enjoyed.”

Milan has been Martin’s home for 18 years, but initially she found it hard to adjust to life there. “I’m from America, where it’s all about doing, achieving and making more money. Here it’s all about being, and your experience and your state of mind. Essentially, the Italians are just concerned with having a really good time.” 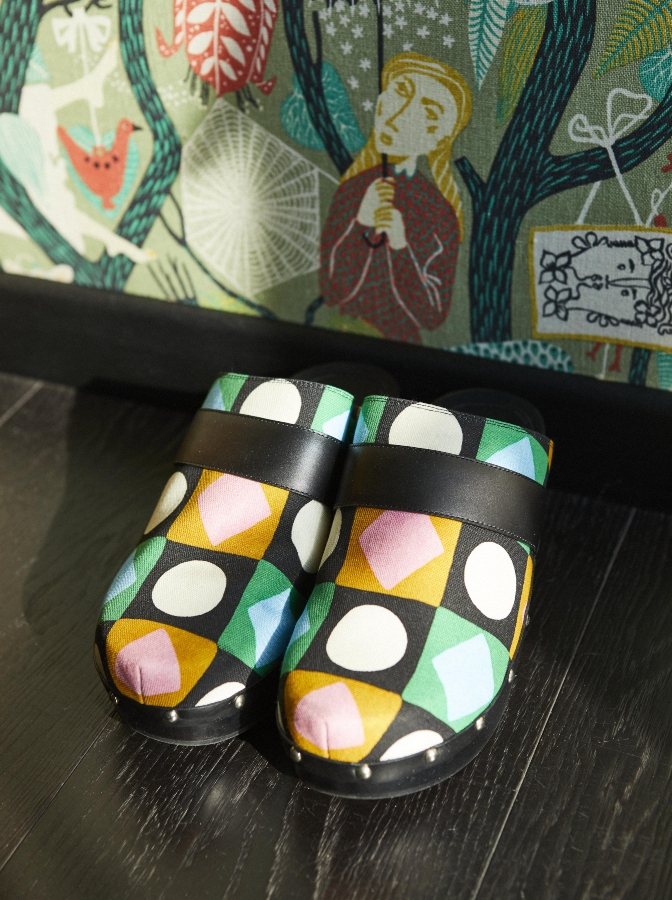 This pair of clogs can be considered a work of art.

La Double J began life in 2015 as an online magazine selling pieces from Martin’s huge collection of vintage jewellery and clothing, modelled by some of the remarkable Milanese women she had met. “I wanted to pay homage to the sophisticated sciùra which is the name for an Italian housewife— but the ladies are extremely chic and nothing you would put on a reality-TV show. I was in awe of them. I couldn’t believe how they had it all together.” On a whim, she decided to design a simple twill dress in eight different patterns that she had unearthed in the extensive archives of Mantero, one of Lake Como’s oldest silk manufacturers. It was spotted by Ruth Champman, the co-founder of Matchesfashion.com which began stocking La Double J, and the label evolved into a highly coveted brand.

Today, the site offers ready-to-wear, swimwear and eveningwear ranges, as well as homewares including plates, vases and bedlinens, with 90 percent of prints sourced from vintage fabrics and wallpapers. Along with Mantero, Martin works with the textile produces Mascioni and the ceramic company Bitossi and continues to shine a light on Italy’s unsung historic producers. “With all the pieces, you can go from as minimal to as maximal as you want, adding on layers just like you would do with clothes,” she says. The brand’s latest capsule collection is called the Goddesses, with six mythical deities reimagined in kaleidoscopic prints. “I’m trying to weave the spiritual aspects of my life into my company and to help women connect to them-selves a bit better,” Martin says. “I’m fascinated by female psychology and all kinds of meditation–I didn’t just decide to put Athena on a pillow!”

Martin’s creative flair is also evident in her apartment, situated on the top floor of a classic 1950s building, which she found after three years of searching and more than 90 viewings. “I’m a big changer, I like to evolve, “she says as we walk through the hallway, whose wall colour she has altered 15 times. The rooms are filled with extraordinary antiques and flea market finds, such as a set of Osvaldo Borsani chairs and an 18th-century Sicilian plaster bas-relief on the wall in the dining-room. In the living space, there is a huge green sofa from De Padova, and a mirror from a trip to Pesaro, a small Italian town on the Adriatic Coast. The armchairs are covered in vintage Holliday and Brown fabric from Prada’s 2004 collection, while artworks include a portrait by Karl Lagerfeld for Fendi, and a water-colour that the artist Ruben Toledo sent to thank her for an article she had written about him. Retro Stig Lindberg fabric lines the walls of the guest bedroom, over which she has hung pictures of flowers painted by her great-grandmother in Los Angeles. The flat also has an incredible wraparound­ terrace that benefits from an abundance of jasmine and wisteria, and spectacular views over the city, including the Duomo; Martin has paved the space in blue glass tiles and installed custom-made benches by Dimore Studio. 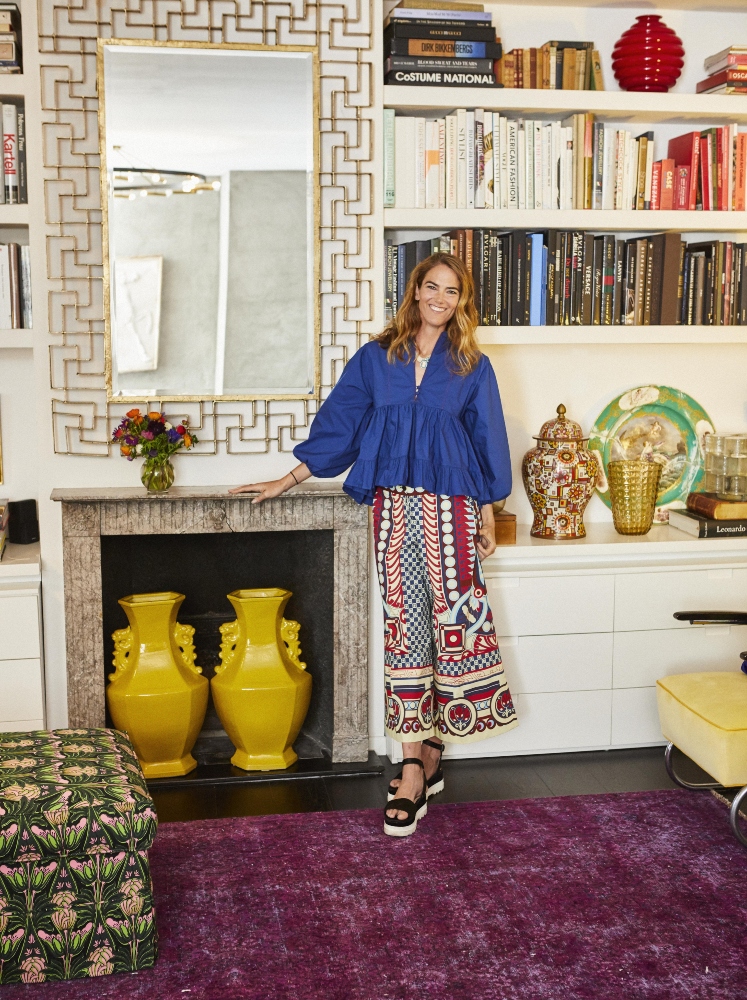 Naturally, Martin’s wardrobe also contains a host of vintage treasures, alongside colourful and flamboyant pieces from La Double J. There are beautiful Valentino and Pucci designs, an embroidered floor-length Yves Saint Laurent dress and an Oscar de la Renta gown from the 1970s. One wall is entirely covered by a rack that contains shoes by Miu Miu, Loewe, Aquazzura, Marni, Prada, Gucci and Ferragamo. Another obsession, perhaps? ‘I do love shoes,’ she says, laughing. ‘At La Double J it’s all about good vibes. The clothes make you smile – it’s playful, easy fashion. My real objective is, “Let’s just make the world a little brighter.” 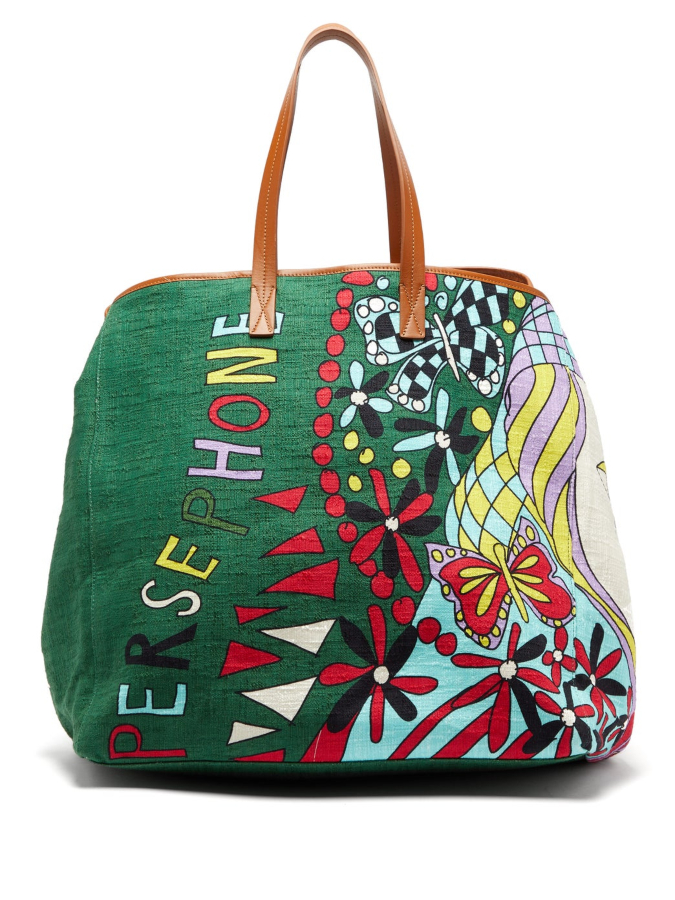 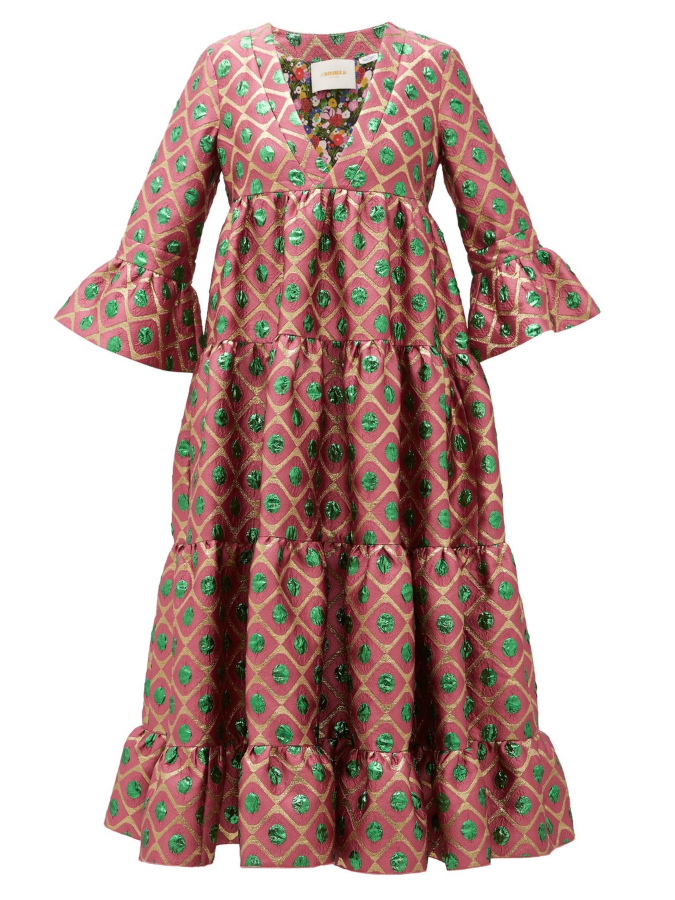 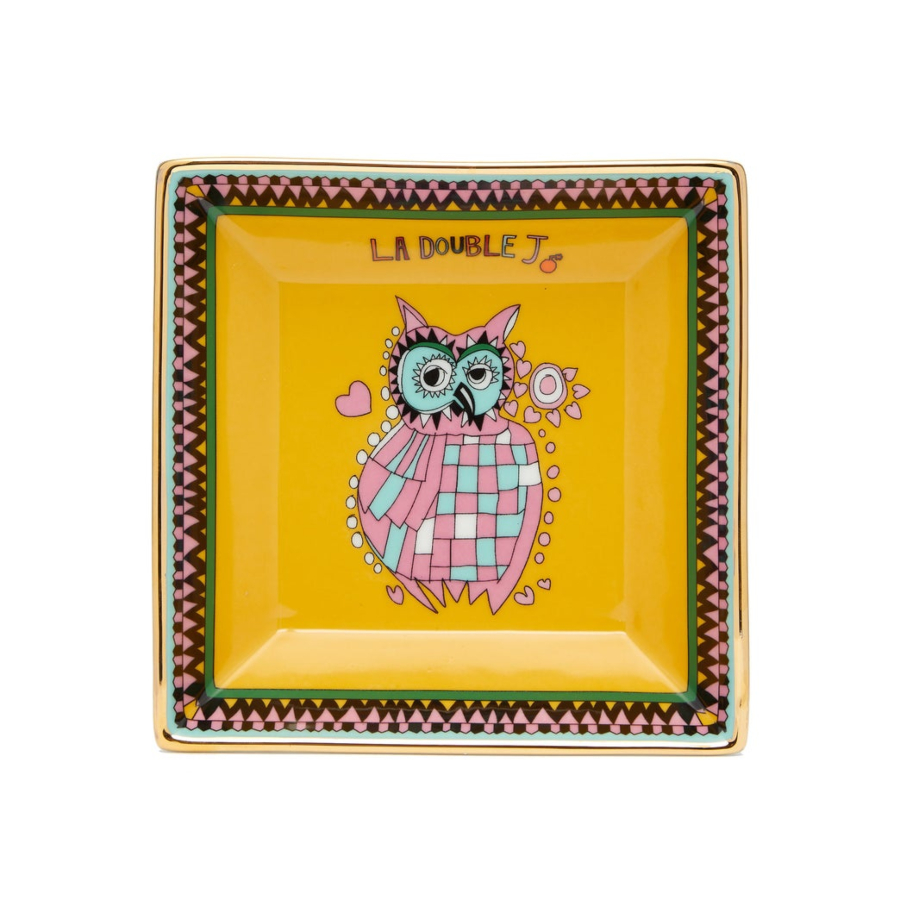 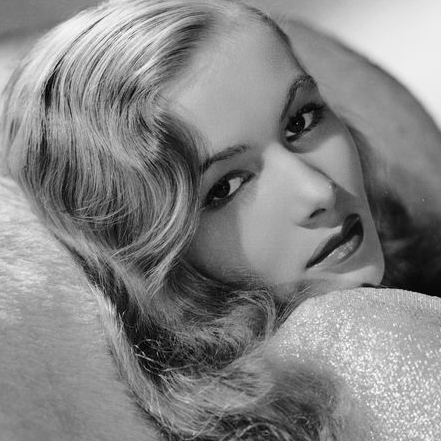 13 Vintage Hairstyles To Be Inspired By This Summer 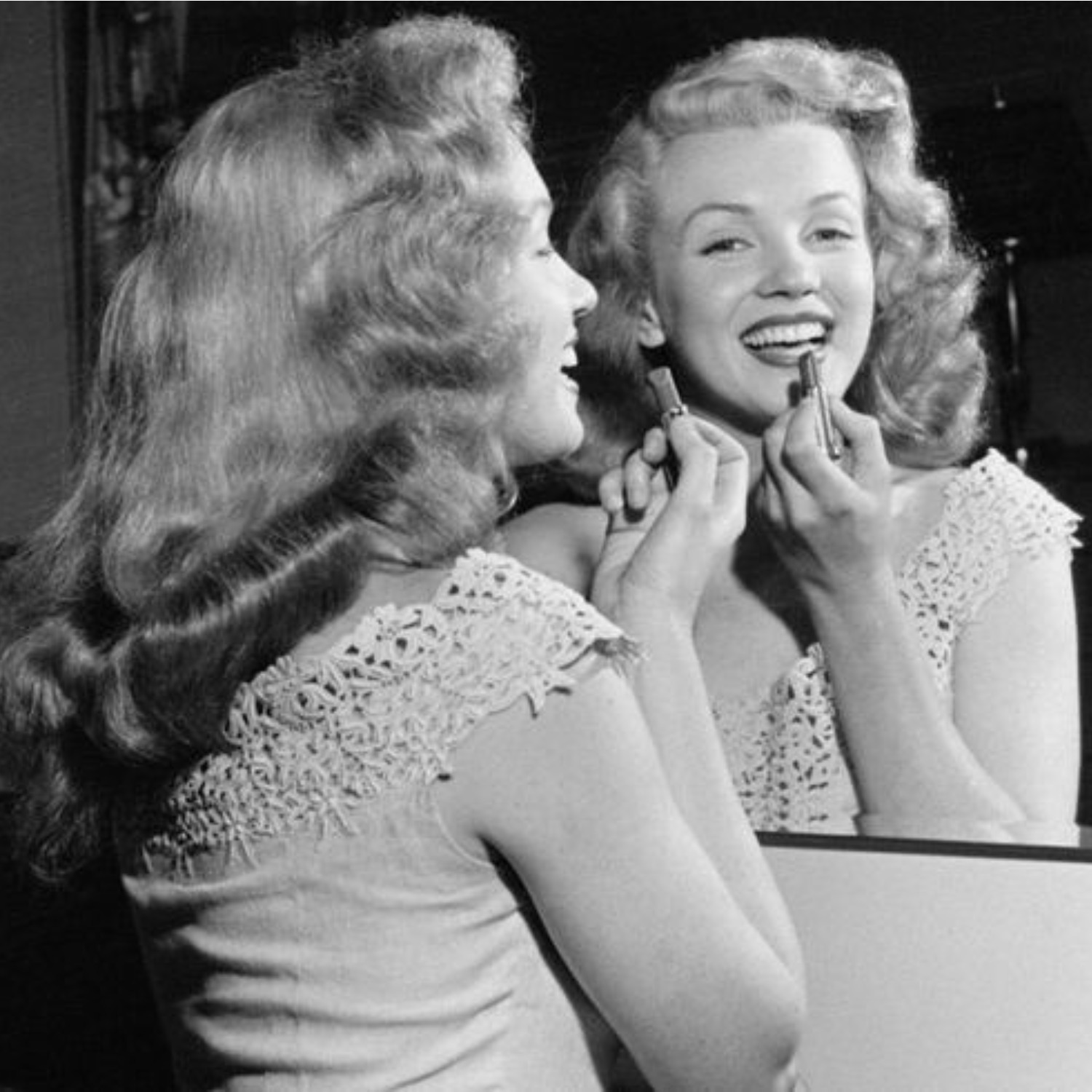 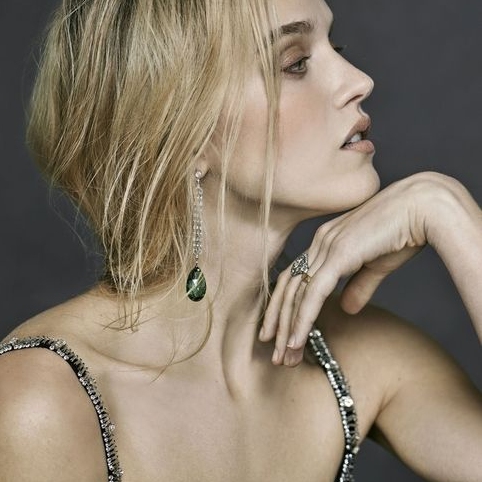 Everything You Need To Know About Buying a Vintage Engagement Ring