Delphine Ninous, A Parisian in London 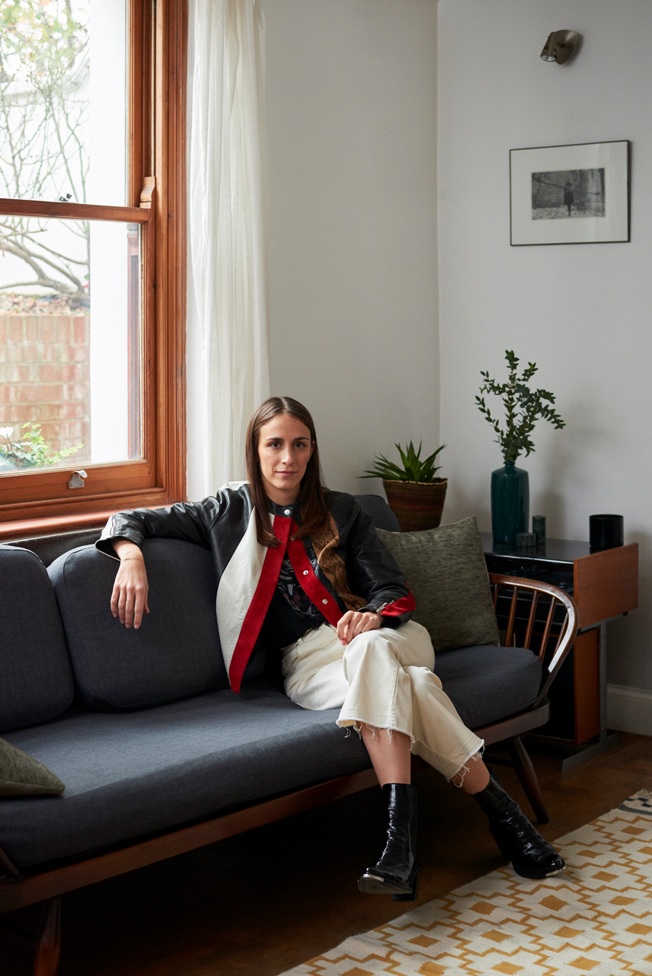 Delphine Ninous in her living room wearing a lambskin jacket, jeans and jersey T-shirt from Belstaff

“I love this part of town,” says Delphine Ninous when we meet at her house in Canonbury, London. “I can take my son to the park just aorund the corner but there are also cool bars and restaurants nearby, so I have the best of both worlds.” The French designer moved to London after joining Belstaff four years ago, and since taking over as creative direction in 2016, she has reinvented the British luxury brand, once synonymous with men’s waxed cotton and leather motorcycle fear, in to a label that is just as relevant for female customers today.

Growing up in Paris as an only child, Ninous would join her mother on trips to the city’s museums and galleries. “One of my first memories of an exhibition at the Palais Galliera celebrating the couturier Paul Poiret,” she says. “It was full of beautiful materials and striking shapes that left a lasting impression on me.” She knew she wanted to be a designer when she was 6, and was able to jump ahead a year at school thanks to her artistic talents.

“I’ve always loved drawing clothes, although at that age it was mostly princess dresses,” she says, laughing. After secondary school, she enrolled at the prestigious fashion design college, Atelier Chardon Savard, before a challenging first job at Christian Lacrois. “It wasn’t easy,” she says, “because the mentality in Paris fashion houses is tough – no one explains anything to you. If you survive, it means you’re good.” 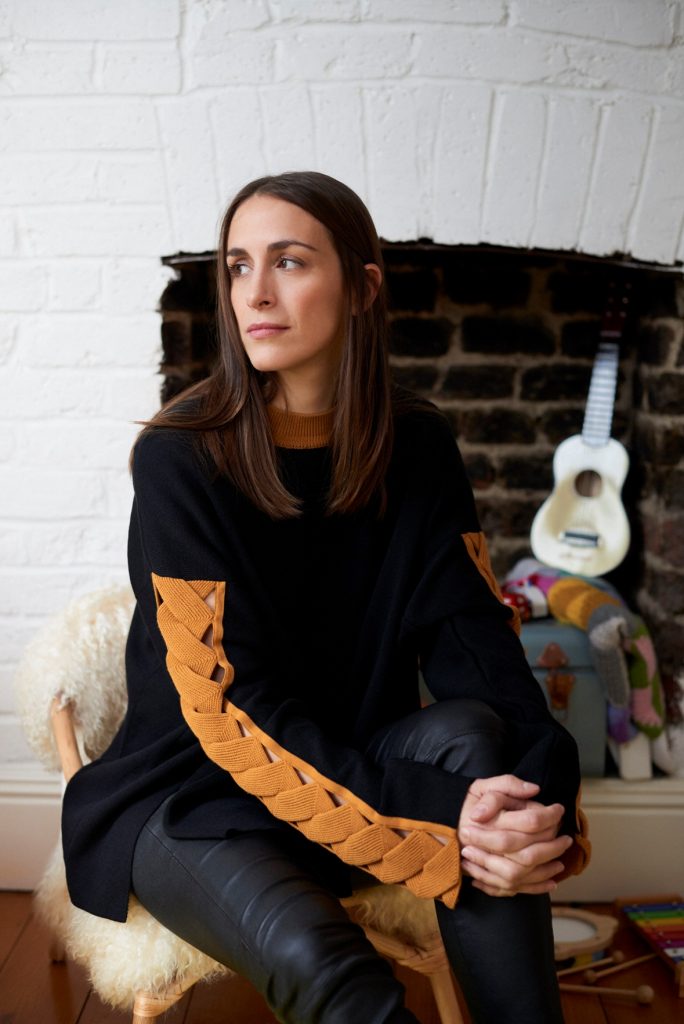 Ninous is wearing a Belstaff cotton jumper and leather trousers

Not only did Ninous survive, but she went on to thrive: at Isabel Marant, Diane Von Furstenberg, Comptoir des Cotonniers, and Paul & Joe, before joining Belstaff as head of womenswear. After spending time in the archives delving into the brand’s 94-year history, she set about feminising the women’s line, softening fabrics and the silhouettes, while also staying true to its DNA. “One of the first things was to identify the Belstaff woman and to give her a voice,” she says. “Of course, she can ride a motorbike, but it’s not just about motorbikes; it’s mroe about the adventurous spirit that biekrs have, and the pursuit of freedom.”

Accepting the job also meant moving to London for the first time, where she now lives with her boyfriend and their 18-month-old son Victor. “I lived in New York when I was working for DVF, but London is great because it has the same energy but also a sense of culture that I felt was missing there.” The house is a treasure trove of vintage 1950s and 1960s pieces, some from her old apartment in Paris, including an ornate mirror that she spotted at Clignancourt flea market, and several eBay finds. “I love this house because it’s easy to invite lots of friends over for dinner, and the living room is a cosy spot to read a book or have an aperitif.” 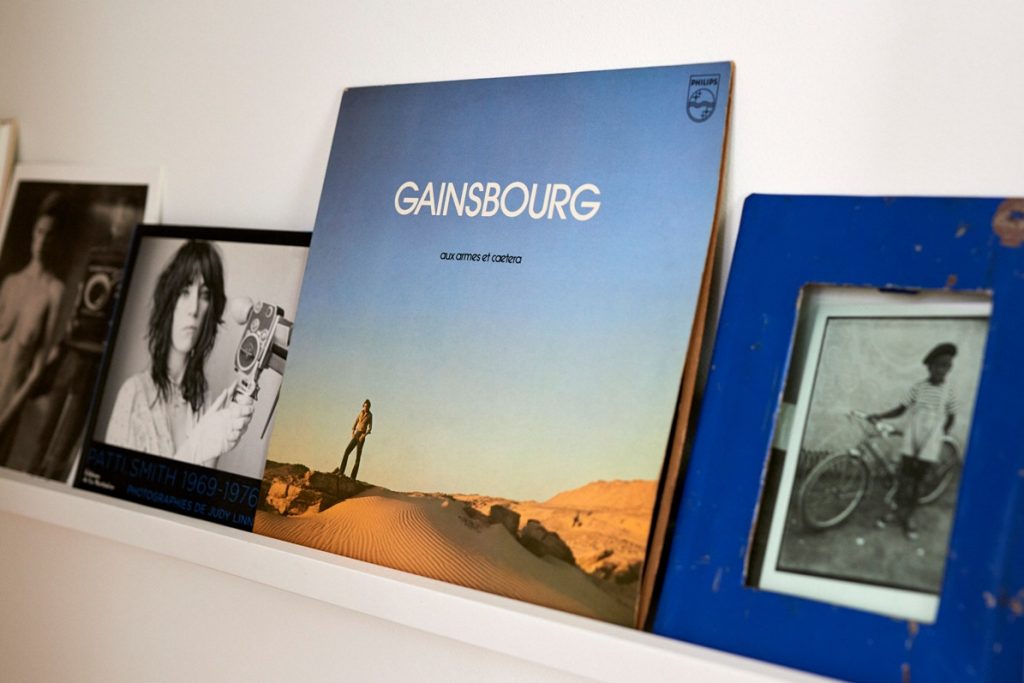 In the upstairs hallway is an intriguing display of memorabilia, including a Serge Gainsbourg vinyl album, Aux Armes Et Cetera. “I’ve listened to Serge, Charlotte – the whole family really – since I was a child, and they have definitely influenced my style, along with other musicians like Patti Smith. I also love Romy Schneider; do you know her movie La Piscine? That’s my all time favourite.”

Ninous’s wardrobe holds an archive of labels she has previously worked for, mixed in with newer purchases – plain Acne shirts, bohemian dresses by Chloé, APC jeans, dainty gold jewellery from Monsieur Paris, and smart Céline trousers. She describes her own aesthetic as masculine/feminine: “I’m not girlie but I still like to be elegant. On a typical day, I’ll wear our Marving-T leather biker jacket over a silk shirt, or I’ll mixed tailored pieces with something delicate and soft.” But to everyone else she is the embodiment of effortless French style – the coveted je ne sais quoi.

A LOOK INSIDE DELPHINE NINOUS’S HOME 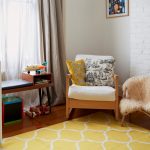 Victor’s room is bright and cheerful 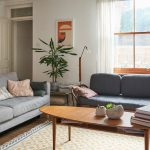 The living room is decorated according to her style 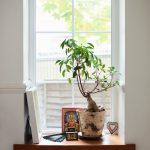 An image of Hindu God Ganesha sits on the windowsill 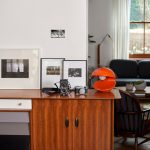 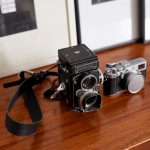 A closer look: on the sideboards, there are vintage cameras along with other interesting pieces 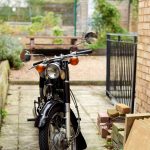 True to the Belstaff image, a black motorcycle sits outside the apartment 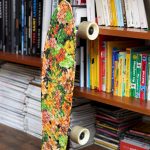 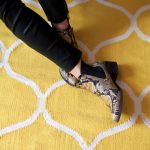 Pairing neutral colours with unique prints and colours, her style is very distinct