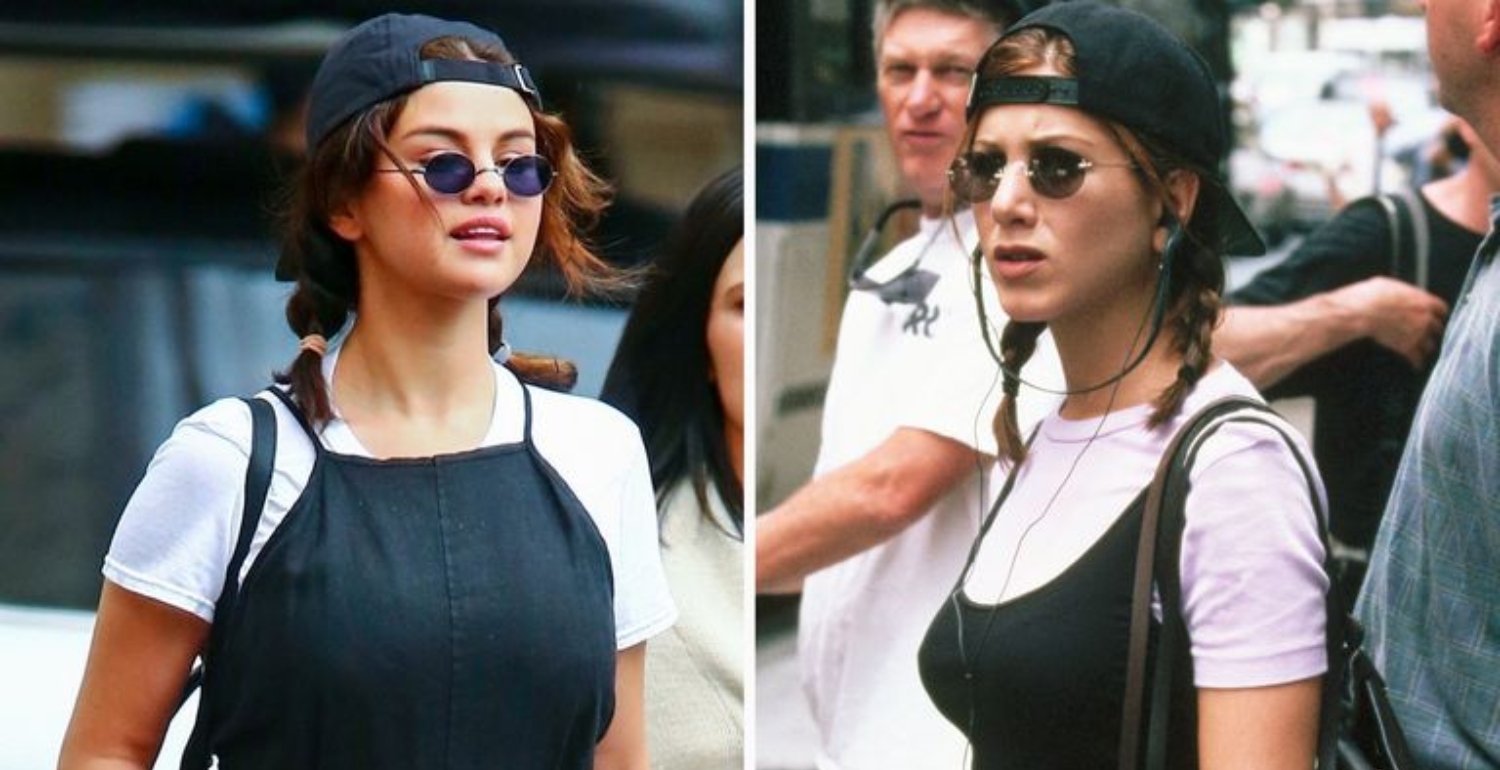 People /
Celebrity Watch
But how long until she gets “the Rachel” haircut?
By Nicole Saunders

The ’90s fashion trend is here to stay, at least if you’re Selena Gomez, who recreated an outfit previously worn by Jennifer Aniston.

Gomez was snapped on a walk sporting an outfit that made us do a double take. She layered a white crewneck T-shirt under a navy jumpsuit and paired her laid-back look with white chunky sneakers.

The singer-actress didn’t hold back with her accessories either, and gave us the ultimate ’90s throwback moment: a backward baseball cap, mini circular sunglasses, and pigtails. She slung a leather bag over her shoulder, too. 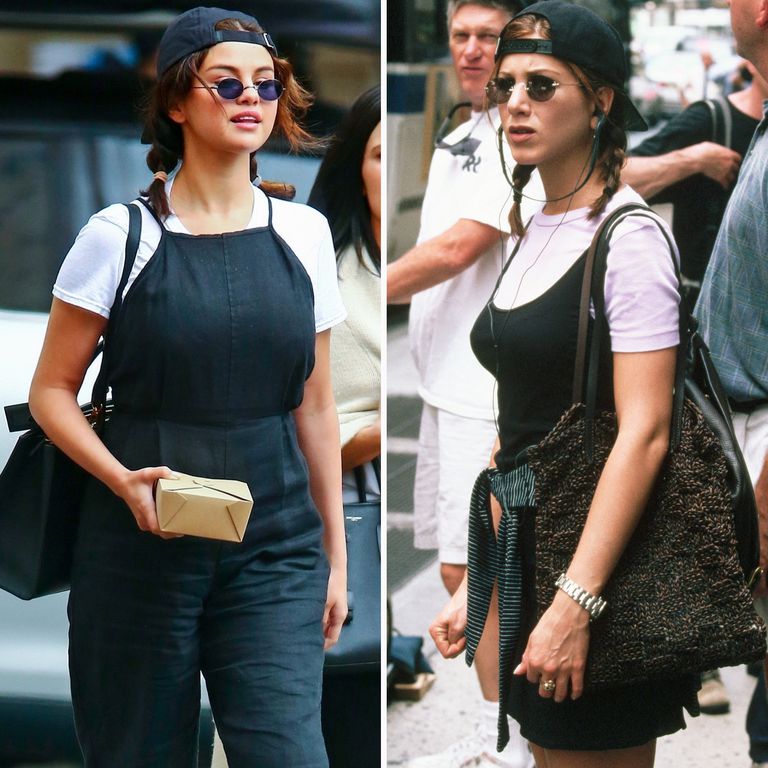 Selena Gomez in 2019 and Jennifer Aniston in 1996.
BACKGRID/GETTY IMAGES

Aniston first wore the now-iconic look on the set of her 1997 romantic comedy Picture Perfect. The actress also rocked a white crewneck T-shirt, but unlike Gomez, she wore it with a black minidress instead of a jumpsuit. For shoes, she opted for chunky black sandals rather than white kicks.

The Friends actress wore braided pigtails, turned her black baseball cap backwards, and had circular sunglasses, although hers were a darker tint than Gomez’s. Aniston had her headphones in (perhaps listening to music on her Walkman) and tied her jacket around her waist. She also carried an oversized shoulder bag. 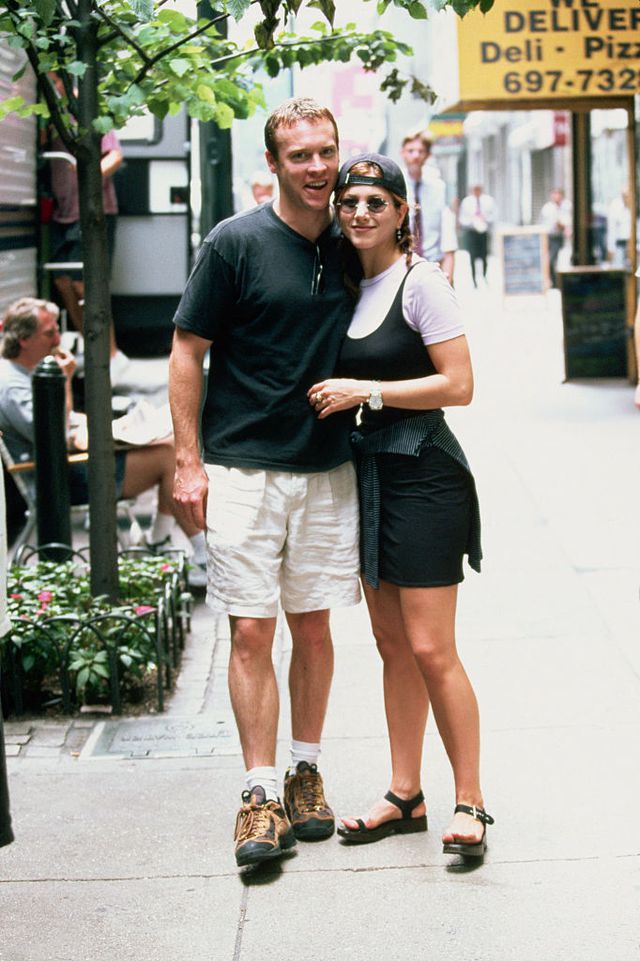 Gomez has previously stated that she looks up to Aniston for career inspiration, so it’s no surprise that she’s inspired by the actress’s style as well.

“I always say that I worship Rachel McAdams as a movie actress but for comedy – the whole reason I started my show and mannerisms, they were after Jennifer Aniston,” Gomez told JustJaredJR in 2009. “It was so funny, they were playing clip reels of the work she’s done and I quoted the whole thing. Every single thing she’d say, I would say it. People were sitting there laughing at me and they’re like, ‘Wow, you’re obsessed,'” she added.

I have not only been following her career as a fan since I was 8 and now get to watch her completely transform in her new movie CAKE, I have gotten to have real conversations with such a real heart, made my entire year. #cake #goseeit

In 2014, Gomez continued to show fan love to Aniston, who at the time was promoting the film Cake. In a stunning black and white photograph uploaded to her Instagram, Gomez shared that she has “gotten to have real conversations with such a real heart, made my entire year.”

The only question left on our mind is: How long until Gomez fully commits and gets “the Rachel” haircut?

Fitness & Wellbeing
These routines will remedy the aches and pains gained by working from home.

Culture News
Grab the tissues before you run the footage back.
Type keyword(s) and press Enter
WordPress Lightbox Plugin