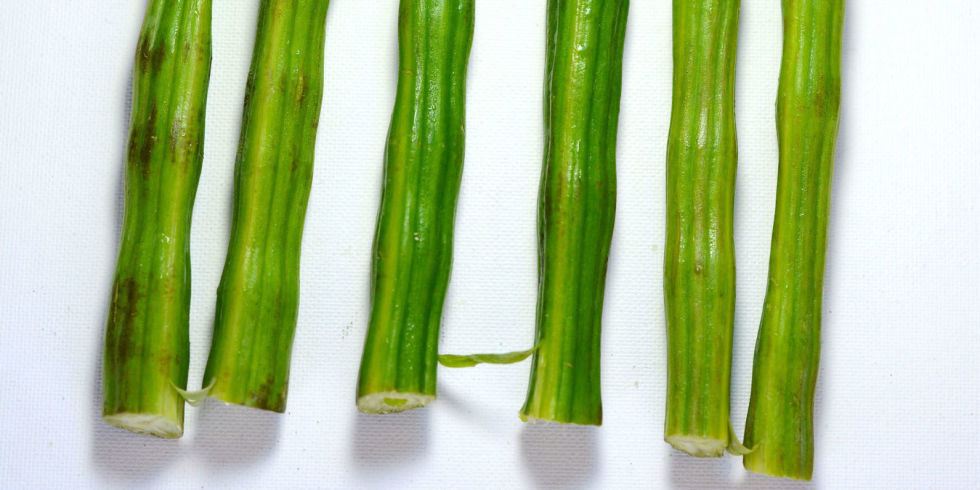 Moringa, or Drumstick is a staple of some delicious Asian dishes, though it can be a little fibrous

Step aside, kale, and make way for the latest superfood star: Moringa.

Also known as the drumstick tree because of the shape of its seed pods, the moringa tree is native to India but can be found in many other tropical and subtropical areas, as well. Almost every part of the tree can be used for something, but the leaves and drumstick pods are what’s most commonly used in food and traditional medicine. It’s no wonder why: According to the NGO Trees for Life, gram for gram, moringa leaves contain:

It gets better! Moringa leaves can be eaten raw, cooked like kale or dried and ground into a powder; the drumstick pods, which are found in all kinds of delicious Asian dishes, can also be eaten raw, cooked, or even squeezed to produce moringa seed oil.

We’re starting to think the tree is a bit of an overachiever, actually: Moringa has been used to fight malnutrition in dry areas where nutritious crops don’t often grow. And the Food and Agriculture Organization of the United Nations (FAO) even named moringa as its Traditional Crop of the Month in September 2014 because it’s so useful. Impressive, right?

If anything, we’re wondering why moringa is just now entering the western world’s superfood spotlight. Prepare yourselves for an onslaught of moringa teas, supplements, and powders. An important note: If you do decide to try moringa (or any other product you’re unfamiliar with, really), be sure you know exactly what’s in it before you put it in your body. Don’t take any chances.