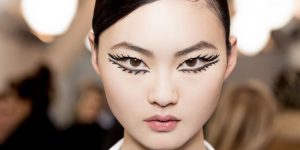 Seconds after stepping behind the backstage curtain of Monday’s Dior Haute Couture Spring 2018 show, it became clear that the make-up look was going to be one worth waiting for.

Amid the hustle and bustle of the packed marquee parked in the grounds of the Paris’s Musée Rodin was Dior’s creative and image director Peter Philips, calm as ever in the eye of the storm. 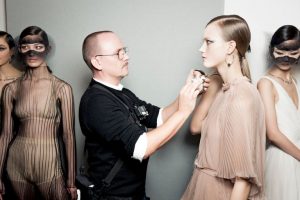 “Today’s focus is on the eyes, with loose-handed lashes applied using our new liner,” said Philips. “When applying, I looked at the girl and drew two stripes quite horizontally and then added the illusion of fake lashes.”

The look was designed with the masks many of the models wore, designed by Stephen Jones, in mind. Philips also looked to the gowns for inspiration.

“The prints in Maria’s [Grazia Chiuri] dresses are quite painterly, so I used the same kind of brush strokes – not too clean, or it would look like Ice Capades make-up,” said Philips.

The new Diorshow On Stage liners were used, which will launch this April in 14 shades, with matte and glossy finishes. 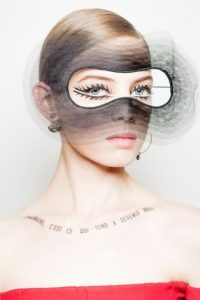 Skin was clean and luminous, thanks to the Diorskin Forever & Ever Wear Primerfollowed by Diorskin Forever Undercover Foundation. To ensure not to draw attention away from the eyes, Philips prepped and moisturised lips with Dior Lip Maximizer and Lip Glow in Pink and Matte Pink.

As with the show itself, Philips was inspired by the Surrealist movement and movies such as The Red Shoes starring Moira Shearer.

“Surrealism is a really important artistic movement for me,” said Philips. “Salvador Dali and Man Ray, as well as the German photographer Grete Stern are all references for me, and I particularly appreciate their provocative vision.”

Philips further added intrigue by applying black temporary tattoos to the hands, ears and collarbones of selected models. The tattoos, which included words like ‘Clef’, ‘Liberté’, ‘L’Art’, and ‘Miroir’ and quotations chosen by Maria Grazia Chiuri, were all a nod to the Surrealist movement as well.

In all, the look fit with the gowns as beautifully as the song used for the finale of the show – Bittersweet Symphony.