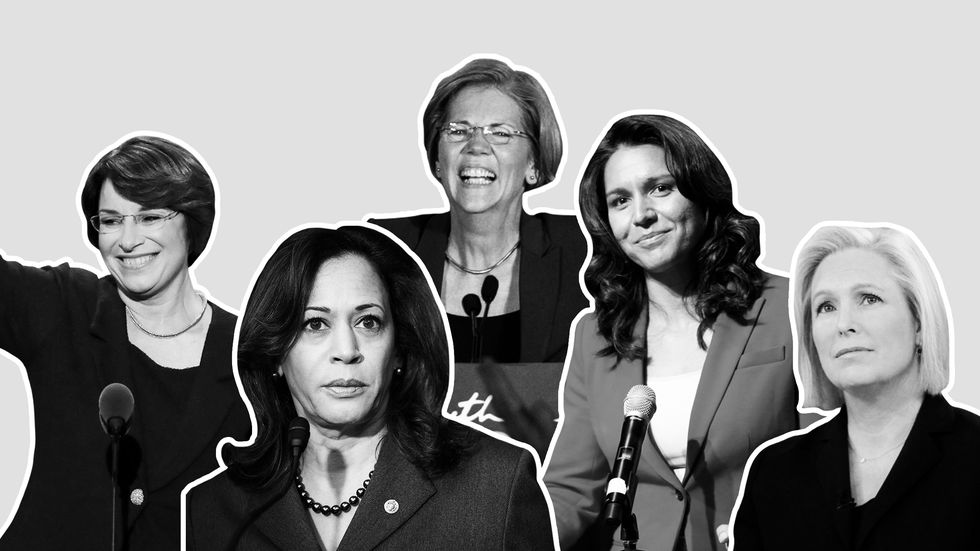 Culture /
Culture News
2020 has seen a record-breaking number of talented women run for president – but can they win?
By Murray Clark

On 28 July 2016, Hillary Clinton accepted the Democratic nomination for president with “humility, determination and boundless confidence” – and the widely shared belief that she’d sail to the White House. We know what happened next. The highest and hardest glass ceiling Clinton so often spoke of remained intact. 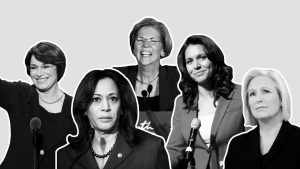 Intact, but under strain. While Clinton may have lost – and many critics apportion that loss to her own personal shortcomings as a candidate – she illustrated the unique difficulties a woman would face: the sexually loaded, gendered denigrations made by hardline Trump supporters, for instance, or a recent report in The Atlantic that showed how voters tend to respond negatively to a female candidate, even if she’s identical in policy and presentation to her male counterpart.

Not that this should be a deterrence. Clinton amassed a majority of 65,853,514 votes – a total bested only by her former rival Barack Obama. Even if the former Secretary of State did lose in crucial swing states, that’s a lot of people ready for a woman in charge. What’s more, the Democrats have enjoyed much success in electing women at every level of governance since 2016, and there’s reason to believe that this momentum could propel a woman into the White House itself.

It won’t be easy. While Donald Trump is one of the most unpopular Presidents of all time, unseating an incumbent is historically difficult; only three have lost reelection since World War II. Worse, the political landscape is as divisive and as polarised as ever. 2016 may well have been a playfight compared to the potential bloodsport of 2020. Lest we forget sexism, let’s remind ourselves of Wikileaks and Vladimir Putin.

Despite Clinton’s bruising campaign, it’s likely that the Democrats, the party supported by 63 per cent of American women according to a CNN poll late last year, will nominate another female candidate to take on Trump; one with the political skill of Clinton, but perhaps without the baggage. And even if none of these women make it through the primaries (a notoriously drawn-out, complex process to decide upon the nominee), records have already been broken: never before has more than one woman run for president of either major political party.

The calibre is high, too, and the hope for a female victor isn’t unfounded when the high-profile pool is taken into account. That glass ceiling has never looked weaker. 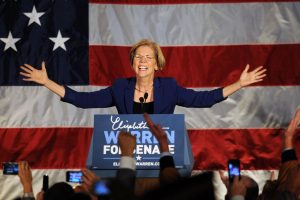 As the first major candidate to announce her campaign on New Year’s Day, Elizabeth Warren has enjoyed a slow rise. The daughter of an Oklahoman janitor, this teacher-turned-Harvard-professor-turned-US-senator is an expert on bankruptcy law, and has been publicly critical of a rigged system that she argues favours the top one per cent. Her potential has long been earmarked; Warren was urged to run in 2016 as a sellable, fiery midpoint between Clinton’s relative centrism and the progressive wing of Bernie Sanders.

“Trump, true to form, has taken to calling the senator ‘Pocahontas’”

Therein lies the ‘problem’, though. As a rousing populist, Warren can prove divisive: gendered accusations of shrillness and likeability so commonly levelled at Clinton have found an unhappy home on Warren’s shoulders. Then, long-standing claims of Warren’s Native American ancestry came under fire, and her public rollout of a DNA test to consolidate this was highly criticised by minority groups as misleading and inaccurate. Trump, true to form, has taken to calling the senator ‘Pocahontas’.

These are relative minors, though. Her anti-Wall Street stance is very much en vogue with voters, and proposed taxes on the wealthiest have been met with open arms by the left. Warren pulls no punches, either – in debate, in policy, with the press – making her less a figure of union, and one of protest. But maybe that’s the point. The gloves remain firmly off in the Trumpian era, and Warren may well be the brawler Democrats need. 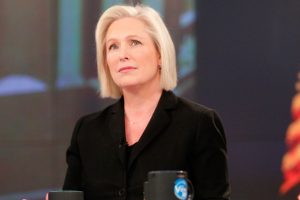 Kirsten Gillibrand’s political ascent is a well-trodden path. First a lawyer, then a congresswoman, the upstate New Yorker was appointed to fill the vacant Senate seat left by Hillary Clinton when the former First Lady became Secretary of State. After a decade on the job, Gillibrand announced that she was to seek the higher office of president.

Then came the job of selling herself. Once considered a conservative Democrat (Gillibrand was pro-guns and took a fairly hardline view on immigration), she has liberalised in recent years: the 52-year-old campaigned for gay people to openly serve in the military, and has backed the #MeToo movement as an outspoken advocate against sexual assault. She was also the first to call for the resignation of her colleague Senator Al Franken in light of sexual-harassment claims.

“As someone with an ideological makeover, she’s faced murmurs of inauthenticity”

This plight is noble, and no doubt genuine. But as someone with an ideological makeover, she’s faced murmurs of inauthenticity and flip-flopping: the act of changing one’s positions to suit the wider electorate, and this proved damaging to Clinton’s campaign too. Yet Gillibrand remains relatively unknown on a wider level, and quite popular in her home state. That means she can carve out her own positions, and introduce herself to America on her terms: a luxury Hillary Clinton was never afforded. 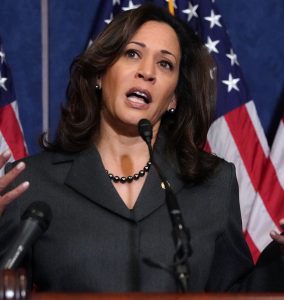 The buzz around Kamala Harris, an attorney general turned senator for California, is palpable. And with good reason. She is a new face of the Democrats and her rousing performances during the Kavanaugh hearings and other nominations launched the former prosecutor onto a national stage: she’s framed herself as a no-nonsense woman of the law, and is relatively young for a senior US politician.

What’s more, Harris’ credentials on paper seem to sync up. She openly supports Black Lives Matter. She’s scored several unlikely victories in her home state. And, just this weekend, a campaign rally in Oakland allegedly drew a bigger crowd than Obama’s presidential announcement in 2007 – all of this, despite criticism that Harris failed to publicly condemn the issue of mass African-American incarceration during her time as attorney general. These all point to what could be a stellar showing in a crowded Democratic primary if she can successfully court early voters (a demographic largely made up of African Americans and ethnic minorities in the southern states).

“The buzz around Kamala Harris is palpable”

Still, Harris is realistic about the challenges that she, as a biracial woman of Jamaican and Indian descent, faces. In her most recent book, The Truths We Told, the 54-year-old notes how “racism, sexism, homophobia, transphobia and antisemitism are real in [America] and we need to confront those forces”. Harris seems to be relying on her personality as opposed to policy in order to combat this. But it’s a fight worth having. And with Harris polling strong among the frontrunners, there’s a base ready and waiting to take up arms alongside her. 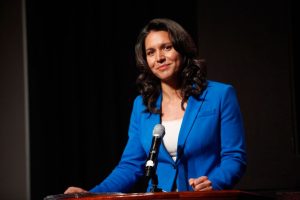 Once seen as a rising star in Democratic politics, Tulsi Gabbard is one of the more surprising, and most scrutinised, women to run for president.

Representing Hawaii’s second district since 2013, the former Iraq veteran was the first Hindu and Samoan-American ever elected to congress. During 2016’s contentious primaries, she was one of the few Democratic lawmakers to openly endorse Bernie Sanders, backing his calls for universal healthcare, tuition-free college and an end to US intervention abroad.

So far, so progressive. But Gabbard’s record up close hasn’t always looked so liberal. In the early 2000s, she supported her father’s work with the Alliance For Traditional Marriage: an organisation that promotes conversion therapy, and one that actively opposed pro-LGBT lawmakers. Gabbard soon apologised for this upon announcing her campaign, but other questions arose. The congresswoman met with Syria’s President Bashar al-Assad in early 2017, a man being investigated for war crimes that include chemical attacks upon children. Pair that with purported links to a Hindu nationalist group named Vishwa Hindu Parishad, and Gabbard has come under plenty of fire since throwing her hat into the ring.

Furthermore, Gabbard’s role in the lower chamber is not one that lends itself well to presidential politics. Congressmen and women are among hundreds of other lawmakers, making it hard to carve out a national profile, and even harder to stand toe-to-toe against personalities in the senate. All of that makes Gabbard the long-shot candidate, and her own ideological trajectory hasn’t helped. 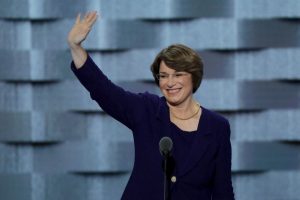 Minnesota’s senior senator Amy Klobuchar is undecided on running. But there’s every reason why she could – and should.

First elected in 2006, the former lawyer is overwhelmingly popular in her home state. So much so that Klobuchar scored a third term by 24 points in a state that Clinton won by less than two in 2016. Klobuchar’s roots in the American Midwest speak loudly to the swathes of blue-collar workers the Democrats have lost: Wisconsin, Michigan, Ohio and Pennsylvania all fell into Trump’s column by a razor-thin margin, and it may take one of their own to win them back. And, unlike her colleagues in the senate, Klobuchar is known for a reserved, methodical approach: grandstanding just isn’t her style.

Getting the job done, however, is. She reaches across the aisle to work with Republicans on bipartisan causes, like child safety, and could be seen as a moderate force when both parties continually push towards the fringes. Of course, this may not bring about sweeping structural change. But it does focus on the small things: something her opponents have levelled as a criticism.

But that’s the general art of politics. After the TV-grabbing fireworks of an election comes policy: the part which is far less sexy, but much more important when delivering campaign promises. Klobuchar eschews the former for the latter, and this go-getting attitude is something that avoids the current President – and it could see him replaced entirely.

Beauty Buzz
Using eye cream on the lips is an industry trick, and this multi-use product addresses the needs of both areas.

Beauty Buzz
The beauty brand, which began as a blog, launched in 2014.

Beauty Buzz
Collaborating with Bart Hess, this is how their formulations work on the skin.
Type keyword(s) and press Enter
WordPress Lightbox Plugin