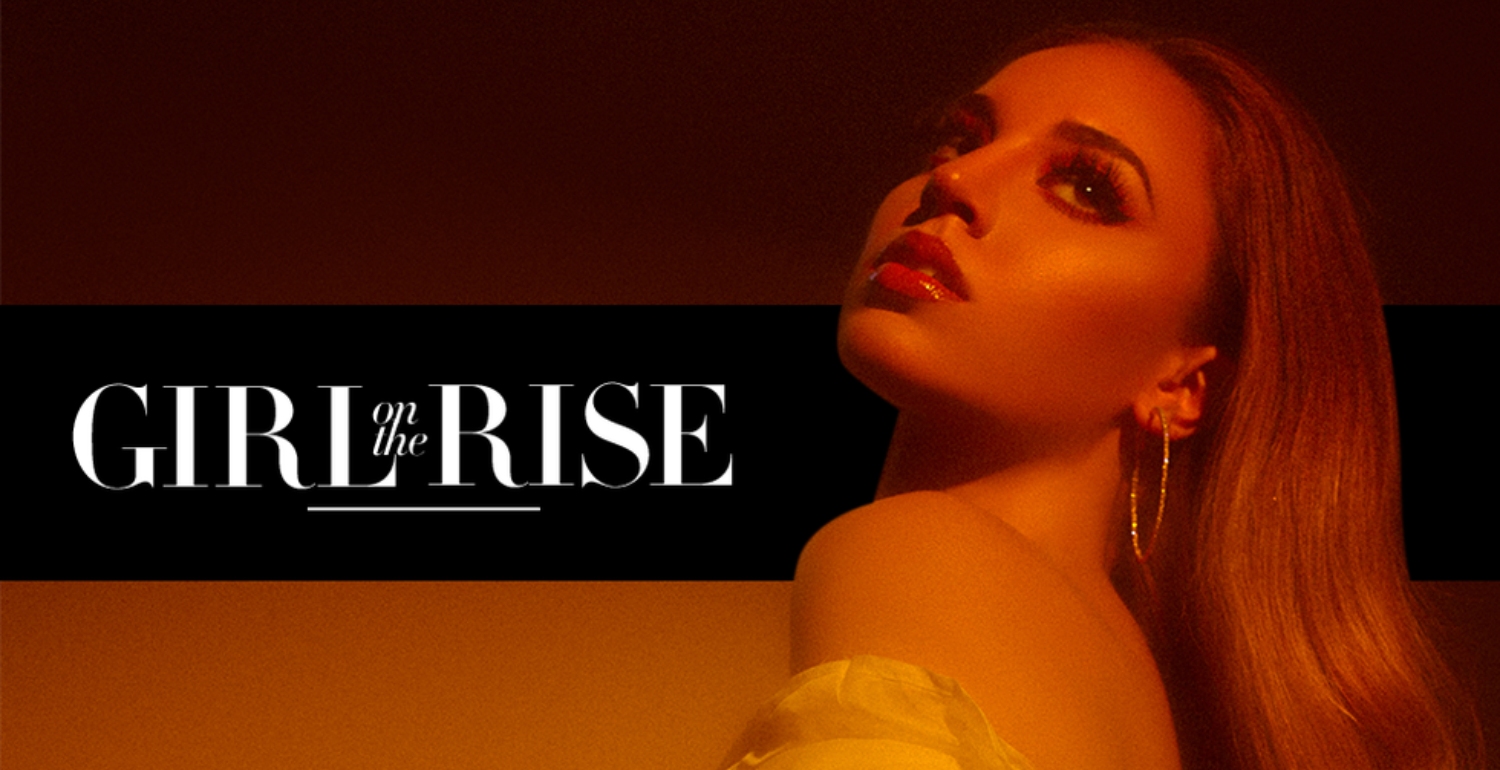 Culture /
Culture News
The songstress talks working with Khalid, making new music, and her dislike of Instagram.
by Erica Gonzales 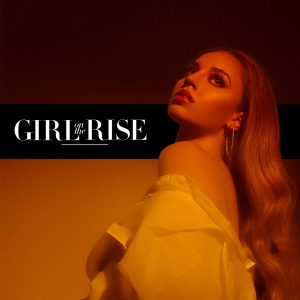 Alina Baraz’s debut EP, 2015’s Urban Flora, was a product of many unique cases. First, she never met her collaborator and producer, Galimatias, face to face; she and the Danish beat maker volleyed tracks over Facebook. Second, she didn’t have feedback. She wrote her lyrics solo, in her room in LA, with no outside opinions. And third, she didn’t even know she could sing, let alone write songs, when she made it.

“I grew up from a very young age knowing that music would be my career, but I grew up thinking I couldn’t sing, so it was a really weird mentality,” Baraz explains to BAZAAR.com. And getting rejected from a sixth-grade play didn’t help. A teacher “said I sucked,” she recalled from across the table, crossing one Gucci logo-printed thigh-high boot over another.

Soft-voiced Baraz, who speaks as gently as she sings, grew up listening to vocal powerhouses like Whitney Houston and Alicia Keys. “I was like, ‘Oh, in order to be good, you have to be able to belt and project,’” she said. 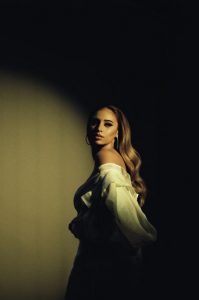 But listening to a tone-singer like Corinne Bailey Rae, with a voice as silky as hers, made Baraz change her mind. “Then I tried singing soft, and I’m like, ‘This is nice,’” she said. “I just found you can be respected and appreciated with a softer voice, and you can project in different ways.”

Perhaps Baraz wasn’t cut out for middle-school theater, but her soothing vocals, especially when paired with House- or R&B-inspired production, found the spotlight on SoundCloud. And a collaboration with budding pop star Khalid in January 2017—a hit called “Electric”—only helped her get more attention.

In April, Baraz released her first full-length project, The Color of You. The nine-track release marked a sonic transition for the singer, who shed her electronic-forward sound for a stronger R&B influence. Unlike her process for Urban Flora, she recorded in a studio, with multiple producers (whom she actually met in person), and wrote her lyrics like daily journal entries rather than reflections on past events.

Baraz’s newest single, “Feels Right,” which released September 21, is the latest proof of her transition to stardom. It’s paired with a glossy music video, which she co-directed with her creative partner Amber Park, where she sports flashy outfits, including a sultry chrome ensemble consisting of a custom puffer jacket, chain underwear, and tall boots—which she models atop an ATV.

Ahead, Baraz tells BAZAAR.com about her latest project and how she’s evolving as an artist.

“Feels Right” is a demo she got attached to.

She wrote the song three weeks after The Color of You.

“That was the first song I wrote after my latest project. I had been built up tension ’cause I stopped working for like, three weeks. It had been the longest I’ve ever not worked, so I had guilt, and I wanted to get back in. It was just that super inspiring first song, first day back at work.” 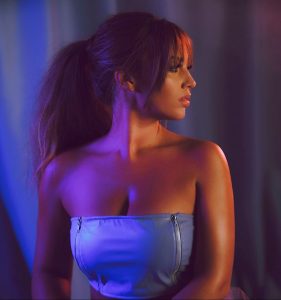 Baraz felt pressured writing music after Urban Flora. It took her three years to take a step back, live life, and get writing again for what ultimately became The Color of You.

“For two, three years after Urban Flora, every song I made, I was just like, ‘I hate this.’ I was just coming from a place of pressure, and I felt no need to express myself at that time. I just needed time.

“With Urban Flora, I had never made a song before, so I couldn’t say this is good or bad. It’s so easy to make something for the first time. But then, when you start having inputs and opinions and criticism, it got to my head for a second. And then I was like, ‘Chill out. You’re fine. You’re gonna be fine.’ I went and lived life to the point where I needed to write about it.”

She wrote “Yours,” her favorite song on the project, a week before she had to submit songs for The Color of You.

“I work really well with a bit of pressure. I knew I had to turn it in in a week, and I was so sick that last week. I was just so fueled by that passion and it worked out. ‘Yours’ was just super personal. I end my live shows with that song, too, because it feels the most vulnerable. It’s just me and the piano, and there’s nothing to hide behind. I like those moments.”

The differences between making her two records are like “night and day,” Baraz says.

“I don’t even compare them just because for Urban Flora, I had written about a relationship that happened three years prior. The relationship was terrible. Like sh*t. Worst thing I’ve ever been through. But I made a conscious decision. I was like, ‘I’m gonna write only about the things that made me fall in love.’ So I was super reflective and a little biased. I sat in my bedroom. I didn’t hear anyone’s input. I was super in my head.

“With Color of You, I was writing with other writers and producers and other people in the room, and they could tell me how they feel about it. And however I felt that day, that’s how the song came out. I had so much time to think on words with Urban Flora. With Color of You, I would just go and what I said was the lyric. It was like a subconscious stream of thoughts.”

Baraz’s biggest hit is “Electric,” her collab with Khalid. But she didn’t meet him until they were performing the song together for the first time.

“We were both running late, which is very representative of me, to my show at Bowery Ballroom in New York. We were supposed to meet before the show, but we ended up meeting onstage while performing ‘Electric.’ It was so cool. It was just like, ‘I know you so well, but I don’t.’

“When I made ‘Electric,’ I didn’t know him, though. I just made two verses, and I thought the song was done, but then it somehow got to him and I didn’t know. And it sent back, and I was like, ‘This is amazing. This is what it needed.’ With our Color of You collab, “Floating,” we got to go into the studio and sing in real time, at the same time.”

She took up a more hip-hop-inspired feel on her lead single “I Don’t Even Know Why Though.”

“It was definitely a conscious choice. I had been feeling such a type of way about someone that day, that I just wanted to go off on them, and that was beat was very representative of that.

“For ‘Feels Right,’ I heard that beat, and it just fueled my entire emotion. It just felt like such a moment. I had been wanting to make a song like that, and I was excited for the people to hear that kind of change, because everyone expected another Urban Flora. What good is that if I’m not pushing myself?”

She wasn’t nervous about how her fans would feel about her new sound.

“I wasn’t concerned. I’ve never been concerned if people are gonna like it or not, ’cause there’s always going to be two different sides. I was just anxious. I wanted to get it out. I just wanted people to have it.”

When Baraz first started releasing music, she was very cautious about her public image. It was nearly impossible to find photos of her online. That’s different now, in the Instagram age.

“I think I’ve just accepted what comes with the territory. My fans feel like family, and I feel like I owe it to them, at this point, to share all of me with them because they share all of themselves with me. It’s just this even exchange, so it felt right.

“I wasn’t trying to play the mysterious card. I think it naturally comes off that way, but I just wanted to be really well known by ear before they knew what I looked like. Just so the music could be appreciated. I think a lot is thrown at us these days, and we naturally miss out on a lot. It just felt right.”

off day, what u tryna do

But she loves downtime away from her phone, especially if it involves the spa or an Aztec clay mask. (Baraz suggests mixing Calcium Bentonite Clay with apple-cider vinegar, which has been her go-to self-care regimen on tour.)

“I love to shut my phone off. Everyone hates that around me. I just will leave it somewhere. I’m not the biggest fan of Instagram. But I do it for my fans. That’s the only reason. I would not be on there if not, ’cause I’m not here for that. I want to do something with music. I want to heal. But I love to unplug. That’s why I love getting facials because I physically cannot open my eyes.”

Celebrity Watch
A crew member was rushed to hospital after the attack.