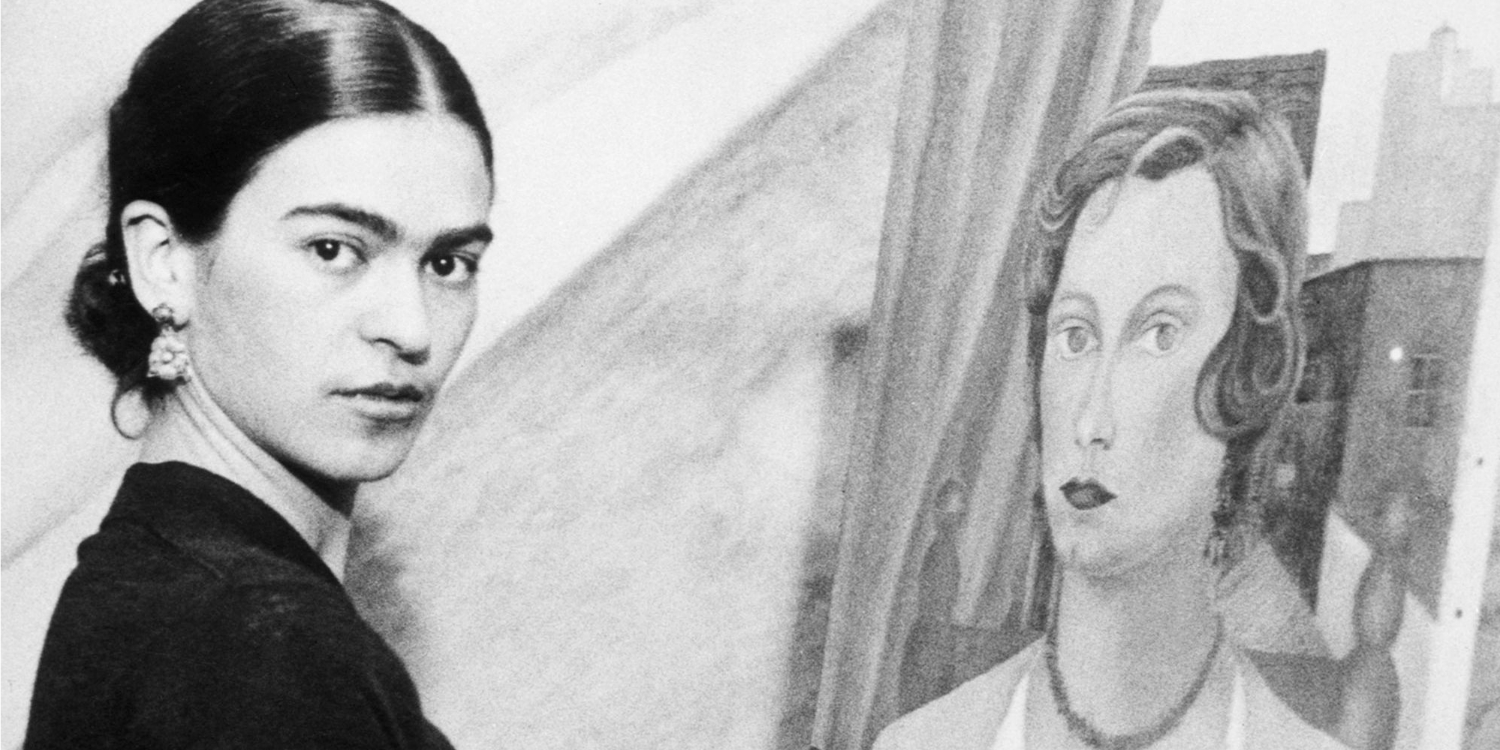 Culture /
Art & About
As a new exhibition opens at the V&A, Jessie Burton remembers the icon who turned her suffering into compelling work
by Jessie Burton

Frida Kahlo should have died when she was 18. Everyone thought she would. The injuries she sustained after a bus collision in Mexico City were so horrific, that the billiard table where she laid waiting for an ambulance could have been her funeral pyre. Her spine was shattered in three places, her collarbone and ribs broken, her pelvis and shoulder dislocated, her right leg had eleven fractures, and most potently, a steel handrail skewered her abdomen, exiting her vagina. She was haemorrhaging, her body covered in blood and powdered gold, a pot of which a fellow passenger had been carrying. It exploded over her in the crash, a prophetic baptism for the glowing pain that was hers from that day forward. The actual accident, she later said, unfolded in silence. But when they pulled out the handrail, she screamed louder than the ambulance.

The position of the handrail, the blood, the gold, the billiards, the drowning out of a siren, is all so Kahlo – the female body in torture, the eye for contrasts, the black humour, the indomitability – that you’re tempted to raise an ironic tequila to the queen of self-creation, nourishing the image of this Mexican woman who refused to be a victim. And yet, the image is a true story. The surgeons had to put her back together like a collage, another pre-figuring truth for the artist who would cut her face or torso out of pictures, the woman who used the geometry of clothes and dazzle of jewellery to trick the eye from her deformities. Ninety-three years ago in a hospital medical theatre, Frida Kahlo was a puzzle. For me today, she remains equally difficult to piece together. 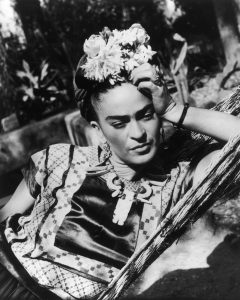 Because here’s another story: in the year of a revolution, a girl was born to a Tehuana mother and a German papa, in the country of the Aztecs where the eagle eats the snake. A teasing, imaginative child, she grew under the purple jacarandas in Coyoacán, watching her father – a distinguished professional photographer – pose for his own camera, learning how the world can be made in a single gaze. Polio shrunk her leg, so in sketches of herself she covered the limb with butterflies. She wanted to be a doctor, but the age of 18 brought a curse worse than polio, in the shape of a crashing bus. She survived, broken but alive, and went on to marry a man whose fame and physicality were the size of a mountain. She called Diego Rivera her other accident. She also called him ‘my little boy’.

Motherhood evaded Kahlo, despite the yearning. She suffered dangerous miscarriages and medical abortions. She had begun to paint herself in convalescence – looking up into a mirror her mother had fixed on the roof of her bed – and work became her salvation. Her self-portraits were syntheses of her personal life, her communist politics, her Catholic upbringing and loyalty toward Mexico’s indigenous cultures. Throughout her life, in her flowing skirts and dark moustache, she took both sexes to her bed. Unfettered in the bedroom, she was disciplined in the studio, and always kept her brushes scrupulously clean. 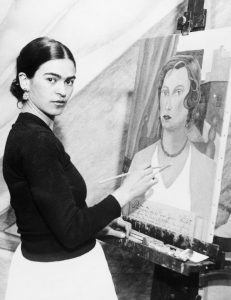 Her paintings were small in size but explosive in their auto-biographical subject matter. Sometimes, she used her nail polish in place of paint: the real world blurred onto the imagined, her life as art. Outside of the frame, flowers wreathed her body, hiding the medical corsets and wrecked fertility she detailed on the canvas. Her clothes were shields of colour. She lengthened the heel on her right shoe because quite literally, she knew how it felt to live off-balance.

Again and again she fought off la pelona – what she called the bald woman, known also as Death. She endured 30 major surgeries in her life, and eventually la pelona won. Kahlo, not yet 50, was laid out, beautiful in her Blue House, her artist’s fingers ringed in jade and coral, cooling in the dusk.

I could go on. I will go on, because Frida Kahlo is a writer’s dream, and for years she has been mine. Yet because she is so shapeshifting and self-aware, and because time can harden the veneer on an icon’s image, it’s hard to quantify what precisely about Kahlo makes her such an inspiration to so many. You can tell her tale, but the woman shimmers away – at times too fragmented, too mass-consumed to feel real. The ubiquity and fixity of her image has caused a diffusion of her true personhood, rather than assuring any distillation of it. The face she turned to the world acts like a stopper on the woman behind it. But perhaps with Kahlo, that was the whole point? We can still trust that steady gaze, because she considered it to be just as true.

Kahlo isn’t an illusion; she’s simply self-constructed. If your body were broken apart like hers was, on the cusp of womanhood – what would you do? If you were married to the most famous man in Mexico – how would you cope? I believe, that because she was forced at such a young age to understand how death was her close neighbour, to know chronic pain and loss, to be so prodded, patronised, denied and deified, she had no option. She had to decide who she was, or others would do it for her. 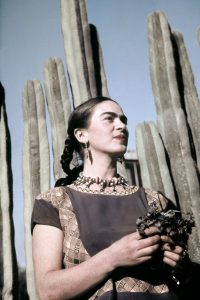 The kaleidoscopic biography is delicious, but Kahlo wasn’t born in the year of the revolution – Mexico’s, of course, which began in 1910. She switched the date, a child of change who became a woman destined for endless upheavals. Her birth was three years earlier, but time means nothing when you’re in the fierce process of making yourself up. A literal Orlando, like Woolf’s creation, Kahlo spent her life flitting between selves, immobile and daring, vulnerable and impervious, Jewish, Oaxacan, German, bisexual, wifely, a self-supporter, a mistress dancing on mirrors, understanding that to be fully whole one must be many things. The age-hopping doesn’t matter; it’s the fact she wanted to do it in the first place that’s interesting. It’s the plurality of Kahlo that dazzles – what we’ve done to her in our adoration – but more importantly, what she did to herself. Whether she meant to or not, Kahlo says: look at me. You can be anything you want to be. 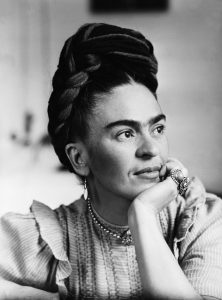 Read the full piece in the July issue of Harper’s Bazaar – out now. ‘Frida Kahlo: Making Her Self Up’ is at the V&A from 16 June to 4 November.

Fashion News
From Louis Vuitton to Hermès, these are the timepieces you’ll actually want to wear.

Celebrity Watch
The actress whisked a group of friends off to Spain to celebrate her marriage to Joe Jonas.

Celebrity Watch
But how long until she gets “the Rachel” haircut?
Type keyword(s) and press Enter
WordPress Lightbox Plugin