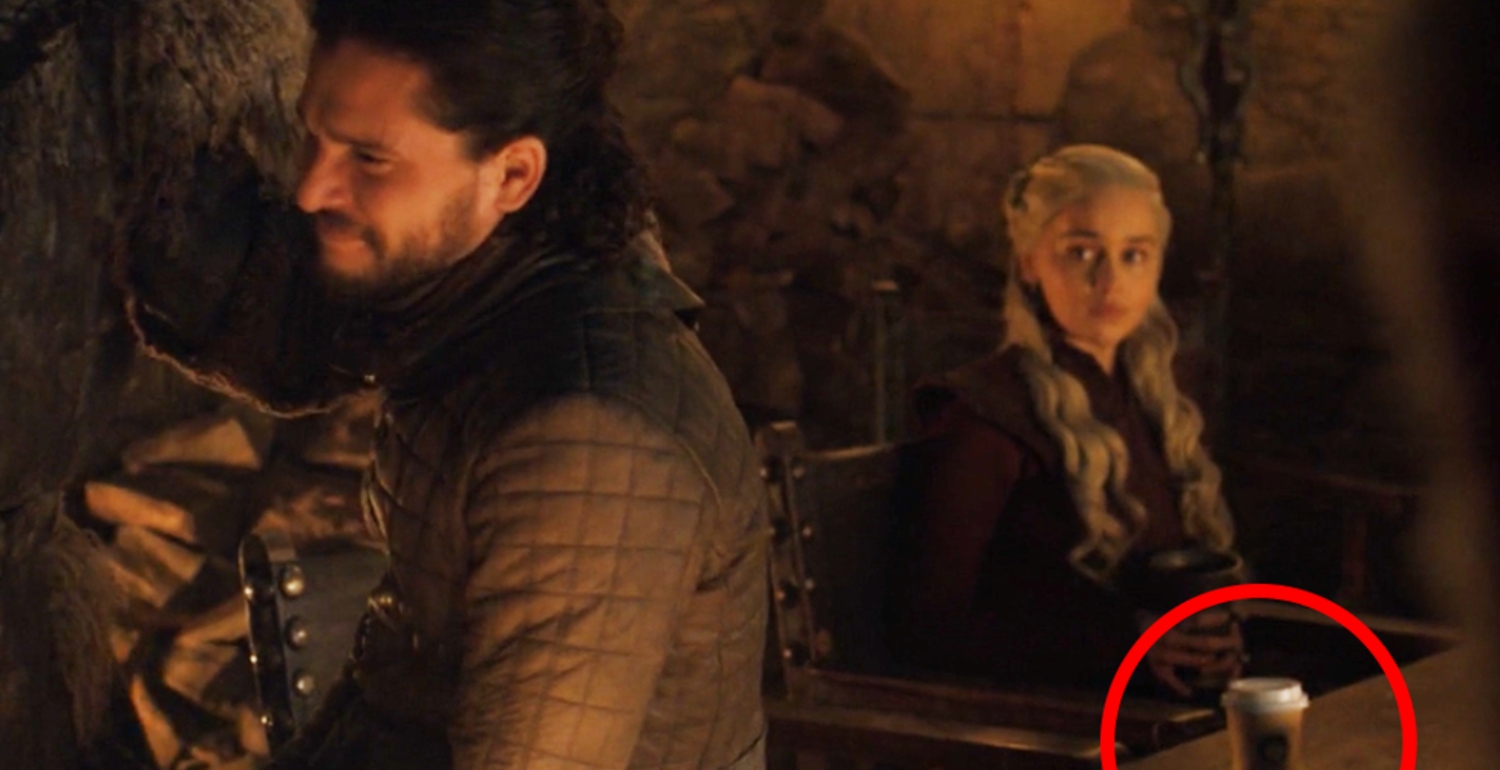 Culture /
Culture News
Did you spot it when you watched?
By Erica Gonzales 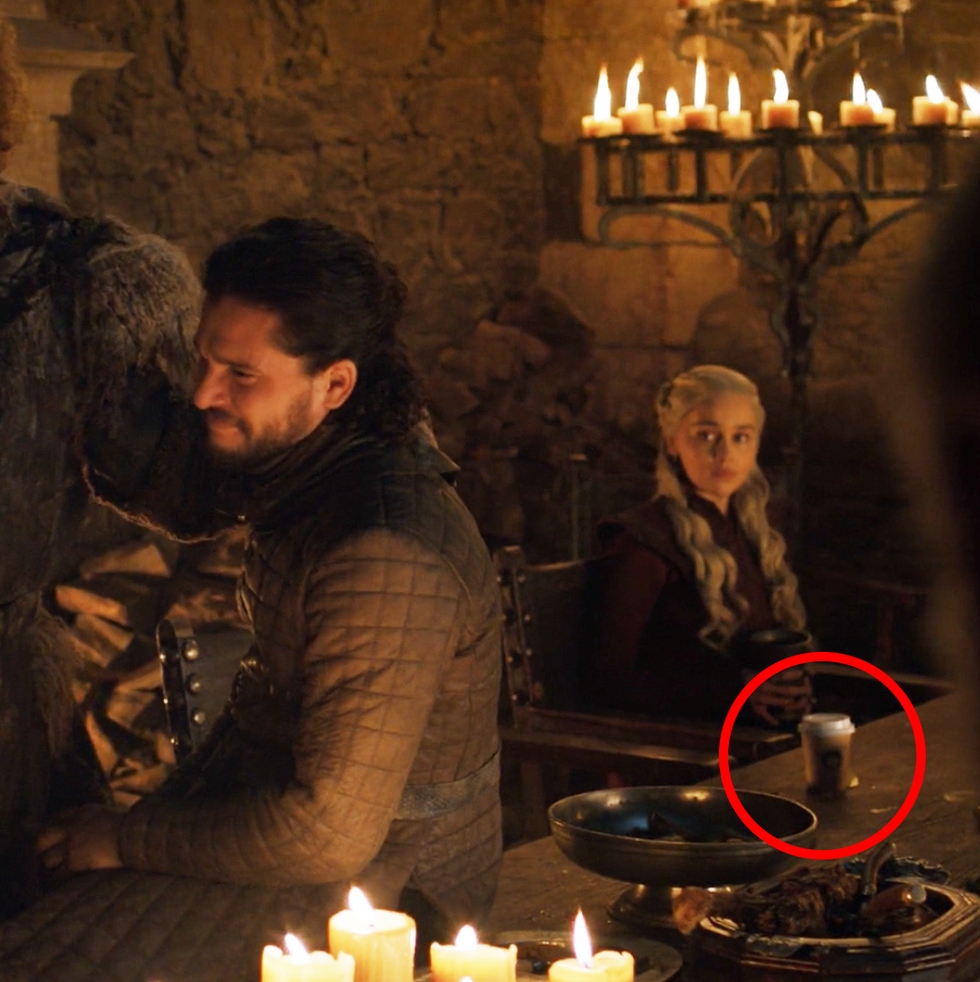 WARNING: This story may contain spoilers for Game of Thrones Season 8, Episode 4.

From all of the bizarre things we’ve seen on Game of Thrones—from an undead dragon to the warlocks of Qarth—a disposable coffee cup probably takes the cake.

In last night’s episode, fans spotted the cup on the table of the great hall of Winterfell as the surviving army celebrated their victory against the battle against the undead. While the cast ate from wooden bowls and swigged from goblets (except for Tormund, who chugged his drink from a horn), the coffee cup was definitely out of place.

Some viewers on Twitter suggested the drinking vessel was from Starbucks, given the faint resemblance of the company’s logo, but that remains unclear. What we do know is that people dragged the show for the misplaced prop. Considering all of the money poured into this series, someone should’ve noticed the coffee, or at least edited it out, right?

For those of you who didn’t think the Starbucks cup gaffe was real, I went back to watch it and—#GameOfThrones pic.twitter.com/xNz2iBHySH

GAME OF THRONES IS ONE OF THE HIGHEST BUDGETED TV SHOWS AND THEY FORGOT TO REMOVE THE FREAKING COFFEE CUP pic.twitter.com/K1URaj6aUF

I cannot get over how the makers of #GameOfThrones put fans on blast for not having expensive enough TVs to fully appreciate their visually perfect show then this week there’s actually enough light to see the screen and their sloppy asses fully left a 2019 coffee cup in the shot. pic.twitter.com/gzUjhkn9xY

This is hilarious. All that time & money spent on #GameofThrones and they miss a coffee cup! 😂😂 pic.twitter.com/4An5rm4ZeR

my favorite show in the entire world forgot a STARBUCKS COFFEE CUP ON THE TABLE WHILE FILMING pic.twitter.com/60z3pOCfg9

Not a spoiler. But how does a PAPER COFFEE CUP make it past editing in #GameOfThrones? As a producer and editor myself it’s unfathomable considering these get color, etc. @ 17:40 (spotted by others) pic.twitter.com/wn6Tih2DGk

Some also took a jab at the writing.

OMG do you guys see the Starbucks coffee cup in the table? Wtf ? Lol and you guys expect good writing when they are THIS careless? #GameofThrones #GOT #DemThrones https://t.co/Sb6VdWknCW

If they can’t spot bad writing how are they going to spot a coffee cup? #Starbucks #GameOfThrones pic.twitter.com/uGAMbY65pP

Others joked that the rogue mug belonged to Daenerys (although she’s seen clutching her own cup at her seat).

Yes, that was a Starbucks coffee cup in front of the Mother of Dragons on tonight's #GameofThrones https://t.co/cFrT0w5bW8 pic.twitter.com/wLGRX8mIip

when you want to be ruler of the seven kingdoms but all anyone wants to talk about is the Starbucks cup you left on the table pic.twitter.com/MOOwXm08nw

A close-up of the coffee cup in #GameofThrones pic.twitter.com/6h74N3T2cB

The irony of the Unburnt drinking Starbucks

And some simply went for the memes.

the editors going back to digitally remove the starbucks coffee cup from the latest episode for the dvd release #gameofthrones pic.twitter.com/0IXfy6rTZM

I've sorted the game of thrones coffee cup issue using some lighting tips I got from a mate who worked on the show… pic.twitter.com/nTe24cRjtq

& the coffee cup was still a BETTER cameo than Ed Sheeran #GameOfThrones pic.twitter.com/t1WYB1tz2v

Game of Thrones returns next Sunday on HBO at 9 P.M. ET. With a big battle ahead, let’s hope there are no unexpected coffees there.