Villa Medici In Rome Gets Redesigned By Fendi 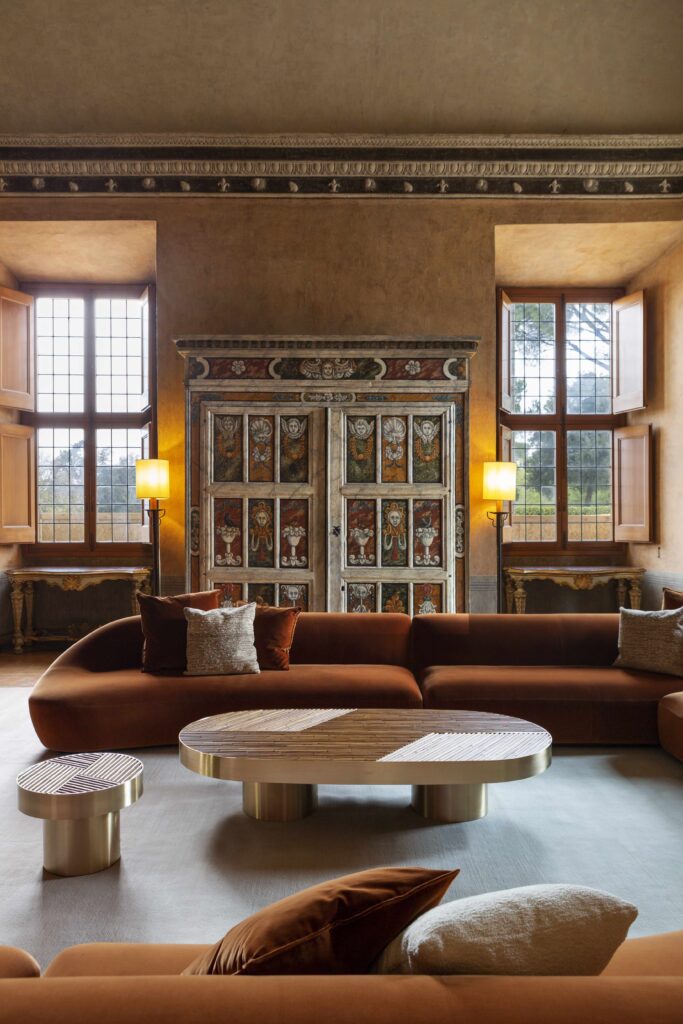 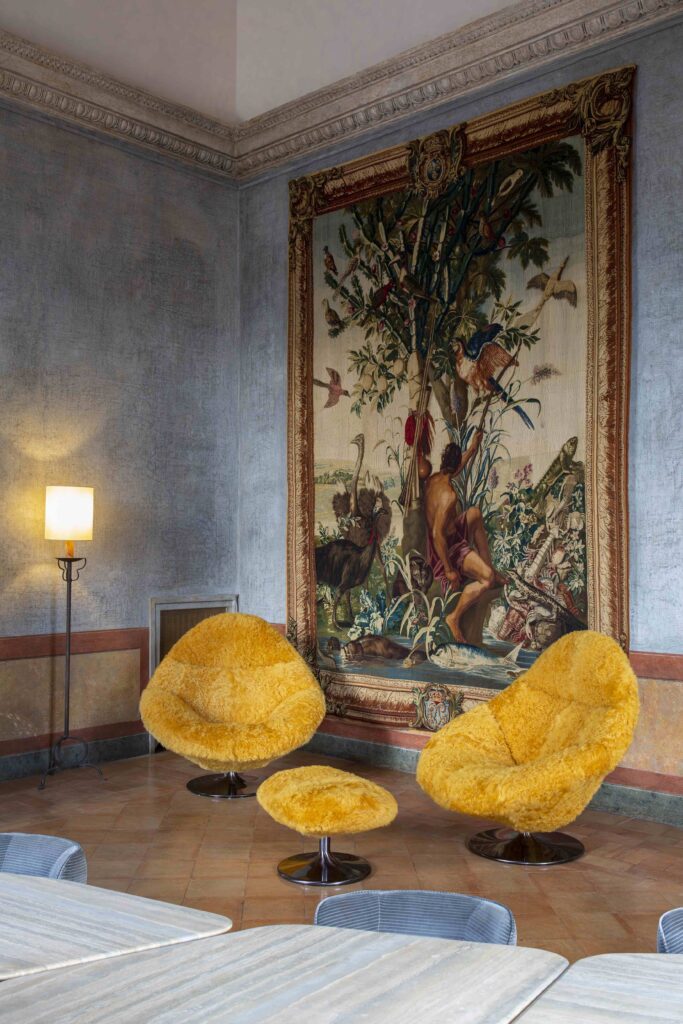 FENDI champions its commitment towards preserving the poetic heritage of Villa Medici by refurbishing its six historic salons – fuelling the Maison’s longstanding connection with the Eternal city of Rome.

In collaboration with the French Academy in Rome and the Mobilier National, FENDI refurbished six historic Salons at Villa Medici in Pincio Hill, Italy. The luxury house will be transforming the beautiful villa with new décor in hopes that it will encourage creativity and contemporary design.

Dubbed a historical stratification, the Villa Medici has a stunning architectural and decorative identity that started during the Renaissance and continued through the centuries. Notable people such as artist, Balthus and designer, Richard Peduzzi had the pleasure of running the institution in the 1960s and 2000s respectively. With them on board, the Villa has seen noteworthy brilliance. 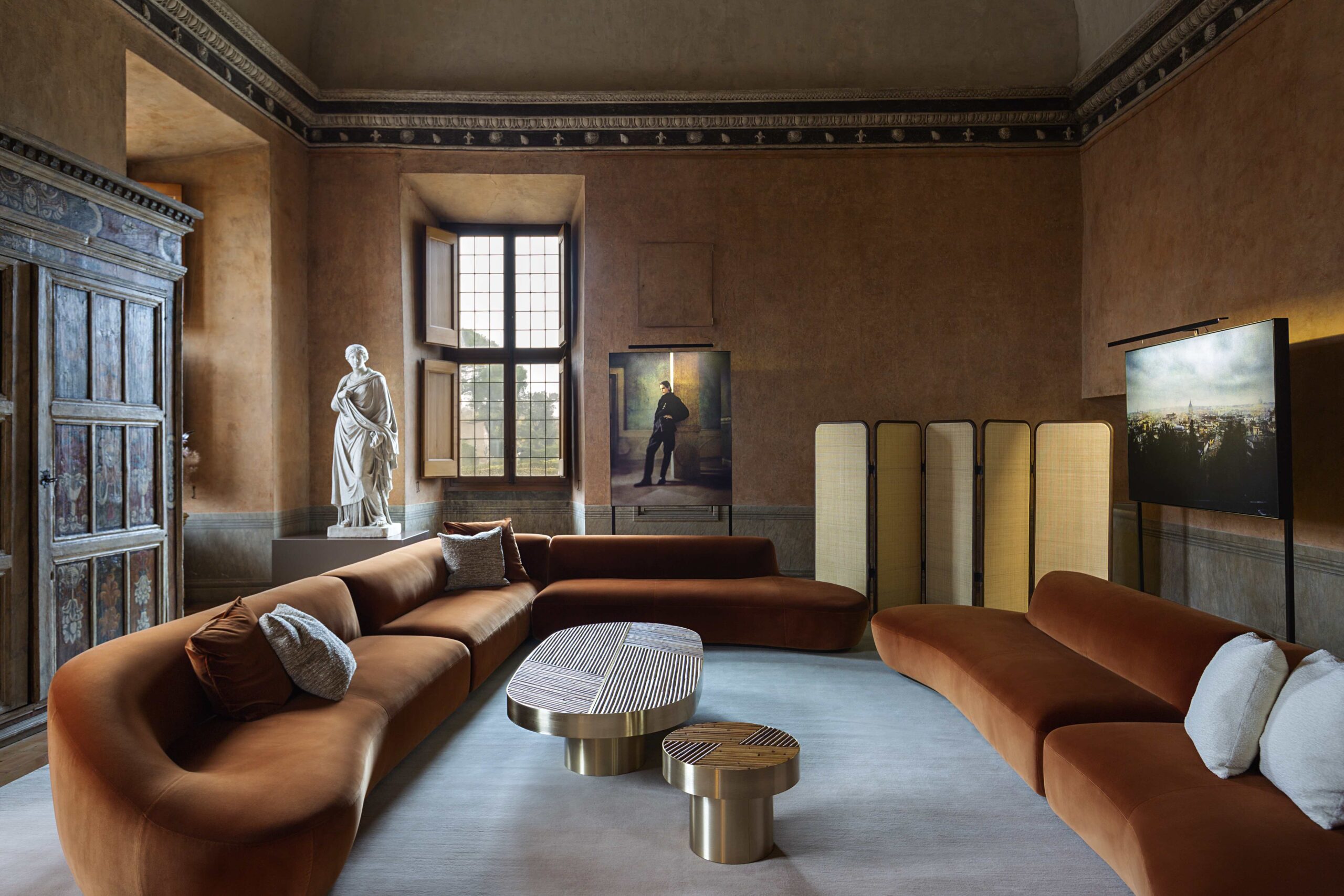 Drawing on these legacies, colour has become the central element for the entire project developed by Kim Jones and Silvia Venturini Fendi for Villa Medici with the support of the Fendi Architecture department.

The newly refurbished Salons see newer designs, interior fittings, and conservation restoration. The original tones of the wall painting have been a starting point in choosing the palette for each room, which is also reflected in their recycled French wool three custom-designed hand-knotted carpets. 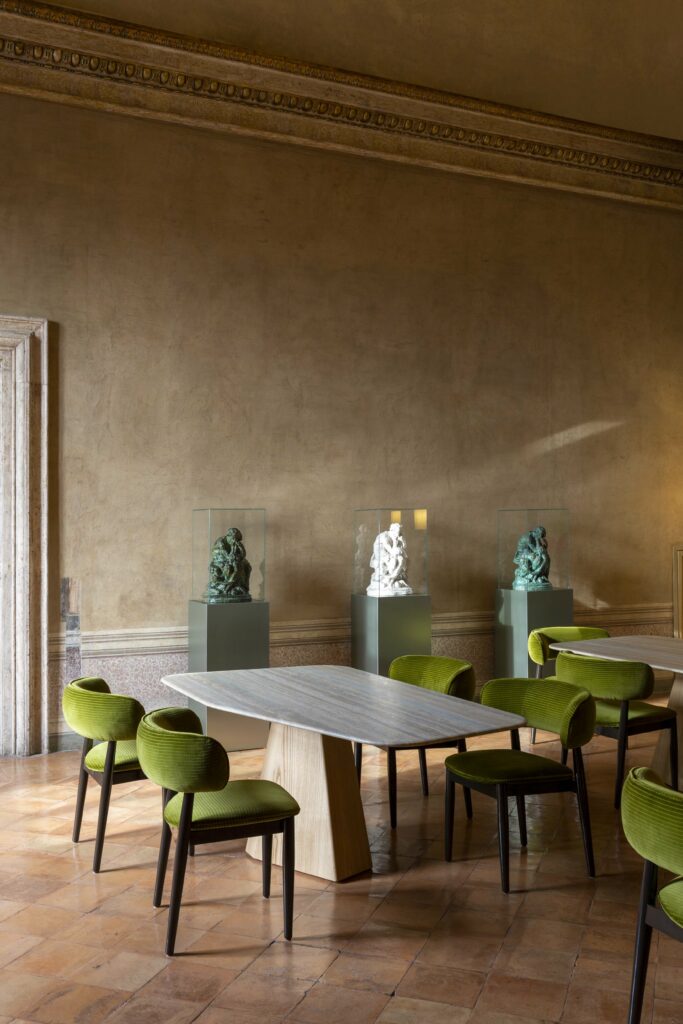 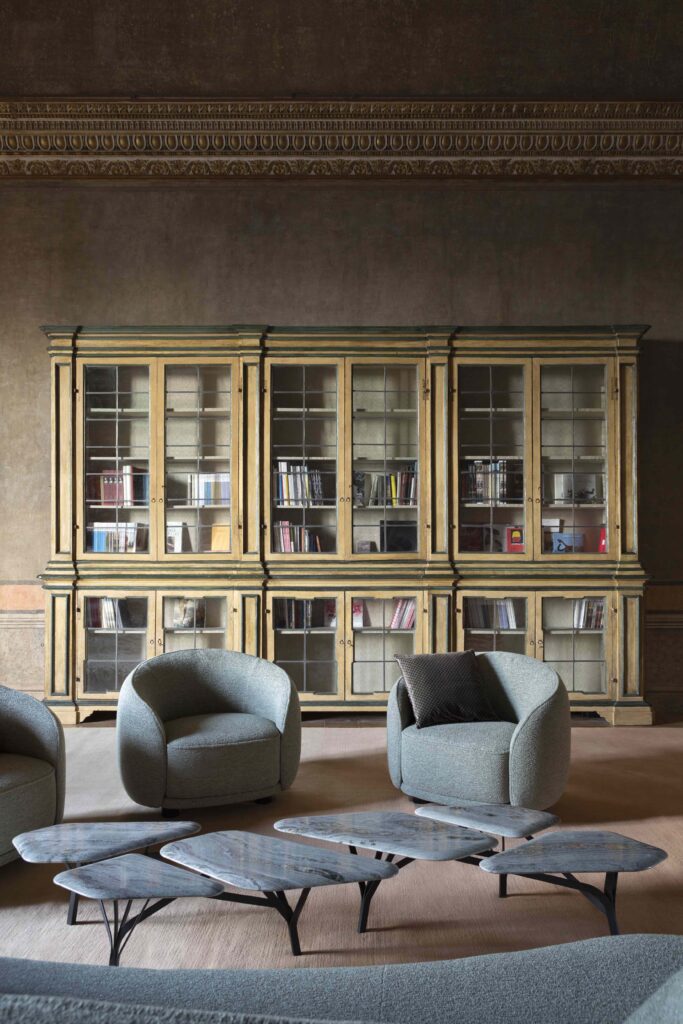 Fendi also included selected pieces of work by Italian designer Chiara Andreatti and French designers Noé Duchaufour-Lawrance, Ronan and Erwan Bouroullec as well as Toan Nguyen. Drawing inspiration from Rome’s distinctive shapes and materials, Noé Duchaufour-Lawrance created the Borghese table in the Salon des Pensionnairess with outlines of the umbrella pines – giving the salon a new image. He also made tables for the Salon de Lecture and Bleu with inspirations drawn from Via Appia Antica paving. The Virgola chairs by Chiara Andreatti are presented in the Salon Bleu and Salon de Lecture, while her Welcome sofa and armchairs for Fendi Casa decorate the Salon des Pensionnaires.

Following the shade of the wall painting, the Sandia sofa designed by Toan Nguyen and produced by Fendi Casa is coloured in a warm orange rusty tone and is the main character of the Petit Salon. The Belleville Armchairs designed by Ronan and Erwan Bouroullec and produced by Vitra, are given pride of place in the Grand Salon at Villa Medici. Marrying a bit of old and new, the ensemble of new furniture blends beautifully with pieces of heritage furniture in the villa.

This selection of furniture will interact with antique furniture that Balthus has chosen or altered, Peduzzi’s geometric lighting designs, and prints by past Academy Fellows of classical sculptures from the 18th century. 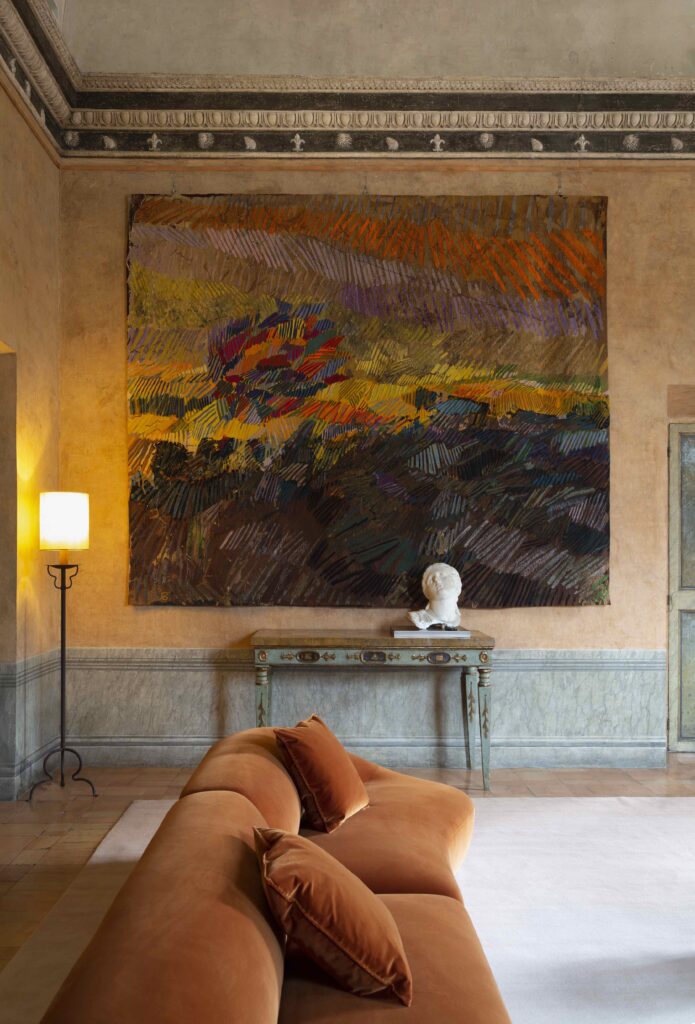 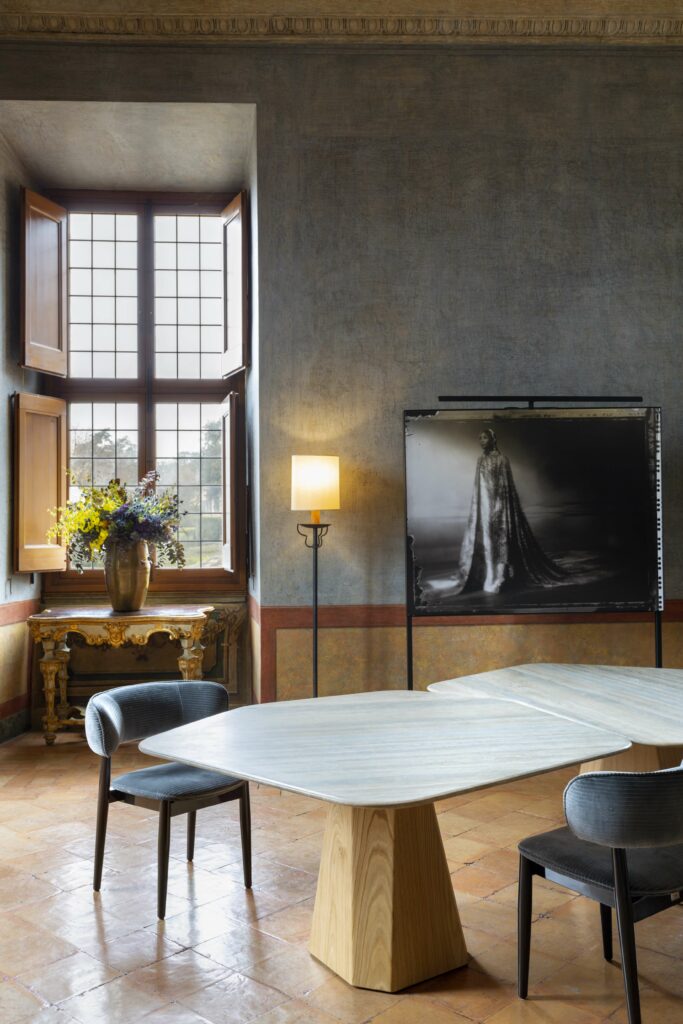 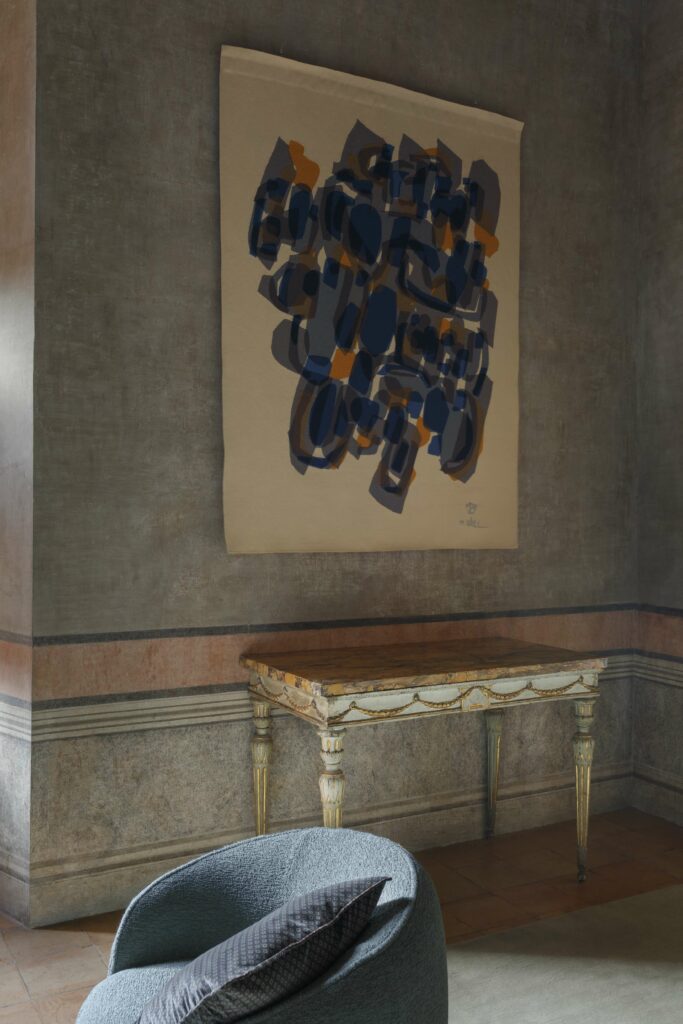 The connection between traditional and modern art is continued on the walls, where Villa Medici is now home to several tapestries, largely created by women artists, in a remarkable collaboration with the Mobilier National. Breathing a new air, the rooms also feature tapestries from the Academy’s collections, including works by Louise Bourgeois, Sheila Hicks, Aurelie Nemours, Alicia Penalba, and Sonia Delaunay, as well as Raoul Ubac, Edoardo Chillida, and Patrick Corillon. These tapestries are from the so-called “Indes” series and the cycle of the Quattro Stagioni on preparatory cartoons by The Grand Salon, where historical and black and white tapestries coexist, is the culmination of the intelligent mixing of tapestries.

The Quattro Stagioni cycle tapestries were restored by the Bobin Tradition workshop over a two-year period, and the decorations in the Grand Salon at Villa Medici were restored under the supervision of Pierre-Antoine Gatier, Chief Architect of historic monuments, during this remarkable introduction of contemporary design to the historic Salons of Villa Medici, which had not undergone any significant changes for 20 years. 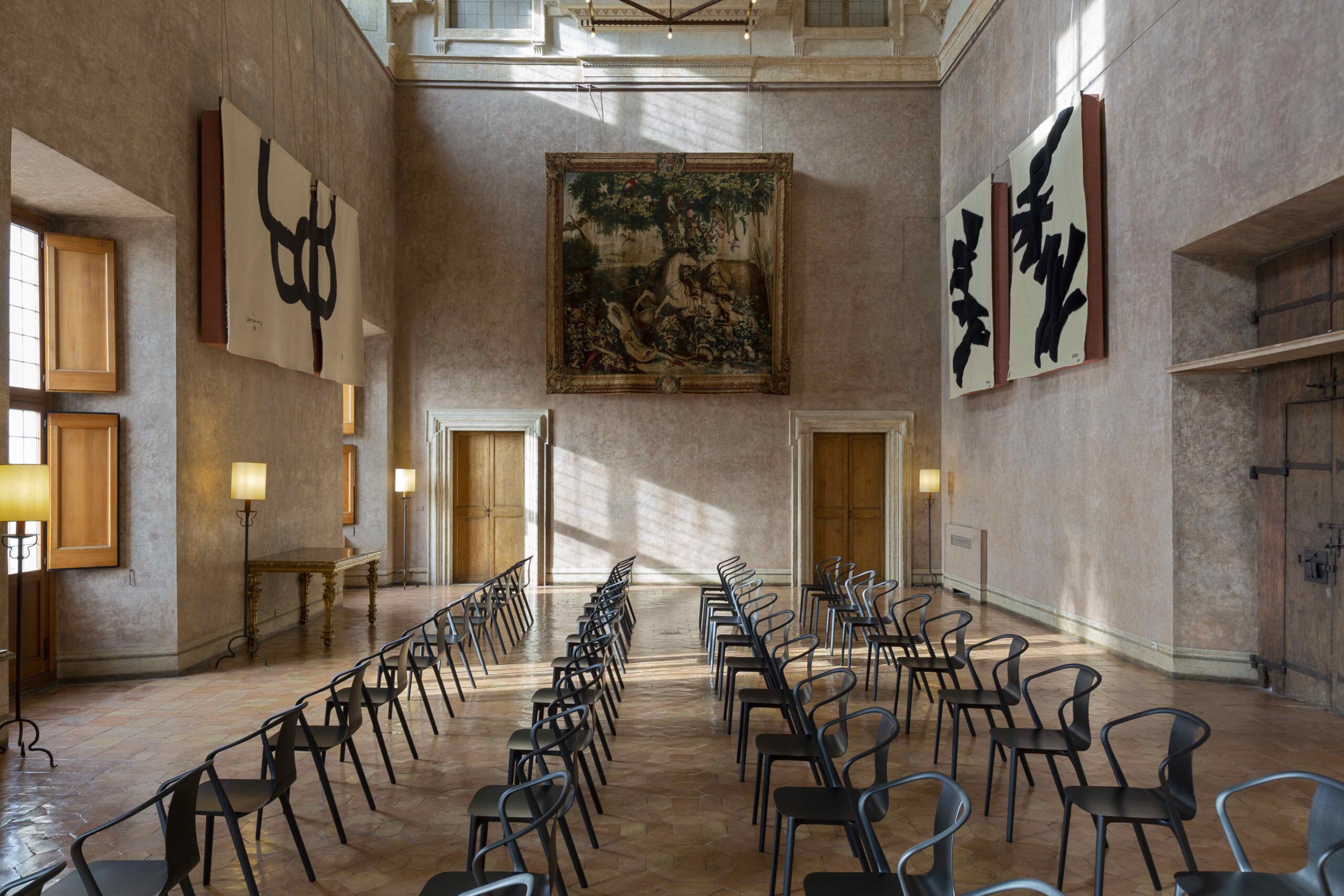 Last but not least, this refurbishment was also an opportunity to upgrade the sound of the Villa Medici’s Salons with the partner Devialet, which drew on its expertise in cutting-edge acoustic engineering to create customised acoustic panels installed behind the tapestries of the Grand Salon. This will help enhance the sound experience of the place without altering it.

Through this unique collaboration and patronage, Fendi confirms its dedication to preserving the creative inheritance.

All images courtesy of Fendi