Hedi Slimane’s Celine Is Here And It Looks Completely Different 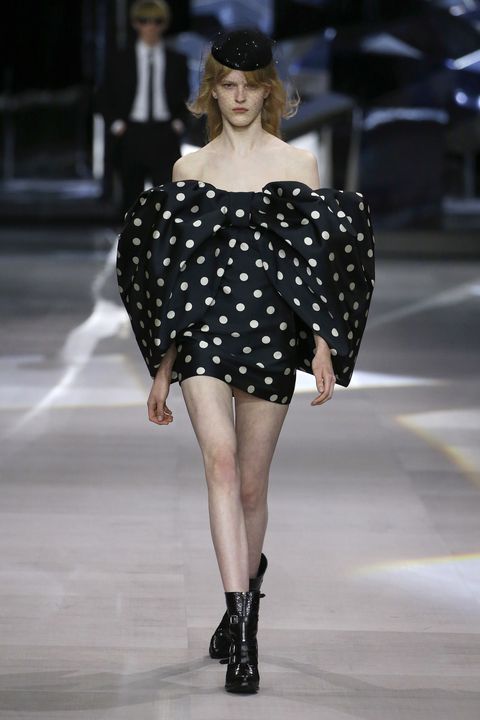 All eyes were on Hedi Slimane today as he sent his first collection for Celine down the runway at Paris Fashion Week. After debuting a new logo (sans the é accent) and his first Celine bag on the arm of Lady Gaga, many wondered what the creative director had up his sleeve for the brand previously helmed by Phoebe Philo. And according to today’s runway show, it’s a whole new Celine.

Sticking to the ’80s glam he made his signature at Saint Laurent, Slimane sent a collection full of glitzy, party-ready looks and suiting down the Celine runway. There were sparkling mini dresses, studded leather, and exaggerated ’80s silhouettes. The collection, which featured both men’s and women’s, included a total of 96 looks.

It was a stark contrast from Phoebe Philo’s tailored masculine-meets-feminine take on the brand. Now, an array of sparkling minis and feathered frocks suggested the new Celine woman is more interested in dressing for the party scene than for the office. As each look hit the runway, it was impossible not to think of Slimane’s Saint Laurent—the similarities so striking.

Slimane was appointed as the new artistic, creative, and image director for Celine back in February, succeeding Phoebe Philo’s 10-year run as creative director. And while his signature ’80s glam-meets-grunge aesthetic seemed to work well at Saint Laurent, it’ll be interesting to see whether that remains true for the Celine woman.