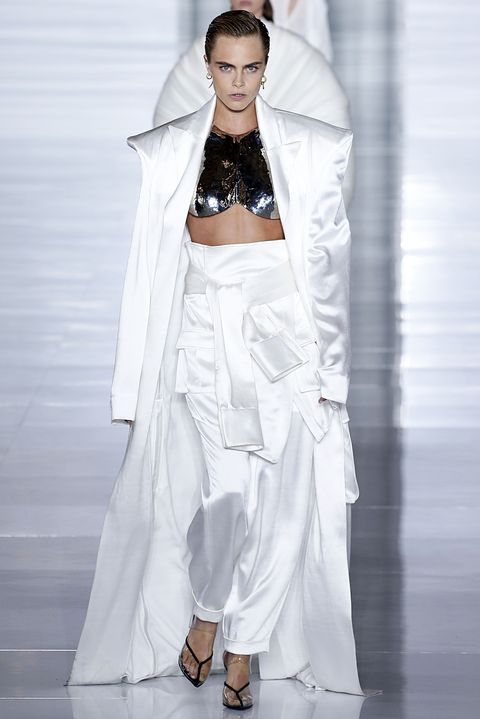 Cara Delevingne seldom walks fashion shows anymore, but today she made a grand return to the runway at Paris Fashion Week. The model-turned-actress opened and closed Balmain’s Spring 2019 show—while lip syncing, no less.

Kicking off the show, Delevingne walked the runway while singing along as Prince’s “When Doves Cry” blasted through the venue. She wore a sweeping white jacket with strong shoulder pads, matching high-waisted pants, and a metal futuristic bra top from the 1980s-inspired collection.

Making a second appearance, Delevingne also closed out the show as the final look in a white and black outfit. As the Balmain Army stormed the runway for the finale walk, she walked alongside Balmain creative director Olivier Rousteing while a medley of ’80s hits played.

Her appearance was a surprise one, as Delevingne has famously put her fashion career on the back burner since pursuing acting and opting to focus more on her mental wellbeing. In the past, she’s opened up about the effects modeling had on her depression. In a 2016 essay for TIME, she wrote:

“I found myself surrendering to the industry’s approval process. I felt like I needed validation from everyone. As a result, I lost sight of myself and what it meant to be happy, what it meant to be successful. I think it all stemmed from a deep-down feeling of wanting people to like me and love me.“

Earlier this year, Delevingne also briefly came out of her runway retirement for Christopher Bailey’s final show as creative director at Burberry. She wore a colorful rainbow fur coat in the Fall 2018 show that celebrated LGBTQ pride.