The piquant colours and heady spices of the south, regal jewels of the north, and mythological living closer to the sea, all these visions of India have inspired fashion from Paul Poiret’s exotic couture of the early 20th century to the current season’s predilection for vibrant paisley and chikan embroidery. And yet, Karl Lagerfeld in his homage Chanel Métiers d’Art Paris-Bombay collection kept it fabulously vicarious – the Kaiser has never been to India – drawing from history, imagination, and particularly Coco Chanel’s sari-styled dresses and traditional Indian-inspired jewellery from her Spring/Summer 1939 Haute Couture collection. 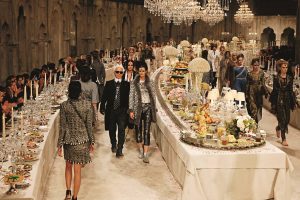 The Grand Palais transformed into a maharaja’s feast for Chanel’s Paris-Bombay Métiers d’Art collection, as Karl Lagerfeld walks the finale with Stella Tennat

“The idea of Paris-Bombay came to me from many visions – the grand palaces, the Maharaja’s dress, India’s connection with England,” Lagerfeld ricochets sidestage in perhaps his twentieth interview, just after his incredible presentation of this Pre-Fall 2012 collection at the Grand Palais in Paris. “Yet it’s a concept of India. More Chanel than India. The Parisian version of an India that doesn’t exist.” To the efferverscence of sparkling gemstones  and heavenly fragrance of jasmine, the Galerie Courbe was completely transformed into a glorious Maharaja’s banquet hall with arched doorways, magnificent crystal chandeliers, and a 50-metre buffet table filled with tiers of exotic fruit, flowers, and exquisite Franco-Indes delicacies from muruku to mint macaroons. In true Chanel irreverence, a miniature Chanel train transporting a crystal decanter of scotch travelled down the table, as Nehru collar-jacketed men served sweet tea, mango lassi, and fine champagne.

Lavishly dressed dinner tables on either side formed a sweeping runway for the collection, a fantastical memoir to an oft-forgotten India, now Bollywoodised almost into caricature (hence, the reference to Bombay instead of Mumbai). Lagerfeld’s dream sets off as gilded tweeds and ivory jackets with subtle references to Indian dress – mirrored embroidery, Nehru collars, sari-draping, handkerchief hems and tunic styles – all opulently accessorised with swathes of pearls and stunning Mughal-inspired costume jewellery handcrafted by Desrues. Then Indian supermodel Jyothsna Chakravarthy walked down the curved runway in an officer-style ensemble of silk shirt with mirror-embroidered epaulets, tie and satchel, alluding to a British India. 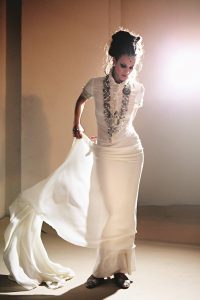 Sari: The elegant Indian dress is a strip of long fabric ranging from four to nine meters, draped around the body in various styles.

“The word ‘colonial’ sounds a little strange today,” Lagerfeld smirks when asked about the empirical touches. “Let’s say a mix of India with England.” After all, Coco Chanel was most inspired by classic British sartorialism – the suiting, tweed, and knitwear – which have become the icons of the house right through to today. This menswear aesthetic, developed during Mme Chanel’s great love affairs with British aristocrats Boy Capel and the Duke of Westminster, runs in parallel times with the Bombay of Lagerfeld, who explains “Indian dress is also very much a man’s look as much as a woman.” Churidars, achkan and salwar kameez, wardrobe staples in Indian dress, were given the ultra-Chanel treatment through the fine artisanal work of its métiers d’art. Opening the show and accompanying Lagerfeld in the final exit of this passage through India was British aristocrat Stella Tennant – Chanel face, forerunner of the garçon look, and a deadringer for Lady Curzon, the “vice-Queen of India”, according to Lagerfeld, who championed Indian artisan skills and fine fabric in the 1900s, and made it fashionable in the West. 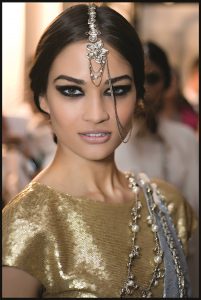 Shanina Shaik: The Australian model of Lithuanian-Pakistani descent is based in New York

The exclusive Chanel Métiers d’Art collection holds a special place between ready-to-wear and haute couture, created annually to showcase the incredible handwork of the heritage couture ateliers acquired by the fashion house in 2002, with embroiderers Montex the latest addition in 2011. The bijoux showcase takes the spirit of a destination – ancient to modern, from Shanghai to London; Miami to Moscow, and previously, Byzantium  – merged with the Paris of Chanel, and  often staged in the city with equally spectacular sets. Among the eight featured prominently in Paris-Bombay were the handcrafted henna-painted thigh boots and Indian sandals by Massaro; metal headpieces by Maison Michel; buttons and costume jewellery by Desrues; and Indian embroidery by Lesage (sadly, Francois Lesage passed away just two days before the show). The twist is that while the rest of the fashion world mines India’s expertise for beading, embroidering and fine fabric, Lagerfeld reverses the trade by commissioning Parisian artisans to replicate the luxurious and refined traditional Indian craft.

For Paris-Bombay, Lagerfeld was determined to keep it “chic, elegant and very fashionable.” He explains, “I didn’t want a flashy interpretation but like what you see on the palaces, where the colours are a lot more refined. Even the jewels of the Maharaja were not flashy, and while they wore heavy brocades, their clothes were based on everyday Indian dress.” The palette was kept predominately ivory, black and warmly metallic, bursting into dazzling turquoise, and combinations of ruby red and bronze, hot pink and gold, as if in homage to Diana Vreeland’s famous quote: “Pink is the navy blue of India”. 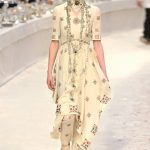 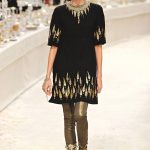 Churidar: Known as ‘giraffe pants’, the skinny trousers in fine cotton or silk are worn under kurtas and jackets. 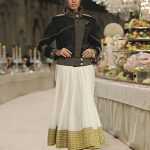 Lengha: These full, colourful skirts loved by women in Rajasthan and Gujarat is worth with a midriff baring coli (bodice) 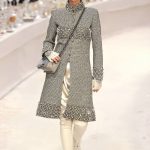 Sherwani: The Nehru collared-jacket worn by Indian nobility made a key feature in the Paris-Bombay collection. 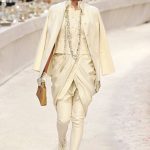 Lakshmi Menon: The Indian model has been working the international runways of Hermes, Chanel and Jean-Paul Gaultier, and featured on the Pirelli 2011 calender, shot by Karl Lagerfeld

The fashion fantasy extended to print and gilded lace dresses, paisley on sheer silks, embroidered knitwear, metallic saris and hand-embroidered floral motifs, all with a traditional Indian twist, yet quintessentially Parisian. And it would not be Chanel without Lagerfeld’s brand of rock chic, with cultural nods through Michel Gaubert’s show soundtrack featuring ‘My Sweet Lord’ by George Harrison from the 1970 film Bombay Talkie, and ‘Instant Karma!’ by John Lennon, taken through to the Beatles’ era of Maharishi Mahesh Yogi, in the models’ dreadlocks, neo-hippie styled tunics, and embellished guitar-strapped  bags slung nonchalantly across the body. To enhance the experience, six Indian models and famous Indian actresses including Freida Pinto and Sonam Kapoor brought their ethnic beauty to the stage.

Clever commerce, the critics reviewed of Chanel’s apparent seduction of this huge emerging market by showcasing its cultural treasures. Only a genius could pull off a show richly layered in expression and technique, and yet make it authentic – and a wearable luxury.  “Chanel is for everyday life, not just for the red carpet,” says Lagerfeld. “Like in India. They wear Chanel with an element of their culture for daily life; they have a lot of pride for their traditional wear. And that’s chic.”