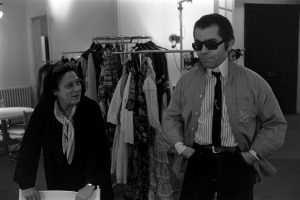 He adopted some of his first style signatures – dark glasses and a ponytail – as early as the late Seventies.