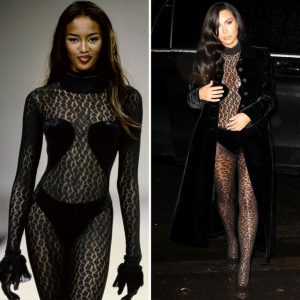 From Mugler to Alaia and Versace, Kim Kardashian has been wearing a ton of archival designer looks lately (much to Fashion Nova’s delight). One thing the outfits have in common? They were all worn by Naomi Campbell first in the ’90s.

Instagram account Diet Prada called out Kim’s channeling of the iconic supermodel in a series of outfit comparison photos. Most recently, she wore a vintage Versace slip dress to Chance the Rapper’s wedding—the same look that Naomi first debuted on the runway in 1996.

Just last week, the reality star had an Instagram photo shoot in a sexy leopard catsuit and beret by Alaïa. The sheer look was part of the designer’s 1991 collection, which Naomi also coincidentally wore on the runway as well.

Naomi and Kim in the same Alaia catsuit, Getty Images

Keeping up with her vintage Versace streak, Kim has worn several ’90s looks from the Italian fashion house that were first debuted by Naomi. In December, she donned a silver metallic gown from Versace’s 1998 collection to the premiere of The Cher Showon Broadway. Naomi previously wore the look on the ’98 runway and then again for a red carpet event in 2015. 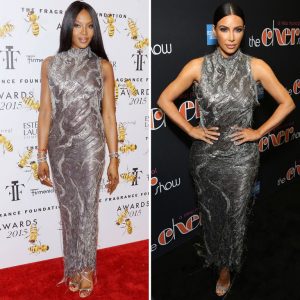 Naomi in 2015; Kim in 2018. The supermodel previously debuted this Versace gown on the runway in 1998, Getty Images

And then there was this sparkling chainmail mini dress that both women also wore. Naomi donned the Versace look in 1997, and then Kim wore the outfit to attend Versace’s runway show in 2018. 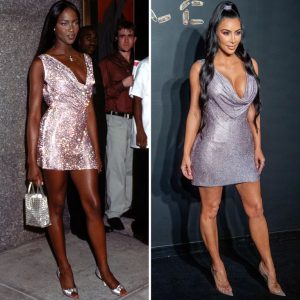 Naomi and Kim in Versace

To be fair, who wouldn’t want to channel Naomi Campbell’s iconic style? Especially when revisiting some of the greatest ’90s fashion moments. No harm in recreating an icon’s most legendary designer looks—so long as they don’t end up on Fashion Nova.