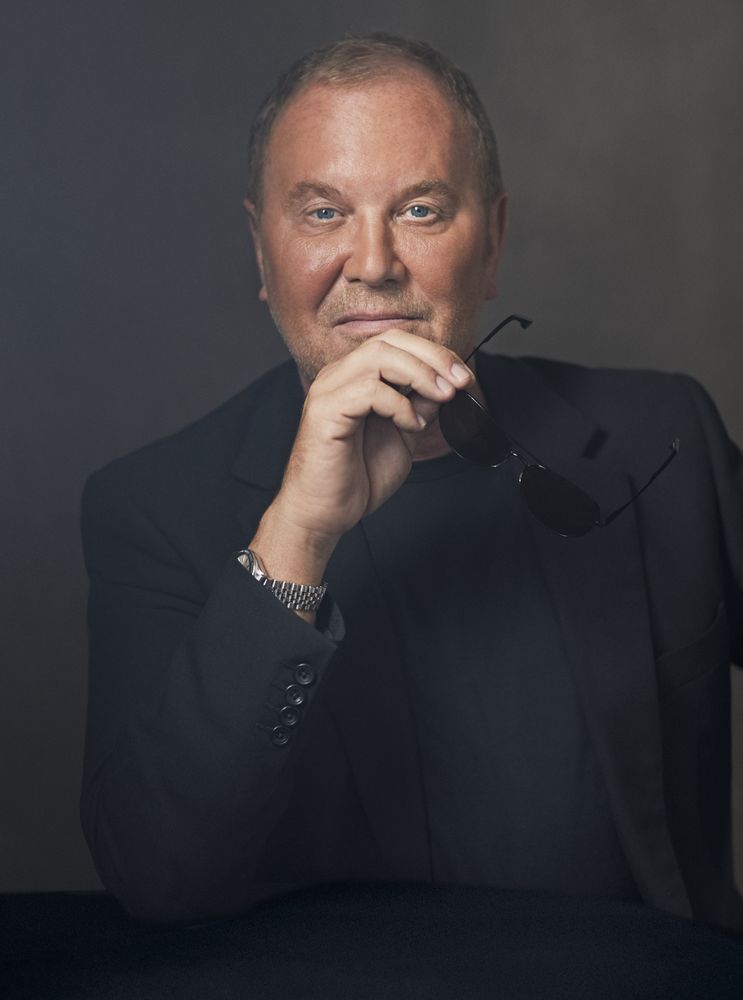 With a love for dressing women of all ages and sizes, Michael Kors has built a global empire based on inclusivity, individuality and a fervent belief that fashion should inspire happiness. Justine Picardie meets the billionaire designer driven by a desire to bring out the best in everyone.

In an industry full of big personalities, Michael Kors is one of the biggest – but not in a terrifying, tantrum-throwing way. Instead, he is warm, funny, upbeat and positive – all of which characteristics are also evident on the runway of his fashion shows. Long before anyone started talking about diversity, you’d see women of all ages, shapes, sizes and colours on the Kors catwalk; and perhaps most radical of all, models who look happy and healthy, rather than miserably hungry.

Indeed, it’s hard not to feel cheerful when one is in his company, as I am reminded when we meet at his new London townhouse boutique on Bond Street. “I’m really happy to be here, and really happy to see you,” he says, with his signature sunny smile, and his exuberance fills the room. At 60, he is one of the great icons of American design – famed for his vision of sleek, sporty, jet-set luxury – with an ability to blend glamour with an apparently effortless joie de vivre. Kors attributes his success to growing up on Long Island in a family of strong women who cared fervidly about fashion.

“They were all very specific in their point of view, they were all very opinionated,” he says. “To this day, the question I hate the most is when people say, “Who’s your muse?” And I say, “Muse? If I’m only designing for one woman, then we’re in trouble.””Instead, he remembers his mother and her sister-in-law engaging in heartfelt debates “over whether taupe or camel was a better colour for a winter coat”. (For the record, he believes that camel looks good on a blonde, like his mother, but that his dark-haired aunt was better suited to taupe.)

Clearly, something of this ardour emerged in the young Michael Kors. His mother, a former model named Joan Hamburger, separated from his father when he was still a baby; hence his formative memory of redesigning his mother’s second wedding dress, when he was just five years old. “My grandmother was with us at the bridal salon, and my mother had ordered her dress, and was having the first fitting. It was floor-length, heavy cream shantung, very Balenciaga, and covered in bows. When my mother tried it on, I just went silent. My mother asked, “What’s wrong?” and I said, “Those bows are so terrible!””

Needless to say, his mother followed his advice, the bows were cut off, and lo, a far more beautiful bridal gown emerged, along with a nascent designer. By six, he knew exactly what he wanted to wear himself: a black faux-fur coat, inspired by the one worn by the legendary American football player Joe Namath. “He was just the epitome of the cool guy,” says Kors. “Very handsome, very good-looking and a great athlete who loved fashion.”

When the young Michael spotted a child’s version of the black coat at Saks Fifth Avenue, he told his family that this was what he wanted forChristmas. “I was probably the only child who wasn’t interested in toys at all.” And much to his everlasting joy, he woke up on Christmas morning to unwrap the coat of his dreams, a present from his fashion-loving grandmother.

Kors’ passion for statement coats has continued – just think of the fabulous cashmere designs that he created for Rene Russo in The Thomas Crown Affair – but he’s as good at making women look great in dresses, too. (Take Michelle Obama, who redefined the sartorial aesthetic of First Ladies in an array of perfectly cut Kors gowns.) “My aim is to make women feel their best selves,” he says. “She could be 85, she could be 16; she could be a size 22 or a size four.” 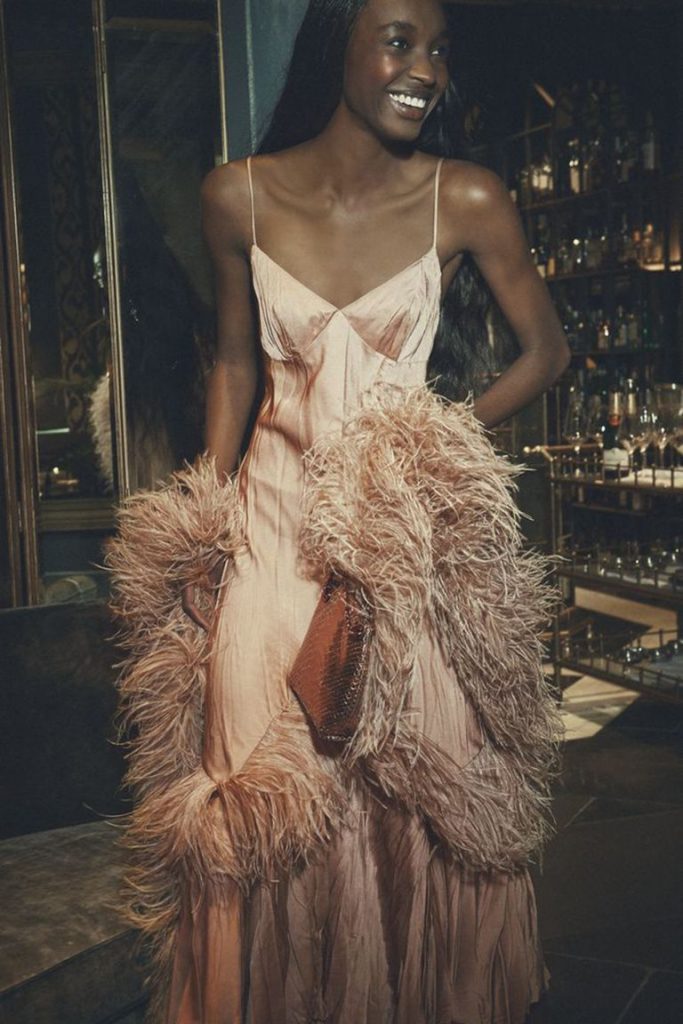 As such, he is irked by the notion that designers should change their approach when it comes to dressing so-called ‘real women’, as opposed to mannequins. In this regard, he has decades of experience: by the age of 11, he had already opened his first shop in the basement of his family home in suburban Long Island, selling tie-dye T-shirts and jeans of his own making; at 17, he was working for Lothar’s, an upmarket Manhattan boutique on 57th Street, where his customers included Jackie Kennedy, Goldie Hawn and Diana Ross.

There, he rapidly progressed from being a sales assistant to the in-house designer, and was talent-spotted by Bergdorf Goodman’s fashion director. In 1981, when Kors was just 22, he launched his own womenswear collection, and although his career has suffered the occasional setback – including a serious financial crisis in 1993– he has always bounced back.

A subsequent stint working for LVMH from 1997 to 2003, when he reinvented Celine with considerable aplomb, gave him far more insight into the international market; and his time as a judge on Project Runway, the American reality-television show, made him a household name, with a unique series of observations on the contestants’ fashion designs (‘Comme des Garçons goes to the Amish country’; ‘Voodoo princess in hell’; ‘There isn’t a woman on the planet who would say, “Oh, I want people to think I have a fat butt and big hips”’; ‘Tight satin? No human being should wear tight satin!’; ‘Transvestite flamenco dancer at a funeral’; ‘A legging that Friar Tuck would wear…’). 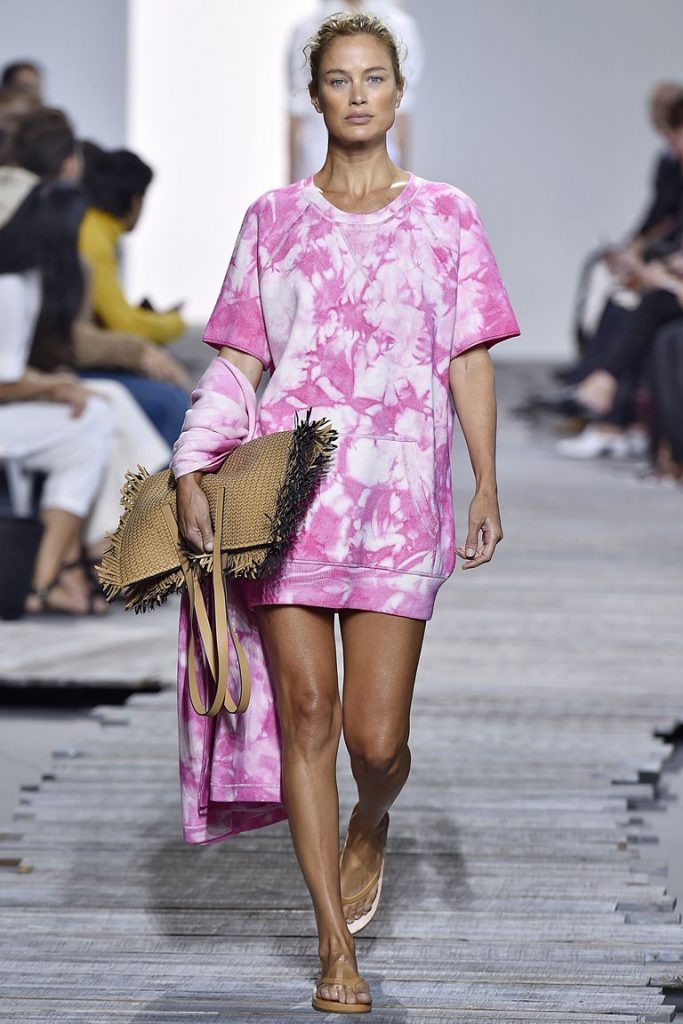 Nowadays, Kors is a billionaire and honorary chairman and chief creative officer of his namesake brand, which is owned by Capri Holdings, the group that also heads up Jimmy Choo and Versace. At this point, he could easily afford to stop working and devote himself full-time to his (already considerable) philanthropic activities. But he shows no sign of slowing down; indeed, he is married to his job, in the sense that his husband and long-standing partner, Lance Le Pere, is the EVP creative director for the womenswear collection at Michael Kors. Theirs is a relentlessly busy schedule of deadlines, travel and business commitments – “If I think about the calendar, it keeps me awake at night, so I’ve learnt now not to look, and just try to be in the moment” – but with his perma-tan and warm laugh, he still manages to project an air of relaxed bonhomie, rather than highly-strung stress. 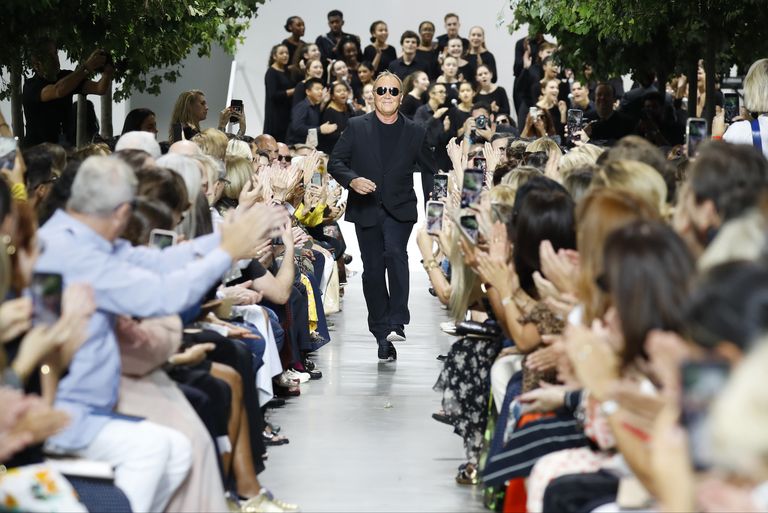 The thinking behind how he maintains this equilibrium may also provide a clue as to the continuing appeal of his designs. It’s contained within a piece of advice that he says he would give to his younger self, which is “not to be as hard on myself. At 22, 23, I just beat myself up over everything, for not being perfect enough.” The realisation that there could be a benefit to embracing imperfection came, he says, when he read a review of one of his collections by Amy Spindler (a former fashion critic and style editor of The New York Times who died, too young, of a brain tumour at the age of 40). “Amy was a wonderful writer, and after one of my shows, she wrote that “It was perfect to a fault”. I really stewed after that, and then I saw her, and she said, “It’s OK not to be perfect! Let the freak flag fly, Michael!””

All of which might sound unexpected for a man who has become synonymous with the flawless elegance of his vision – from aspirational accessories to high fashion and seductive fragrance, showcased within the graceful surroundings of his shops around the world. But what gives this glossy style its substance is his understanding of human foibles and idiosyncrasies. For in the democratic world of Michael Kors, everyone is entitled to wear the dress (or the coat) of their dreams, and in doing so, feel more optimistic about whatsoever lies ahead.