Fashion, Runway
Prev26 of 45Next 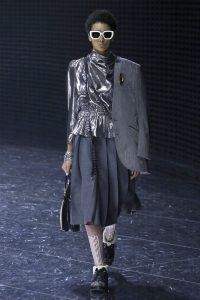 Alessandro Michele has been a breakout star in the fashion realm, but that hasn’t made him immune to controversy. The designer has handled his missteps—specifically racially charged imagery on his runway, head-on, which could make the designer’s inspiration of masks somewhat confounding. The show notes reference Hannah Arendt’s 1958 book “The Human Condition.” Specifically, Arendt “reminds us that we are persons when we choose the mask through which we appear on the world’s stage…as a distinct and unique being among equals,” says Arendt.

So perhaps, Michele is making a statement about the equality of humanity—how that plays into spiked collars, houndstooth suiting, Gucci logo knee pads, sweater dresses, and a ’70s inspired tiger print coat remains a mystery. But Gucci’s legions of fans will be pleased to see more, new Michele statements to invest in on today’s runway. -Kerry Pieri