A Tribute to Azzedine Alaïa

Remembering his unparalleled skill as a couturier and his almost fetishistic admiration of the female form, BAZAAR pays tribute to fashion’s late, legendary king of cling. 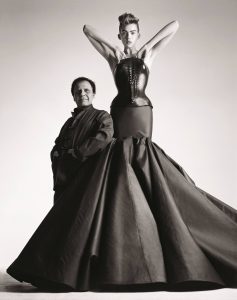 Azzedine Alaïa with model Elise Crombez, wearing a confection from his Autumn/Winter ’02 collection, photographed by Patrick Demarchelier, from Alaïa: Azzedine Alaïa In The 21st Century

“Azzedine was the true meaning of ‘original’. We should all aspire to live life as purely as he did and to be as focused on and devoted to our work as he was to his … Like a true artist, he followed his instinct and simply did what he loved.”

It was BAZAAR global fashion director Carine Roitfeld who summed up what a lot of us were thinking as the fashion world learned of Azzedine Alaïa’s passing in Paris on November 18. He was 82.

Alaïa was a God; a small God at barely five feet tall, but a God nonetheless. His influence on fashion was massive; so much so that its reverberations could be felt even at the recent round of international collections. Who could fail to see the master couturier’s handwriting within Jacquemus’s voluminous white shirting and body-skimming dresses held up with a sliver of shoestring, or his sexually charged dynamic within Jonathan Anderson’s asymmetric ruffles, corkscrew pattern-cutting, and panels of exposed flesh at Loewe?

“I love working on the cut, doing fittings, seeing the reaction a woman has when she puts something on; what she thinks and how she feels,” Alaïa once told me over lunch in the kitchen of his Paris headquarters, where we discussed his signature second-skin silhouette that he created when challenging the boundaries of flesh and fabric. “When I first started, [the team] was always living as a small family together, and that’s why I won’t change. Everyone here eats together.”

It was this love of the familial and the female form that inspired devotion in everybody, especially the women who played the role of Amazonian apostle to his impish saviour. Among these
disciples were Farida Khelfa (the former Schiaparelli ambassador who was his muse) and the bevy of 1990s supermodels—Stephanie Seymour, Linda Evangelista, and Naomi Campbell among them—who came to define an era dressed “off-duty” in his knitted leopard-patterned dresses and femme fatale booties. “No one understood the body of a woman more than you. That made us feel good about ourselves inside out,” Campbell posted on her Instagram account amid the aftershock of the news. “You ignited happiness to all who were around you, from dancing in the kitchen to playing practical jokes.”

His impishness was only outshone by his talent as a couturier; his clothes always having the mercurial quality of being both radically contemporary and classically beautiful at the same time. “Real fashion, real creativity, can’t be achieved with making all these collections four, five, six times a year,” Alaïa told me, frustrated with fashion’s ever-quickening whirligig. “It’s much better to make one outfit that sells than to come up with hundreds of designs that just hang on racks. I’m here doing the sewing and all the fittings, so the pace is much slower—it’s my métier.”

Indeed, Alaïa was one of the last of the great 20th-century designers able to pattern-cut and sew a complex garment from start to finish; a skill that in Alaïa’s case can be traced to his roots in Tunisia, where his mother’s French midwife, Madame Pinot, supplied him with fashion magazines and lied about his age in order to get him into the local art school, where he studied sculpture. Having learned to sew, Alaïa started out making copies of dresses shown by the grand maisons de couture for Tunis socialites.

It wasn’t long before Paris came calling in the form of a job offer from the grandest couture maison of them all: Christian Dior. However, after only five days of sewing lapels, he was fired on the grounds of his work permit. “Sometimes it’s good to ‘lose’,” Alaïa said. “Then you can start something new.”

That “something new” was a job working as personal couturier, cook, and childminder to the Comtesse de Blégiers, in whose company he came to know the Parisian intelligentsia and artistic elite, and began making costumes for the topless dance troupe at the Crazy Horse Saloon. “I thought it was shameful to make outfits for topless dancers at first, but it wasn’t at all,” he said. “The work had to be very precise: even a tiny quilted G-string took on tremendous importance and had to fall exactly right. I learned a lot about respect for the body there.”

The rest, as they say, is history. Sell-out retrospectives, the unconditional respect of his designer contemporaries, and a place in fashion’s pantheon of talent—Alaïa was awarded the laurels he so deserved. “To me, I have not done my best things. They are still to come,” he once said. “The story of fashion will tell what I have achieved.”