Against All Odds: The Story of South Korean DJ Peggy Gou’s Incredible Journey 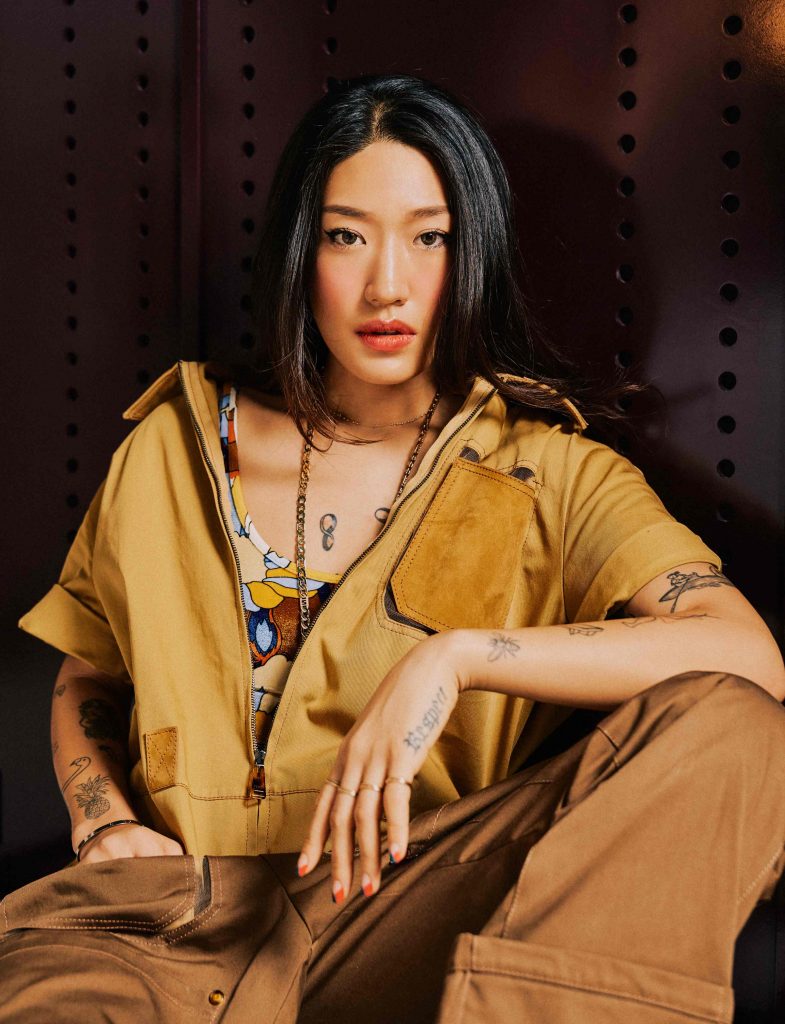 Jumpsuit; swimsuit (worn inside); and optical chain (worn as necklace), all from Fendi. Necklace; bracelet; and rings, all Peggy’s own.

There’s nothing more harrowing than having one of the world’s top DJs ask you to put some music on. Quite nervously, for fear of being judged for my confusingly polarised playlist (a mix of Sepultura metal, Girls Aloud pop, and Arvo Pärt classics), I hesitated going through my Spotify, but thankfully for me, South Korean artiste and all-round cool girl Peggy Gou, stepped in. “Let’s play A Tribe Called Quest!” she suggested, to my absolute relief and our crew’s jubilation, saving them from the torture of my wacked-out curation.

Having landed in Kuala Lumpur from Berlin, just four hours shy of our cover shoot, I was surprised to see how amazingly upbeat she was, complete with glowing skin and signature cat-eye liner. “I’m soooo sick, I’m sorry,” she said apologetically, greeting me with a hug before sitting herself down on a plush armchair in The Ormond Chow Kit’s suite, bathed in afternoon sunlight on a humid Saturday. At first glance, she was as real as it gets: warm, unpretentious, and hilariously aloof. “It’s been a long flight for me, and for some strange reason all I ate was popcorn on the way here!” she said, as I shook my head in disbelief, noting how the 28-year-old was slated to headline that very night as part of Ibiza-based entertainment connoisseur, Circoloco. A seminal event for Kuala Lumpur no less, considering how tickets were sold out within days from its release, putting Malaysia on the map for international club scenes. Indeed, it has been a while since Malaysia had hosted such an illustrious event (remember that time when Future Music Festival Asia got cancelled in 2014?), and so when news broke that one of the world’s top DJs was to reach our shores, it was no surprise that her arrival was hyped to the nth degree, with fans customising mementos from “Gou-ala Lumpur” tees, to “Just Gou It” posters. A heavily pregnant friend of mine (you’ll know it when you head on to Peggy’s own Instagram @peggygou_ for proof) had even decked herself out in a personalised “Preggy Gou” T-shirt, much to the delight of her 1.3 million fans on Instagram, sparking comments like “Defo best one so far!” by street style favourite Veronika Heilbrunner, and “She wins” by Canadian producer and DJ, Blond:ish. 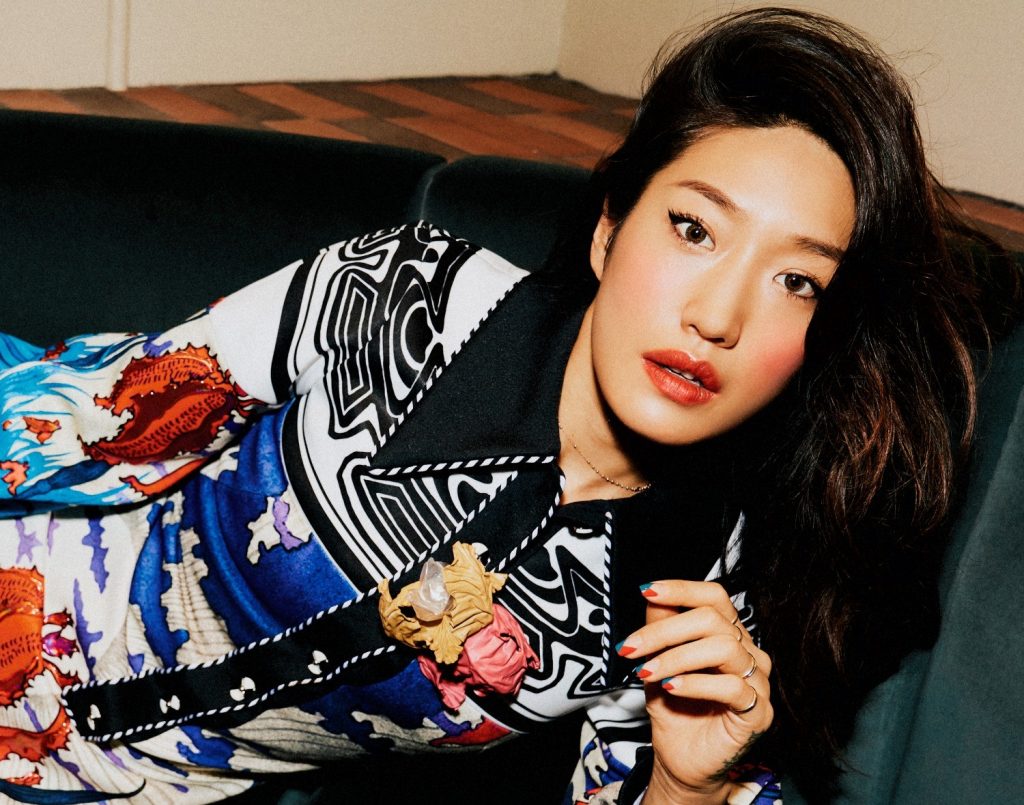 Dress; and brooch, both from Louis Vuitton. Necklace; and rings, both Peggy’s own.

There’s a reason to this almost cult-like following of hers. With her unique mix of K-house, disco, and techno, the Incheon-born DJ had already headlined Glastonbury and Coachella, while in September 2018, she won Best Track for “It Makes You Forget (Itgehane)” at the AIM Independent Music Awards. Elsewhere outside the music universe, the talented powerhouse had caught the attention of fashion’s glitterati, becoming a front-row fixture at fashion week and events. When she was approached by Louis Vuitton men’s creative director Virgil Abloh (he eventually booked Peggy for his joint Off-White event with Dazed magazine), and attending the most recent Louis Vuitton Spring/Summer ’20 show where she rubbed shoulders alongside the likes of musicians Mark Ronson and Justin Timberlake, it was clear that she had hit global celeb-dom.

Funnily enough, it was exactly through fashion that sparked her interest in music. A Harper’s BAZAAR Korea alumni, Peggy mentioned that she had “always wanted to become a stylist, and then I realised I sucked at it,” she said, as our glam team prepped for our shoot ahead. “I am only good at styling myself. I’ve realised that styling myself and styling other people are two totally different things. But while I was discovering that, I discovered DJ-ing and music, and that was when I learned production as well.” Eventually, Peggy found herself making music 24 hours a day, a skill she had picked up from a friend in South Korea before relocating to Berlin in 2013 to pursue it further, working part time at a record store while honing her craft. “Back when I was in London studying fashion, all I did was attend classes—even though I never actually went to them, anyway,” she revealed, laughing. It was then when Peggy was first discovered by famed London nightclub Cirque Le Soir club promoter, resulting in her DJ residency at the Book Club in East London. “I failed my course and my parents were … not too happy about it. They said to me, ‘I swear to you, if you don’t pass your degree, we won’t buy your return ticket back home!’” Peggy expressed, mimicking the tone of a concerned mother. Fortunately for her, she graduated from London College of Fashion, enabling her to focus on her career thereafter.

“In the beginning, I remember they were like, ‘You want to do fashion, and now you want to do music? What next? Are you going to change your mind again, after one-two years?’ But now, they’re my best friends. I did tell them that I’d prove my passion to them, and if I fail, I’ll come back home and pay them back every cent they gave me.” Which evidently never happened as her relentless spirit led to her spinning at Berlin’s most exclusive nightclub Berghain. 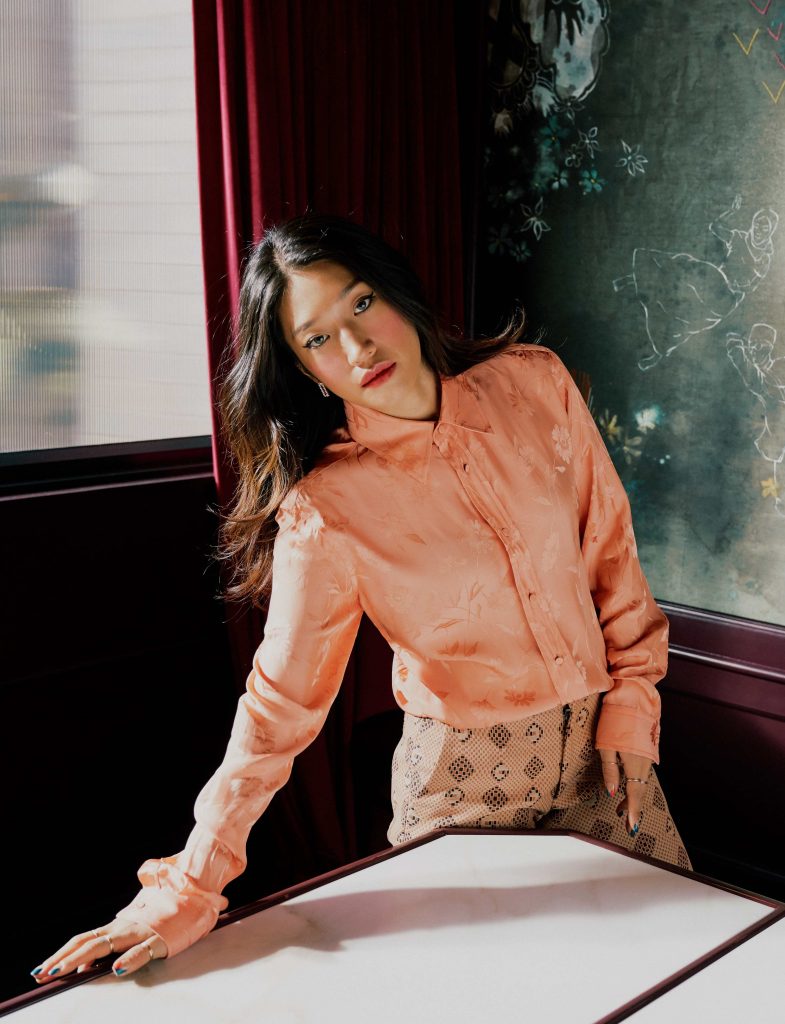 Shirt; and pants, both from Gucci. Earring, Chopard. Rings, Peggy’s own.

In some ways, her experience resonated with my own teenage years, remembering the backlash I had received when I first told my parents my wish to pursue fashion. Because, let’s face it—growing up Asian meant that our priorities were skewed towards other more lucrative fields—law, finance, et al. And going against the grain meant having to put all that our parents had worked hard for on the line. I recounted my ordeal to Peggy, to which she responded, “Well, you know … many Asian parents out there are very strict. My parents complained a lot, but they never really held me back from doing what I needed to do. I’m very appreciative of them.”

You could tell it’s what spurred her tenacity. After all, you don’t put all those years out without cultivating some perseverance, evident enough in her current work ethic. It’s evident even by the tone of her voice as she spoke; the fervour, talking animatedly with her hands gesturing in all directions in the air. With zero f*cks given, she most certainly sticks it to the man, but in the most feminist sense. “Every time someone asks me how it feels to be one of the biggest female DJs at the moment, I always tell them that it’s wrong to put a female title in it,” she sighed, as we talked about her latest achievements. “Well, first of all, why don’t you just ask me what it’s like to be a DJ?” She has a point. In a field dominated by men, the success of women is more often than not measured against her feminine peers, instead of against the entire industry. It’s about equality after all, and on that note Peggy has gone the distance to perpetuate that sentiment through her career. “I want to do more than just becoming a DJ,” she expressed, her ambitious spirit and drive now clearer than ever. “I want to get into more art stuff, and maybe commit myself to more fashion stuff, too.” 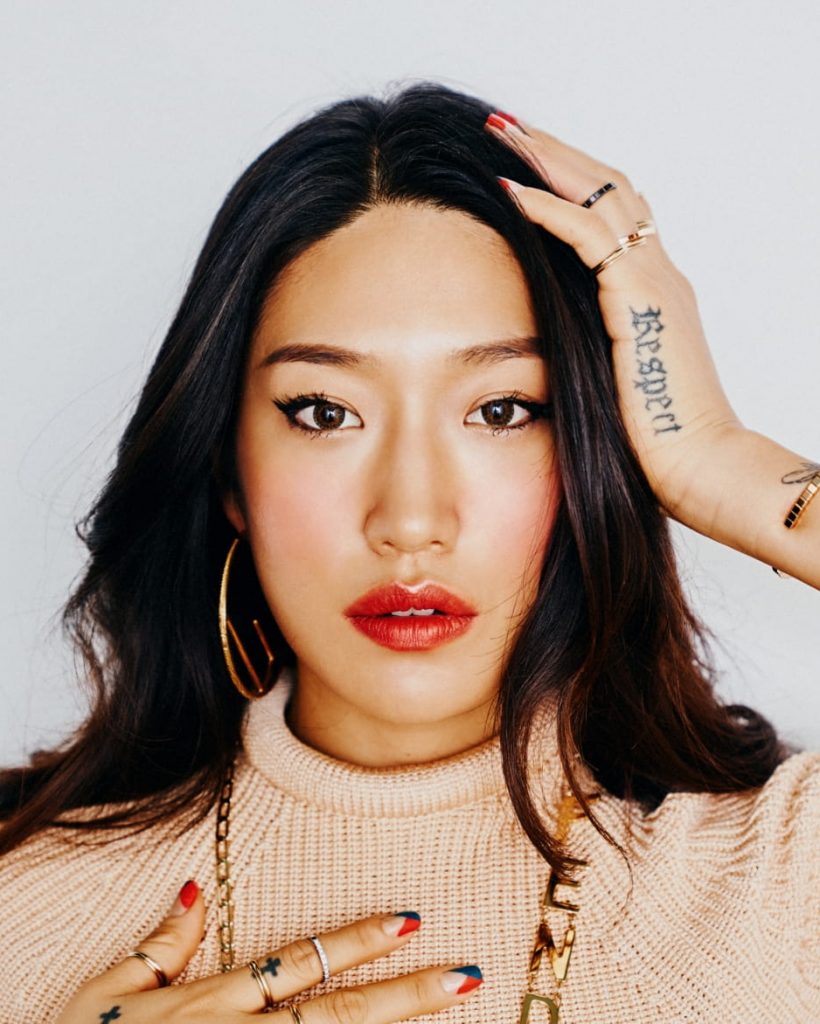 Top; earring; and necklace, all from Fendi. Bracelet; and rings, both from Chopard. Rings, Peggy’s own.

Indeed, fashion is something that comes quite naturally to her (Peggy’s label Kirin, is backed by Off-White operator, New Guards Group). Who else would arrive on set in a simple combo of tailored chessboard-check jacket and denim jeans, and still make it look cool? “I would wear just weird stuff, and never the clothes my mum bought me,” she said nonchalantly. “I’ve always had my own style, and I’ve also always had weird hairstyles … I remember having a really weird hair colour one time, too! I had secretly dyed my hair without my parents knowing, and I told them that it had faded to ‘that’ colour, because I washed my hair with beer,” Peggy confessed, leading to us both laughing at the sheer thought of that scene. “Honestly, just thinking about all the stupid lies I would tell to my parents … I can’t believe I got away with all of it!” And yet, of all the things she still hadn’t gotten away with, is time.

With 2019 being quite a whirlwind year for Peggy (in case her one-night-only appearance in Kuala Lumpur wasn’t indication enough), I had to ask what 2020 has in store for her. “In the new year, I’d like to focus on my album and my live shows,” she said, before mentioning that one of her goals this time around is to take some time off from touring. But such, is the life of a musician. “You can never stop,” Peggy explained, pensively. “I just spoke to one of my mentors, (French DJ Laurent Garnier), and he told me that when you want to detach yourself, you have to really know how to detach yourself.” Call it the curse of the creative mind, unable to put a stop to an endless stream of thoughts and ideas. Nevertheless, therein lies the paradoxical remedy. “Sometimes, we creative people have to do nothing to create something. Right now, I’ve been touring so much, and all I can think about is Netflix and room service!” And just as much, as our own in-room order of truffled fries and chicken soup arrived.

While it’s one thing to be in conversation with Peggy, it’s quite another to see her in action. To my surprise, as our interview drew to a close, she asked if I would be attending her DJ set. “You have to come!” Peggy exclaimed, as I mentioned how I hadn’t managed to grab myself a ticket. “I’m putting you on my list, and I want to see you dance when I play!” Needless to say, that was exactly how my night concluded, having unexpectedly found myself in Peggy’s VIP area, right behind the DJ decks of Petaling Street’s RexKL. An experience like no other, as I twirled and whirled the night away, with Kuala Lumpur’s crowd in a trance to her iconic track, “Starry Night”. A fitting end, in presence of music’s brightest star. 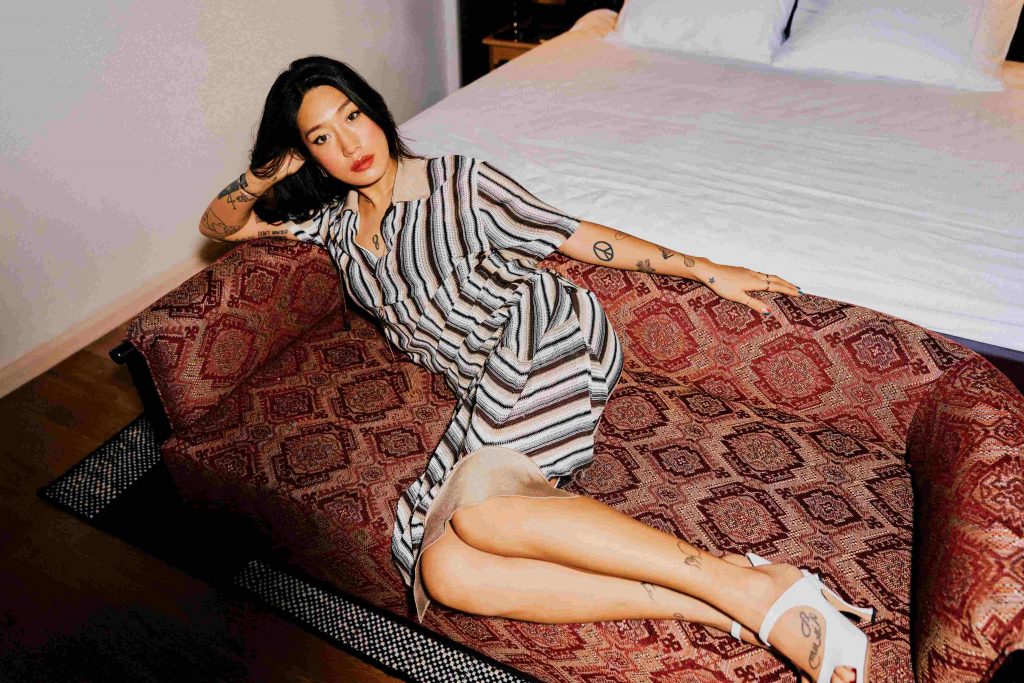 Dress; and heels, both from Bottega Veneta. Necklace; and earring, both from Chopard. Necklace; bracelet; and rings, all Peggy’s own.

Getting up close and personal with @PeggyGou_. BAZAAR caught up with the Berlin-based Korean DJ for one night only before her headlining performance at Circoloco in Kuala Lumpur. Get to know the world’s hottest DJ on the set of our February cover shoot, if you know what’s Gou for you. ⚡️⁣ ⁣ Editor-in-Chief: @Natasha_Kraal⁣ Digital Editor: @ElyzaKhamil⁣ Stylist: @AmyYasmine⁣ Styling Assistant: @MoogsCD⁣ Features Editor: @LlFitton⁣ Videography: @TenPointsUp⁣ Hair: @CkayLiow⁣ Make-Up: @KFBongMakeup⁣ Location: @OrmondHotels