Why luxury brands like Hermès, Iris Van Herpen, and Stella McCartney are turning to mushrooms for an eco-alternative to leather. 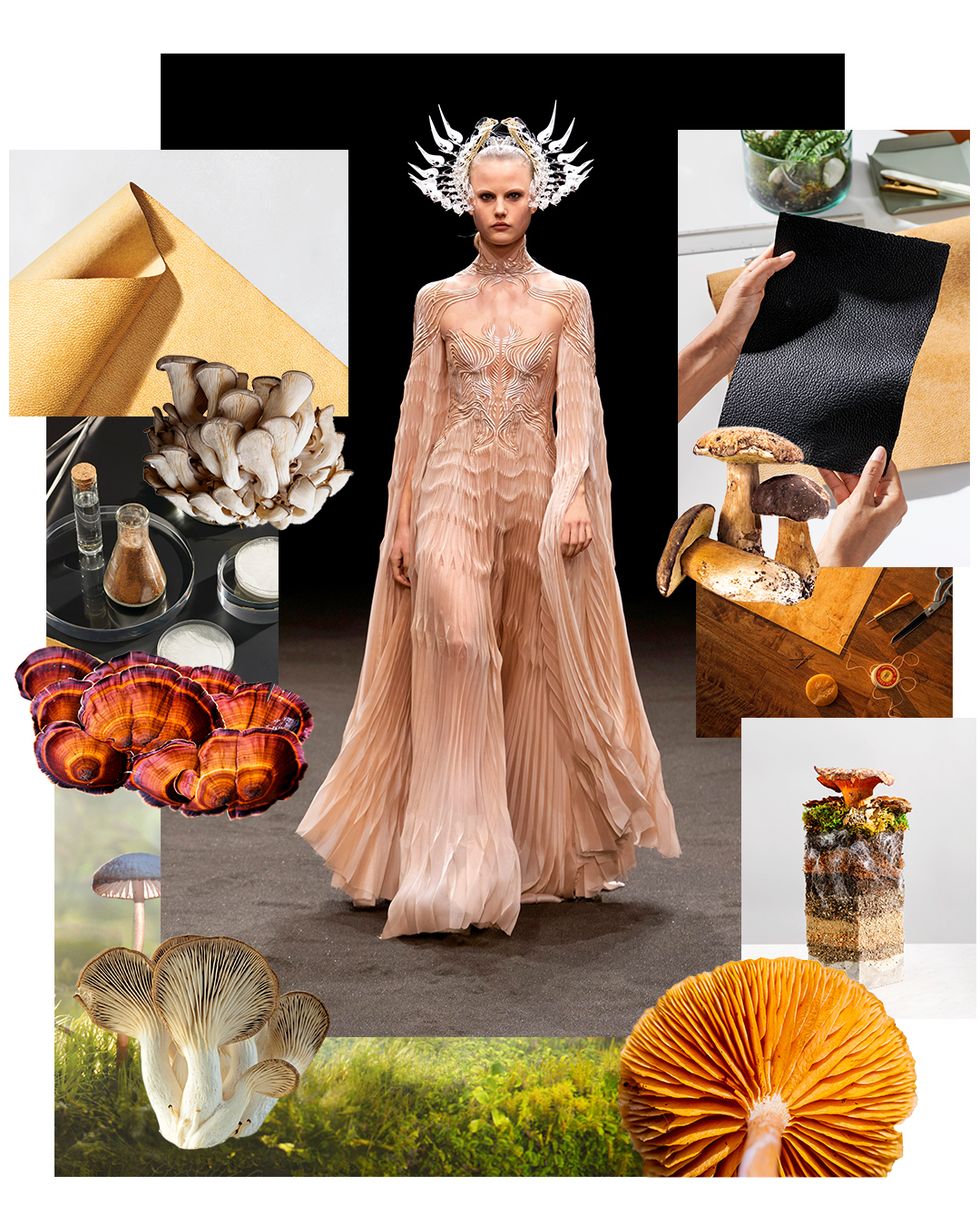 The wondrous fungi-inspired creations in Dutch couture designer Iris Van Herpen’s Spring 2021 collection are like nothing else in the fashion world. Undulating crowns of brass coils top delicate micro-plissé gowns with bodices formed from sinuous silk tendrils. An early adopter of 3-D printing and advocate for sustainability, van Herpen has emerged as a kind of oracle within the fashion industry. She spent lockdown in Amsterdam reading biologist Merlin Sheldrake’s book, Entangled Life: How Fungi Make Our Worlds, Change Our Minds & Shape Our Futures, which describes the hidden world of mycelium, the sprawling underground root-like networks of fungi (the visible part we know as mushrooms are akin to fruit on trees). “It is beautiful to see that within nature there is already this ‘wood wide web’ that shows very strong parallels to our own digital communication systems,” van Herpen says. “During the pandemic there has been a realization of our own fragility on this planet. More and more I started to see couture as a platform for new ideas.”

During the pandemic there has been a realization of our own fragility on this planet. More and more I started to see couture as a platform for new ideas.
— Iris Van Herpen — 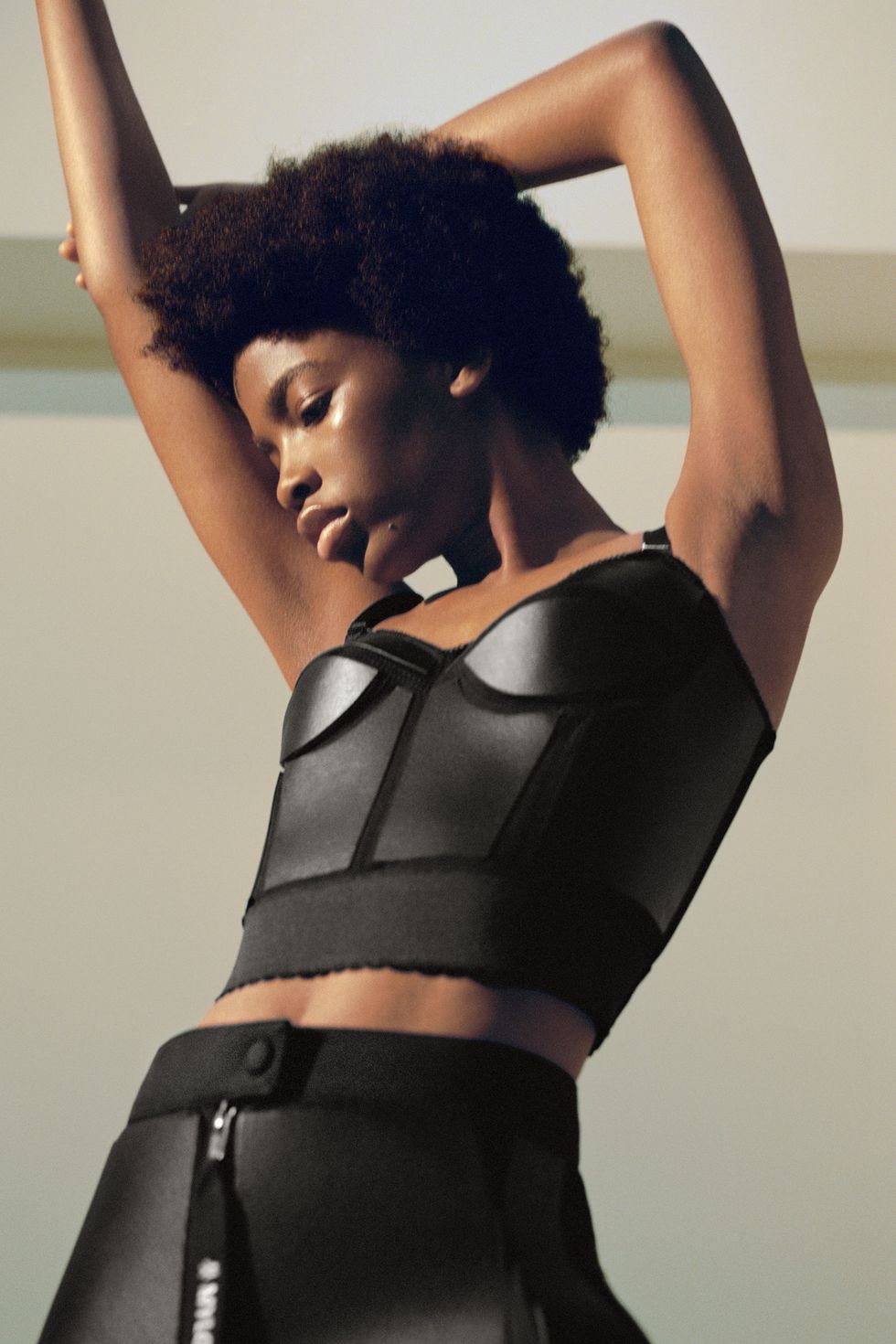 Van Herpen is once again on to something. Across the world in Emeryville, California, a biotech hub in the Bay Area, start-ups MycoWorks and Bolt Threads have captured the imagination of luxury brands with mycelium leather, an environmentally friendly alternative to animal and synthetic leathers. Grown from fungal spawn in less than two weeks, mycelium leather emits fewer greenhouse gases and uses far less water and land resources than does raising livestock to produce animal leather. In fact, since fungi are decomposers and feed on biomass—e.g., dead plants—mycelium leather production is quite literally powered by carbon pulled out of the atmosphere. And unlike many synthetic leathers, mycelium leather doesn’t contain petroleum-based materials such as PVC and polyurethane.

If we can get this right and get a viable alternative to leather, then it can really have a huge impact on the planet.
— Stella McCartney —

More than just an eco-friendly leather alternative, mycelium leather has luxury brands excited because of its remarkable quality. The hand of mycelium leather is so buttery soft and supple that Hermès, known for upholding the most stringent standards with its leather, is already experimenting with it. In March, Hermès and MycoWorks unveiled a sample for the French maison’s Victoria travel bag reimagined with Sylvania, an exclusive amber-hued mycelium leather. MycoWorks, which last year raised $45 million in a Series B financing round from investors including Natalie Portman and John Legend, uses a patented technology called Fine Mycelium to grow a dense mesh of mycelium to precise brand specifications for thickness and softness. “We like to say that our vision as a company is to grow the future of materials,” says MycoWorks CEO Matt Scullin. “It’s engineerable and bespoke.” To that end, Sylvania is finished in France at Hermès’s own tanneries. “MycoWorks’s vision and values echo those of Hermès: a strong fascination with natural raw material and its transformation, a quest for excellence, with the aim of ensuring that objects are put to their best use and that their longevity is maximized,” says Hermès Artistic Director Pierre-Alexis Dumas of the unique partnership. 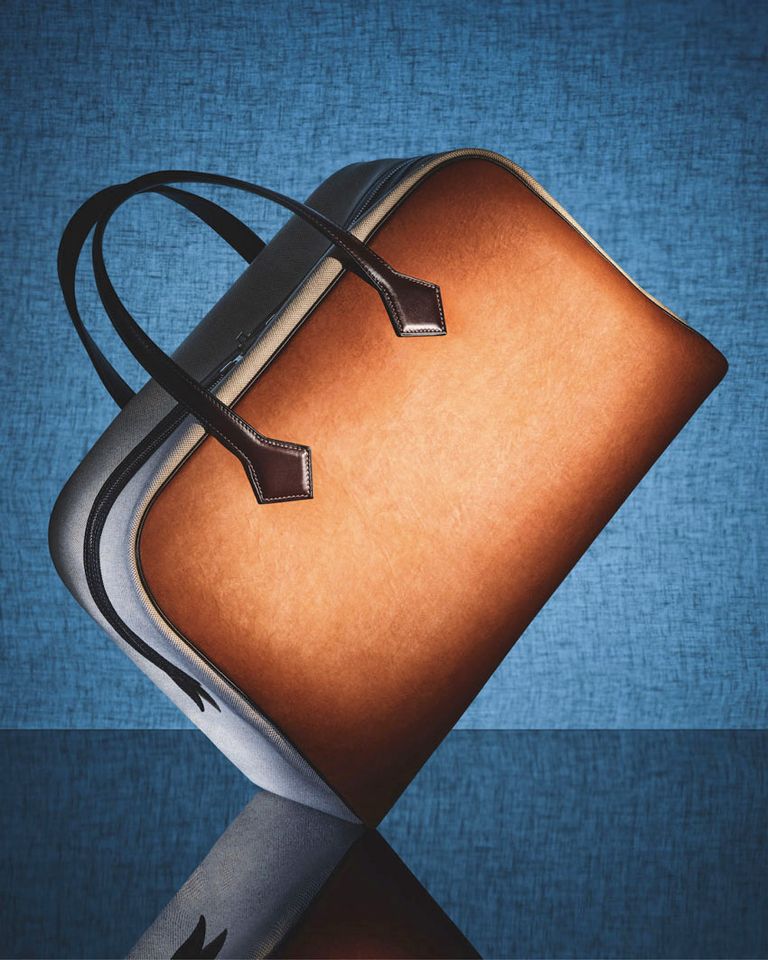 A half-mile from a warehouse holding MycoWorks’s grow trays is the biomaterials company’s main competitor, Bolt Threads. Stella McCartney, the luxury conglomerate Kering, and the sportswear giants Adidas and Lululemon have joined together in a consortium to help Bolt Threads finance the development of a mycelium leather called Mylo. The raw materials of Mylo are similar to Sylvania—a mixture of fungal spawn and what Bolt Threads VP of Product Development Jamie Bainbridge describes as “a secret sauce of agricultural and forest waste”—but Mylo grows as a thick foam that is then compressed, dyed, and finished. McCartney, who over the past two decades has set a high bar for the use of green materials, in March unveiled a prototype for a bustier top and utilitarian trousers handcrafted from Mylo panels laid on recycled nylon scuba. “I have always said that I don’t want anyone to know that the products we sell at Stella McCartney are not leather; they should stand shoulder to shoulder with the real thing,” the designer says. “With Mylo, this is something that is grown in labs, which is truly the future. If we can get this right and get a viable alternative to leather, then it can really have a huge impact on the planet.”

This article originally appeared in the May 2021 issue of Harper’s BAZAAR, available on newsstands now.

This article appeared on harpersbazaar.com