The late designer was a lifelong activist, most importantly in the field of feminist fashion. 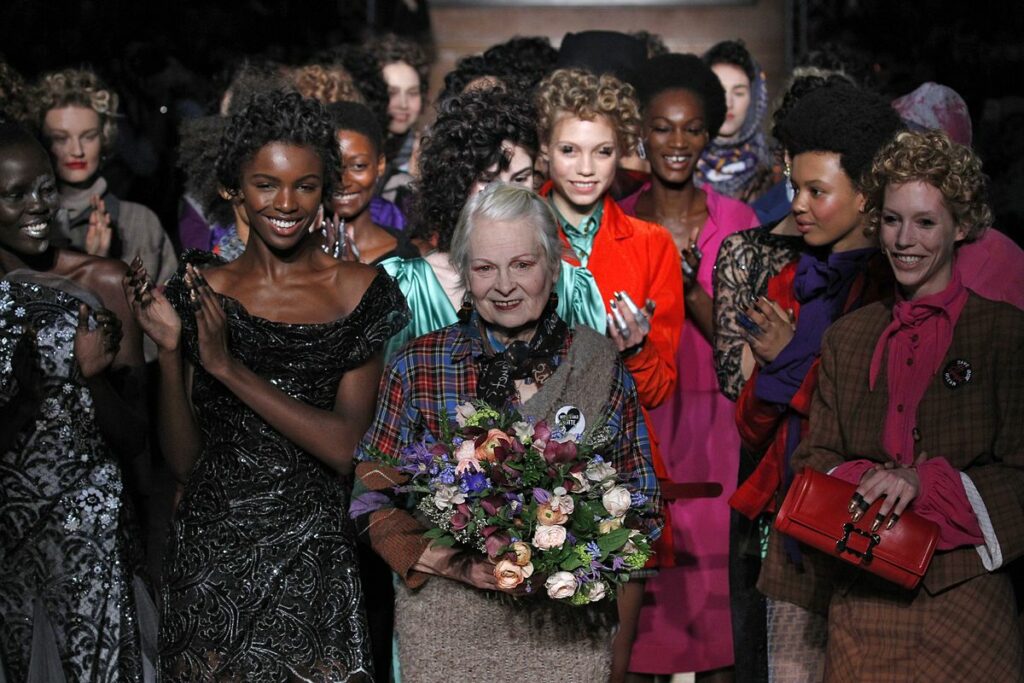 Vivienne Westwood, the yellow-haired, red-lipped iconoclast who jolted fashion forward into the statement-making era of punk music, died at the age of 81 in London, surrounded by family and friends.. Confrontational, political, environmentally outraged (often to the point of eccentricity), Westwood was always outspoken, always original, and never afraid to spit on our assumptions.

Westwood’s fashion career was a singular one, in part because of the longevity, but mostly because of the longevity of her influence. In the ’70s, she, along with Malcolm McLaren, architected fashion into a platform for activism through their boutique and clothing brand SEX. Inthe ’80s, she plunged into fashion’s mainstream with twinsets and skirt suits that mocked the upper-class (and whose attitude foreshadowed the nihilism of the 1990s); and in the 1990s and 2000s, her expertly cut, romantic dresses became go-to wedding gowns and celebrity red carpet garb. Her ruby-tipped fingerprints are on designers from John Galliano, Alexander McQueen, and Martin Margiela to the emerging generation of talent including Glenn Martens, Matty Bovan, and Nensi Dojaka.

Even today, her positions are hardline, confrontational. The press release announcing her death also shared a statement Westwood made shortly before she died, which was typically acidic: “Julian Assange is a hero and has been treated atrociously by the UK government. Capitalism is a crime. It is the root cause of war, climate change, and corruption.”

Over the past decade, Westwood became a hero to Gen Z fashion fans, who made her corsets into one of the archival fashion movement’s most collectible garments. Prices for the corsets range from $2,000 to upwards of $6,000 for the most coveted examples with runway pedigree. Even in her later years, when her former student and husband Andreas Kronthaler was spearheading her eponymous brand, she happily perched in the front row of her own shows, where the language she created—cheeky, history-obsessed shapes fused with an interest in global costumes—was always evident. Last March, she glided onstage at her show’s finale to accept a bouquet from Bella Hadid, who closed the show. 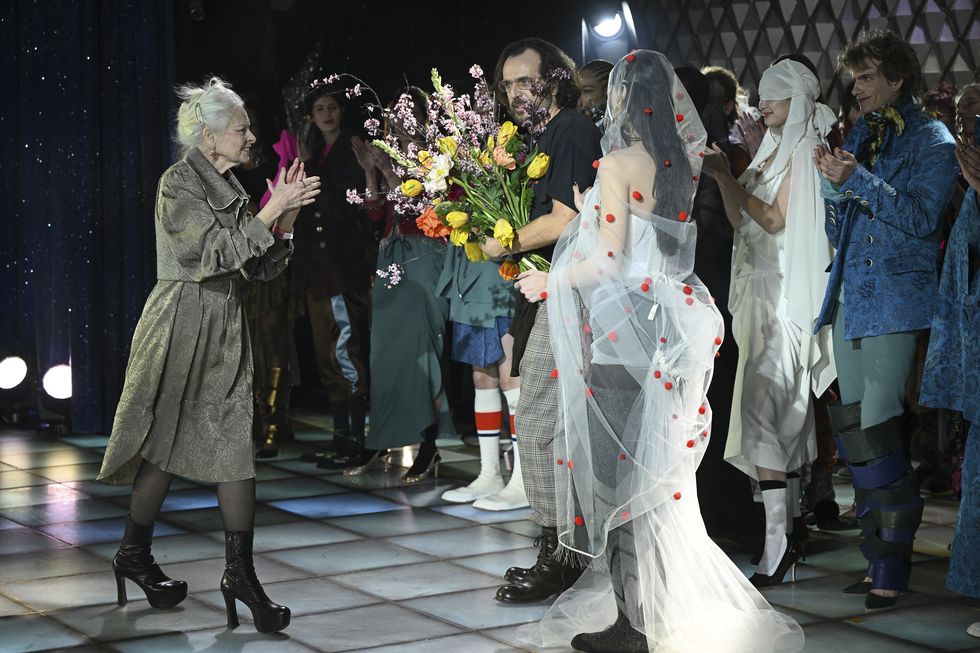 Westwood had the rebel streak from her earliest years. Raised in a working class background, she dropped out of art school and became a teacher, figuring there was no way for her to make a living as an artist. After an early marriage that resulted in one child (and gave her the last name “Westwood”), she met McLaren, with whom she would launch a London clothing store that went through several names and themes—Teddy Boy, rockabilly—before the pair landed on the ingeniously straightforward “SEX.” The store became both a clubhouse and an incubator for London’s punk movement. The Sex Pistols—which McLaren founded after visiting New York and discovering raw, thumb-in-your-eye bands like Television and The Ramones—were named to help advertise the store. The commercial hawk eye Westwood and McLaren always had on their endeavors complicates the common complaint that punk was somehow corrupted by attempts to capitalize on its appeal, and which have dogged the genre from the time McLaren created the Sex Pistols to the 2013 Met Museum Costume Institute exhibition honoring punk’s contributions to fashion.

SEX marked the first project where Westwood would show her ability as, if not a soothsayer, then a woman consistently ahead of her time. Her instinct that fashion could be political, even a platform for social change and outrage, presaged the mindset of what’s now called streetwear, where fashion is not a subculture—as it was in the ateliers of Paris couturiers who still ruled fashion when Westwood emerged—but a facet of popular culture itself. She and McLaren, her co-designer, were also early champions of the graphic T-shirt,putting queer illustrator Jim French’s lascivious “Two Cowboys” on a thin, ragged-edge jersey T-shirt, anda woman’s account of rape in neat cursive on a similarly filmy cotton tee. The store sold fetish wear like harnesses and patent-leather shoes to sex workers and aspiring musicians, creating a feedback loop of influence, as they dared musicians to adapt their wares and the musicians dared them to take their clothes even further. One of their most fantastical creations wasa twill cotton shirt covered in straps that suggested a parachute or a straightjacket, and featured a portrait of Karl Marx. It became an unlikely phenomenon: designers from Martin Margiela to Rei Kawakubo to Shayne Oliver to Rick Owens have made homages to the piece.

In the 1980s, Westwood migrated to fashion’s mainstream, though this shift had the effect of making her more influential, rather than a sellout. In class-paranoid England, she took uniforms of the well-off, from the buckled pumps and waistcoats worn by bewigged men in the 18th century, to the wasp-waisted gowns and corsets that dotted 19th century ballrooms, and made them into something ludicrous they were cool. (Her partnership with McLaren ended in the middle of this decade.) In 1985, she introduced a tiny but comically circumferential miniskirt she called the “mini crini,” adding the bushy layers of crinoline (hence the “crini”) that propped up women’s lengthy ballgowns in past centuries under the sexy puniness of the miniskirt. Those skirts, even today, look like a parody of our expectations of propriety and sexiness, and how those two qualities are rarely expected to meet. They were widely copied (and de-politicized) by more popular designers, most notably Christopher Lacroix. By the end of that decade, the poufy miniskirt was seen as an emblem of the silliness of the decade’s capitalist excesses, an evolution that surely made Westwood raise her eyebrows with glee. 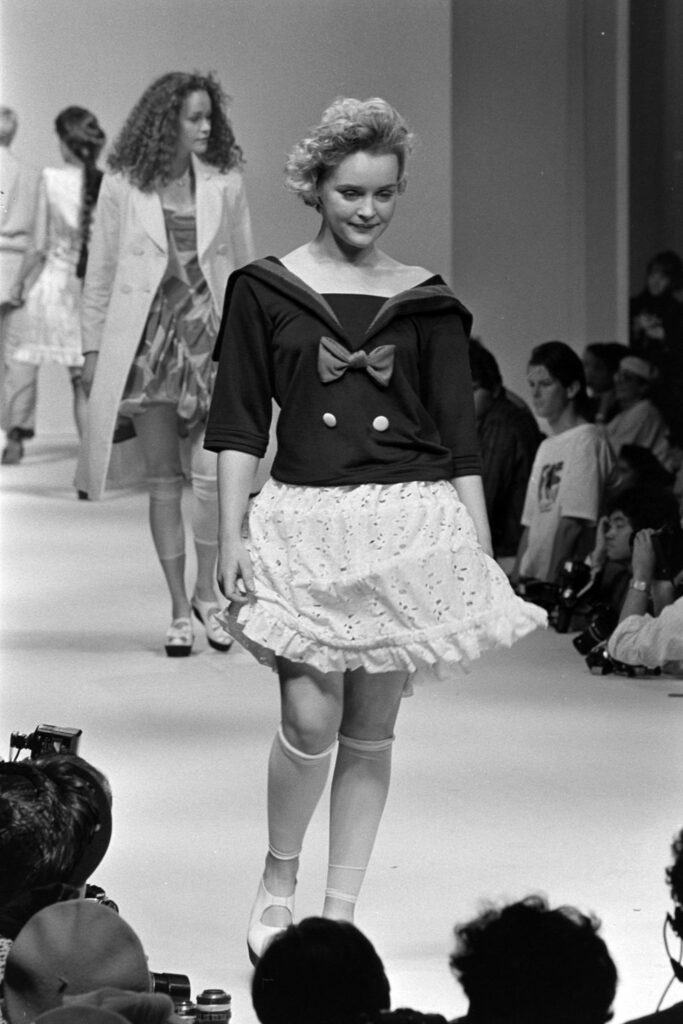 In the 1990s, Westwood continued to plunder English fashion history to snarling effect. She took tartans and mutton-leg sleeve jackets and tacked on sassy bustles that seemed nonsensical and foolish until the model spun around on the runway, and the bunch fabric suddenly emphasized her erotic wiggle. This was the decade in which she reclaimed the corset, challenging the view of feminists and fashion historians that the undergarment was a tool for oppression, a contraption that squeezed women into creatures who moved bust-first. In Westwood’s hands, it was outerwear, rather than a secret weapon of female pain hidden behind a blouse or dress, and she used flexible fabrics rather than stiff boning to make it more comfortable. She printed a number of paintings from London’s Wallace Collection on the pieces, turning them into decorative canvases meant to be shown off as an instrument for liberation. She seemed to love the idea that a woman was welcome to squeeze or sculpt or mutate her body with clothes or shoes if she made the choice to do so. The famous photograph of Naomi Campbell falling on the runway in ridiculous platforms and laughing is from Westwood’s Fall 1993 show. The previous season, in a show titled Cafe Society, Westwood sent out Kate Moss in a striped micro-miniskirt with her arm draped over her naked breasts as she licked a dripping bar of Magnum ice cream. (A version of the skirt is available on 1stDibs for nearly $4,000.) The audience applauded. It’s hard to imagine any female designer doing this today without controversy (or even wanting to!). But her dedication to making daring statements however they were received is what made her an exceptional fashion talent.

Whereas most designers who came to prominence in the 1970s or ’80s had faded by the mid-2000s, Westwood remained a staple. Who can forget Gwen Stefani fantasizing in her 2004 hit “Rich Girl”: Clean out Vivenne Westwood, in my Galliano gown…? Stars like Jennifer Aniston, Kim Kardashian, and Dita Von Teese have worn her gowns with their artfully-draped busts.

Westwood was a lifelong activist, and her unapologetic positions were sometimes seen as outlandish, especially in her later years. (The New York Times publisheda bone-dry account of one of her protests in support of Assange in 2021.) As consumers and climate activists have become more knowledgeable about how the global supply chain and synthetic fabrics derived from chemicals created environmental waste, Westwood was often criticized for producing her clothes in China with plastics and polyester. Close followers of high fashion Twitter and the TikTok commentariat know that younger fashion followers are a house divided on Westwood; is she a significant rebel, or someone who played it both ways, protesting environmental catastrophe while participating in the fashion system’s excesses? Nonetheless, her work from the past three decades is beloved by Gen Zers spearheading the archival fashion movement, and her death is sure to enhance the collectability of her vast contributions to the history of fashion.

And that is perhaps how she will be best remembered, once any dust settles around the validity of her political positions. Even today, the fashion industry is populated by too few female designers, and Westwood’s work throughout her career was consistently significant for its outrageous statements on how the female body was trussed up, theorized, or politicized. The T-shirts screen printed with breasts that she and McLaren sold at SEX, or the corsets she made two decades later, seemed to curl their lip and bark, I know what you’re thinking. She had an obsessive, magic relationship with the history of fashion, taking up familiar costumes with all their semiotic hooha, and lampooning them into commentary on the way we see ourselves, and doggedly insisting that no article of clothing has some “fixed” meaning we all share. Instead, her work suggested, a designer’s job is to constantly add to, and most of all complicate, our presumptions about style and identity and clothes, reinterpreting and recontextualizing garments. This is also what made her a true original: she raged against the status quo while also delighting in the beauty of historic costume. And she could do this with delighted tension because she seemed not to view the creation of art and clothing as the tug between creating something new and upholding tradition. Instead, she ran at what seemed nonnegotiable—bustles, corsets, frock coats, and even what words were appropriate to put on a T-shirt—with sizzling sticks of dynamite, and applied them with a couturier’s touch.