10 Things Well-behaved Guests Always Do At Christmas Parties, According To Etiquette Bible Debrett’s 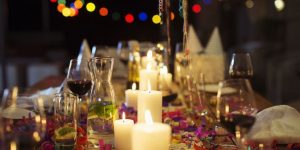 Christmas, the season of spirits, sequins and soirees, is here and, although the socialite’s favourite month is a lot of fun, Christmas dinner party etiquette can, for some, elicit fear instead of festive spirit.

To help us avoid any festive faux pas, Debrett’s – the bastion of British manners – has teamed up with Sainsbury’s to produce a guide detailing exactly what one should (and should certainly not) do during festive soirees…

First thing’s first: guests should always bring a gift. Chocolate or wine are customary but if you’re staying over for the whole holiday, consider something slightly more substantial.

We’ve all done it – wrapping up an unwanted gift and passing it off as our own. Unfortunately, a re-gifted present just won’t cut the mustard when it comes to good gift-giving etiquette. Splash out and buy them their own biscuits, luxury oils or box of chocolates, says Debrett’s.

To instantly alleviate an item from practical contribution to thoughtful gesture, wrap it up. Just make sure you use recyclable paper for extra green credentials.

A text, says Debrett’s, is most certainly not an adequate way to express thanks to a generous host. Taking the time to write a thank you letter will reinforce your gratitude, and show you care. If you’ve lost your pen or this isn’t possible, give the host a call to thank them instead. Digital thanks, they reluctantly admit however, are better than no thanks at all.

Sweet treats are always a failsafe present… or so we thought. Actually, Debrett’s points out, Christmas doesn’t mean a free-for-all on confectionary for everyone. It’s polite to check with parents before unloading sweets on their children.

6. You can’t go wrong with a bottle of booze

That’s a Debrett’s motto. Do make sure you put some thought into your choice though. Festive spirits like port, advocat or sloe gin bring a seasonal flourish and are a fun alternative to wine or whiskey.

7. Just don’t expect to try it yourself..

Three quarters of Brits would expect to drink the same bottle of wine they bring to a party, but according to Debrett’s, it is the host’s decision to do so (or not do so) and guests mustn’t feel offended either way. Moral of the story: don’t cry over unserved wine.

If you’re attending a dinner party and really want to show off, you could ask the host what they’re cooking and find a wine to complement the meal.

Cooking a full Christmas meal for 14 people is no easy feat, so your host may appreciate an edible offering to help ease the burden. To really win the Best Guest award, you should ask the host beforehand what would be most useful, so you don’t end up duplicating dishes or inadvertently offending anyone.

Presents? At Christmas? Groundbreaking. Do you really need to tell the world you received another gift? No, according to Debrett’s, you don’t. Posting pictures of your present haul will make you appear smug and could also risk outing a re-gifter. Never a good idea.