Inside The Elite Weight Loss Camp For Wealthy Women

At the Golden Door Luxury Resort and Spa, the rich and famous decamp for a week of high-priced pampering and rigorous dieting to detox—and do nothing but focus on themselves. 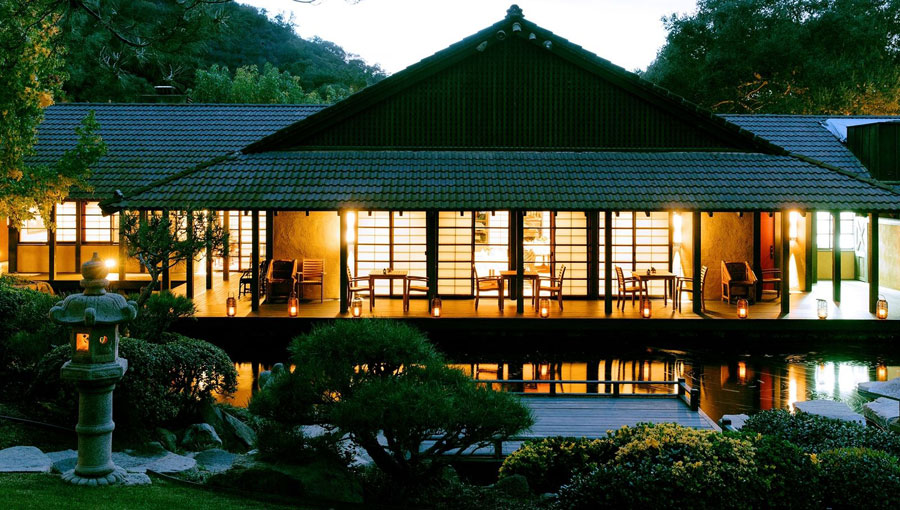 Past the ornate, glistening entryway of the Golden Door Luxury Resort and Spa, a Beverly Hills socialite and her grown daughter are checking in. They’re hoping to reconnect with each other, they admit with a smile behind oversized sunglasses. Behind them, a new divorcee tells me she’s mourning the end of her marriage; her life had been “tumultuous” of late and she “needed to find purpose again.” A few steps away, an embarrassed Fortune 500 CEO who had never learned to swim is requesting a swim instructor be brought in to give her private lessons daily.

Ultimately, though, we are all here for the same reason: to lose weight, detox, step out of our frenzied lives and focus on ourselves. 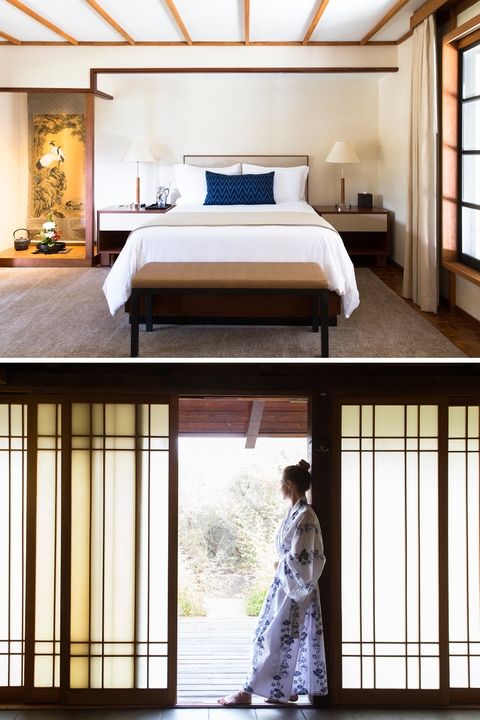 Nestled in the hills above Escondido, Golden Door is where the rich, famous and celebrated decamp for a week of high-priced pampering, rigorous dieting and privacy at a retreat so exclusive that guests are told not to pack a bag, because everything will be provided. But more than simply being a respite from everyday life, those fortunate enough to spend the requisite four -to -seven days here leave armed with a wealth of knowledge about how to eat, exercise and tread more lightly on the earth back in the real world.

Lured by that seemingly impossible ideal, I signed up for the resort’s four-day retreat where, for nearly $7,000, I would be fed 1,200 calories a day (no wine!), and would exercise for 20 hours total through a variation of yoga, dance, cardio and pool exercises.

Make no mistake, this would not be a trip to Weight Watchers—that much was apparent once I reached the palace-like retreat. My first task? Take a moment of reflection as I crossed over the curved wooden bridge leading to the reception area, while my handler, a friendly and soft-spoken woman name Katie, paraphrased a Japanese saying that states: “Only your troubles can follow you through a straight and narrow line. The turn in the bridge allows you to leave your problems there. Everything after is a new beginning.”

I was given fresh workout clothes in my size for each day, along with a Golden Door tote bag at the foot of my bed containing a paper fan on which was written the day’s suggested exercises and activities: a 5:45 a.m. hike and four exercise classes throughout the day, all of which had been customized. 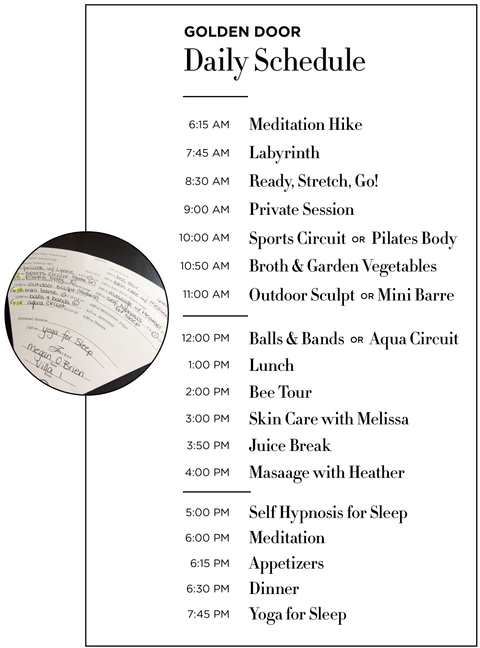 I would have been forgiven for being intimidated by the calibre of women I would be spending the next four days with, but it turns out that seeking a more healthful life is a great equalizer. On our first hike the next day, we were all wearing our matching outfits as we trudged quietly down a misty pre-dawn path. It didn’t matter that I wasn’t among the one percent. We moved at our own pace, each one of us instructed to leave around 100 feet of space from the next person. The silence felt necessary. We stopped at the top of the mountain as the sun fully rose across the horizon, and were led through a 30-minute tai chi session; a clutch of us bowing our heads gracefully to the gathering sun.

Back at the retreat, we stopped at a place the Golden Door calls its “labyrinth,” where we were instructed to “let go of what was holding us back” using breath-work and visualization. Around me, those powerful, affluent, in-control women wept, each one shedding tears of pent-up sadness. The labyrinth, we were told, represents a spiritual journey with numerous twists and turns. It doesn’t matter how you walk through it, as long as you find its center—its own metaphor for life.

And then, finally, breakfast. I was afraid I would be given a piece of lettuce with a lemon wedge and sent on my way—that the gifts delivered by the retreat’s free-range hens roaming the property, or the extensive organic vegetable garden and its world-class chef, would not be for me. But instead, I was presented with a savory herb and cheese egg Benedict with ricotta and farina cake. It was delicious. I did not leave the meal overstuffed, but was surprisingly full. Here, I witnessed the power of portion control.

The retreat, which recently finished an extensive $15 million renovation and acquired an additional 200 rolling acres to help preserve the privacy of the location, is set to celebrate its 60th anniversary next year. Though it retains the exclusive aura of its earliest days—Oprah Winfrey and Barbra Streisand are avowed fans—it is increasingly appealing to conscious, well-heeled millennials (and their conscious, well-heeled parents) with on-trend offerings like daily mindfulness training and Michelin-equivalent farm-to-table fare.

The women I met here could have jetted off to any retreat anywhere in the world. Instead they chose Golden Door, many for the umpteenth time. (One woman, Susan, was on her 78th visit.) “When you get here, you’re free to be yourself,” offered Kathy Van Ness, general manager of the retreat. “The camaraderie and support happens naturally. This is not just a spa. It’s more than that. This is a place where people have the ability to transform.” 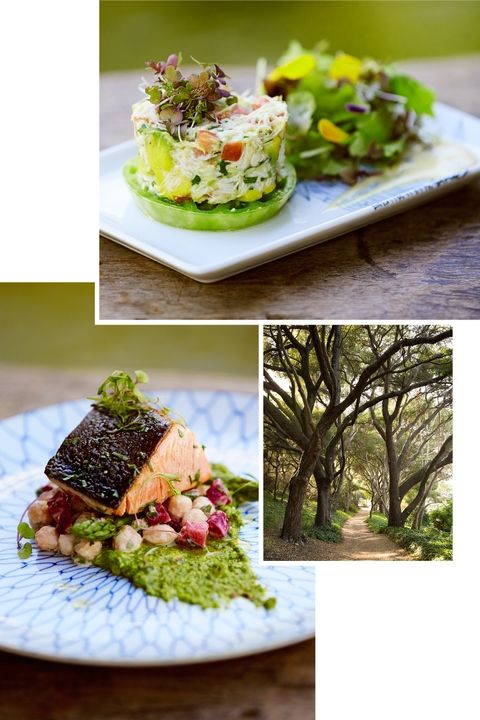 I told Van Ness that I, too, needed to transform—back into a size four. I committed to 1,200 calories a day, which, in conjunction with the prescribed five hours of working out every day, would help me shed some weight before I went home.

That said, Golden Door is not boot camp. I was not beholden to join in if I didn’t want to. I could ditch circuit training to sit and paint for an hour, or write haiku. But I knew that dallying in the arts wasn’t going to get me back into my skinny jeans. I was here on serious business.

To my surprise, the meals, doled out in perfect and well-thought-out quantities, sustained my energy for the entire day. There was a broth snack around 10 a.m. and trays of oranges if we felt peckish. Would I have enjoyed my nightly Pinot and some lavishly buttered bread? Of course. But that’s what got me here in the first place. The option to meet with a Golden Door nutritionist and learn how to duplicate their meals is also available. The spa’s prosciutto-wrapped asparagus is fantastic and has exactly three ingredients. There’s a cookbook to show you how.

With so much focus on exercise anyway, it was hard to think about food. By the end of the first day, I had done a private training session with Lynne, a sport circuit class for 45 minutes and water aerobics in the pool. Later in the afternoon, I met back up with my friend Aly and we attended Bollywood Dance Class. Our Indian instructor handed us saris to wear as she taught us how to roll our hips and wave our arms like we were in some new Mumbai musical. I skipped the evening’s “Yoga For Sleep” class. I didn’t need it, I was exhausted and drifted off soundly by 9:30 p.m.

“Here, I witnessed the power of portion control.”

One of Golden Door’s main aims for its guests is to foster mindfulness. Signs around the property state: “A calm awareness of guests’ bodies, feelings and minds, so that you may find contentment, leading to a life well lived.” Yet there was nothing cultish about this place. Nobody discussed religion. All of the mindfulness exercises were based on finding inner strength.

As someone who is skeptical of just about everything, the ease of which I took to the meditation and mindfulness exercises surprised me. By day two, I was feeling grounded and calm. Even though I exercised four hours a day, I leapt out of bed each morning without any soreness. I was eating clean and lean, but was not hungry. I enjoyed the “mandatory” in-room massages, and at the first sign of tension I could have my body wrapped from head-to-toe, have a facial or deep-conditioning if I wanted. But it wasn’t the pampering that was blissful. It was the solitude, being able to sit with my thoughts and reflect on my choices. It was a happy byproduct of what I had originally come here for.

I was uneasy before stepping on the scale the day before checking out. Had I lost that five pounds in these four days?

Our final night’s dinner had all the women around a long, communal table, where everyone shared what they were grateful for. It was like Thanksgiving but without the stuffing, turkey or pie. We were given the choice of wine but I was so inspired from seeing the scale drop, I stuck with water. I was moved listening to the impact Golden Door had had on these women: the CEO was putting her head under water and starting to swim. The daughter raised a glass to her mother and said she had never felt closer to her. The divorcee in turmoil said she was done mourning. Susan pledged to return for visit 79.

Two weeks later, I’m still down seven pounds and going to the gym every day. The best part? The Golden Door Foundation donates 100 percent of its net profits to charities across the world, many dedicated to helping abused and disadvantaged children. Transformative indeed.